The Light, the Dark, and the Dusty

Explanation: This colorful skyscape spans about two full moons across nebula rich starfields along the plane of our Milky Way Galaxy in the royal northern constellation Cepheus. Near the edge of the region's massive molecular cloud some 2,400 light-years away, bright reddish emission region Sharpless (Sh) 155 is below and right of center, also known as the Cave Nebula. About 10 light-years across the cosmic cave's bright walls of gas are ionized by ultraviolet light from the hot young stars around it. Dusty blue reflection nebulae, like vdB 155 at upper left, and dense obscuring clouds of dust also abound on the interstellar canvas. Astronomical explorations have revealed other dramatic signs of star formation, including the bright red fleck of Herbig-Haro (HH) 168. Near top center in the frame, the Herbig-Haro object emission is generated by energetic jets from a newborn star.

Yesterday's was M33...so last night I went out and got it...not very good...but check it out in the cafe...it is the center area with my Celestron Evolution 6. 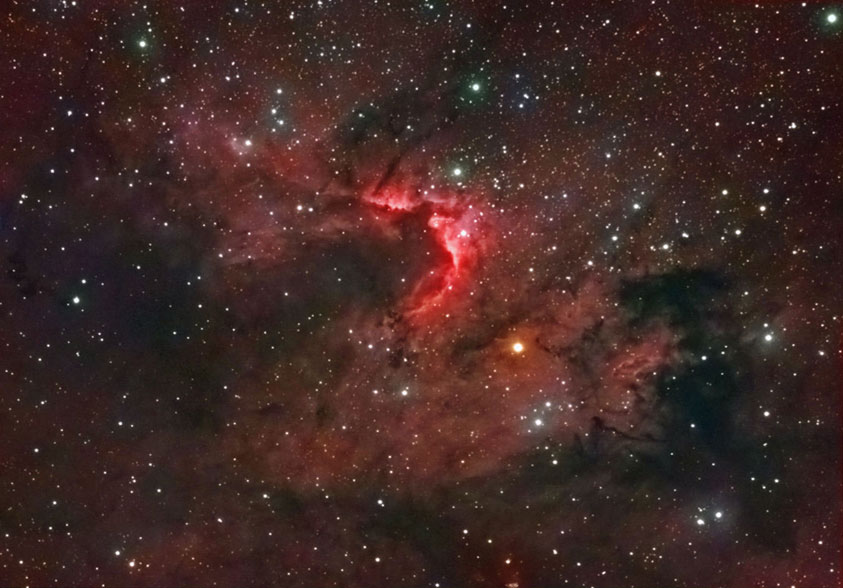 The Cave Nebula. Photo: Mark Sibole.
I've sometimes tried to make head of tail of the Cave Nebula, but previously I have given up, because I haven't understood how it works. But now I think we are looking at an ionization front, although we can't see an obvious newborn cluster of stars that is causing the ionization. But I have begun to think that maybe HD 217086, a seemingly slightly lonely O7-type star, is the true power engine of the Cave Nebula.

There is actually one more O-type star in this picture, and that is the brightest of the bluish-looking stars to the lower right of the bright orange star in the middle of the picture. This other O-type star is HD 216898, an O8.5V-type star. This star may ionize the fainter part of the red ionization front, the part of it that is facing its way.

What about the prominent orange star close to the center of the image? I'd say that this is the Betelgeuse of the Cave Nebula, a red giant that started out as a blue star hot enough to blow a cavity around itself and ionize the remaining gases.

So the fact that this star seems to sit in the center of a cleared-out cavity is probably no coincidence. This star, HD 216945, may have been the one that got the nebula going in the first place. But now this star has swollen into a cool red giant, and it can't do any ionizing any more. The blue stars HD 217986 and KZ Cep must be the second generation of hot bright stars in this nebula, opening up new ionization fronts here. And HD 217061 may be the third generation here.

And we can already see yet another star emerging from the dust inside the red glow of hydrogen.

Not that it matters greatly, but I notice a wording change this time, from APOD's usual "toward the constellation" to the traditional "in...." Am I the only one that finds the former wording somewhat awkward, and prefers the latter?
Top

Bellerophon wrote: ↑
Fri Sep 28, 2018 3:50 pm
Not that it matters greatly, but I notice a wording change this time, from APOD's usual "toward the constellation" to the traditional "in...." Am I the only one that finds the former wording somewhat awkward, and prefers the latter?

You are not. "In" is by far the better choice.
Chris