Orion in Red and Blue

Explanation: When did Orion become so flashy? This colorful rendition of part of the constellation of Orion comes from red light emitted by hydrogen and sulfur (SII), and blue-green light emitted by oxygen (OIII). Hues on the featured image were then digitally reassigned to be indicative of their elemental origins -- but also striking to the human eye. The breathtaking composite was painstakingly composed from hundreds of images which took nearly 200 hours to collect. Pictured, Barnard's Loop, across the image bottom, appears to cradle interstellar constructs including the intricate Orion Nebula seen just right of center. The Flame Nebula can also be quickly located, but it takes a careful eye to identify the slight indentation of the dark Horsehead Nebula. As to Orion's flashiness -- a leading explanation for the origin of Barnard's Loop is a supernova blast that occurred about two million years ago.

Ok...so basically 2 million years ago was a SN. That has now dissipated into the large "loop", and we see much of the constellation of Orion and DSOs "FRAMED" by the supernova remnant because it is much closer but appears to be huge because of the perspective....

I thought it was just a part of the Complex...but I guess not...need to read more about my favorite region of space...

This one really pops! Love the red, with just enough blue for pleasing contrast.
Just as zero is not equal to infinity, everything coming from nothing is illogical.
Top

Well, I can't complain about the level of color saturation of this image, can I?

Or, more interestingly, the smoothness of the red curtains behind Sigma Orionis, the multiple star above the Horsehead, versus the chaos and turbulence of broken ghostly reddish pillars above and below the Orion Nebula.

Or the startling black emptiness in Barnard's Loop at about 2 o'clock, which looks a bit like a gaping mouth.

Or the beautifully detailed M78 at about 9 o'clock, surrounded by a lovely necklace of stars.

Or the apparent little "man" sitting on a red raft or tongue of nebulosity on the opposite side of Barnard's Loop from M78, at about 7 o'clock.

Or the various faces and figures and trolls and birds that I can spot in the chaotic shapes below the Horsehead Nebula. Pareidolia anyone?

I have two complaints. I don't much like the green color of many of the bright blue stars in this picture, such as Alnilam and Mintaka in Orion's Belt. And speaking of Orion's Belt, Alnitak is really hard to spot here.

https://en.wikipedia.org/wiki/Orion_(mythology) wrote:
<<The ancient sources for Orion's legend are mostly notes in the margins of ancient poets. The margin of the Empress Eudocia's copy of the Iliad has a note summarizing a Hellenistic poet who tells a story of Orion's birth. Here the gods Zeus, Hermes, and Poseidon come to visit Hyrieus of Tanagra, who roasts a whole bull for them. When they offer him a favor, he asks for the birth of sons. The gods take the oxhide and ejaculate or urinate into it and bury it in the earth, then tell him to dig it up ten months later. When he does, he finds Orion; this explains why Orion is earthborn. In the 14th century, Boccaccio interpreted the oxhide story as representing human conception; the hide is the womb, Neptune the moisture of semen, Jupiter its heat, and Mercury the female coldness; he also explained Orion's death at the hands of the moon-goddess as the Moon producing winter storms. According to Aratus, Orion attacks Artemis while hunting on Chios, and the Scorpion kills him there. Most versions of the story that continue after Orion's death tell of the gods raising Orion and the Scorpion to the stars.>>

Why does the blue in the uper part of the picture differ from the blue green below and to the right of it.

The blue green is identified as Hydrogen and Sulfur (SII+) which doesn't make sense to me (but I don't have access to the spectra.

ernvl@yahoo.com wrote: ↑Sun Oct 14, 2018 8:41 pm Why does the blue in the uper part of the picture differ from the blue green below and to the right of it.

The blue green is identified as Hydrogen and Sulfur (SII+) which doesn't make sense to me (but I don't have access to the spectra. 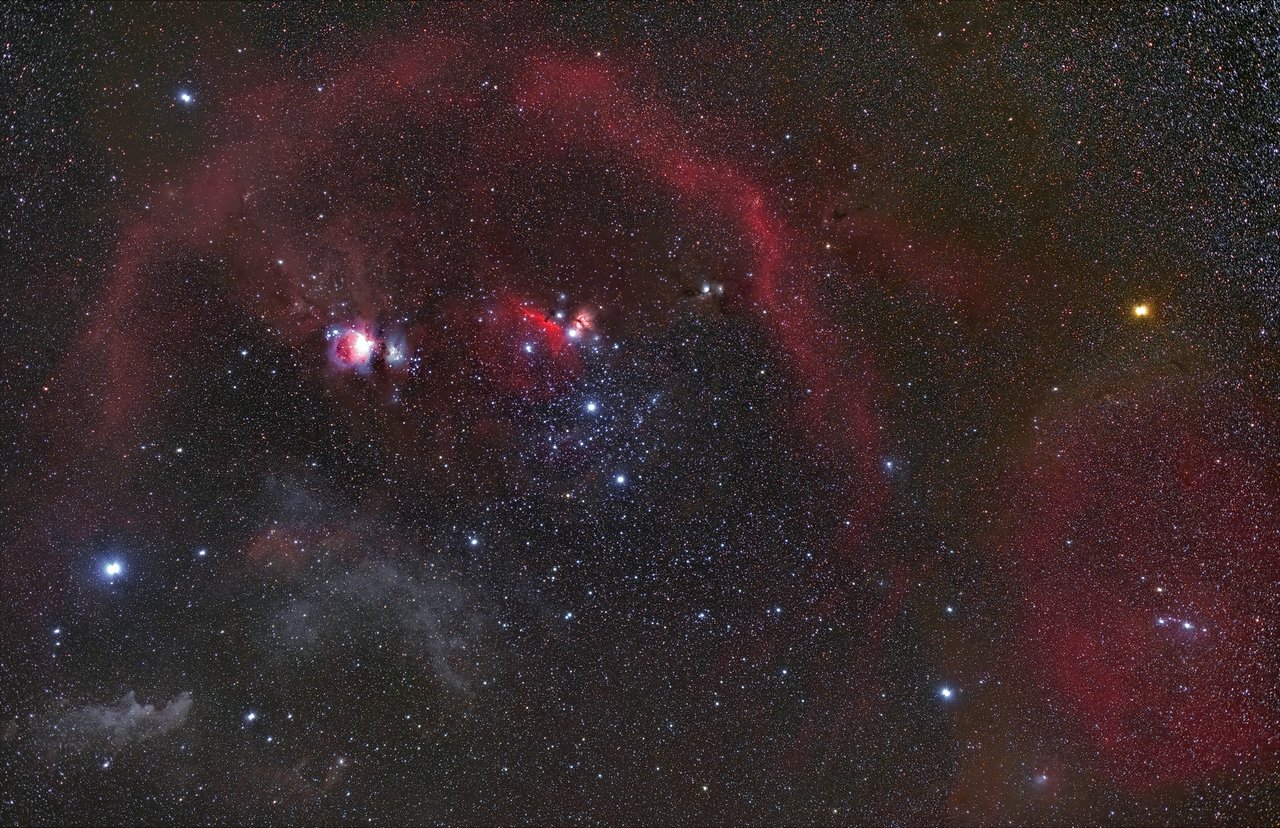 Orion Constellation. Credit: Zdeněk Bardon/ESO
Take a look at the picture at left, where the colors are not nearly as saturated as they are in the APOD. You can see, nevertheless, that there is a lot of low-level (almost brownish-looking) hydrogen alpha light surrounding the Ortion Nebula (at left). You can also see that the brightest part of the Orion Nebula itself looks white, and the somewhat less bright part of it (at left) looks red, and even farther to the left is a blue border. (The bluish blotch to the right of the Orion Nebula is the Running Man nebula.)

The blue border surrounding the Orion Nebula would be blue reflection nebulosity, where light from the hot blue stars in the Orion Nebula is reflected in the dust in the outskirts of it. Why don't we see reflected blue light closer to the Trapezium, the innermost part of the Orion Nebula? Probably because the blue light there is swamped by brilliant Hα and OIII emission from ionized hydrogen and oxygen gas.

Now take a look at Orion's Belt and Alnilam. Can you see that the otherwise nearly ubiquitous reddish Hα background seems to come to a stop near Alnilam, the middle star of Orion's Belt? And can you see, too, that there seems to be very many small blue stars surrounding Alnilam?

Parallax measurements suggest that Alnilam is farther away from us than the other two stars of Orion's Belt. It may or may not be slightly older than the other Belt stars, too, but in any case it seems to be the central star of a fairly rich young association of blue stars. Together, these numerous blue stars may have blown away the gases around them, so that there is no hydrogen gas left in the vicinity of Alnilam. If there were, Alnilam would produce its own red nebula, because Alnilam is hot enough to make hydrogen glow red.

So there is no hydrogen sufficiently close to Alnilam for Alnilam to ionize it and make it glow red. But Alnilam itself produces copious amounts of blue light, and all the other small stars surrounding it also produce blue light. There are some astrophotos that show that dust along our line of sight to Alnilam and its association is lit up faintly by the light of Alnilam and the other blue stars and is made to glow faintly blue, as in this photo by Mohammad Noaroozi.

And by the way: There is no obvious OIII light in the ESO picture that you can see in my post, and my impression of the APOD is that there is not too much OIII in that picture, either. That is because OIII light is typically seen very close to very hot stars, not farther away from the hot stars than the red Hα light.