Explanation: Not a Falcon 9 rocket launch after sunset, the Cat's Eye Nebula (NGC 6543) is one of the best known planetary nebulae in the sky. Its haunting symmetries are seen in the very central region of [url=http://www.robgendlerastropics.com/NGC6543-BYU.html" >this composited picture</a>, processed to reveal an enormous but extremely faint halo of gaseous material, over three light-years across. Made with data from ground- and space-based telescopes it shows the extended emission which surrounds the brighter, familiar <a href="http://en.wikipedia.org/wiki/Planetary_nebula]planetary nebula[/url]. Planetary nebulae have long been appreciated as a final phase in the life of a sun-like star. But only more recently have some planetaries been found to have halos like this one, likely formed of material shrugged off during earlier active episodes in the star's evolution. While the planetary nebula phase is thought to last for around 10,000 years, astronomers estimate the outer filamentary portions of this halo to be 50,000 to 90,000 years old.

I posted a reply but it got eaten. The web site is having problems at the moment. And no, it is not that I overlooked that stupid validation question; at least that does not eat the reply.
Top

Could we assume by the first line in the explanation that it is a Falcon 9 Rocket launch BEFORE sunset?
Top 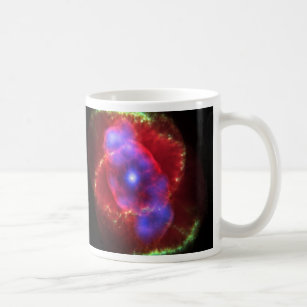 Fascinating insight into the last phases of stellar evolution!
Top

Oh Wow! Stands out in my mind; as one of APOD's most beautiful!

I'm over here and yes I totally love this image! Here's to more PN haloes being photographed in the future.
Top

A facsimile of that amazing center would make a beautiful pendant.
Top

Part of the halo seems to have a straight edge?
Cat eye_LI (2).jpg
Not something you'd expect. A result of processing

<<The Cat's Eye Nebula's small bright inner nebula subtends an average of 16.1 arcsec, with the outer prominent condensations about 25 arcsec. Deep images reveal an extended halo about 5 arcmin [~4.4 lyr] across, that was once ejected by the central progenitor star during its red giant phase.

NGC 6543 is just 4.4 arcmin from the current position of the North Ecliptic Pole(, less than ​1⁄10 of the 45 arc minutes between Polaris and the current location of the Earth's northern axis of rotation). It is a convenient and accurate marker for the axis of rotation of the Earth's ecliptic, around which the celestial North Pole rotates. It is also a good marker for the nearby “invariable” axis of the solar system, which is the center of the circles which every planet's north pole, and the north pole of every planet's orbit, make in the sky. Its position as an ecliptic pole station marker is essentially permanent on the time-scale of human history, as opposed to the Pole Star, which changes every few thousand years.

Observations show the bright nebulosity has temperatures between 7000 and 9000 K, whose densities average of about 5000 particles per cubic centimetre. Its outer halo has the higher temperature around 15000 K, but is of much lower density. Velocity of the fast stellar wind is about 1900 km/s, where spectroscopic analysis shows the current rate of mass loss averages 3.2×10−7 solar masses per year.

Surface temperature for the central PNN is about 80000 K, being 10000 times as luminous as the sun. Stellar classification is O7 + [WR]–type star. Calculations suggest the PNN is over one solar mass, from a theoretical initial 5 solar masses. The central Wolf-Rayet star has a radius of 0.65 R☉. The Cat's Eye Nebula, given in some sources, lies about three thousand light-years from Earth.>>

Maybe, but I can see two more straight line effects that cut across the one Fred pointed out.

Bruce
Just as zero is not equal to infinity, everything coming from nothing is illogical.
Top
13 posts • Page 1 of 1