Explanation: The Tarantula Nebula, also known as 30 Doradus, is more than a thousand light-years in diameter, a giant star forming region within nearby satellite galaxy the Large Magellanic Cloud. About 180 thousand light-years away, it's the largest, most violent star forming region known in the whole Local Group of galaxies. The cosmic arachnid sprawls across this spectacular view, composed with narrowband filter data centered on emission from ionized hydrogen atoms. Within the Tarantula (NGC 2070), intense radiation, stellar winds and supernova shocks from the central young cluster of massive stars, cataloged as R136, energize the nebular glow and shape the spidery filaments. Around the Tarantula are other star forming regions with young star clusters, filaments, and blown-out bubble-shaped clouds. In fact, the frame includes the site of the closest supernova in modern times, SN 1987A, left of center. The rich field of view spans about 1 degree or 2 full moons, in the southern constellation Dorado. But were the Tarantula Nebula closer, say 1,500 light-years distant like the local star forming Orion Nebula, it would take up half the sky.

This must be an HαRGB image. Good! I really appreciate it. The colors look very good, and the redness doesn't cover up the blue-white hue of the brilliant hot stars of R136.

By the way though, it would be very interesting if you could mark the position of the SN 1987A supernova remnant on today's APOD.

The caption states "the frame includes the site of the closest supernova in modern times, SN 1987A, left of center", but this is not so; the site is well beyond the upper edge of the image, as this comparison with an AAO image shows. 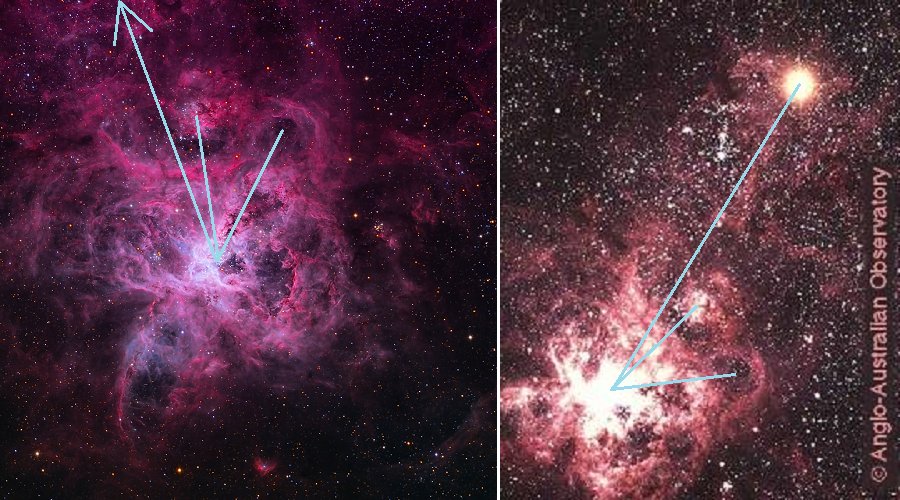 You can see the location of SN 1987A marked in the link "Around the Tarantula". By the looks of it SN 1987A is well out of the frame at top in today's APOD, not left of center.
Top

You know what would be good is if we had an old picture of the Tarantula Nebula before the HST that actually looked like a tarantula. For comparison
Top

What do you suppose is different about the LMC that caused it to form such a dense cluster of hot blue stars? Something dynamic must have occurred for such a thing to happen at the same time.
Top

Devil Particle wrote: ↑Sat Nov 17, 2018 3:03 pm
You know what would be good is if we had an old picture of the Tarantula Nebula before the HST that actually looked like a tarantula. For comparison

https://en.wikipedia.org/wiki/If_a_tree_falls_in_a_forest wrote:
"If a tree falls in a forest and no one is around to hear it, does it make a sound?" is a philosophical thought experiment that raises questions regarding observation and perception.

Philosopher George Berkeley, in his work, A Treatise Concerning the Principles of Human Knowledge (1710), proposes, "But, say you, surely there is nothing easier than for me to imagine trees, for instance, in a park [...] and nobody by to perceive them. [...] The objects of sense exist only when they are perceived; the trees therefore are in the garden [...] no longer than while there is somebody by to perceive them."

Some years later, a similar question is posed. It is unknown whether the source of this question is Berkeley or not. In June 1883 in the magazine The Chautauquan, the question was put, "If a tree were to fall on an island where there were no human beings would there be any sound?" They then went on to answer the query with, "No. Sound is the sensation excited in the ear when the air or other medium is set in motion." This seems to imply that the question is posed not from a philosophical viewpoint, but from a purely scientific one. The magazine Scientific American corroborated the technical aspect of this question, while leaving out the philosophic side, a year later when they asked the question slightly reworded, "If a tree were to fall on an uninhabited island, would there be any sound?" And gave a more technical answer, "Sound is vibration, transmitted to our senses through the mechanism of the ear, and recognized as sound only at our nerve centers. The falling of the tree or any other disturbance will produce vibration of the air. If there be no ears to hear, there will be no sound."

Albert Einstein is reported to have asked his fellow physicist and friend Niels Bohr, one of the founding fathers of quantum mechanics, whether he realistically believed that 'the moon does not exist if nobody is looking at it.' To this Bohr replied that however hard he (Einstein) may try, he would not be able to prove that it does, thus giving the entire riddle the status of a kind of an infallible conjecture—one that cannot be either proved or disproved.>>

I have pinpointed the location on one of my images:

This is the frame: 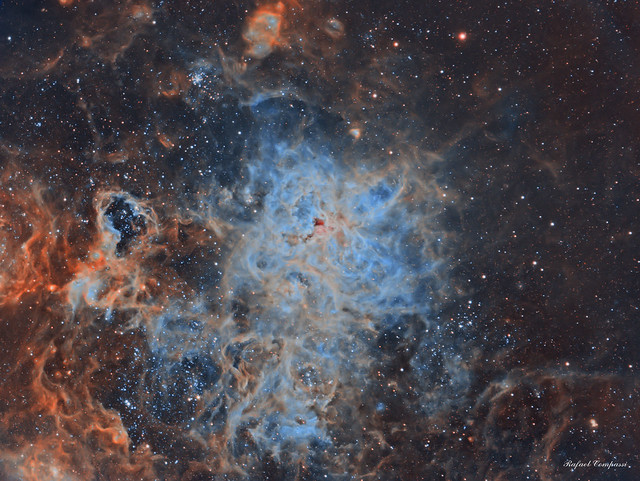 Tarantula in Hubble Palette by Rafael Compassi, no Flickr

If you look right at the bottom of the image, you'll find a void, with a blue and red-orange star on it.
In this next frame, I matched the position with an Anglo-Australian Telescope image: 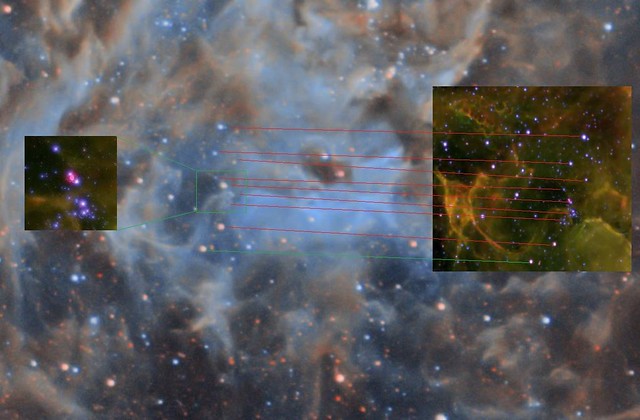