Explanation: They say Orion always comes up sideways, and he does seem to on this cold December night. The bright stars of the familiar northern winter constellation lie just above the snowy tree tops surrounding a cozy cottage near the town of Ustupky in the Czech Republic. But Gemini's meteors also seem to rain on the wintry landscape. The meteor streaks are captured in exposures made near last Friday's peak of the annual Geminid meteor shower. They stream away from the shower's radiant above the trees, near the two bright stars of the zodiacal constellation of the Twins. Comet Wirtanen, a visitor to planet Earth's skies, is visible too. Look for its telltale greenish coma near the stars of the seven sisters.

They say Orion always comes up sideways. Would the 'they' be Robert Frost? What an appropriate name, frost, for a poet writing about the cold December night.
Gotta say though thanks to today's APOD writer. In all my years I never read Frost, though I did see him once in a while on the bookstore shelves. But wow, that is such a groovy poem. Or is it prose? Glad I read it.
Top 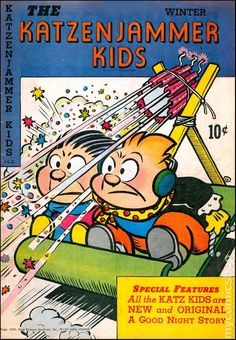 <<The Katzenjammer Kids featured Hans and Fritz, [Gemini] twins who rebelled against authority, particularly in the form of their mother, Mama; der Captain, a shipwrecked sailor who acted as a surrogate father; and der Inspector, an official from the school system. Other characters included John Silver, a pirate sea captain and his crew, and King Bongo, a primitive-living but sophisticated-acting jungle monarch who ruled a tropical island. Several of the characters spoke in stereotypical German-accented English.

The defining theme of the strip was Hans and Fritz pranking der Captain, der Inspector, Mama, or all three, for which the boys were often spanked, but sometimes shifted the blame to others. Other stories involved der Captain taking the Katzenjammers on treasure hunts or cargo voyages, sometimes aided by or competing with John Silver. Still other stories involved King Bongo enlisting the Katzenjammers to run errands or go on missions related to his kingdom; in both strips, by the mid-1930s, the family lived on Bongo's island—usually called Squee-Jee—and were readily at hand.

Knerr's version of The Katzenjammer Kids introduced several major new characters in the 1930s. Miss Twiddle, a pompous tutor, and her brainy niece Lena came to stay permanently with the Katzenjammers in early 1936. Later in the year Twiddle's ex-pupil, "boy prodigy" Rollo Rhubarb joined them. The EVER-smug Rollo is always trying to outwit Hans and Fritz, but his cunning plans often backfire.>>