Explanation: Centered in a well-composed celestial still life, pretty, blue vdB 9 is the 9th object in Sidney van den Bergh's 1966 catalog of reflection nebulae. It shares this telescopic field of view, about twice the size of a full moon on the sky, with stars and dark, obscuring dust clouds in the northerly constellation Cassiopeia. Cosmic dust is preferentially reflecting blue starlight from embedded, hot star SU Cassiopeiae, giving vdB 9 the characteristic bluish tint associated with a classical reflection nebula. SU Cas is a Cepheid variable star, though even at its brightest it is just too faint to be seen with the unaided eye. Still Cepheids play an important role in determining distances in our galaxy and beyond. At the star's well-known distance of 1,540 light-years, this cosmic canvas would be about 24 light-years across.

Like the caption said, Cepheid stars are important in order to determine distances in space. That is because they pulsate, and the slower they pulsate, the intrinsically brighter they are. A problem is that Cepheids are rare, and it has been difficult to measure the exact distances to the ones that we know of in the Milky Way. Hopefully Gaia can determine the exact distances to many Cepheids in our galaxy. 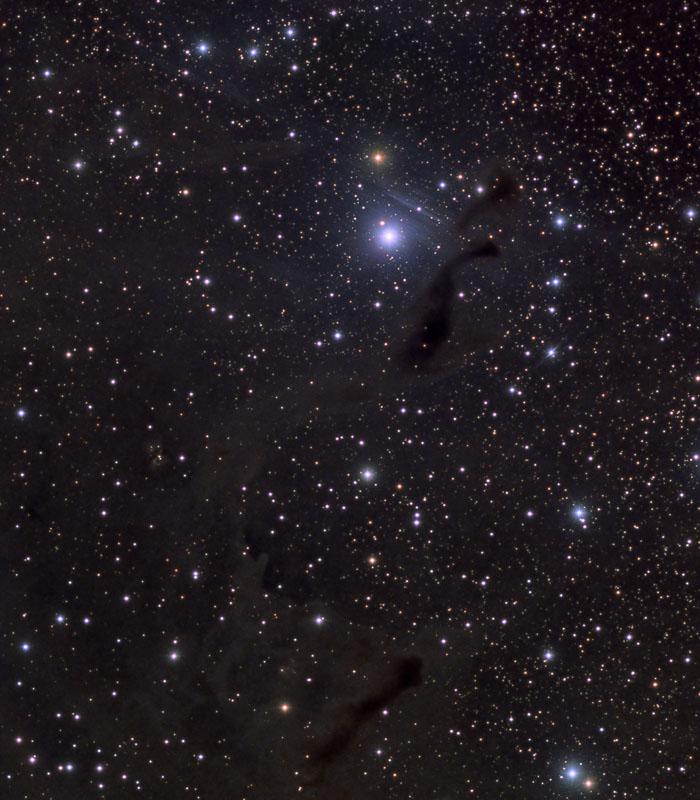 
I apologize for being unable to post a smaller version of today's APOD, so I had to find another photographer's picture of SU Cas and vdB 9. As you can see, SU Cas looks quite different from another Cepheid, RS Pup.

RS Puppis (or RS Pup) is a Cepheid variable star around 6,000 ly away in the constellation of Puppis. It is one of the brightest known Cepheids in the Milky Way galaxy and has one of the longest periods for this class of star at 41.5 days.

My impression of RS Pup is that its powerful pulsations have thrown off quite a bit of the star's outer atmosphere, and light echoes propagate through this cast-off and irregularly distributed gas. SU Cas, by contrast, looks quiet, and its reflection nebula appears to be caused the presence of gas in the vicinity rather than gas that has been cast off by the star itself.

This paper, which I am utterly unable to read due to its scientific jargong, nevertheless calls SU Cas a "short-period classical Cepheid". So we can safely assume that SU Cas is a very different star than RS Pup: It is smaller, fainter and bluer, and it pulsates much faster and probably with much less force. The B-V index of SU Cas is 0.7, but the B-V index of RS Pup is 1.3. Brighter Cepheids are typically redder than fainter ones.

Is anything known about particle size of cosmic dust clouds?
Top

Dust like this ranges from molecular to clumps of perhaps 100 nm diameter.
Chris