Explanation: The night side of Pluto spans this shadowy scene, a stunning spacebased view with the Sun 4.9 billion kilometers (almost 4.5 light-hours) behind the dim and distant world. It was captured by far flung New Horizons in July of 2015. The spacecraft was at a range of some 21,000 kilometers from Pluto, about 19 minutes after its closest approach. A denizen of the Kuiper Belt in dramatic silhouette, the image also reveals Pluto's tenuous, surprisingly complex layers of hazy atmosphere. The crescent twilight landscape near the top of the frame includes southern areas of nitrogen ice plains now formally known as Sputnik Planitia and rugged mountains of water-ice in the Norgay Montes. 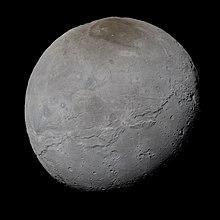 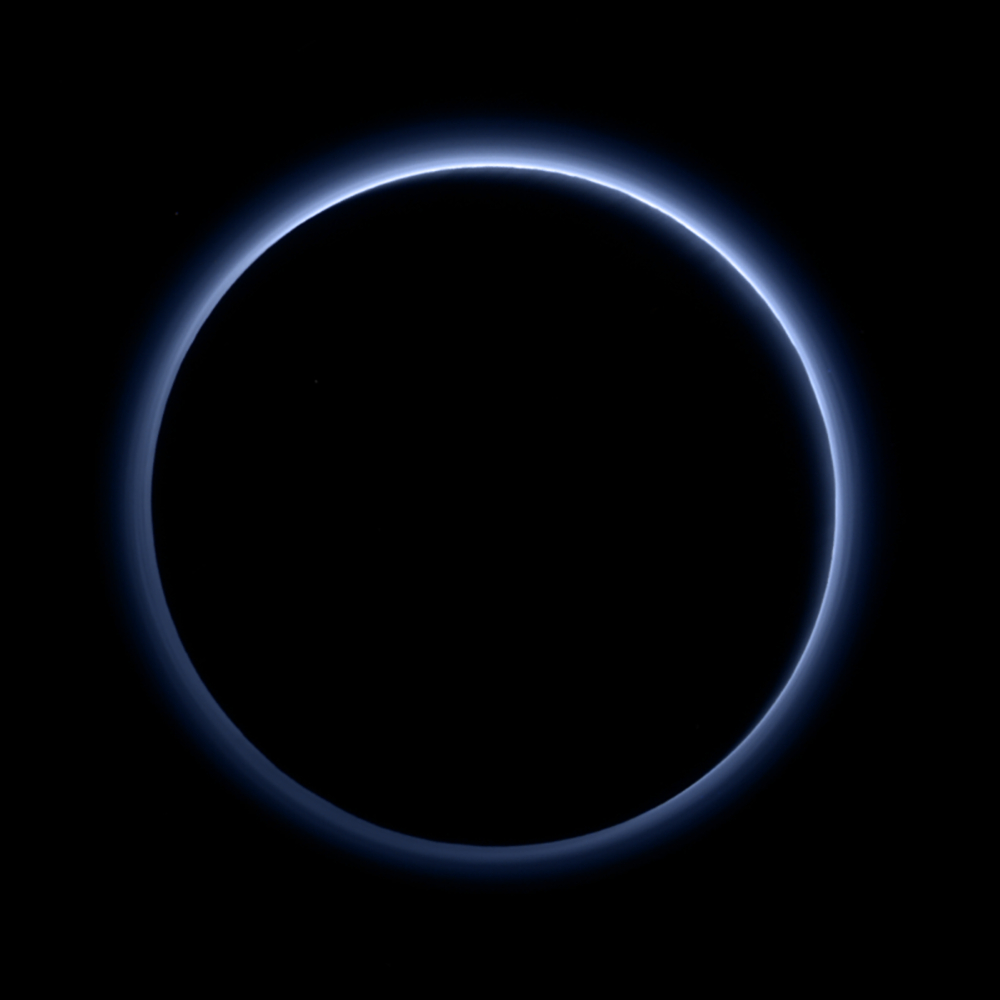 Pluto’s Blue Sky: Pluto’s haze layer shows its blue color in this picture taken by
the New Horizons Ralph/Multispectral Visible Imaging Camera (MVIC).
The high-altitude haze is thought to be similar in nature to that seen at Saturn’s
moon Titan. The source of both hazes likely involves sunlight-initiated
chemical reactions of nitrogen and methane, leading to relatively small, soot-like
particles (called tholins) that grow as they settle toward the surface. This
image was generated by software that combines information from blue,
red and near-infrared images to replicate the color a human eye would perceive
as closely as possible.Credits: NASA/JHUAPL/SwRI 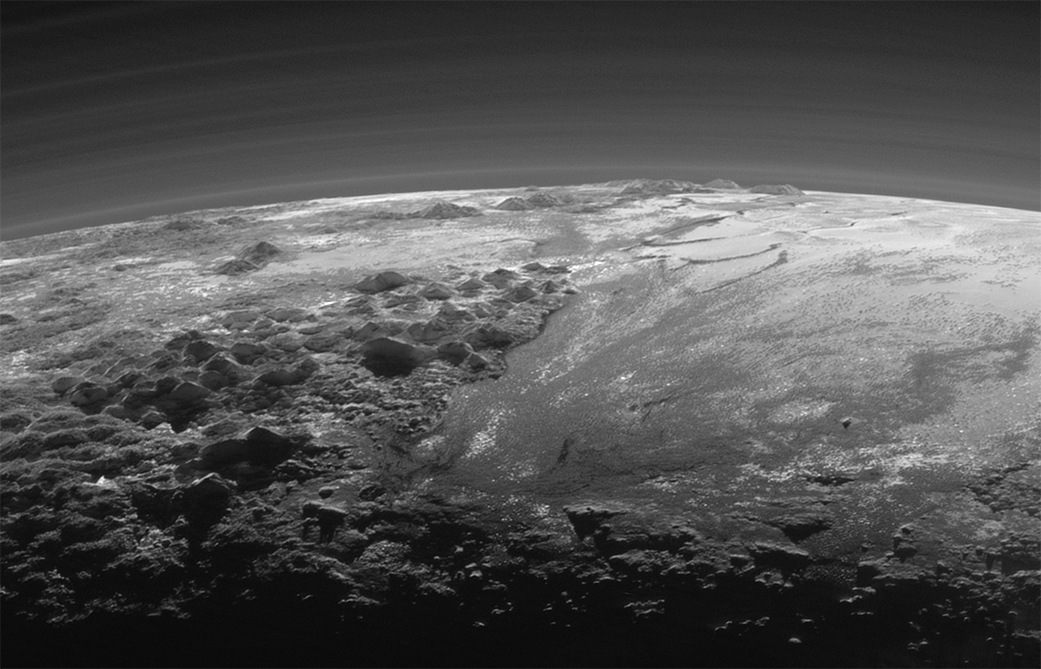 The haze particles themselves are likely gray or red, but the way they scatter blue light has gotten the attention of the New Horizons science team. “That striking blue tint tells us about the size and composition of the haze particles,” said science team researcher Carly Howett, also of SwRI. “A blue sky often results from scattering of sunlight by very small particles. On Earth, those particles are very tiny nitrogen molecules. On Pluto they appear to be larger — but still relatively small — soot-like particles we call tholins.”... 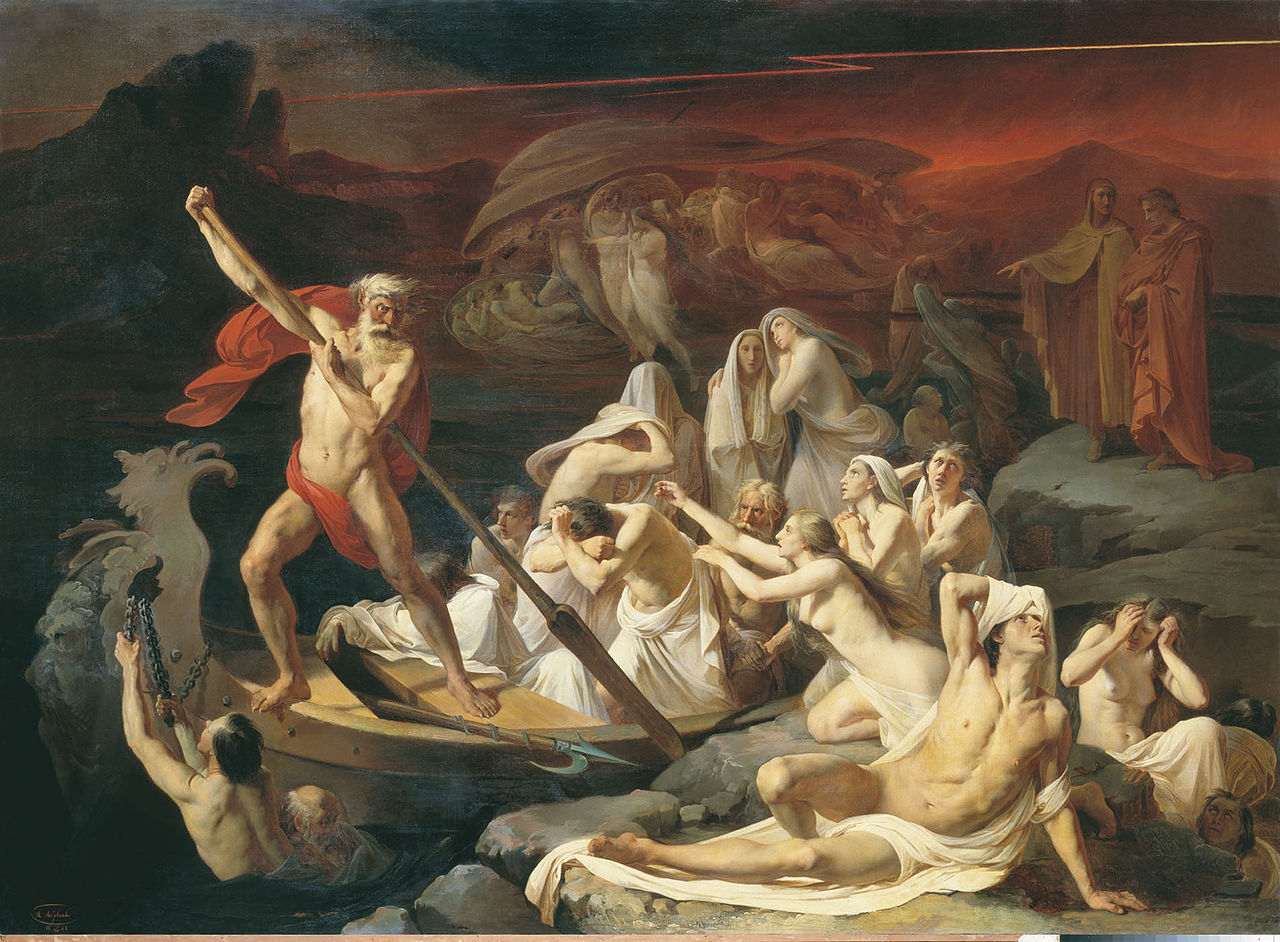 Charon, the ferryman of Hades. Note that he is wearing red.
Painting: Alexander Litovchenko
Well, Charon is already a god, sort of...

In Greek mythology, Charon or Kharon (/ˈkɛərɒn, -ən/; Greek Χάρων) is the ferryman of Hades who carries souls of the newly deceased across the rivers Styx and Acheron that divided the world of the living from the world of the dead.

As the disc of Pluto is almost entirely in night, the only value of this picture is in the image of the atmosphere. As I knew nothing, I followd the link to "complex layers" and found at least a Wiki page on Atmospheric Escape: https://en.wikipedia.org/wiki/Atmospheric_escape which is more educational than the paper that the link leads to, for an ignoramus.
What's the significance of all the organics in the Plutonian atmosphere? We get excited by seeing methane on Mars.

PIA20727PlutoNight1024c.jpg
You do not have the required permissions to view the files attached to this post.
Orin

Yeah. I'll take the Earth over Pluto any day.

JohnD wrote: ↑
Sun Oct 20, 2019 10:18 am
What's the significance of all the organics in the Plutonian atmosphere? We get excited by seeing methane on Mars.

They're probably Tholins, (mostly) hydrocarbon compounds created from simpler surface and atmospheric chemicals due to UV from the sun and cosmic radiation from everywhere else. It's a very slow reaction, but it's had a very, very long time to work — conditions aren't right in the inner solar system, but way out on the fringes tholins seem to be just about everywhere. IIRC one of the large Kuiper Belt Objects found in recent years is one of the reddest solid objects known; it wouldn't surprise me to find out it's even more covered in tholins than Pluto. And don't forget the colour pictures sent back from New Horizons of the KBO Ultima Thule; it's very red as well.

Note the mentions in the link above to the Miller-Urey experiment — "tholin" isn't a specific chemical, it's a random mix of organic chemical lego bricks, which has a dark red colour when it's made in the laboratory.
This universe shipped by weight, not by volume.
Some expansion of the contents may have occurred during shipment.
Top

<<The term "tholin" was coined by astronomer Carl Sagan and his colleague Bishun Khare to describe the difficult-to-characterize substances they obtained in his Miller-Urey-type experiments on the methane-containing gas mixtures such as those found in Titan's atmosphere:
Tholins do not form naturally on modern-day Earth, but they are found in great abundance on the surfaces of icy bodies in the outer Solar System, and as reddish aerosols in the atmosphere of outer Solar System planets and moons.

In the presence of water, tholins can be raw materials for prebiotic chemistry, i.e. the non-living chemistry that forms the basic chemicals which form life.>>

https://en.wikipedia.org/wiki/Poisoning_the_well wrote:
<<Muddying the waters (or poisoning the well) is a type of informal fallacy where irrelevant adverse information about a target is preemptively presented to an audience, with the intention of discrediting or ridiculing something that the target person is about to say. It can be a special case of argumentum ad hominem: