Explanation: On May 25, 1961 U.S. president John Kennedy announced the goal of landing astronauts on the Moon by the end of the decade. By November 9, 1967 this Saturn V rocket was ready for launch and the first full test of its capabilities on the Apollo 4 mission. Its development directed by rocket pioneer Wernher Von Braun, the three stage Saturn V stood over 36 stories tall. It had a cluster of five first stage engines fueled by liquid oxygen and kerosene which together were capable of producing 7.9 million pounds of thrust. Giant Saturn V rockets ultimately hurled nine Apollo missions to the Moon and back again with six landing on the lunar surface. The first landing mission, Apollo 11, achieved Kennedy's goal on July 20, 1969.

Interesting timing. 5 days from today's date it will be the 50th anniversary of the launch of Apollo 12. Of course nothing goes smoothly. Apollo 12 was hit by lightning some 50 seconds after launch, sending the instruments haywire, and jeopardizing the mission, but all was solved by rebooting the computer.
Top

Isn't Apollo 4 the launch that's almost always used in films and TV to depict "great big rocket go thataway"? IIRC the black patterns were different for every Saturn V, and there's also the S-IC/Interstage separation, filmed by cameras on the S-II that were ejected and recovered.

A very nice picture, although I don't remember any of the Apollo flights before 11 — not sure if we had a TV at home back then, but I do remember watching the moonwalk the day after on a tiny little TV at school.
This universe shipped by weight, not by volume.
Some expansion of the contents may have occurred during shipment.
Top

Today's APOD is still ab awesome sight even though the launch was 52 years ago!

s67-50903_saturnVlaunch1024.jpg
You do not have the required permissions to view the files attached to this post.
Orin

My favourite spaceship is the Serenity.
(I'am a leaf on the wind)
Top

Too bad Firefly had such a short run. Every episode was a joy to watch, and all its characters where intriguing, including the little ship Serenity.
Just as zero is not equal to infinity, everything coming from nothing is illogical.
Top 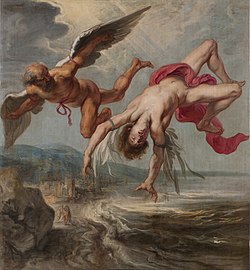 https://en.wikipedia.org/wiki/Icarus wrote:
<<In Greek mythology, Icarus (the Latin spelling; Ancient Greek: Ἴκαρος, Íkaro) is the son of the master craftsman Daedalus, the creator of the Labyrinth. Icarus and his father attempt to escape from Crete by means of wings that his father constructed from feathers and wax. Icarus' father warns him first of complacency and then of hubris, asking that he fly neither too low nor too high, so the sea's dampness would not clog his wings nor the sun's heat melt them. Icarus ignored his father's instructions not to fly too close to the sun; when the wax in his wings melted he tumbled out of the sky and fell into the sea where he drowned, sparking the idiom "don't fly too close to the sun".>>

https://en.wikipedia.org/wiki/Apollo_11#Return wrote:
<<On Apollo 11 return to Earth, a bearing at the Guam tracking station failed, potentially preventing communication on the last segment of the Earth return. A regular repair was not possible in the available time but the station director, Charles Force, had his ten-year-old son Greg use his small hands to reach into the housing and pack it with grease. Greg was later thanked by Armstrong.>>

https://en.wikipedia.org/wiki/Elon_Musk wrote:
<<Elon Reeve Musk FRS (born June 28, 1971) is the founder of The Boring Company Musk has considered the simulation hypothesis as a potential solution to the Fermi paradox:

The absence of any noticeable life may be an argument in favour of us being in a simulation ... Like when you're playing an adventure game, and you can see the stars in the background, but you can't ever get there. If it's not a simulation, then maybe we're in a lab and there's some advanced alien civilization that's just watching how we develop, out of curiosity, like mould in a Petri dish ... If you look at our current technology level, something strange has to happen to civilizations, and I mean strange in a bad way. ... And it could be that there are a whole lot of dead, one-planet civilizations.>>

https://simpsons.fandom.com/wiki/Treehouse_of_Horror_VII wrote:
Click to play embedded YouTube video.
<<In a parody of the Twilight Zone episode, The Little People, Lisa places a tooth in cola for a school science project. After being shocked by static electricity from Bart, Lisa touches the tooth, and the spark causes life to evolve in the petrify dish where the cola and tooth are. In less than a few days, the tiny people have evolved to a futuristic cityscape. However, Bart playfully destroys some of their tiny buildings, causing them to launch a counterattack, sending a small fleet of aerial vehicles to attack him. Bart wants to destroy them for attacking him, but Lisa intervenes. He leaves, threatening that he will get revenge on them. Shortly after this, a strange beam from the petri dish hits Lisa, shrinking her down and into the tooth city, where she finds she is hailed as a god and Bart as the devil. The citizenry ask her for many answers, to which she promises she can help if she were big again. However, the people have not figured the technology to enlarge objects. Matters become worse when Bart claims the petri dish and the civilization as his own, winning the school science fair. Realizing that she is trapped with the tooth city's inhabitants forever, Lisa settles in to become their leader, beginning by ordering them to bring her some nice shoes to replace her now gone slippers, and some socks, too (as one inhabitant suggests).>>

Wow; this thread is evolving!