Explanation: Looking toward the east in the early hours of a September morning this single exposure made with tripod and camera captured a simple visual experience. Rising above the tree-lined slope are familiar stars in planet Earth's northern night and the constellation Orion the Hunter. Brighter stars marking the celestial Hunter's shoulder (Betelgeuse), foot (Rigel), belt, and sword are clearly reflected in the calm waters from northern Latvia's Vitrupe river. Of course, winter is coming to planet Earth's northern hemisphere. By then Orion and this beautiful starry vista will be seen rising in early evening skies.

Wow! I didn't notice so many stars speckled in the constellation in a sky view before! Nice photo!
Orin

That's a lovely patch of Sol's 3rd planet.
A serene place for a hunter biden his time in eastern Europe. 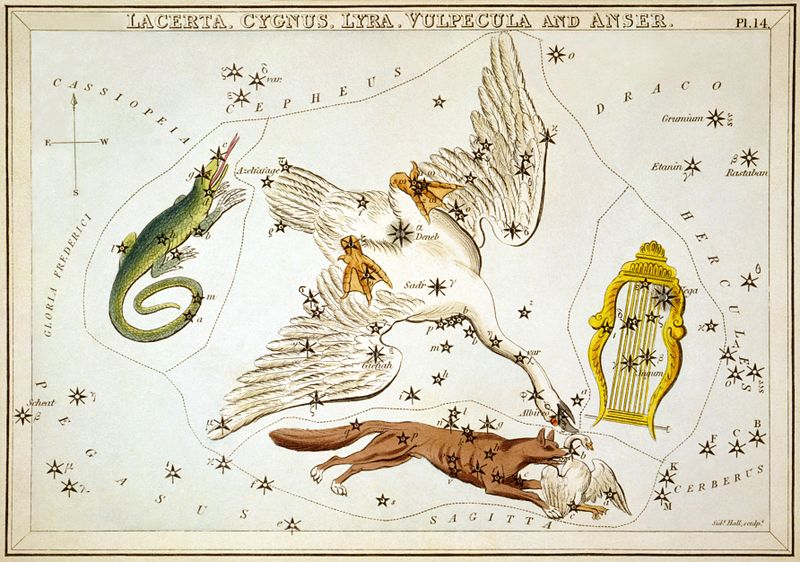 The constellation _Vulpecula and Anser_ [1825 star map from Urania's Mirror]

Click to play embedded YouTube video.
<<Vulpecula is a faint constellation in the northern sky. Its name is Latin for "little Fox", although it is commonly known simply as the Fox. The Dumbbell Nebula (M27), is a large planetary nebula which was discovered by the French astronomer Charles Messier in 1764 as the very first object of its kind. It can be seen with good binoculars in a dark sky location, appearing as a dim disk 6 arcminutes in diameter.

There are no stars brighter than 4th magnitude in the Fox. The brightest star is Alpha Vulpeculae, a magnitude 4.44m red giant at a distance of 297 light-years. The star is an optical binary that carries the traditional name Anser, which refers to the goose the little fox holds in its jaws. Anser has been analysed as a member of the Arcturus stream, a group of stars with high (im)proper motion & mettle-poor properties thought to be the remnants of a small galaxy consumed by the Milky Way.

In 1967, the first pulsar, PSR B1919+21, was discovered in Vulpecula by Jocelyn Bell, supervised by Antony Hewish, in Cambridge. While they were searching for scintillation of radio signals of quasars, they observed pulses which repeated with a period of 1.3373 seconds. Fifteen years after the first pulsar was discovered, the first millisecond pulsar, PSR B1937+21, was also discovered in Vulpecula, only a few degrees in the sky away from PSR B1919+21.

Vulpecula is also home to HD 189733 b, one of the closest extrasolar planets currently being studied by the Spitzer Space Telescope. On 12 July 2007 the Financial Times (London) reported that the chemical signature of water vapour was detected in the atmosphere of this planet. However. HD 189733b with atmospheric temperatures rising above 1,000°C it is far from being habitable.

NGC 7052 is an elliptical galaxy in Vulpecula at a distance of 214 million light-years from Earth. It has a central dusty disk with a diameter of 3700 light-years; there is a supermassive black hole with a mass of 300 million solar masses in its nucleus. Jets can be seen emanating from the galaxy, and it has very strong radio emissions. Astronomers surmise that the disk is the remnant of a smaller galaxy that merged with NGC 7052.

The eastern part of Vulpecula is occupied by the Hercules–Corona Borealis Great Wall. It is a galaxy filament, with the length of 3,000 megaparsecs, making it the largest structure in the universe.>>

I like how the reflection makes it that much easier to actually pick out the stars that make up Orion per se.
Top

Tara_Li wrote: ↑Sat Nov 23, 2019 4:01 am
I like how the reflection makes it that much easier to actually pick out the stars that make up Orion per se.

https://en.wikipedia.org/wiki/Orion_(mythology)#Renaissance wrote:
<<The 16th-century Italian mythographer Natalis Comes explains how Orion walked on the sea: "Since the subtler part of the water which is rarefied rests on the surface, it is said that Orion learned from Neptune [his father] how to walk on water.">>