Explanation: You need to be in the south, looking south, to see such a sky. And only then if you're lucky. Just above the picturesque tree is the impressive Carina Nebula, one of the few nebulas in the sky that is visible to the unaided eye. The featured image had to be taken from a very dark location to capture the Carina Nebula with such perspective and so near the horizon. The Great Nebula in Carina, cataloged as NGC 3372, is home to the wildly variable star Eta Carinae that sometimes flares to become one of the brightest stars in the sky. Above Carina is IC 2944, the Running Chicken Nebula, a nebula that not only looks like a chicken, but contains impressive dark knots of dust. Above these red-glowing emission nebulas are the bright stars of the Southern Cross, while on the upper left of the image is the dark Coalsack Nebula. This image was composed from six consecutive exposures taken last summer from Padre Bernardo, GoiÃ¡s, Brazil. Even with careful planning, the astrophotographer felt lucky to get this shot because clouds -- some still visible near the horizon -- kept getting in the way.

“ Above Carina is IC 2944, the Running Chicken Nebula”
Did you know there are more than two chickens for every person on Earth?
That chickens are the closest living relative of the T. Rex?

Keep an eye on them.
Top

It would be difficult to use as a background though!
You do not have the required permissions to view the files attached to this post.
Orin

Nice photo!
But, how does this Southern Cross work?
Do either of the "crossbars" point South?
Is the South Celestial Pole "visible" in this photo?
(Feeling blessed us people in Up Over have such a definite pole star)
Thanks for any response!
Top

It would be difficult to use as a background though!

Not on an iPad or smart phone!
--
"To B̬̻̋̚o̞̮̚̚l̘̲̀᷾d̫͓᷅ͩḷ̯᷁ͮȳ͙᷊͠ Go......Beyond The F͇̤i̙̖e̤̟l̡͓d͈̹s̙͚ We Know."
Top

That’s true of all birds.
Top

One can get some perspective on these objects from some parts of the northern hemisphere. While I cannot get this exact perspective, at 18° north I can get all of these objects at the same time. In fact, right about now (9 p.m. local time on May 5), Crux and NGC 3372 are just about level with each other.
Top

Some birds are closer than others, though.
Chris

Hens' Teeth Not So Rare After All
Science Daily February 23, 2006

<<Scientists have discovered that rarest of things: a chicken with teeth -- crocodile teeth to be precise.

Contrary to the well-known phrase, 'As rare as hens' teeth,' the researchers say they have found a naturally occurring mutant chicken called Talpid that has a complete set of ivories.

The team, based at the Universities of Manchester and Wisconsin, have also managed to induce teeth growth in normal chickens -- activating genes that have lain dormant for 80 million years.

Professor Mark Ferguson, one of the scientific team at the University of Manchester, says the research -- published in Current Biology this week -- has major implications in understanding the processes of evolution. It could also have applications in tissue regeneration, including the replacement of lost teeth in humans.

"The mutant bird has severe limb defects and dies before it can hatch," explained Professor Ferguson, who is based in the University's Faculty of Life Sciences. It was discovered 50 years ago but no one has ever examined its mouth. What we discovered were teeth similar to those of crocodiles -- not surprising as birds are the closest living relatives of the reptile."

The discovery led the team to wonder whether healthy chickens might still maintain the genetic pathways to re-grow teeth.

"We found we were able to induce teeth to grow in normal chickens by making changes to the expression of particular molecules," said Professor Ferguson. All the pathways to make teeth are preserved which helps us understand how evolutionary changes can be brought about by subtle alterations in developmental biology.">>

How can this be, since birds and tyrannosaurs are in separate clades? Even if you parse the evolutionary tree such that some branches of birds are somehow closer than others to a theropod lineage that separated long before birds even evolved, how can you say that a chicken is more closely related to a tyrannosaur than other fowl, such as grouses, turkeys, or pheasants?
Top

How can this be, since birds and tyrannosaurs are in separate clades? Even if you parse the evolutionary tree such that some branches of birds are somehow closer than others to a theropod lineage that separated long before birds even evolved, how can you say that a chicken is more closely related to a tyrannosaur than other fowl, such as grouses, turkeys, or pheasants?

I didn't identify any particular birds as closer than others. But birds have continued to evolve, and that means some species have deviated further from their common ancestor than others. Which means some are more removed from dinosaurs than others.
Chris

How can this be, since birds and tyrannosaurs are in separate clades? Even if you parse the evolutionary tree such that some branches of birds are somehow closer than others to a theropod lineage that separated long before birds even evolved, how can you say that a chicken is more closely related to a tyrannosaur than other fowl, such as grouses, turkeys, or pheasants? 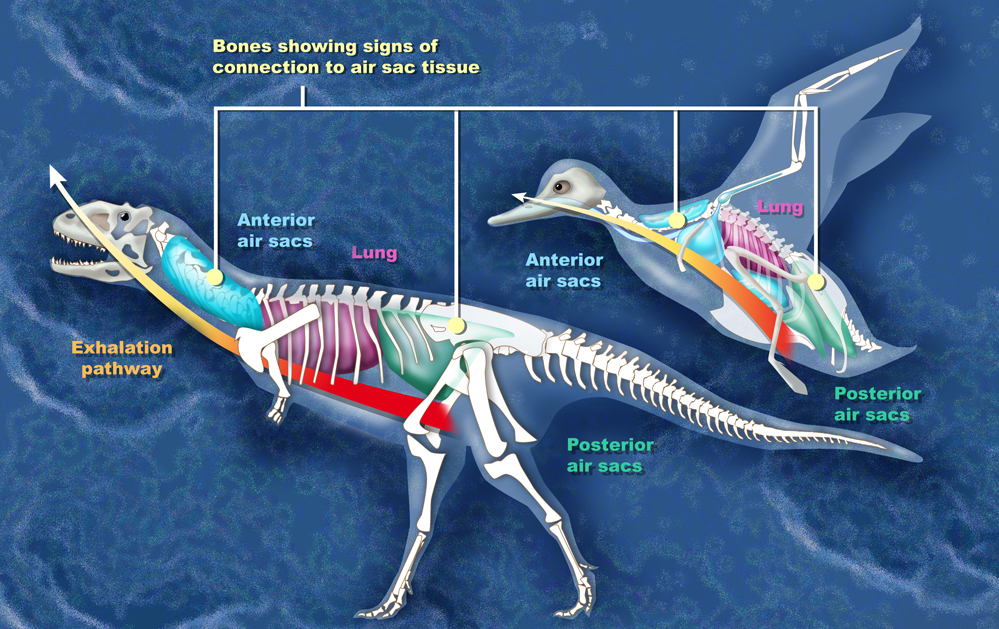 Comparison between the air sacs of Majungasaurus and a bird (duck)

<<On several occasions, the extraction of DNA and proteins from Mesozoic dinosaurs fossils has been claimed, allowing for a comparison with birds. Several proteins have putatively been detected in dinosaur fossils, including hemoglobin.

In the March 2005 issue of Science, Dr. Mary Higby Schweitzer and her team announced the discovery of flexible material resembling actual soft tissue inside a 68-million-year-old Tyrannosaurus rex leg bone of specimen MOR 1125 from the Hell Creek Formation in Montana. The seven collagen types obtained from the bone fragments, compared to collagen data from living birds (specifically, a chicken), suggest that older theropods and birds are closely related. The soft tissue allowed a molecular comparison of cellular anatomy and protein sequencing of collagen tissue published in 2007, both of which indicated that T. rex and birds are more closely related to each other than either is to Alligator. A second molecular study robustly supported the relationship of birds to dinosaurs, though it did not place birds within Theropoda, as expected. This study utilized eight additional collagen sequences extracted from a femur of the "mummified" Brachylophosaurus canadensis specimen MOR 2598, a hadrosaur. However, these results have been very controversial. No other peptides of a Mesozoic age have been reported. In 2008, it was suggested that the presumed soft tissue was in fact a bacterial microfilm. In response, it was argued that these very microfilms protected the soft tissue. Another objection was that the results could have been caused by contamination. In 2015, under more controlled conditions safeguarding against contamination, the peptides were still identified. In 2017, a study found that a peptide was present in the bone of the modern ostrich that was identical to that found in the Tyrannosaurus and Brachylophosaurus specimens, highlighting the danger of a cross-contamination.

The successful extraction of ancient DNA from dinosaur fossils has been reported on two separate occasions, but upon further inspection and peer review, neither of these reports could be confirmed.>>