Moon Pairs and the Synodic Month

Explanation: Observe the Moon each night and its visible sunlit portion will gradually change. In phases progressing from New Moon to Full Moon to New Moon again, a lunar cycle or synodic month is completed in about 29.5 days. They look full, but top left to bottom right these panels do show the range of lunar phases for a complete synodic month during August 2019 from Ragusa, Sicily, Italy, planet Earth. For this lunar cycle project the panels organize images of the lunar phases in pairs. Each individual image is paired with another image separated by about 15 days, or approximately half a synodic month. As a result the opposite sunlit portions complete the lunar disk and the shadow line at the boundary of lunar night and day, the terminator, steadily marches across the Moon's familiar nearside. For extra credit, what lunar phase would you pair with the Moon tonight?

Note that in most of these images the Moon is reddened, which is fine, as it adds variety to this composition. I wonder, since these shots where made from Sicily, was Mt. Etna erupting ash during this period?
Just as zero is not equal to infinity, everything coming from nothing is illogical.
Top

Don't even have to wait until 'tonight', the moon is already well visible.
Not sure if this will display here, but I'd say its slightly more than half visible,
so that will be somewhere across the middle of the diagrams there, tricky to
say precisely which one.? Sthn hemisphere, so your view is upside down !

Little fully automatic camera doesn't like to focus at infinity. Oh how I wish for a button to let it be so.
(or a bigger better camera.). Tree is a mango, in full flowering frenzy - and its blowing half a gale.
Hope some survive !

Note that I've had to flip it on its side, since images are only allowed to be 900 wide. 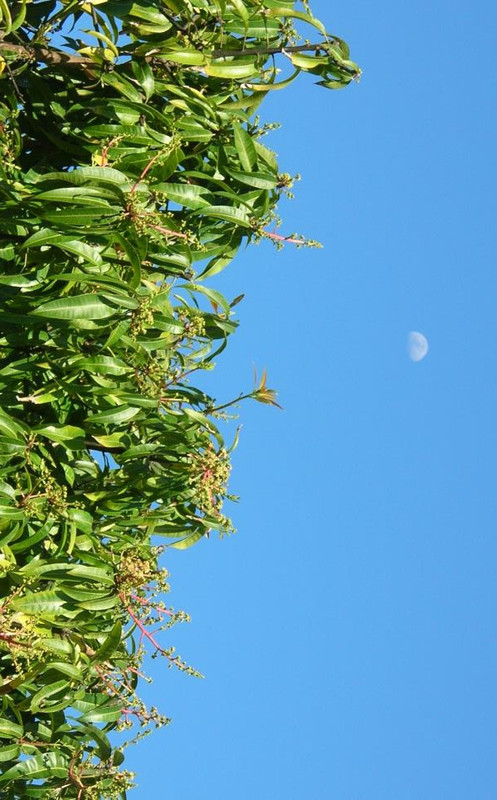 Why is the picture of the moon on day 15 (bottom right) rotated 45 degrees counterclockwise? G S Cameren
Top

A synod is an ecclesiastical conference. The first use of the word was in the Middle Ages.
Does anyone know how the word came to be applied to moon phases?
Any historians of science here? Any etymologists?
cheers,
WSO
Top

Interesting matchups between waxing and waning phases
of Luna!

I kinda like the concept!
You do not have the required permissions to view the files attached to this post.
Orin

A synod is an ecclesiastical conference. The first use of the word was in the Middle Ages.
Does anyone know how the word came to be applied to moon phases?
Any historians of science here? Any etymologists?
cheers,
WSO

https://www.etymonline.com/word/synod?ref=etymonline_crossreference wrote:
SYNOD (n.) late 14c., "ecclesiastical council," from Late Latin synodus, from Greek synodos "assembly, meeting; a coming together, conjunction of planets," from syn- "together" (see syn-) + hodos "a traveling, journeying; a manner or system (of doing, speaking, etc.); a way, road, path," a word of uncertain origin. Earlier in English as sinoth (early 12c.). Used by Presbyterians for "assembly of ministers and other elders" from 1593 to c. 1920, when replaced by General Council.

EXODUS: late Old English, the second book of the Old Testament, from Latin exodus, from Greek exodos "a military expedition; a solemn procession; departure; death," literally "a going out," from ex "out" (see ex-) + hodos "a way, path, road; a ride, journey, march," figuratively "way out, means," a word of uncertain origin. The book is so called because it tells of the departure of the Israelites from Egypt under the leadership of Moses. General sense (with lower-case -e-) "departure from a place," especially "the migration of large bodies of people or animals from one country or region to another," is from 1620s.

Sorry, I'm neither, but this one seems to make sense ...

The Greek "sunodos" comes from putting together "sun" ("with", "together") and "odos" ("path"). So that would be an explanation of the Greek word "sunodos" being used for a meeting, a "coming together of paths". https://en.wiktionary.org/wiki/synod#English From this, a "synodic period" is measured by determining how long it takes a celestial object to go from one conjunction to another. And most often, this is a conjunction relative to our Sun (viewed from Earth). For this instance, how long between successive times at which the Moon is in conjunction with the Sun. That is the most naturally observed timing for a lunar month, since the phases of the Moon will go through their complete cycle in exactly the time it takes for such a conjunction to recur. Because the Earth makes an appreciable amount of progress in its orbit around the Sun during a lunar synodic period, the Moon actually has to travel a bit more than once around the Earth to complete a synodic period. So its synodic period (29.5 days) is a bit longer than its sidereal period (27.3 days). https://en.wikipedia.org/wiki/Orbital_period

So, in astronomy, for bodies in our Solar system, many of which have observable phases, it came to be that "synodic period" was used for the apparent conjunctions with the Sun (really, the alignment of the object X, the Earth, and the Sun), while "sidereal" was used to distinguish the apparent conjunction of bodies with fixed stars. And so, for the Moon, the synodic and sidereal months are so defined. Since "synodic" really came from the term for meetings, I can imagine the history of the term could have come out differently, considering that the sidereal month is measured based on a meeting as well.
Mark Goldfain
Top

Thanks so much for the thoughtful analysis! Very plausible conjecture about the conflation of meeting/gathering>heavenly body conjunction.
Still might be interesting to know when and by whom the second meaning of 'synodic' was coined. As a word-nerd I can't help being curious,but it may just be lost in the mist of history...
best, WSO
Top

My pleasure. I felt like I'd probably figured out the way the terms progressed, given the information available.
But, as @FloridaMike is fond of pointing out, "Certainty is an emotion."

I agree, it would be nice to learn who actually coined "synodic" for the astronomical use.
Sometimes I see mentions of first uses of terms from apparently grand literature searches. I wonder how that kind of research is done. Maybe "Google books" will be the way to do it in the future.

There is a source: http://www.etymology-online.com/synodic that indicates that Robert Shirley Richardson used the term in a 1959 publication and George Nichols Packer used it in 1897. But I doubt that those are anywhere near the first use of the term in this way. The synodic period of the Moon was relevant back in the studies of Copernicus, though I have no idea what he would have called it.
Mark Goldfain
Top
11 posts • Page 1 of 1