Sprite Lightning at 100,000 Frames Per Second

Explanation: What causes sprite lightning? Mysterious bursts of light in the sky that momentarily resemble gigantic jellyfish have been recorded for over 30 years, but apart from a general association with positive cloud-to-ground lightning, their root cause remains unknown. Some thunderstorms have them -- most don't. Recently, however, high speed videos are better detailing how sprites actually develop. The featured video, captured in mid-2019, is fast enough -- at about 100,000 frames per second -- to time-resolve several sprite "bombs" dropping and developing into the multi-pronged streamers that appear on still images. Unfortunately, the visual clues provided by videos like these do not fully resolve the sprite origins mystery. High speed vidoes do indicate to some researchers, though, that sprites are more likely to occur when plasma irregularities exist in the upper atmosphere.

Very interesting! Makes one wonder what else is out there they we haven’t stumbled across yet!

(There is a typo in the “High speed videos” link at the bottom of the article.)
Top

I'm speechless! I know about Sprites; just nothing about them! I guess I still don't! They have been seen from air planes! I just thought they were lightning and let it go at that! Wow!

ISS044-E-45576_1024.jpg
You do not have the required permissions to view the files attached to this post.
Orin

Amazing what can be done with millions of volts and thousands of amps in a partial vacuum. It does seem that the initial cover picture was given a false color and background though.
Top

Polarity ?, Some explanations say that they only occur in thunderstorms and only on continents, not on the sea, is that correct?
Top

The bombs and other features seem to be moving at about 1/10 light speed....
Top

Sa Ji Tario wrote: ↑Tue Jan 05, 2021 12:53 am
Polarity ?, Some explanations say that they only occur in thunderstorms and only on continents, not on the sea, is that correct?

Also, mountain chains like the Andes contribute to vertical wind shear which promotes positive lightning by displacing the upper positive charge region of a thundercloud, exposing it to the ground below. 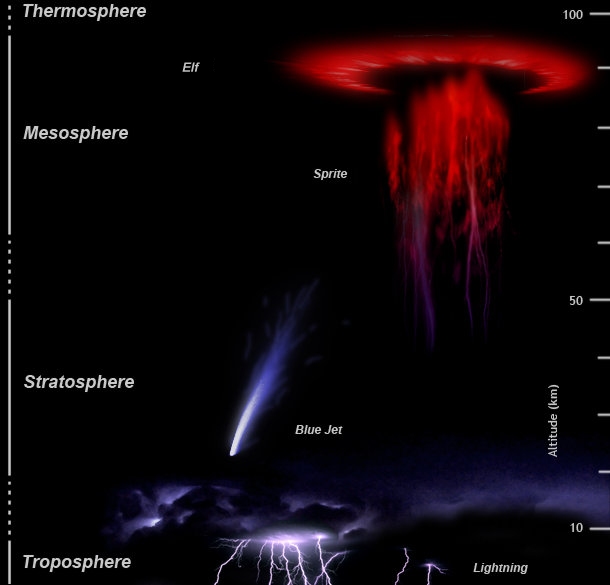 Different types of electrical phenomena in the atmosphere


<<Sprites have been observed over North America, Central America, South America, Europe, Central Africa (Zaire), Australia, the Sea of Japan and Asia and are believed to occur during most large thunderstorm systems. In 2016, sprites were observed during Hurricane Matthew's passage through the Caribbean. [However,] the role of sprites in the tropical cyclones is presently unknown.

Sprites appear as luminous reddish-orange flashes. They often occur in clusters above the troposphere at an altitude range of 50–90 km. Sprites are cold plasma phenomena that lack the hot channel temperatures of tropospheric lightning, so they are more akin to fluorescent tube discharges than to lightning discharges. Sprites are associated with various other upper-atmospheric optical phenomena including blue jets and ELVES. Sprites or red sprites are large-scale electrical discharges that occur high above thunderstorm clouds, or cumulonimbus, giving rise to a quite varied range of visual shapes flickering in the night sky. They are usually triggered by the discharges of positive lightning between an underlying thundercloud and the ground.

As a result of their greater power, positive lightning strikes are considerably more dangerous than negative strikes. Positive lightning produces both higher peak currents and longer continuing currents, making them capable of heating surfaces to much higher levels which increases the likelihood of a fire being ignited. The long distances positive lightning can propagate through clear air explains why they are known as "bolts from the blue", giving no warning to observers.

Despite the popular misconception that these are positive lightning strikes due to them seemingly originating from the positive charge region, observations have shown that these are in fact negative flashes. They begin as IC flashes within the cloud, the negative leader then exits the cloud from the positive charge region before propagating through clear air and striking the ground some distance away.

Positive lightning has also been shown to trigger the occurrence of upward lightning flashes from the tops of tall structures and is largely responsible for the initiation of sprites several tens of kilometers above ground level. Positive lightning tends to occur more frequently in winter storms, as with thundersnow, during intense tornadoes and in the dissipation stage of a thunderstorm. Huge quantities of extremely low frequency (ELF) and very low frequency (VLF) radio waves are also generated.>>

I made a time lapse of lightning several years ago. Most of the bolts start at a radio tower, and shoot upwards. Would those be positively charged?
Click to play embedded YouTube video.
Top

Most of the bolts start at a radio tower, and shoot upwards.

Would those be positively charged?

APOD Robot wrote: ↑Mon Jan 04, 2021 5:06 am
Explanation: High speed vidoes do indicate to some researchers, though, that sprites are more likely to occur when plasma irregularities exist in the upper atmosphere.


<<A pinch is the compression of an electrically conducting filament by magnetic forces, or a device that does such. The conductor is usually a plasma, but could also be a solid or liquid metal. Pinches were the first type of device used for controlled nuclear fusion.

The phenomenon may also be referred to as a Bennett pinch (after Willard Harrison Bennett), electromagnetic pinch, magnetic pinch, pinch effect or plasma pinch.

The first creation of a Z-pinch in the laboratory may have occurred in 1790 in Holland when Martinus van Marum created an explosion by discharging 100 Leyden jars into a wire. The phenomenon was not understood until 1905, when Pollock and Barraclough investigated a compressed and distorted length of copper tube from a lightning rod after it had been struck by lightning. Their analysis showed that the forces due to the interaction of the large current flow with its own magnetic field could have caused the compression and distortion.

The experimental and theoretical progress on pinches was driven by fusion power research. In their article on the "Wire-array Z-pinch: a powerful x-ray source for ICF", M G Haines et al., wrote on the "Early history of Z-pinches".

In 1946 Thompson and Blackman submitted a patent for a fusion reactor based on a toroidal Z-pinch with an additional vertical magnetic field. But in 1954 Kruskal and Schwarzschild published their theory of MHD instabilities in a Z-pinch. In 1956 Kurchatov gave his famous Harwell lecture showing nonthermal neutrons and the presence of m = 0 and m = 1 instabilities in a deuterium pinch. In 1957 Pease and Braginskii independently predicted radiative collapse in a Z-pinch under pressure balance when in hydrogen the current exceeds 1.4 MA. (The viscous rather than resistive dissipation of magnetic energy discussed above and in would however prevent radiative collapse).

In 1958, the world's first controlled thermonuclear fusion experiment was accomplished using a theta-pinch machine named Scylla I at the Los Alamos National Laboratory. A cylinder full of deuterium was converted into a plasma and compressed to 15 million degrees Celsius under a theta-pinch effect. Lastly, at Imperial College in 1960, led by R Latham, the Plateau–Rayleigh instability was shown, and its growth rate measured in a dynamic Z-pinch.>>