A partial solar eclipse is nice to see. A Solar transit of the ISS is too. But both a the same time is a real rare event. 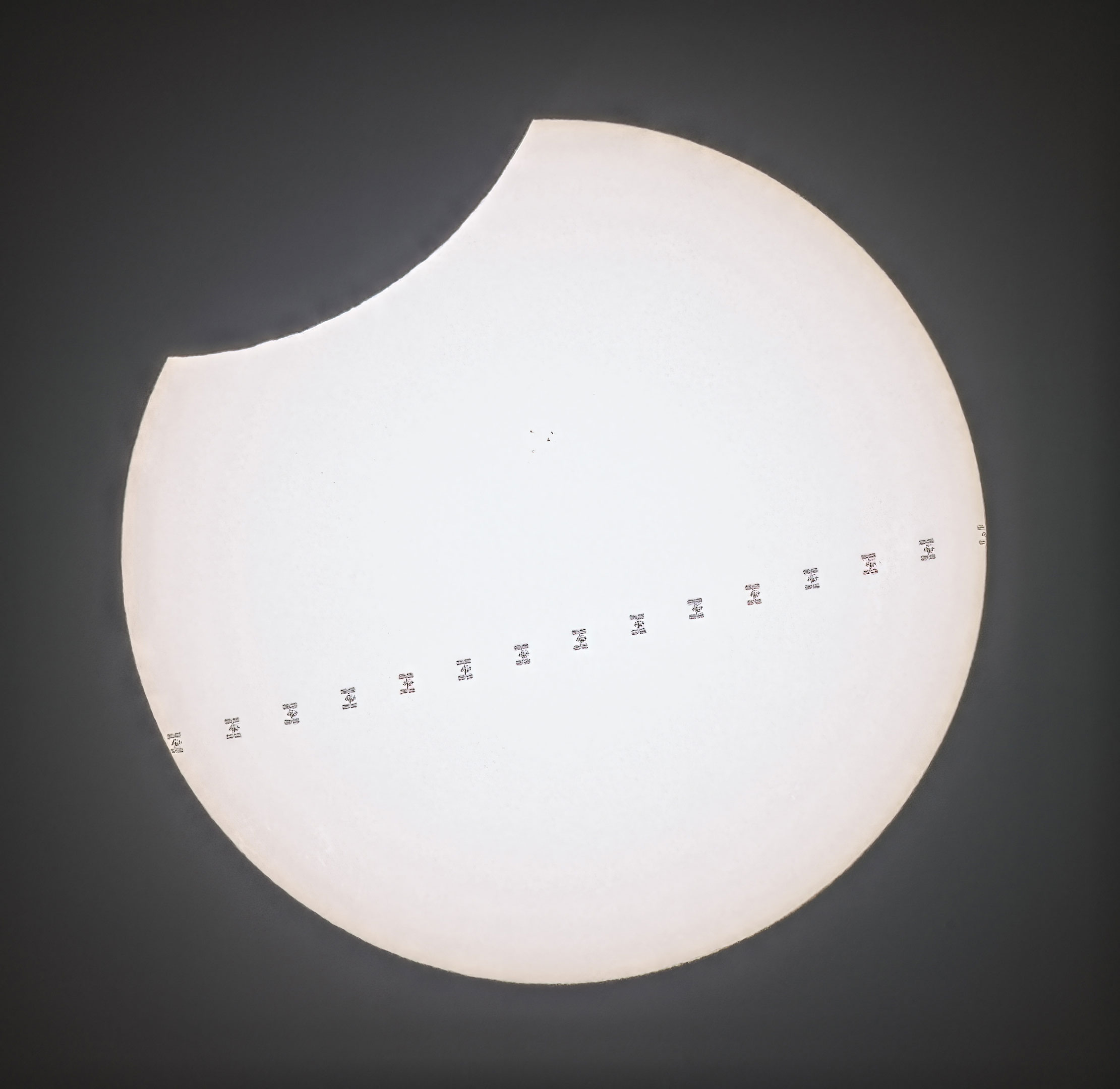 The Crux and the Coalsack 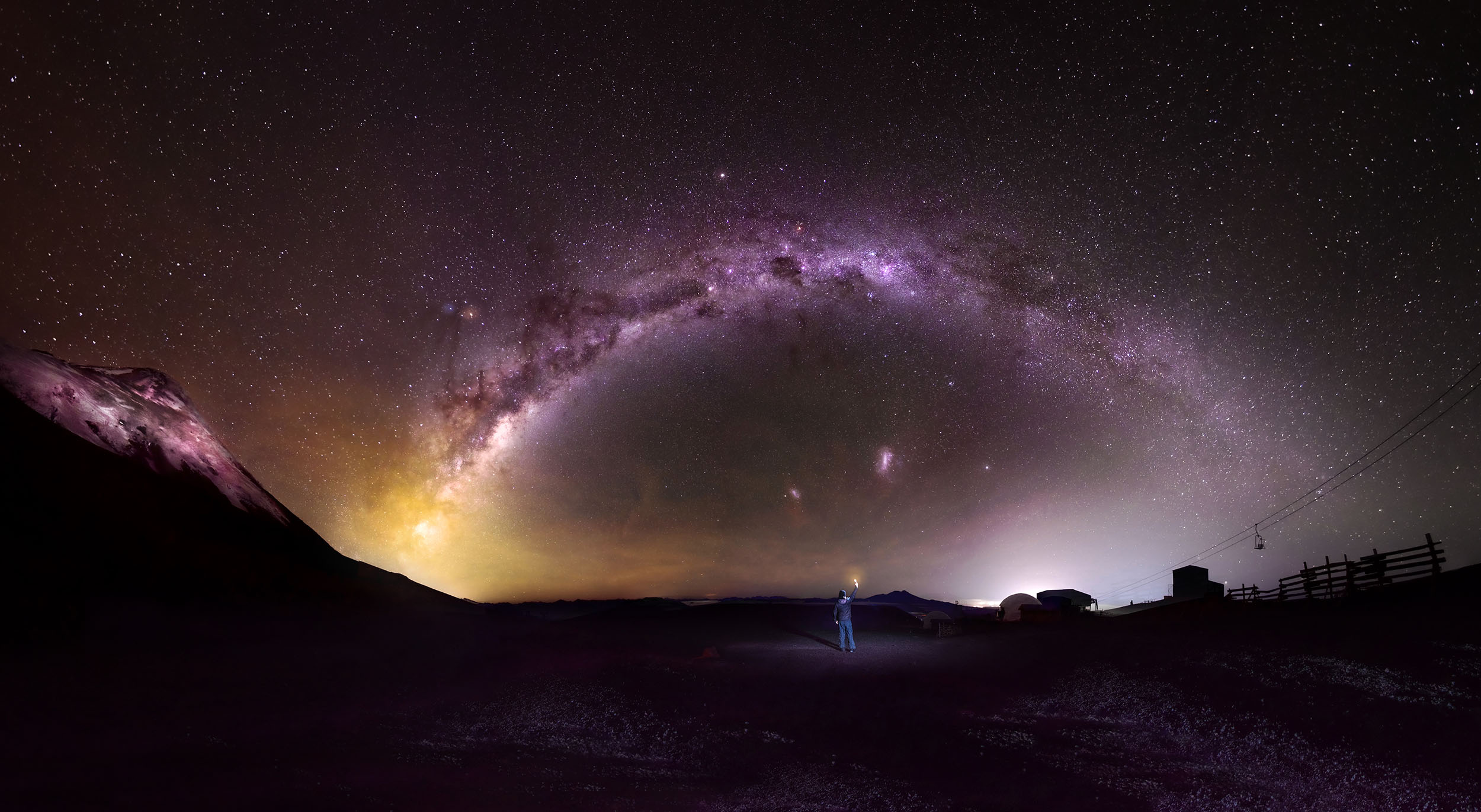 After a battle with the clouds I manage to capture the partial eclipse. The processing technique in the black Sun image is called Solarization.
Camera Model Nikon D600, Shooting Date/Time 10/06/2019 11:15, Author Chris Kotsiopoulos, Sigma 400mm APO Macro lens
You do not have the required permissions to view the files attached to this post.
Top

The Runaway Star of SH2-27
https://www.astrobin.com/39tu57/B/
Copyright: Mathew Ludgate
SHO_IR_master_4000.jpg
SH2-27 is an extremely large ionisation nebula in Ophiucus, which spans 13 degrees or 26 full moons across the sky. SH2-27 is ionised by Zeta Ophiuchi (Zeta Oph), which is a massive super-hot O-type star. Zeta Oph is a run away star, and is somewhat famous after some great images of its bow shockwave were published by NASA from the WISE and Spitzer infrared space telescopes.

This a composite image combining my data with the infrared bow shock image from the WISE IR telescope, courtesy of NASA/JPL-Caltech/UCLA. This adds some nice extra detail to the bow shock region.

In this image Zeta Oph is moving from the top left towards the bottom right. You can see a large flat OIII bow shock which spans ~1.35 degrees, and has small ‘contrails’ streaking out behind the shockwave along the direction of travel. In front of the main shockwave there is a further area of fainter OIII emission, which appears to be a secondary bow shock.

This is a 3 panel mosaic which was captured from Dunedin, New Zealand in May and June 2021 using a Nikon 200mm f/2 lens and an ASI6200MM Pro camera with Chroma filters. The total exposure was 30.4 hours.

Cheers,
Mathew
You do not have the required permissions to view the files attached to this post.
Top

Special events require a long, detailed pre-planning - and then usually have the consequence that you are somewhere in the pouring rain under a closed cloud cover. Or you give the whole thing a less important meaning and think "this time - without stress - very comfortably in the garden, what is 7% coverage ..."
Yes, it was actually planned that way. My car should have been in the workshop at 9 a.m. and then I just went into the garden with the Dobsonian. Too bad I was up before my alarm clock went off and for some reason checked the upcoming ISS transits online ... but wait a minute, today? during the solar eclipse? and the central line is only a good 30km away? and the ISS as close as possible, in other words really big?
From then on it had to be quick. Postpone the workshop appointment, scout out the observation site online, load the car, drive there. So far so good, the actual partial darkness was only a minor matter from then on. So I arrived at the planned place after the first contact, set up and tried to take the first photos. And then what? Sure, clouds !! Increasingly dense, the chances of seeing something dwindled. But what do you do?
From the idyllic hill I had a beautiful view over the valley and saw more blue sky and sunshine in a westerly direction. A new location was searched for, found and somehow it was also reachable. I didn't care where it was by now. If necessary also right next to the street. It should take me about half an hour for the almost 20km as the crow flies - arrival then, according to the navigation system, less than 10 minutes before the event. Most of the equipment was thrown into the car assembled and then let's go.
Pure thrills, slow trucks, lots of speed cameras and police checks and finally a construction site traffic light - always with an eye on the arrival time.
When the shadow of the ISS finally flickered through the display and the file was actually on the memory card, I was finally able to take a deep breath. But hey, everyone can do it easy? So much for the topic of "just no stress"

And at the end of the day, the car came to the workshop. 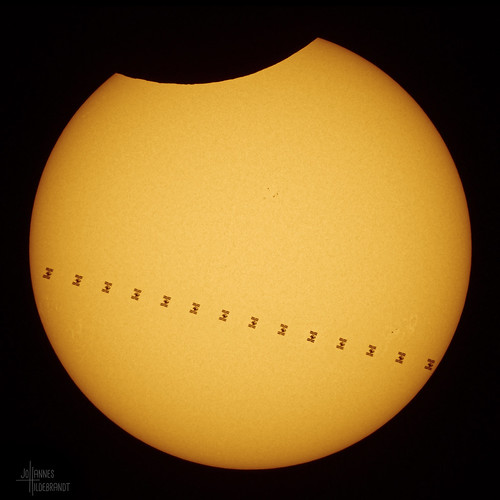 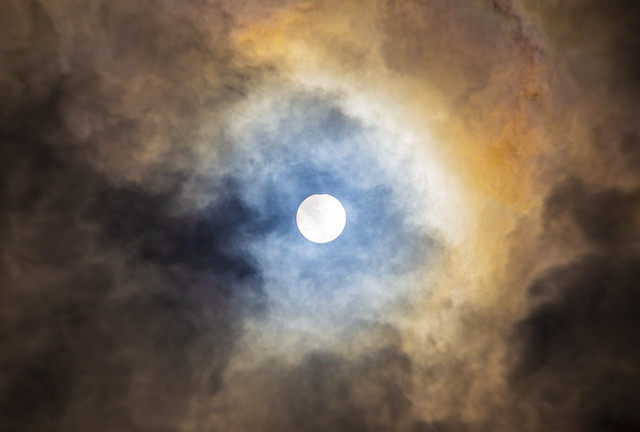 IC1396_MC_small.jpg
You do not have the required permissions to view the files attached to this post.
Marco Cosmacini
Villaverde Observatory
Italy
Top

Aircraft transits the Moon with Venus in conjunction 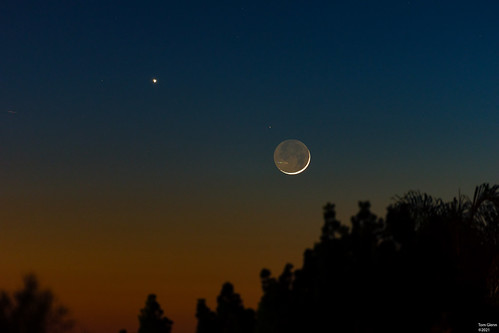 Aircraft transits the Moon with Venus in conjunction by Tom Glenn, on Flickr

An aircraft transits the young crescent Moon in this image, captured on June 11, 2021, at 21:04 PDT, from San Diego, CA. Venus and the Moon were in conjunction at the time, and the image was captured approximately one hour after sunset, with the 2.8% illuminated Moon resting just 3 degrees above the local horizon. The aircraft is visible only by its streak of colored lights, resulting from the 2s exposure, as it transits the "Earthshine" side of the Moon. There are several other aircraft visible in frame. The prominent star near the Moon is Mebsuta (Epsilon Geminorum, magnitude +3). The time of the image coincides with the end of nautical twilight, and the beginning of astronomical twilight, and there is still a visible color gradient from deep red to blue in the sky. The image was captured with a Nikon D5600 using a 70-200mm zoom lens at 200mm, f/2.8, ISO 100, 2s.
Top

June is always a great month for imaging with the ocean marine layer covering the lower altitude city light. Skies at 4,200' in Julian, CA are then 21.5+ SQM nearly every day.

This is the first of three objects I acquired over 12 days. Only 4 days were overcast when the wind blew the marine layer east into and over the mountains.

"The Wild Duck Cluster (also known as Messier 11, or NGC 6705) is an open cluster of stars in the constellation Scutum (the Shield). It was discovered by Gottfried Kirch in 1681. Charles Messier included it in his catalogue of diffuse objects in 1764. Its popular name derives from the brighter stars forming a triangle which could resemble a flying flock of ducks (or, from other angles, one swimming duck). The cluster is located just to the east of the Scutum Star Cloud midpoint.

https://www.astrobin.com/nbjsqb/
You do not have the required permissions to view the files attached to this post.
Top 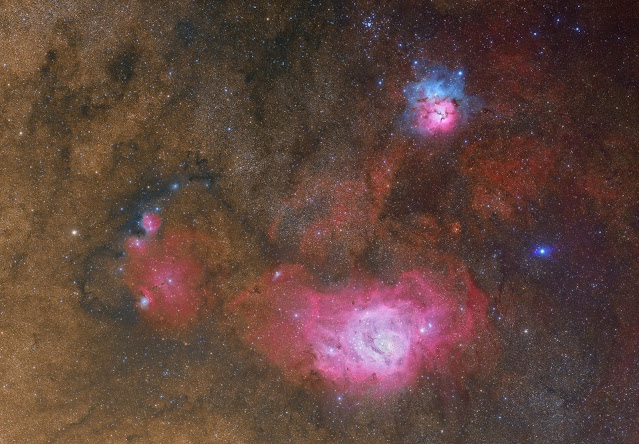 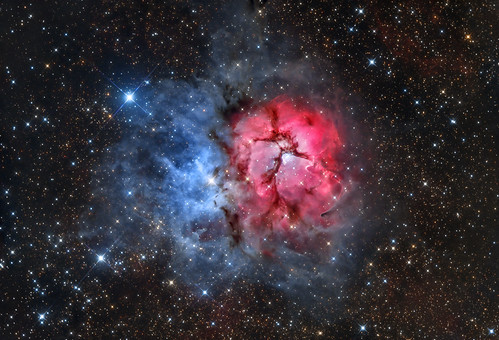 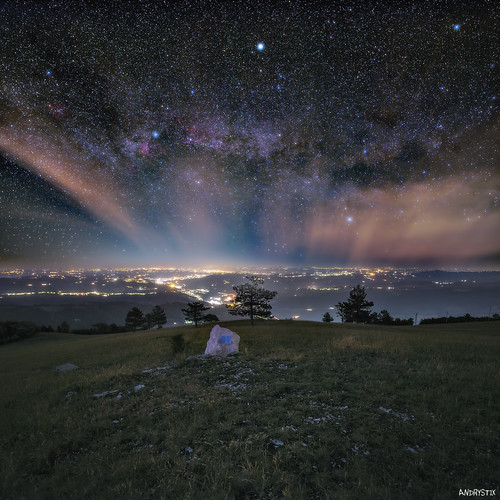 Designed between the 1970s and 1980s, the Hubble Space Telescope went into space on April 24, 1990, its first image being taken on May 20 of that same year, more than 31 years ago, the first image being the Wishing Well Cluster (NGC 3532).
https://www.nasa.gov/content/hubbles-first-light

This cluster has this name because it resembles silver coins thrown at the bottom of a well, in addition to other names such as: American football ball or a cluster of fireflies.

Discovered in South Africa by Frenchman Nicolas Louis de Lacaille in 1752, it is an object easily seen with the naked eye in the southern hemisphere.

We are came back to shoot night landscapes this year too.
Once again, we are in the darkest spot of Salento, where this lonely tree was our model for a night.
For my first time I was able to take some airglow in this area.
200°+ nightscape pano with many constellation inside that I will show you in another post.
Every night out an amazing experience, with silence and darkness sorrounding us.

Starstree_apod.jpg
You do not have the required permissions to view the files attached to this post.
Pierandrea Folle 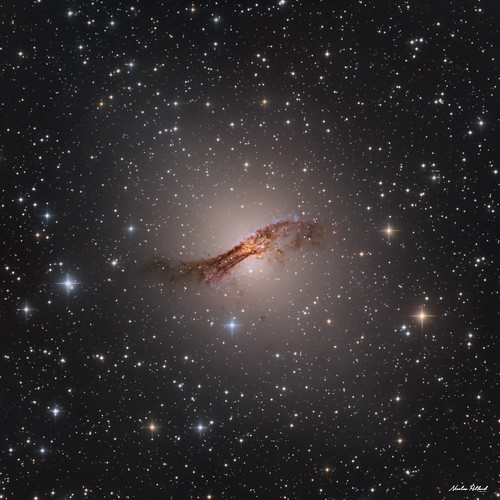 "Sh2-82 is a beautiful cloud of gas and dust consisting of an emission nebula enveloped by a hazy reflection nebula. It is embedded in the dark nebula LDN 727 and is the site of some star formation and young stellar objects. Located at a distance of approximately 3600 light years, Sh2-82 is ionized by the star HD 231616, which can be seen near the center."

https://www.astrobin.com/fp6c68/
You do not have the required permissions to view the files attached to this post.
Top

Something from about this time last year taken under pristine transparency on the island of Aegina and 40 minutes southwest of Athens by ferry. As for the foreground, something very dear to everyone's heart!


star-trails-aegina-statue-mother-2020.jpg
You do not have the required permissions to view the files attached to this post.
Anthony Ayiomamitis
http://www.perseus.gr
Top

My third and final object for the June dark cycle with skies at 21.5+ SQM.

This object was a particular challenge because I could only capture it from 9:30 to 11:30 PM. After that is was too low to get the 2" average FWHM I was aiming for.

Because I could only capture 2 hours each evening, it took over a week to get what you see here. But I think it was worth it. (-:

"NGC 3718, also called Arp 214, is a galaxy located approximately 52 million light years from Earth in the constellation Ursa Major. It is either a lenticular or spiral galaxy.

NGC 3718 has a warped, s-shape. This may be due to gravitational interaction between it and NGC 3729, another spiral galaxy located 150,000 light-years away."

https://www.astrobin.com/mhicxj/
You do not have the required permissions to view the files attached to this post.
Top 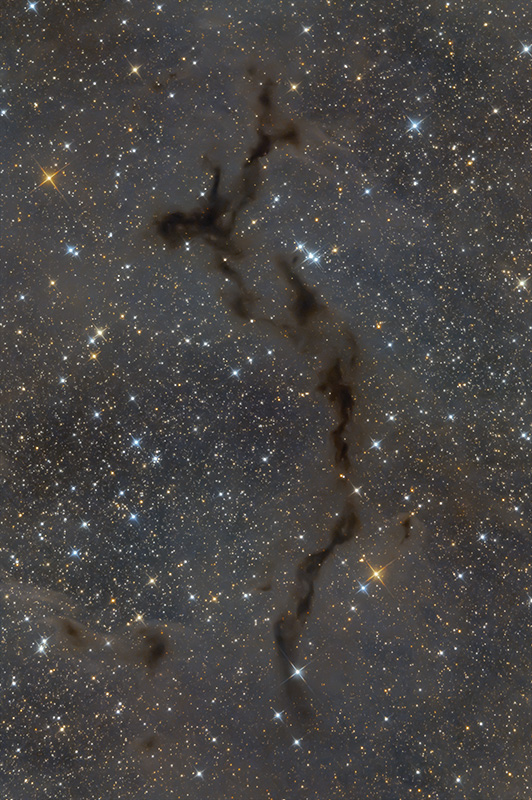 The full is here : https://www.astrobin.com/vioc2p/

A 21°x42° view which covers most of the constellations Andromeda and Lacerta is presented. The center of the photographed region lies about 20° south of the galactic plane and is rich of high galactic latitude nebulae. Most famous objects are M33 (Triangulum galaxy), M31 (Andromeda Galaxy) and SH2-126, a large HII region in Lacerta.

Views below are scaled down. Larger version can be loaded by clicking on the image, full resolution pictures (>100 MPixel, using a Javascript viewer), selected details and further information can be found on my homepage 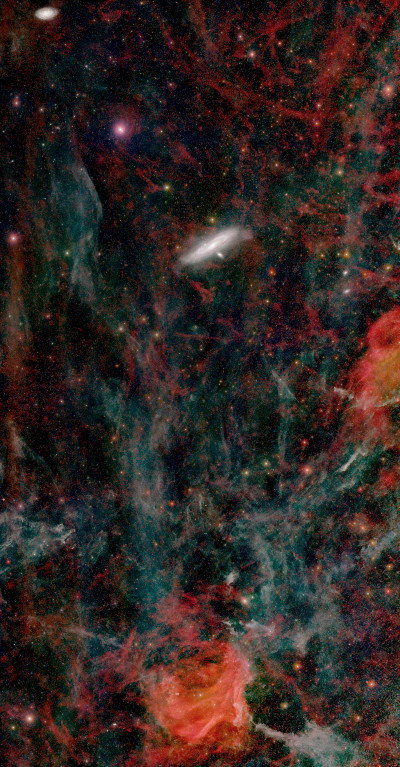 In that orientation it looks like M31 and M33 are faling into the mouth of a red monster ... 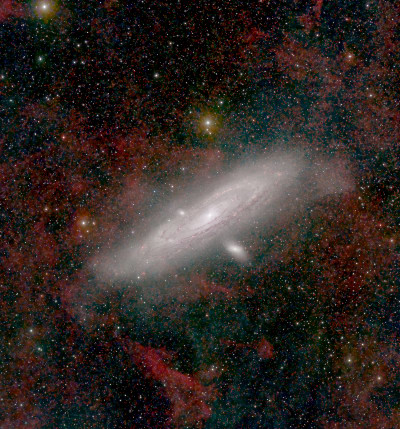 But the real monster is M31, currently eating M32 (the smaller one) and M110. The remnants of previous meals are visible in form of a irregularly shaped halo. 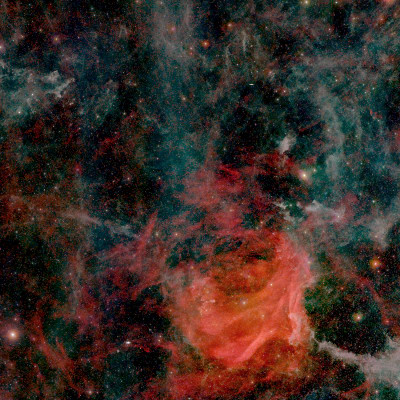 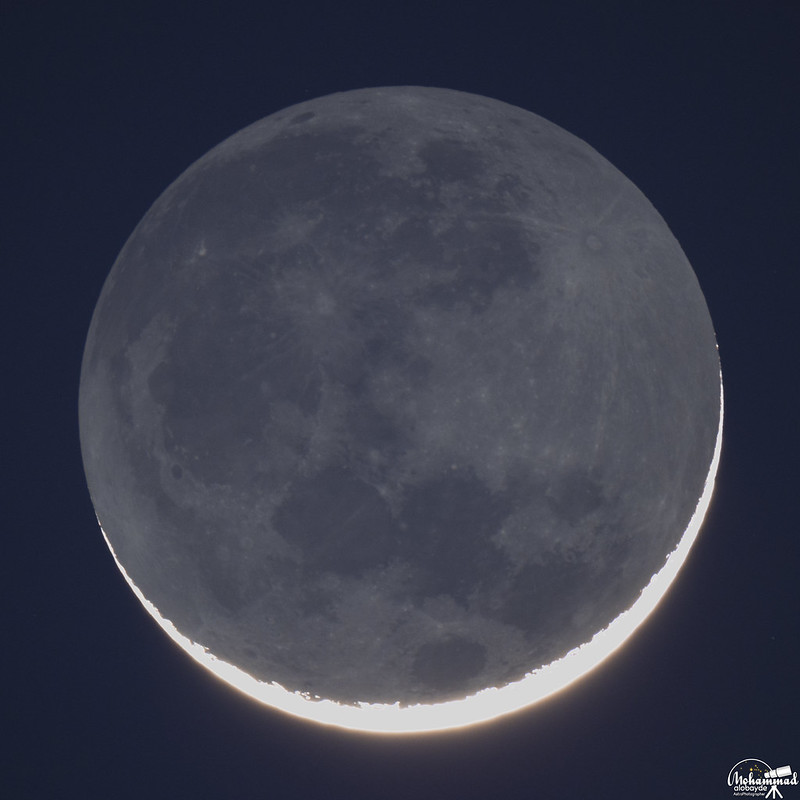