Explanation: How many moons does Saturn have? So far 82 have been confirmed, the smallest being only a fraction of a kilometer across. Six of its largest satellites can be seen here in a composite image with 13 short exposure of the bright planet, and 13 long exposures of the brightest of its faint moons, taken over two weeks last month. Larger than Earth's Moon and even slightly larger than Mercury,Saturn's largest moon Titan has a diameter of 5,150 kilometers and was captured making nearly a complete orbit around its ringed parent planet. Saturn's first known natural satellite, Titan was discovered in 1655 by Dutch astronomer Christiaan Huygens, in contrast with several newly discovered moons announced in 2019. The trail on the far right belongs to Iapetus, Saturn's third largest moon. The radius of painted Iapetus' orbit is so large that only a portion of it was captured here. Saturn leads Jupiter across the night sky this month, rising soon after sunset toward the southeast, and remaining visible until dawn.

I tried something similar with Neptune & Triton before, but I only made one step for 1/2 period of rotation of Triton: 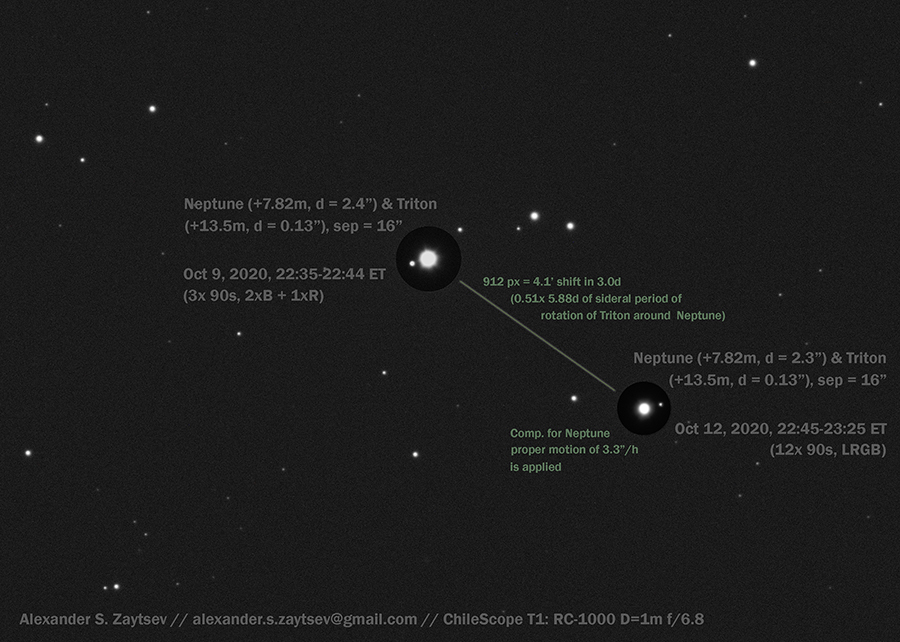 the plane of Iapetus' orbit is 15.47° to Saturn's equator. It really shows!
Top

One of the moons is hard to find! Takes a keen eye!
t8k7f6nvr8j31.jpg
You do not have the required permissions to view the files attached to this post.
Orin

I really love images like this. Great work!
I'm curious as to why all of the objects have "auras" around them (not sure of the best term ... a spread of light around each object). Is it an artifact of the times of the exposures on the camera?

I wonder if there was ever a time when Titan was a planet. According to Wikipedia's article on Titan, modelling of its formation has led to the belief that it most likely formed from an accretion disk around Saturn, rather than that it was captured after a more distant origin.
Mark Goldfain
Top

the first alien suspect should be Iapetus. Why does it orbit in the wrong plane?
Top

<<The orbit of Iapetus is somewhat unusual. Although it is Saturn's third-largest moon, it orbits much farther from Saturn than the next closest major moon, Titan. It has also the most inclined orbital plane of the regular satellites; only the irregular outer satellites like Phoebe have more inclined orbits. Because of this distant, inclined orbit, Iapetus is the only large moon from which the rings of Saturn would be clearly visible; from the other inner moons, the rings would be edge-on and difficult to see. The cause of this highly inclined orbit of Iapetus is unknown; however, it is not likely to have been captured. One suggestion for the cause of Iapetus's orbital inclination is an encounter between Saturn and another planet.>>

ABSTRACT: Saturn's moon, Iapetus, has an orbit in a transition region where the Laplace surface is bending from the equator to the orbital plane of Saturn. The orbital inclination of Iapetus to the local Laplace plane is ~ 8°, which is unexpected because the inclination should be ~ 0 if Iapetus formed from a circumplanetary disk on the Laplace surface. It thus appears that some process has pumped up Iapetus's inclination while leaving its eccentricity near zero (~ 0.03 at present). Here, we examined the possibility that Iapetus's inclination was excited during the early solar system instability when encounters between Saturn and ice giants occurred. We found that the dynamical effects of planetary encounters on Iapetus's orbit sensitively depend on the distance of the few closest encounters. In 4 out of 10 instability cases studied here, the orbital perturbations were too large to be plausible. In one case, Iapetus's orbit was practically unaffected. In the remaining five cases, the perturbations of Iapetus's inclination were adequate to explain its present value. In three of these cases, however, Iapetus's eccentricity was excited to >0.1–0.25, and it is not clear whether it could have been damped to its present value (~ 0.03) by a subsequent process (e.g., tides and dynamical friction from captured irregular satellites do not seem to be strong enough). Our results therefore imply that only 2 out of 10 instability cases (~20%) can excite Iapetus's inclination to its current value (~30% of trials lead to >5°) while leaving its orbital eccentricity low.

So Iapetus's orbit proves its origin with the eccentricity test.
It's Saturn system's ok, just deformed in an accident.
Top
10 posts • Page 1 of 1