Today's APOD shows us an interesting perspective of M43. But we need to compare it with other images to get a handle on what we are seeing. 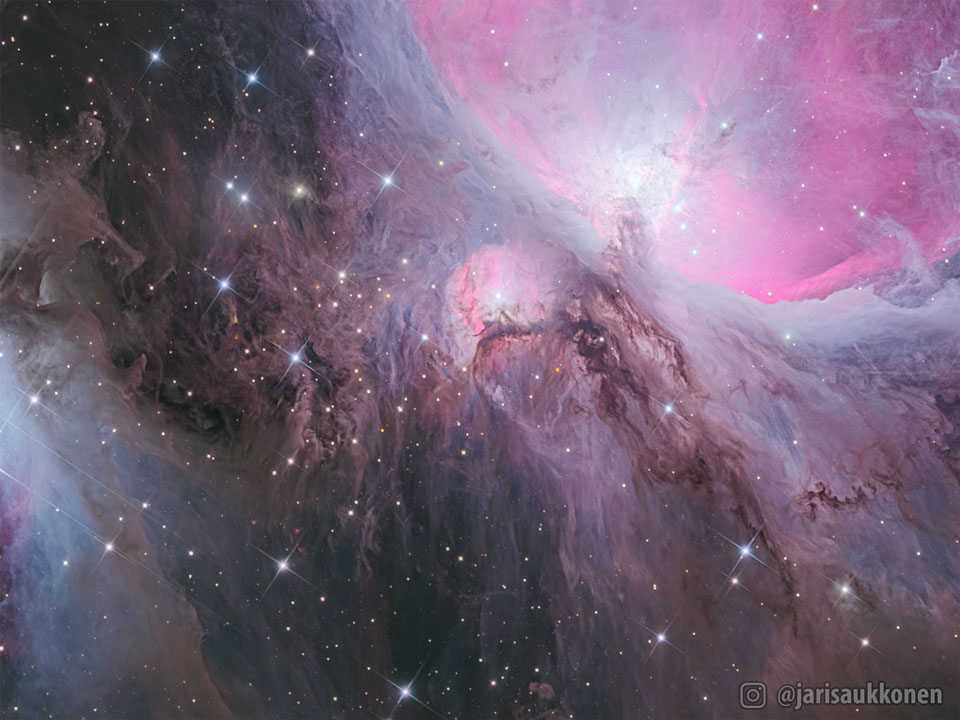 3) The Trapezium, the small group of hot stars that ionize the Orion Nebula

4) A bridge of dust that may start in M42. It bifurcates so that one branch reaches over to M43 and the broader stream continues past M43


Let's take a closer (Hubble) look at M43 in itself, and let's look at M43 and M42 as the "bonded pair" that they are (which is an expression that is often used about two cats that are friends):


As you can see in the Hubble picture of M43, the dark dust lane that passes in front of the face of M43 looks quite dark. Note, too, that the left edge of this dark dust lane glows red. Note at lower left how a detached wavelet of red ionized gas is streaming away from the dark nebula.

But as Jari Saukkonen's picture shows you, there are a lot of different forces acting on the dust here. The star that is ionizing M43, NU Orionis, adds its own stellar wind into the mix, since it is a star of spectral class O9. 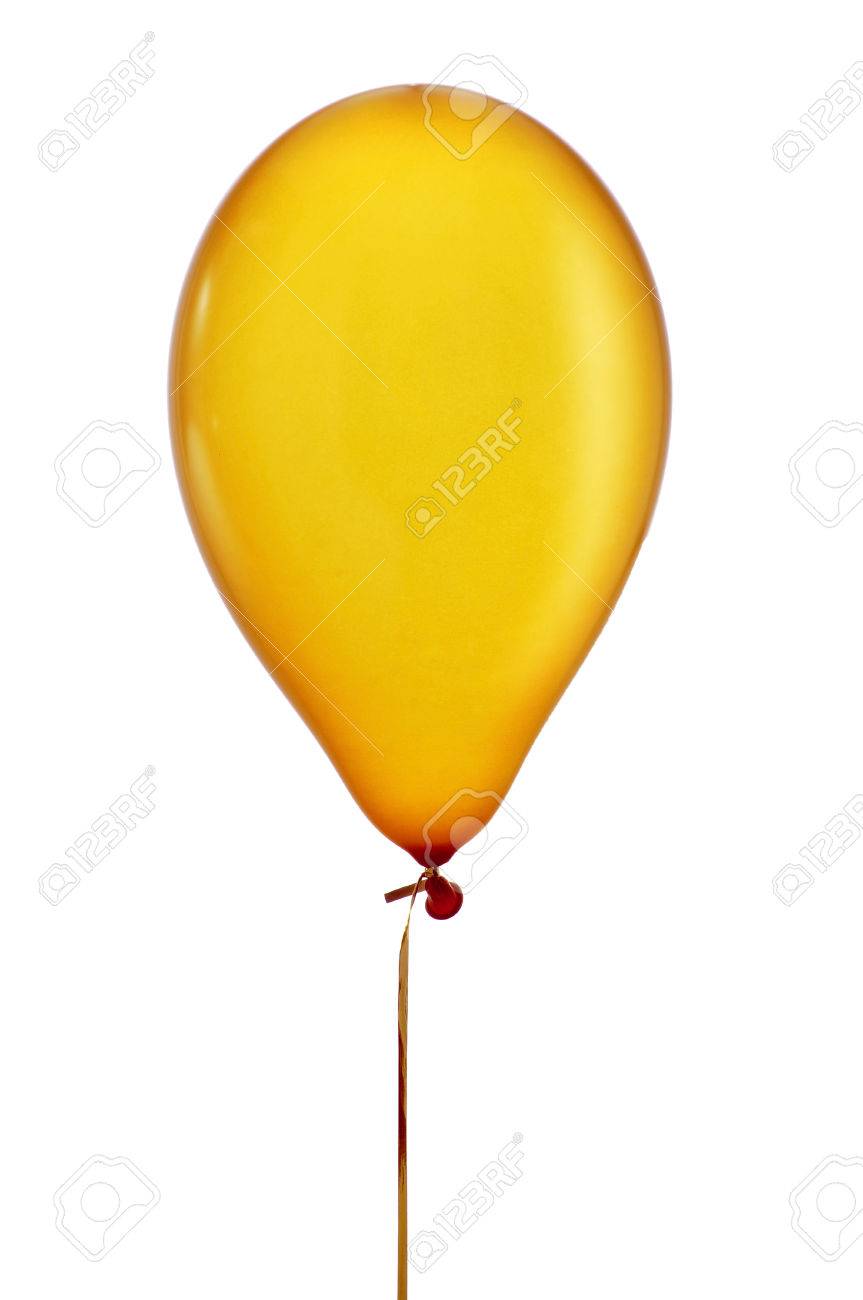 A balloon tied with a string.


The picture by Göran Nilsson at left shows you that M42 and M43 are separated by a thick dust lane from the next relatively prominent nebula, the Running Man nebula. More interestingly, Nilsson's image brings home the message that the dust lanes that separate M42 from M43 almost look like dark strings, as if they had been tied at the end of the "balloon" of M42 to keep the gas from leaking out of it. And M43 is like the little bit of balloon material that is below the strings that have been tied around the inflated gas-filled part of it. 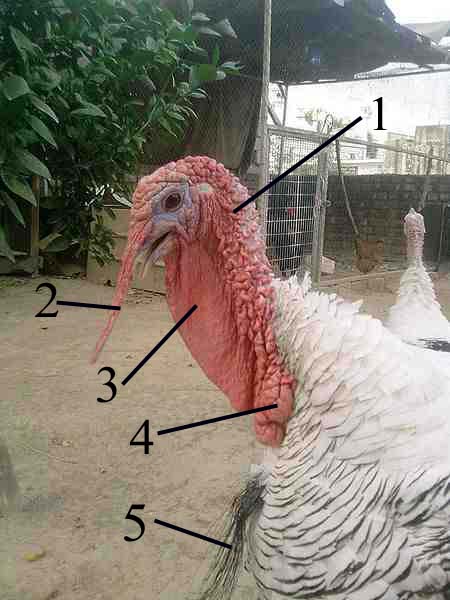 
<<The domestic turkey (Meleagris "gallopavo" ["chicken peacock"] domesticus) is a large fowl, one of the two species in the genus Meleagris and the same species as the wild turkey. Although turkey domestication was thought to have occurred in central Mesoamerica at least 2,000 years ago, recent research suggests a possible second domestication event in the southwestern United States between 200 BC and AD 500. However, all of the main domestic turkey varieties today descend from the turkey raised in central Mexico that was subsequently imported into Europe by the Spanish in the 16th century. Ancient Mesoamericans domesticated this subspecies, using its meat and eggs as major sources of protein and employing its feathers extensively for decorative purposes. The Aztecs associated the turkey with their trickster god Tezcatlipoca, perhaps because of its perceived humorous behavior.

The 16th-century English navigator William Strickland is generally credited with introducing the turkey into England. His family coat of arms — showing a turkey cock as the family crest — is among the earliest known European depictions of a turkey. English farmer Thomas Tusser notes the turkey being among farmer's fare at Christmas in 1573. Turkey was something of a luxury in the UK, with goose or beef a more common Christmas dinner among the working classes. In Charles Dickens' A Christmas Carol (1843), Bob Cratchit had a goose before Scrooge bought him a turkey. The domestic turkey was sent from England to Jamestown, Virginia in 1608. A document written in 1584 lists supplies to be furnished to future colonies in the New World; "turkies, male and female".>>

I spy with my little eye, an eagle head!

Well, the beak is a little blunted. Maybe another bird species would match better...(EDIT: ah, just saw neufer's turkey head.)
You do not have the required permissions to view the files attached to this post.
Last edited by johnnydeep on Thu Oct 07, 2021 1:47 pm, edited 1 time in total.
--
"To B̬̻̋̚o̞̮̚̚l̘̲̀᷾d̫͓᷅ͩḷ̯᷁ͮȳ͙᷊͠ Go......Beyond The F͇̤i̙̖e̤̟l̡͓d͈̹s̙͚ We Know."
Top

I need to add something to my previous post. (And I'm not editing it, because I don't know how many edits I would make! (Like, edited 8 times by Ann. No.)

So. All the dust surrounding M43 and the star inside it, O9V-type NU Orionis, is (in my opinion) clearly the tattered remnants of the birth cocoon of NU Ori. In fact, I'd say that M43, with its round shape and dark dust lanes, resembles the Cocoon Nebula.

And please note the very dark dust lanes crisscrossing the "pink face" of the Cocoon Nebula, and passing right in front of the ionizing star of this nebula, TYC 3608-1446-1, which is of spectral class B1V, just hot enough to ionize a nebula.

I think that the very dark dust lanes very close to the ionizing stars of M43 and the Cocoon Nebula are both remnants of the concentrated pockets of gas and dust that gave birth to these stars.

Certainly there are differences between the Cocoon Nebula and M43. While M43 looks round, M43 looks more like a bubble, as if it had been inflated by the star inside. Obviously NU Ori is a hotter and more powerful star than TYC 3608-1446-1.

Extremely importantly, M43 must have been enormously affected by the presence of the blisteringly hot and powerful Trapezium Cluster that is quite nearby. By contrast, the Cocoon Nebula seems to have formed in isolation.

I think that M43 and the Trapezium may have triggered one another. Clearly the power of the Trapezium is magnitudes greater than the power of NU Ori. Nevertheless, we are talking about two different sites of star formation in rather close proximity that must have sent jets and shock waves in each other's direction through the medium of gas and dust from which they were born.

The Trapezium is so hot that the dust that was surrounding it must have been violently blown away or been "radiation-cooked" into such miniature bits and pieces that it can't form dust lanes any more. 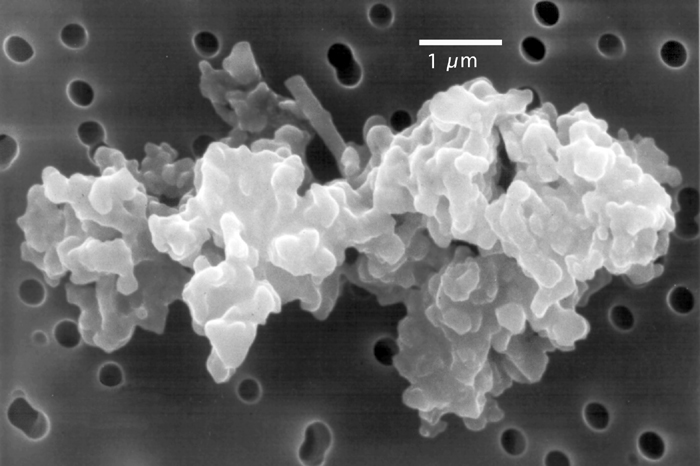 
In the picture above is an interplanetary dust grain. It is so large, uneven and fluffy that we would never find such dust grains in the immediate vicinity of the present-day Trapezium, because the extremely violent onslaught of far ultraviolet light from Theta 1-C Orionis will have destroyed them. But I guess there may be such dust grains in the darkest dust lane that seems to cross the face of M43, because that dust lane is so thick that individual grains shield each other from the onslaught of ultraviolet light from nearby stars.

But make no mistake, the dust lanes near M43 are evaporating, too. 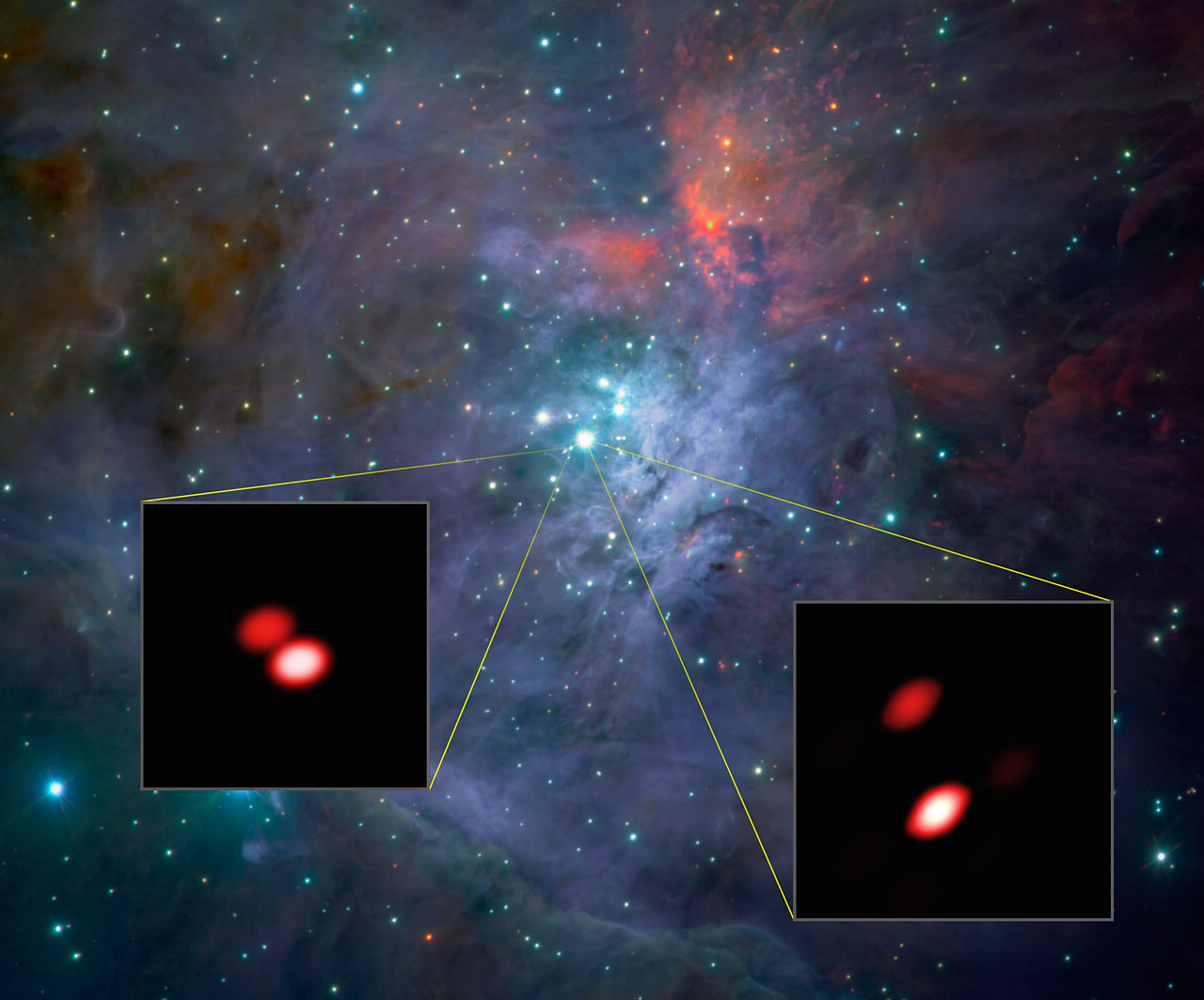 <<Technetium [symbol Tc and atomic number 43] is the lightest element whose isotopes are all radioactive. In 1937, technetium (specifically the technetium-97 isotope) became the first predominantly artificial element to be produced, hence its name (from the Greek τεχνητός, meaning "Craft, Art or Artificial"). The silvery gray, crystalline transition metal lies between manganese and rhenium in group 7 of the periodic table, and its chemical properties are intermediate between those of both adjacent elements. The most common naturally occurring isotope is 99Tc, in traces only. Because even the longest-lived isotope of technetium has a relatively short half-life (4.21 million years), the 1952 detection of technetium in red giants helped to prove that stars can produce heavier elements.

From the 1860s through 1871, early forms of the periodic table proposed by Dmitri Mendeleev contained a gap between molybdenum (element 42) and ruthenium (element 44). In 1871, Mendeleev predicted this missing element would occupy the empty place below manganese and have similar chemical properties. Mendeleev gave it the provisional name ekamanganese (from eka-, the Sanskrit word for one) because the predicted element was one place down from the known element manganese.

One short-lived gamma ray-emitting nuclear isomer, technetium-99m, is used in nuclear medicine for a wide variety of tests, such as bone cancer diagnoses. The ground state of the nuclide technetium-99 is used as a gamma-ray-free source of beta particles. Long-lived technetium isotopes produced commercially are byproducts of the fission of uranium-235 in nuclear reactors and are extracted from nuclear fuel rods.>>

https://en.wikipedia.org/wiki/43_(number) wrote:
Click to play embedded YouTube video.
<<Every solvable configuration of the Fifteen puzzle can be solved in no more than 43 multi-tile moves (i.e. when moving two or three tiles at once is counted as one move). Bobby Fischer (March 9, 1943 – January 17, 2008) was an expert at solving the 15-Puzzle.He had been timed to be able to solve it within 25 seconds; Fischer demonstrated this on November 8, 1972, on The Tonight Show Starring Johnny Carson.>>