Our sun is getting more active again and is really starting to show off. This image, taken on July 14th, shows it in all its glory as seen through an H-alpha telescope. This image was taken in 6 minutes gathering almost 100Gb of data to get this high resolution result.

Sun_disk_ha_14072022.jpg
You do not have the required permissions to view the files attached to this post.
Top

Taken yesterday 15 July, At the rock of the virgin in Biarritz, the sunset with the black spots clearly visible at this moment
Canon 5d mark 3, sigma 150 600mm, at 600mm here 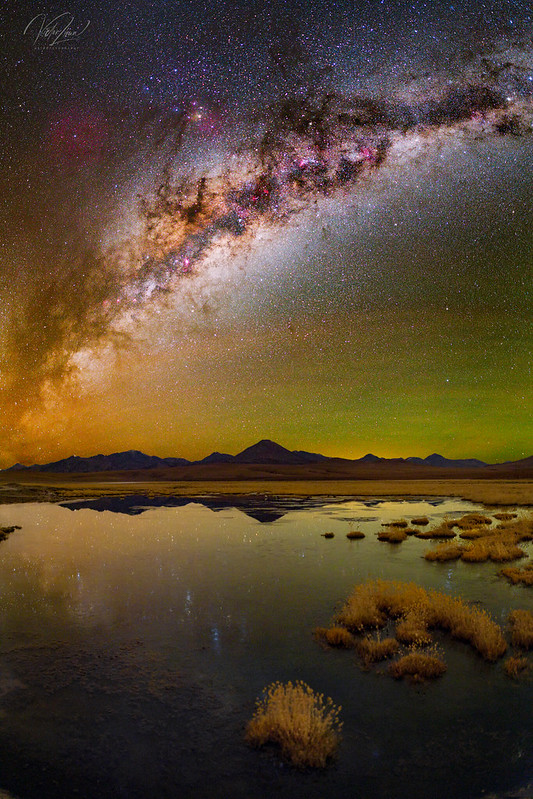 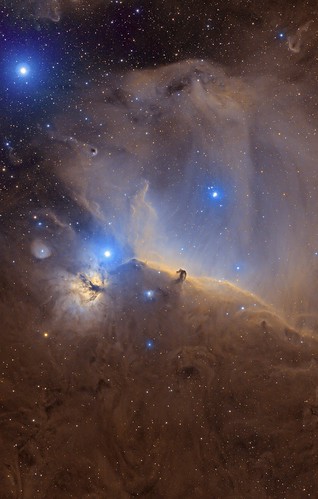 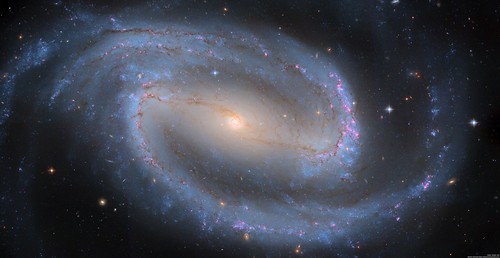 The Hubble telescope captured a display of starlight, glowing gas, and silhouetted dark clouds of interstellar dust in this 4-foot-by-8-foot image of the barred spiral galaxy NGC 1300. NGC 1300 is considered to be prototypical of barred spiral galaxies. Barred spirals differ from normal spiral galaxies in that the arms of the galaxy do not spiral all the way into the center, but are connected to the two ends of a straight bar of stars containing the nucleus at its center.

At Hubble’s resolution, a myriad of fine details, some of which have never before been seen, is seen throughout the galaxy’s arms, disk, bulge, and nucleus. Blue and red supergiant stars, star clusters, and star-forming regions are well resolved across the spiral arms, and dust lanes trace out fine structures in the disk and bar. Numerous more distant galaxies are visible in the background, and are seen even through the densest regions of NGC 1300.

In the core of the larger spiral structure of NGC 1300, the nucleus shows its own extraordinary and distinct “grand-design” spiral structure that is about 3,300 light-years (1 kiloparsec) long. Only galaxies with large-scale bars appear to have these grand-design inner disks – a spiral within a spiral. Models suggest that the gas in a bar can be funneled inwards, and then spiral into the center through the grand-design disk, where it can potentially fuel a central black hole. NGC 1300 is not known to have an active nucleus, however, indicating either that there is no black hole, or that it is not accreting matter.

NGC 3199 Emission and Reflection Nebula in Carina (The Keel)

Below an image of this bright emission and reflection nebula located 12,000 light years away in the southern constellation of Carina (the Keel). The nebula has an arc shaped form and covers a distance of 75 light years. Near the center of the ring is located a "short - lived" Wolf Rayet star HD 89358 or WR18. These type of stars are hot, luminous and are loosing mass in the form of stellar wind at a high rate. Apparently the bow shaped arc was formed out of the stellar wind ejected from WR18. These winds can create strong shockwaves when they collide with the comparatively cool interstellar medium, causing them to heat up anything in their vicinity.

Have a great week
Sergio
You do not have the required permissions to view the files attached to this post.
Top

After numerous attempts, a frame came out with the faithful squire next to it.

Link to high resolution image: https://www.rolfolsenastrophotography.c ... -BgkdFm4/A
This image shows the famous Pillars of Creation region of the bright Eagle Nebula (Messier 16) in Serpens.
Constructed from monochrome exposures in two very narrow wavelength bands of ionised Hydrogen and Oxygen, the data has been combined into a colour image to reveal this highly detailed and very dramatic scene. The bright colours are due to emission from the ionised gases, energised by light from nearby stars. The stars were removed during image processing to fully reveal the intricate structure of the nebula. Orange-red nebulosity corresponds to H-Alpha emission, and the blue areas are OIII.
The core area of the nebula was made famous in 1995 as the "Pillars of Creation" by images from the Hubble Space Telescope. The pillars are giant columns of gas and dust, approximately 9 light-years long, that are slowly being eroded away by intense radiation pressure from nearby young stars.
The nebula lies 6000 light-years distant in the Sagittarius arm of our Milky Way galaxy.

On 4th July the earth  was at  its Apogee and it was at the Farthest point from the sun 152.1 Mio.Km and the apparent Diameter / Angular size  of the Sun was 31.5'
On 13  July  the Full Buck Moon, the moon was at the nearest  point to the earth and it was a super Moon,  But on 14 July the apparent diameter/ angular size of the Moon was 33.6' it is considered the largest apparent diameter of the Moon.

Also you can find the  raw video of comparison the angular sizes of the Sun and the Moon in this Link:
https://drive.google.com/file/d/1vut5PU ... sp=sharing 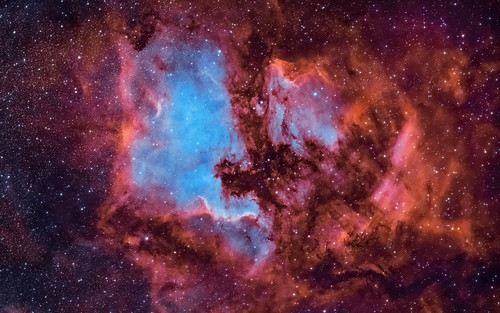 Iapetus pass in front of Saturn, next rendez-vous : 2052!

2 days ago, Iapetus passed in front of Saturn and it's very rare, next rendez-vous is in 2052. It's very small, just 0,23", it's about the size of a coin at 20 km. I made this image from my balcony in Paris. Fortunatly seeing was good this night.

The Cygnus Wall from my backyard 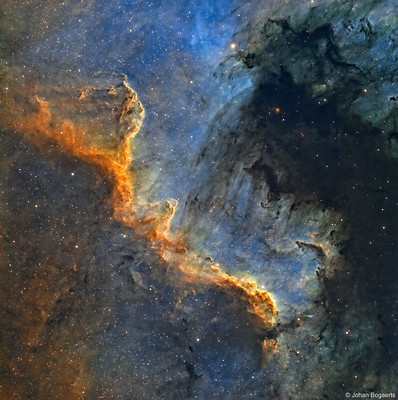 I hope this image is of sufficient quality to be in this forum.
Clear skies,
Johan
Top

This image I left in shades of gray, to incorporate another environment, to show, all the rush of friends getting ready for dusk, the small mist between the hills, the lunar twilight, starting a night of observation.
Trying to report unique moments (you know when you take that old photo of your grandfather, crumpled in black and white, and you keep remembering what that time was like?). In this photo, I was passing by, and I saw our friends getting ready, that rush, the cold increasing, I thanked God for being there at that moment, so I wanted to report that image, a friend doing FLAT, to improve the quality of his images, another preparing his telescope, for an initiation into astrophotography, and another, with his observational telescope, discovering the universe.
There are things in our life that we can't go back, but we can try to keep memories of unique moments for the rest of our lives.
HAPPY FRIEND'S DAY

Here is my attempt at the Elephant Trunk Nebula, taken 14/15 July 2022; 6 hours total of Ha, Sii, & Oiii mapped to the Hubble pallet and adjusted for gold/turquoise. First time I have use the Celestron .7 focal reducer with the EdgeHD 9.25. 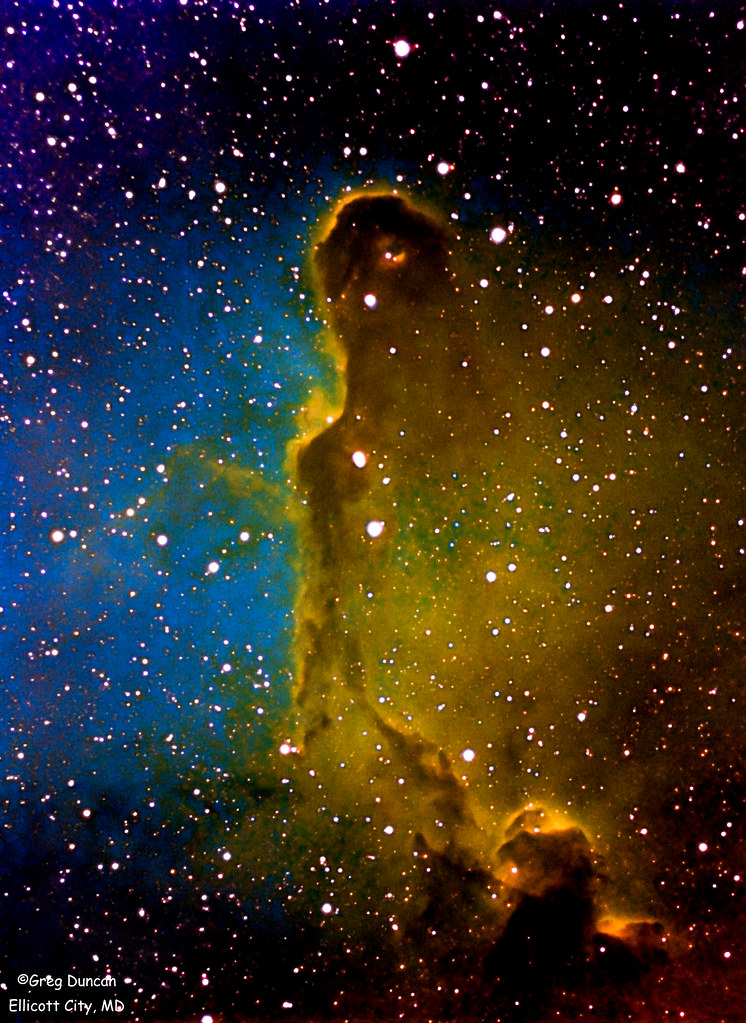 22 degree lunar halo, Moon Dogs and Parhelic Circle
Photo description:
As soon as the moon rose from the east on the evening of July 16, I saw the rare 22 degree lunar halo, Moon Dogs and Parhelic Circle! This beautiful and rare phenomenon lasted for about 3 hours, although the thin clouds interfered but did not affect the observation. The location and shape of the Moon Dogs change with the height of the moon in a time-lapse video linked here: https://youtu.be/wu_MrLqQxQA.
There is actually a faint starry sky above the film, but it looks dim under the influence of urban light pollution and moonlight.
Equipment Details:Canon EOS 6D + 14mm Lens
Post-processing Details:This photo was created by overlaying 51 photos with a total exposure of 13 minutes using Sequator software.
Location : Taipei, Taiwan
Time: July 16, 2022 10:11pm to10:24pm
photographer : Meiying Lee (李美英)
0716_6D50-2a.jpg
Click to play embedded YouTube video.
You do not have the required permissions to view the files attached to this post.
Top 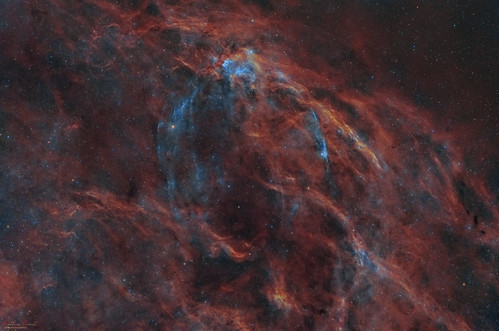 
The ghost of a long-dead star, the W63 supernova remnant shines like a faint cosmic smoke-ring along the plane of the Milky Way galaxy toward the northern constellation Cygnus the swan, about 5000 light-years away. It is a beautiful elliptical SNR not so far from the more famous Cygnus loop SNR. It spans over 95x65' and is quite weak.

I decided for my first light with the little Taka FS60 to go deep into this one and it took quite a while to get enough SNR to bring the fainter areas of Oiii. I chose an HOO-RGB rendition instead of the most popular SHO renditions of this SNR. 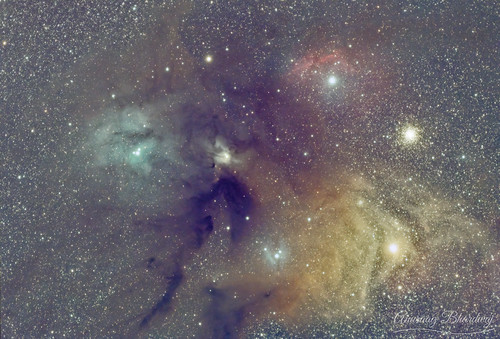 The Head of Scorpius

A beautiful patch of the summer sky in the Northern hemisphere. Over here we can find reflection, emission and dark nebulas. A globular cluster (M4), Antares ("not Mars") and rho Ophiuchi (a double star) just add to the mix.

19 images at ISO 800, 3 min's, were stacked to give a total integration time of close to one hour. Equipment used to take the photos was: a William Optics Star 71 travel scope mated to a Canon EOS Ra, mounted on a Vixen Sphinx SXW german equatorial mount.
Last edited by bystander on Fri Jul 22, 2022 1:03 am, edited 1 time in total.
Reason: all <img> tags require image urls not page urls
Top

Full info and higher resolution @ https://www.kinchastro.com/propeller-nebula-2022.html
You do not have the required permissions to view the files attached to this post.
Top 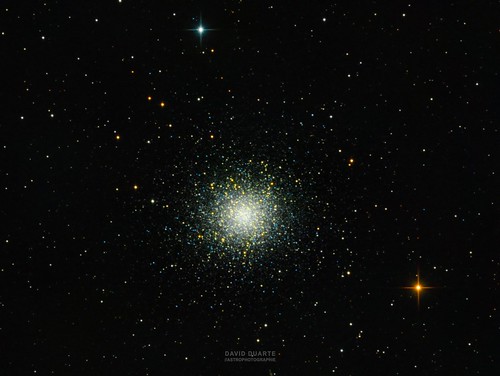 A wide field image showing a crowded field of view of 4º 30' x 3º 22'. The bright star is Lambda Centauri shining at magnitude 3,1 just 410 light years away from Earth. IC2944 is a large HII region (star forming cloud) also known as RCW 42 and Gum 43. The cluster of hot blue stars to the south left are illuminating the gases of IC2944 and causing it to glow in the red and magenta color. The nebula complex covers a distance of 100 light years and is located close to the plane of the Milky Way, therefore a crowded star field is present in all the frame.
Many other objects are visible in the image. See the main ones annotated in the below image.

Cheers to all
Sergio
You do not have the required permissions to view the files attached to this post.
Last edited by Sergio on Sat Jul 23, 2022 7:05 pm, edited 3 times in total.
Top 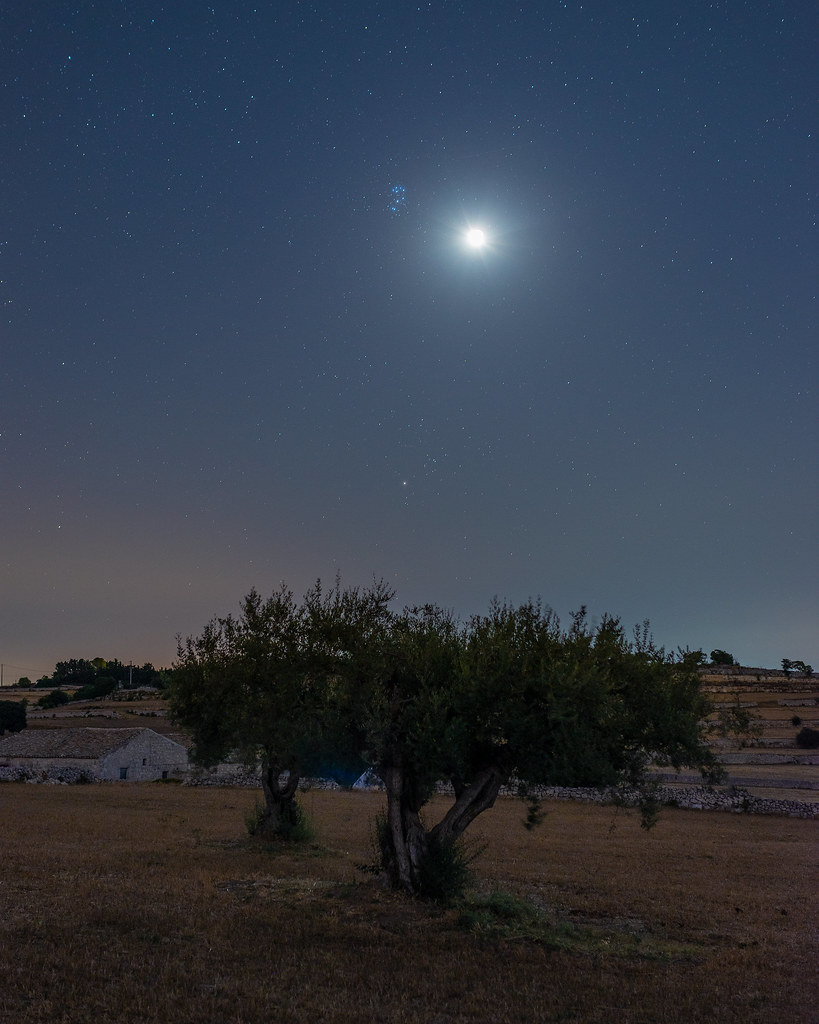 The Moon-Pleiades conjunction in the Sicilian countryside by Salvatore Cerruto, su Flickr
Top

Conjunction between the Moon and the Pleiades
Description: The ashen moon rises, together with the Pleiades, over the Sicilian countryside. I slightly highlighted the Pleiades in post production to highlight their magnitude with respect to the Moon. A suggestive picture of last night surrounded by the chirping of cicadas and the smell of harvested hay. 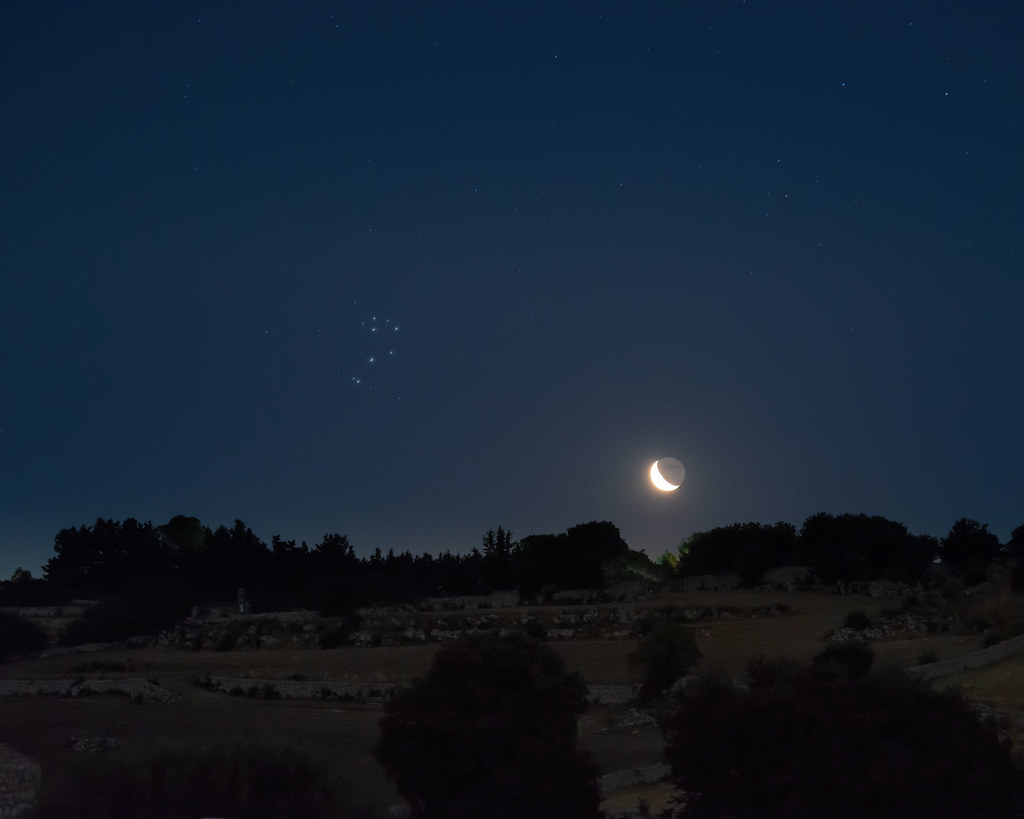 Conjunction between the Moon and the Pleiades by Salvatore Cerruto, su Flickr
Top

salvatorecerruto wrote: ↑Sat Jul 23, 2022 3:57 pm The Moon-Pleiades conjunction in the Sicilian countryside
Description: The beautiful Moon-Pleiades conjunction of this night. The Moon and the seven sisters position themselves delicately above the two olive trees. The Sicilian countryside, the chirping of cicadas, the hay cut recently, are the setting for this spectacle of the sky.

The Moon-Pleiades conjunction in the Sicilian countryside by Salvatore Cerruto, su Flickr

That's a lovely picture of the conjunction between the Moon and the Pleiades! You managed to bring out the blue color of the Pleiades, too! 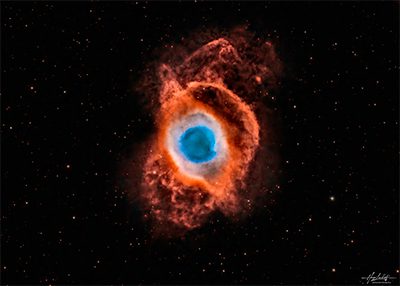 The Helix Nebula (also known as NGC 7293 or Caldwell 63) is a planetary nebula located in the constellation Aquarius.
The distance, measured by the Gaia mission, is 655 light-years.

The photograph was taken by Hugo Landolfi, in a backyard site, from an urban area near the city of Buenos Aires, called San Isidro, with a Bortle 8 sky and narrow band technique.