The Eclipsed Moon, the Pleiades, and the Hyades
Copyright: Alson Wong
My_Picture.jpg
You do not have the required permissions to view the files attached to this post.
Top 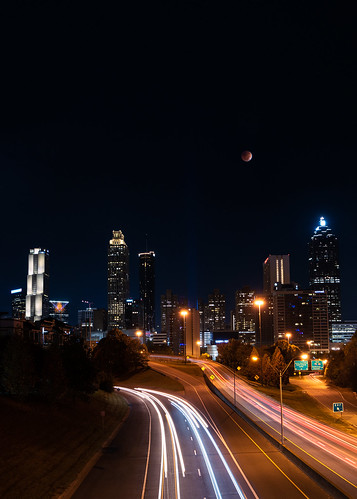 This was shot from the famous Jackson street bridge in Atlanta, Georgia
Top

A Memento Mori in a Molecular Cloud

Taken over nine nights throughout 2022, this rendering of Caldwell 49 reminds me of Robert Herrick’s poem To the Virgins, to Make Much of Time ("Gather ye rosebuds while ye may, Old Time is still a-flying; And this same flower that smiles today Tomorrow will be dying").

At first struck by the simple beauty of a rose (hence, the popular name "Rosette nebula"), we soon realize that Caldwell 49 hides within it a classic Memento Mori - an ominous skull facing us and looking slightly to our left.

When Hans Holbein the Younger painted his famous portrait of The Ambassadors in 1533, he placed an indiscernible shape in the foreground, which proved to be a skull when viewed from a different angle.

When Hamlet looks at poor Yorick's skull, he instructs Horatio to "get you to my lady's chamber, and tell her, let her paint an inch thick, to this favour she must come."

Our collective efforts throughout history to remind ourselves to make much of the limited time we have are admirable, but Caldwell 49 has already been doing this for ~5 million years!

The image comprises over 50 hours of integration (roughly equal parts of H-alpha, S2, and O3, and was taken from my backyard in Santa Monica, CA under Bortle 7 skies. Processing was done entirely in PixInsight, and the gear used was as follows:

Additional detail is available at the image link referenced above.

m27.jpg
This is not your father's dumbbell nebula.

This is 40h 45m of HOO data on M27. The goal was to see how much of the faint outer fringes of the nebula could be brought out. It took a few rounds of processing to finally strike a good balance between core detail and outskirts detail.

It's amazing that when we look through an eyepiece and see that central "dumbbell" or "apple core" that there is so much more to this nebula than our eyes can see.

Data was acquired on a Planewave CDK14 using an FLI PL16803 at Sierra Remote Observatories and acquired in May and June 2022. This final processed version was finally completed in November 2022

For all the technical details you can see the astrobin: https://www.astrobin.com/zqr65a/B/.
You do not have the required permissions to view the files attached to this post.
Top

Uranus and the Eclipsed Moon
Copyright: Alson Wong
My_Picture.jpg
You do not have the required permissions to view the files attached to this post.
Top

With clouds hanging around we weren't sure what to expect but then the clouds parted the moon came up and Western Australia got to enjoy a nice lunar eclipse from the northern suburbs!

The "Blue" Lunar Eclipse
Photo description:
During the total lunar eclipse on November 8, when the moon passed through Earth's umbra just before its third contact, I photographed the dark red moon's edge starting to appear blue. From the third contact to the fourth contact, it can be seen that there is a very obvious blue band between the red dark area and the bright area of the moon! This set of photos shows how the blue band changes throughout the process. According to some sources, blue band appearing on the surface of Moon is due to refraction of sun light by our Ozone Layer.

On the evening of 2022-11-08 I successfully observed and photographed the total Lunar eclipse from the capital of Japan.
This eclipse had a once-in-a-lifetime speciality as during the event the Moon was conjugating with planet Uranus. And by viewing it in East-Asia, the Moon passed in front of the planet, so there was a Uranus-eclipse by the eclipsed Moon.
This photo was taken minutes before the occultation. 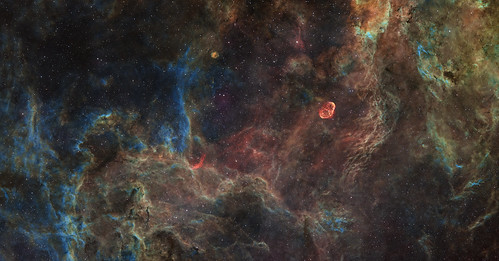 The Blue Belt in Lunar Eclipse
Photo description:
The most amazing thing about the total lunar eclipse on November 8 is the blue band of the red moon!
The blue belt of a total lunar eclipse is caused by the absorption of red wavelengths of light by Earth's ozone layer. I had never photographed the "blue belt" that felt out of reach, but it was very clear and easy to photograph this time. Especially before and after C3, the blue belt can continue to shoot for up to 40 minutes. It may be that the sky is very clean that day.
For this combined photo, 5 photos containing 3 total eclipses were selected for comparison. Due to cloud interference around C2 (6:16 pm), the blue belt is not so obvious. In the middle of eclipse, the moon is in the middle of the earth's shadow, and there is almost no blue. The atmosphere before and after C3 (7:42 pm) is very clean, and the blue belt is very obvious and beautiful!

Second attempt at this, Thanks for the assist GeckZilla and Bystander. My first composition, the November 8th lunar eclipse. Images taken on my Canon 600D prime focus on my Saxon 200ds astrophotography newtonian. Processed on Lightroom and Photoshop.

With clouds hanging around we weren't sure what to expect but then the clouds parted the moon came up and Western Australia got to enjoy a nice lunar eclipse from the northern suburbs!
You do not have the required permissions to view the files attached to this post.
Top

The Iris Nebula (NGC 7023)
I hadn't posted a photo for a while for good reason, I wanted to focus on succeeding with this object, which is very difficult to capture, at least in its very fine clouds of dust. It took me 27 hours of exposures spread over several days from July 24 to August 24, 2022. I only started processing the 327 photos on November 10.
This cloud of dust and gas is located in the constellation of Cepheus, about 1300 light years from Earth. Its shape and color evoke a flower.
It is a reflection nebula whose typical color is blue as the dusty surroundings are ionized by ultraviolet light from hot young stars converting it to red visible light. In the center of the nebula a hot, massive young star is forming.
The blue petals of the Iris extend out about 6 light years.
TECHNICAL
200/1000 Telescope
Equatorial mount AZEQ6GT PRO
Camera imageur ZWO 1600MM PRO
ZWO 120MC guidance camera
60x60 sec RVB
147x600 sec L
22 heures de pose total
Traitement Pixinsight + Photoshop 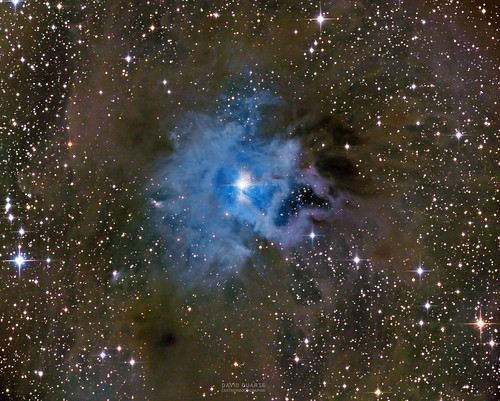 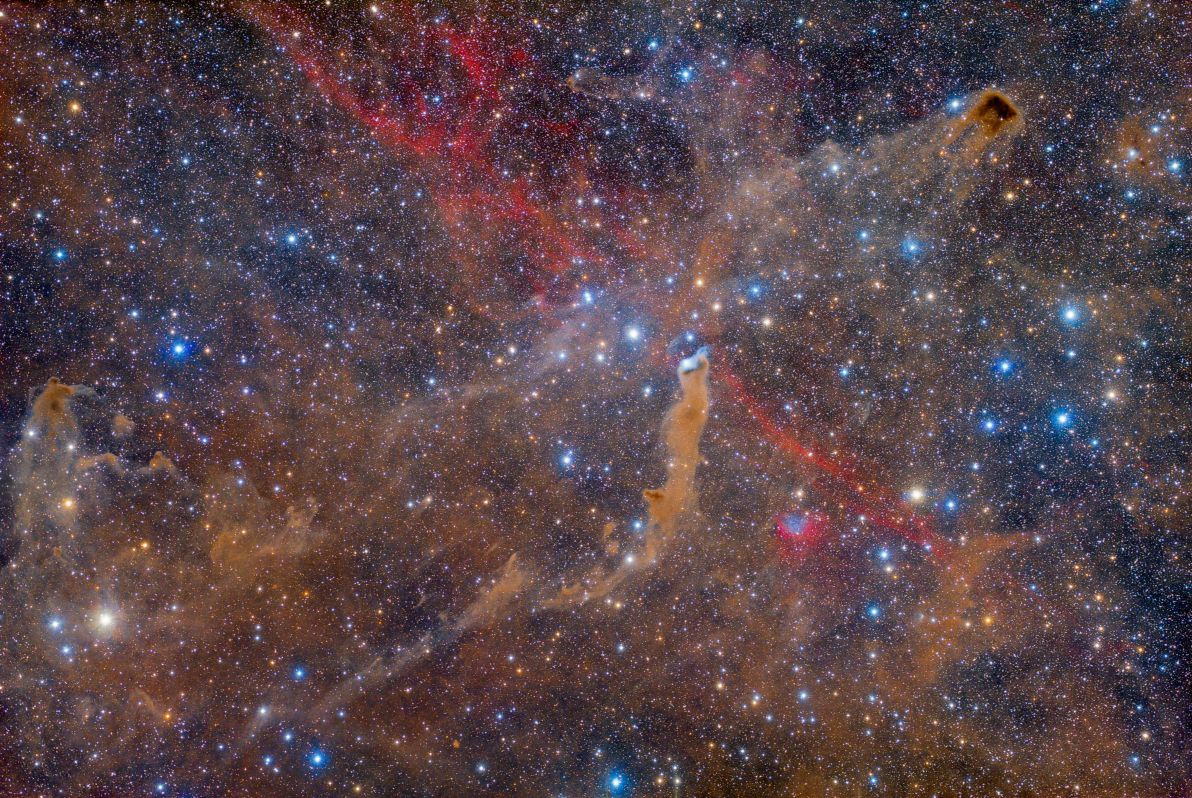 The California Nebula, 110 hrs of integration over the course of 2 months. 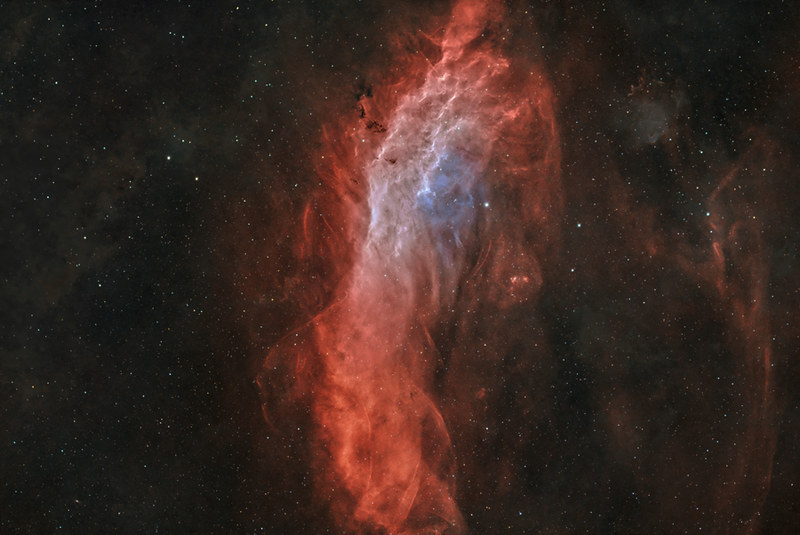 Total Lunar Eclipse 2022 and the One Vanderbilt in New York City
Follow me: https://www.instagram.com/rli.ig/
Equipment: Sony a7C and Tamron 50-400mm 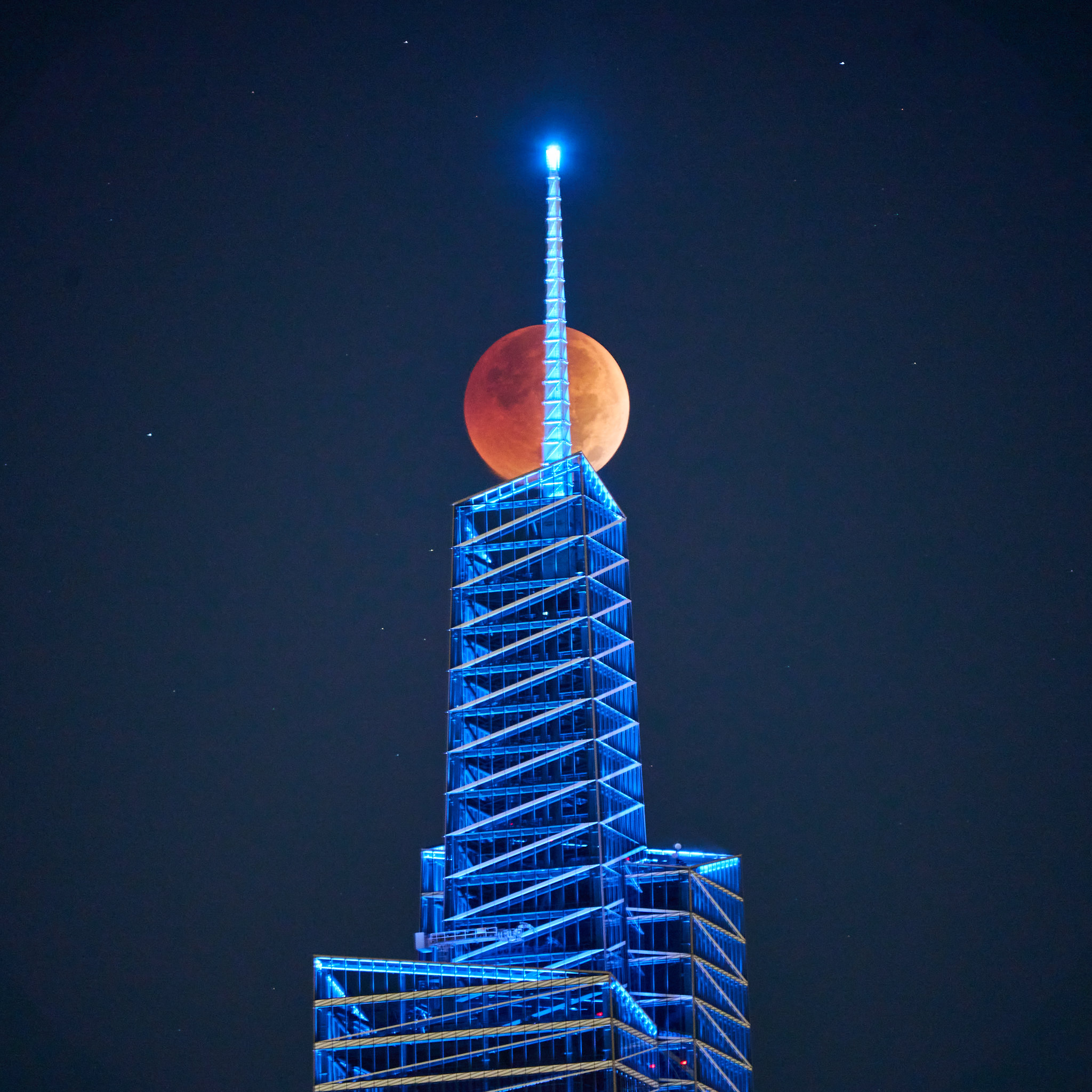 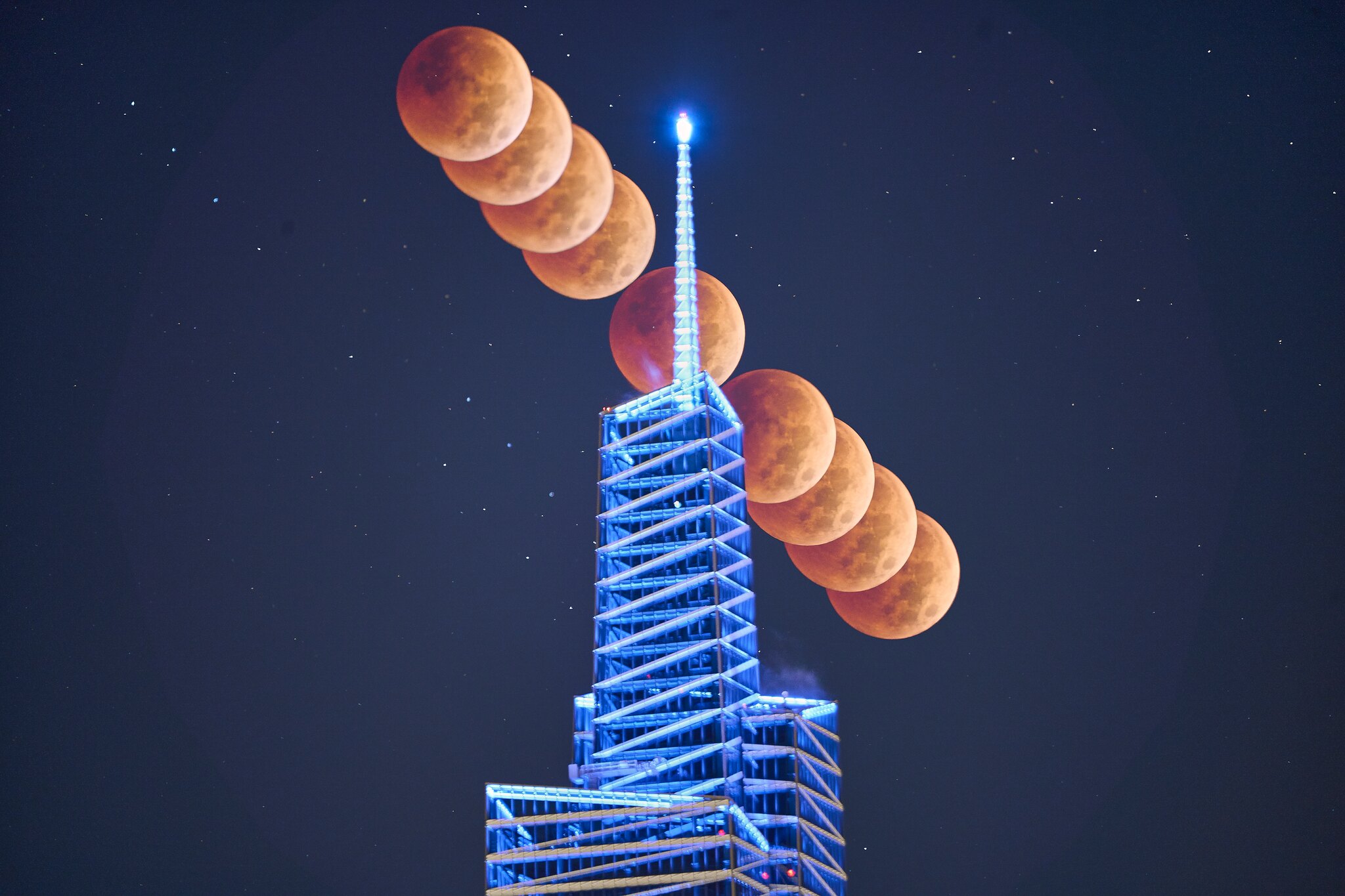 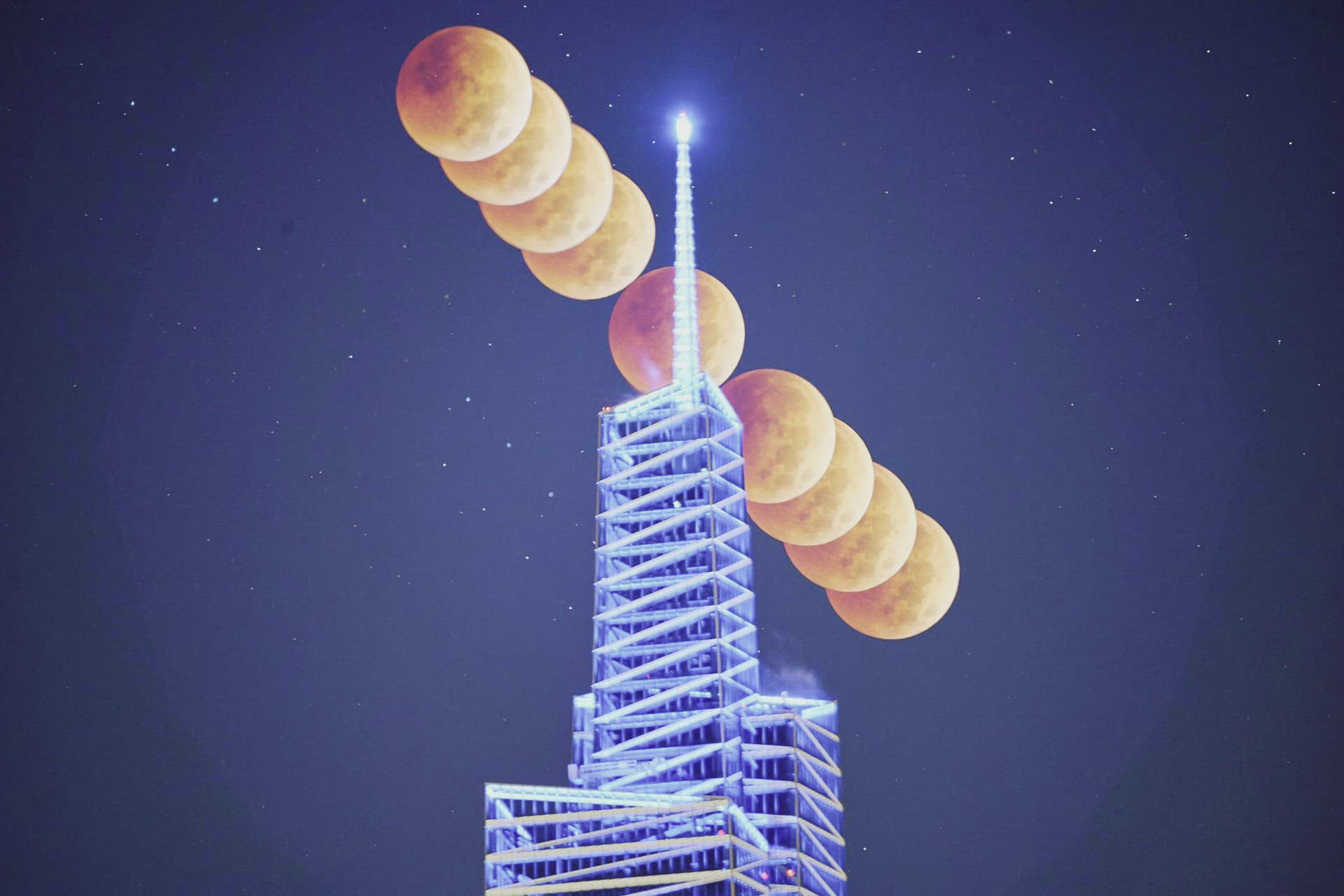 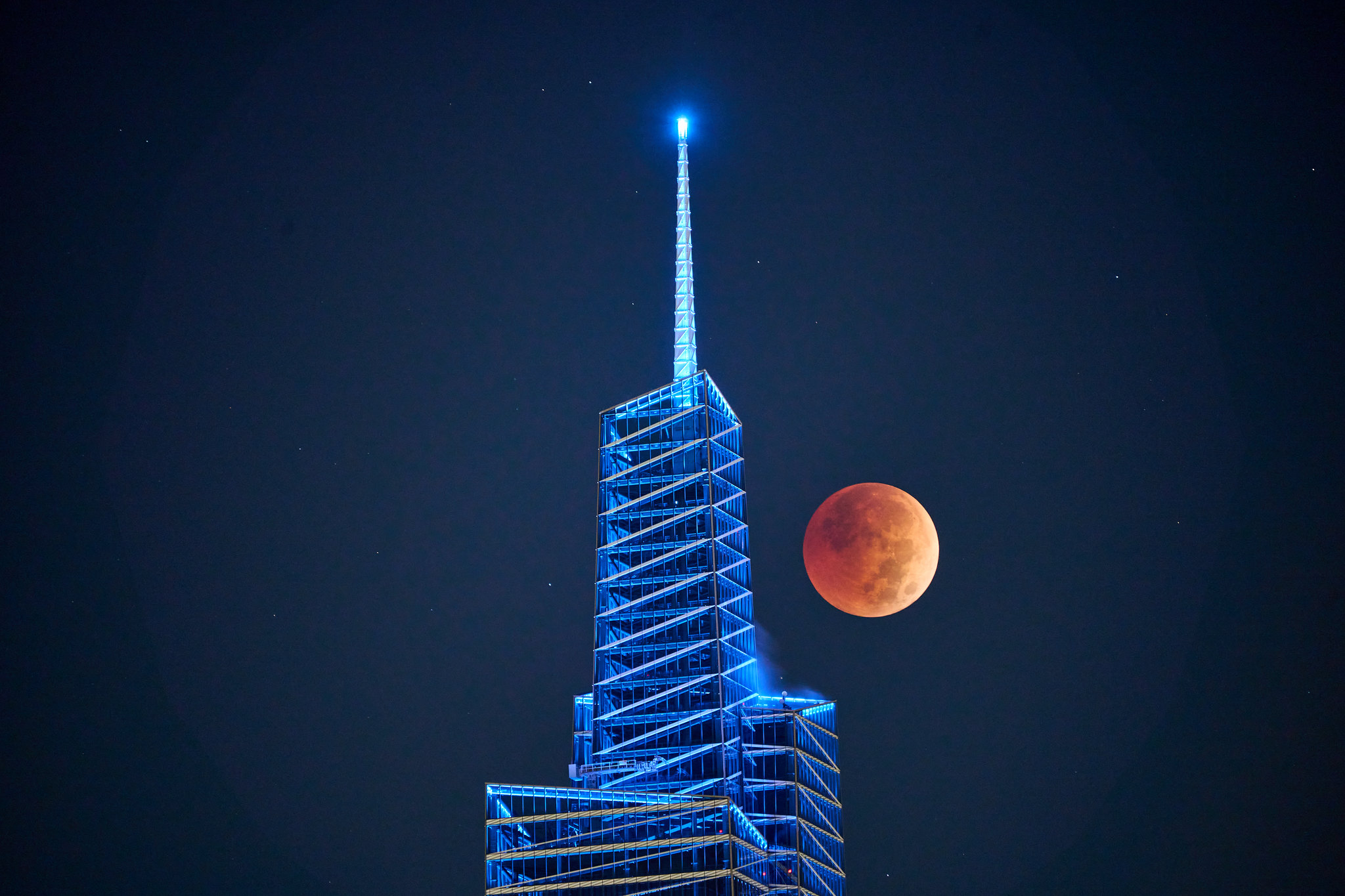 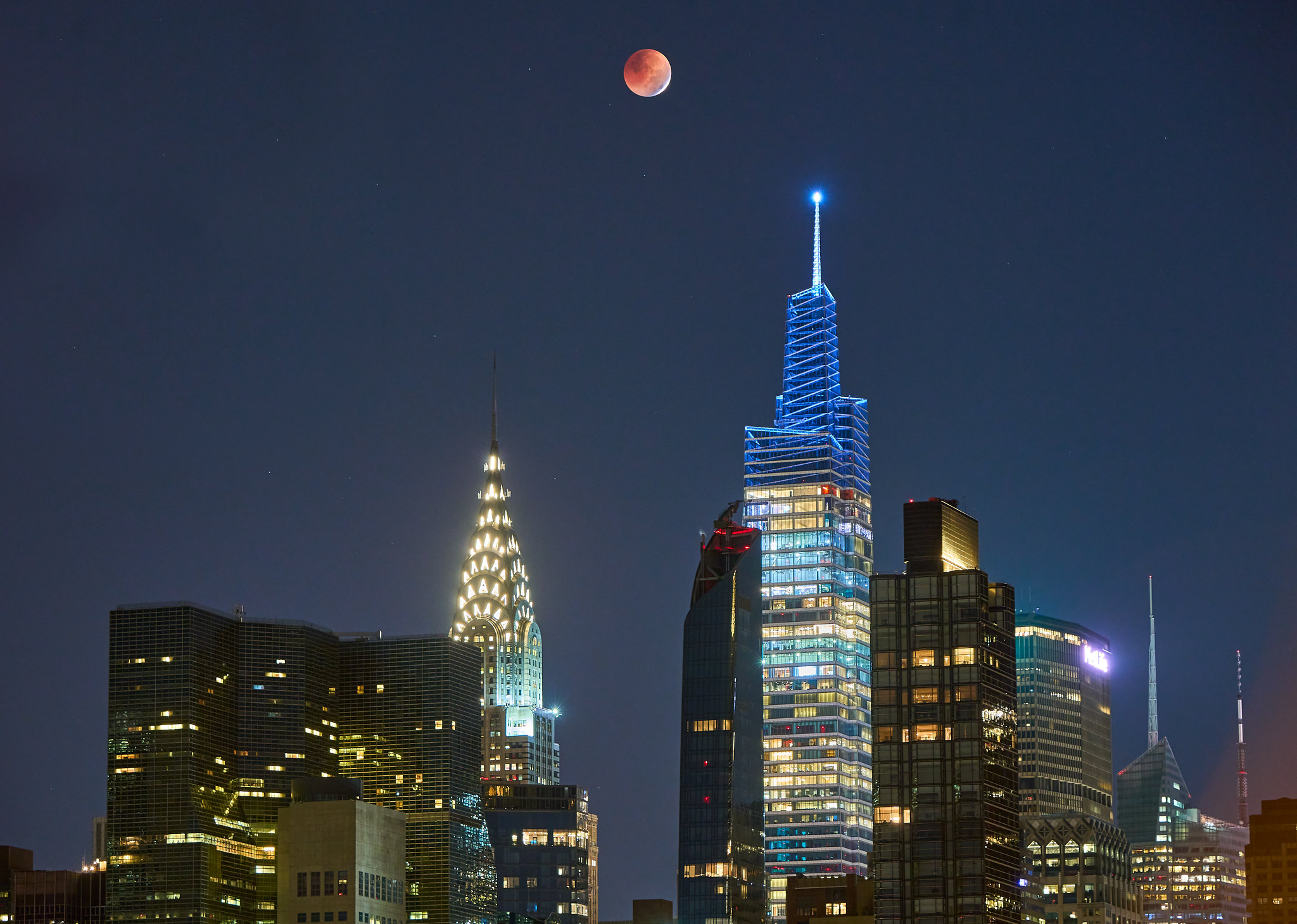 The Shadow of the Earth
Copyright: György Soponyai

There are three types of lunar eclipses: the barely noticeable penumbral eclipse, plus the spectacular partial and total eclipses.
By this photo sequence (taken with the same equipment) I am trying to demonstrate the differences of these three eclipse types. Each time the lunar disk was captured in 15 minutes, thus they draw the form of the shadow of the Earth.

The some part of the penumbral photo sequence is quite blurry due to the thin cloud layer.
In the partial photo sequence the change of Lunar disk color and brightness is caused by the different amount of Saharan dust in the atmosphere.
As the next total eclipse that is entirely observable from Hungary will be in December 2029, some days ago I traveled to Tokyo in order to capture the total sequence visible here.

Optical Reflections of the Eclipse above the great pyramid


During the solar eclipse , another Eclipsed Sun ghost flare was formed on the edge of the great pyramid due to the reflections of the sun's rays on optical elements of the Camera's lens . 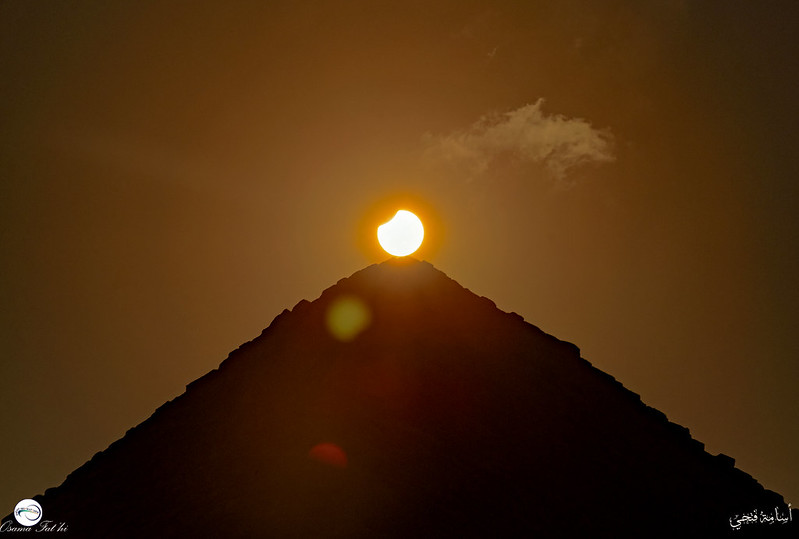 Inverted Sun- Ghost Flare-Eclipse-25-Oct with the great pyramid by osama Fathi, on Flickr

the sun ghost flare looks inverted in the photo 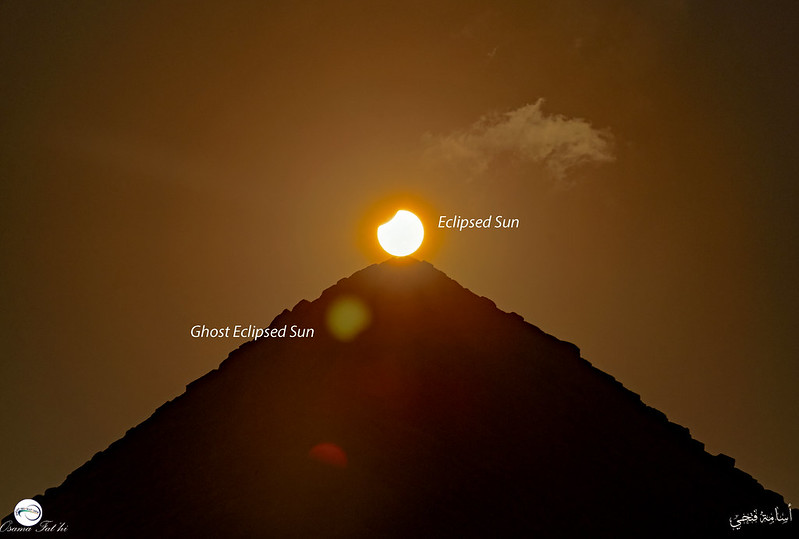