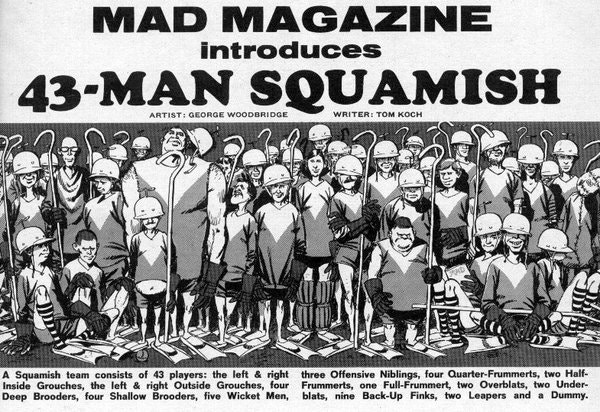 Click to play embedded YouTube video.
<<In 1965, Mad #95 included "43-Man Squamish," written by Koch and illustrated by George Woodbridge. The absurdist article detailed the convoluted rules of an imaginary sport, and made enough of an impression to be mentioned in both men's New York Times obituaries, including the first sentence of Koch's.

In the article, new terminology is introduced with no explanation; much of the humor derives from the reader's half-successful attempts at gleaning a meaning from context. Exactly what everyone on the team is supposed to do, exactly what penalties apply, and exactly when or why the "yellow caution flag" is to be flown remains far from clear, even after repeated readings.The rules

Each team consists of one left and one right Inside Grouch, one left and one right Outside Grouch, four Deep Brooders, four Shallow Brooders, five Wicket Men, three Offensive Niblings, four Quarter-Frummerts, two Half-Frummerts, one Full-Frummert, two Overblats, two Underblats, nine Back-Up Finks, two Leapers and a Dummy — for a total of 43. The game officials are a Probate Judge (dressed as a British judge, with wig), a Field Representative (in a Scottish kilt), a Head Cockswain (in long overcoat), and a Baggage Smasher (dressed as a male beachgoer in pre-World War I years). None of the officials has any authority after play has begun.

Squamish is played on a pentagonal field, or Flutney, and the game is divided into a period of 15 minutes, known as an Ogre. Most squamish games consist of seven Ogres, unless of course, it rains. In that case, they are to play eight Ogres. Competitors wear gloves, a helmet, and flippers. They pursue the Pritz (or ball), which is 3-3/4 inches in diameter, constructed from untreated ibex hide, and is stuffed with blue jay feathers. Each player is equipped with a Frullip, a long hooked stick very similar in appearance to a shepherd's crook that is used to impede opponents.

Before any game, the Probate Judge must first flip a coin, usually a new Spanish peseta, while the Visiting Captain guesses the toss. If he guesses correctly, the game is cancelled immediately. If not, the Home Team Captain must then decide if he wishes to play offense or defense first. Play begins after a frullip is touched to the flutney and the recitation "Mi tío es enfermo, pero la carretera es verde!", a wise old Chilean saying that means, "My uncle is sick but the highway is green!" Penalties are applied for infractions such as walling the Pritz, icing on fifth snivel, running with the mob, rushing the season, inability to face facts, or sending the Dummy home early.

The offensive team has five Snivels to advance to the enemy goal. Carrying the Pritz across the goal line is a Woomik and scores 17 points; hitting it across with the frullip counts as a Durmish and only scores 11 points. Except in the 7th Ogre (and the 8th, if it rains), only the offensive Niblings and Overblats are allowed to score. In such cases, the four Quarter-Frummerts are allowed to kick or throw the Pritz, and the nine Finks are allowed to heckle the opposition by doing imitations of Barry Goldwater.

The teams must play a sudden-death overtime to break a tie, unless both Left Overblats are out of the game on personal fouls. If this is the case, the tie is settled by the teams lining up on opposite sides of the flutney (inherently difficult on a pentagonal shape) and shouting dirty Limericks at each other until one side breaks up laughing.

When an insufficient number of players precludes a regulation 43-Man Squamish match, a simplified version may be played: 2-Man Squamish. The rules are identical, except in 2-Man Squamish, the object is to lose.

Although writer Koch intended the game to be completely unplayable, some colleges even attempted to form teams and play the game. The letters column to Mad #97 included several "team photos" and accounts from new acolytes of the sport. A student from Rensselaer Polytechnic Institute issued a public challenge to Harvard, while athletes from the University of Alberta exulted that "we happen to be the only undefeated Squamish team in Western Canada, mainly because we are the only team in Western Canada, and we haven't played a game. We can't understand why we have no opposition." A letter from the Athletic Committee of Marquette University reported that three of its Squamish players had been suspended for "sportsmanlike conduct.">>