My science teacher told me about a new state of matter found in space, but he doesn't remember the name of it. Does anyone? Please tell me.
Top

Joseph Buell wrote: ↑
Wed Jan 13, 2021 3:11 pm
My science teacher told me about a new state of matter found in space, but he doesn't remember the name of it. Does anyone? Please tell me.

Could this be what you are asking about?

While glass is a truly ubiquitous material that we use on a daily basis, it also represents a major scientific conundrum. Contrary to what one might expect, the true nature of glass remains something of a mystery, with scientific inquiry into its chemical and physical properties still ongoing. In chemistry and physics, the term glass itself is a mutable concept: It includes the substance we know as window glass, but it may also refer to a range of other materials with properties that can be explained by reference to glass-like behavior, including, for instance, metals, plastics, proteins, and even biological cells.

While it may give the impression, glass is anything but conventionally solid. Typically, when a material transitions from a liquid to a solid state the molecules line up to form a crystal pattern. In glass, this does not happen. Instead, the molecules are effectively frozen in place before crystallization happens. This strange and disordered state is characteristic of glasses across different systems and scientists are still trying to understand how exactly this metastable state forms.

Research led by professors Andreas Zumbusch (Department of Chemistry) and Matthias Fuchs (Department of Physics), both based at the University of Konstanz, has just added another layer of complexity to the glass conundrum. Using a model system involving suspensions of tailor-made ellipsoidal colloids, the researchers uncovered a new state of matter, liquid glass, where individual particles are able to move yet unable to rotate – complex behavior that has not previously been observed in bulk glasses. The results are published in the Proceedings of the National Academy of Sciences of the United States of America (PNAS)...

or this? (Bose-Einstein condensate)

Exotic fifth state of matter made on the International Space Station

https://www.google.com/search?q=new+sta ... d+in+space
Know the quiet place within your heart and touch the rainbow of possibility; be
alive to the gentle breeze of communication, and please stop being such a jerk. — Garrison Keillor
Top

Exotic fifth state of matter made on the International Space Station

That one's not new. Ann's news story is the only recent one I'm aware of about a new state of matter, but it doesn't involve anything in space.

There are currently a LOT of different states of matter that have been identified. We're long past solid, liquid, gas, plasma.
Chris

A Youtuber, Anton Petrov, posts a new video on science and space every day. I don't fully trust everything he says, but I watch his videos regularly, anyway.

He recently posted a video about new and previously undiscovered different states of water. According to this video, water (H2O) is found in other states in space than on the Earth.

Yes, bystander. Thank you. My teacher told me yesterday, that was what he meant.
Nothing in life is to be feared, it is only to be understood.
Top 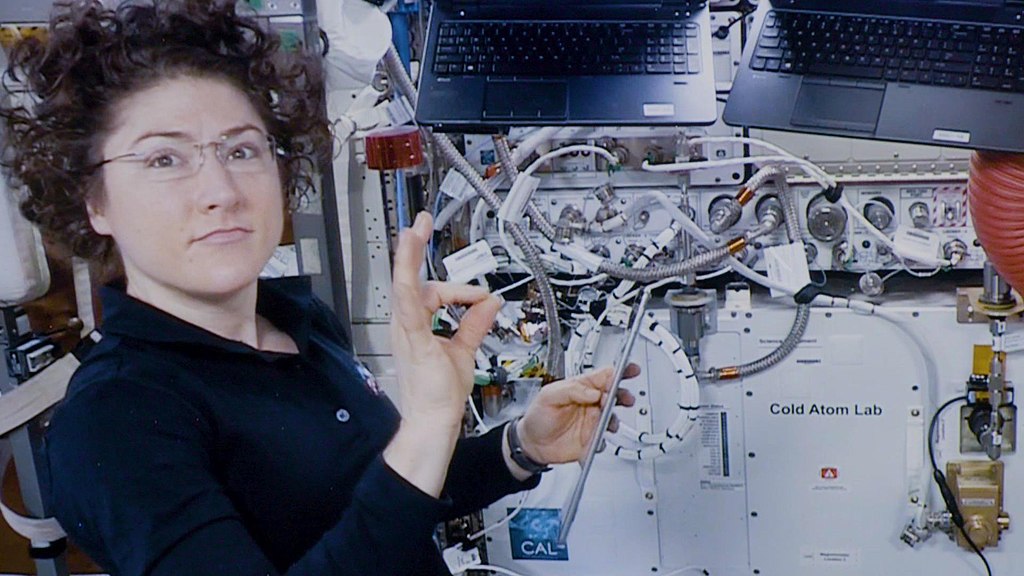 <<The Cold Atom Laboratory (CAL) is an experimental instrument on board the ISS, which launched in 2018. The instrument creates extremely cold conditions in the microgravity environment of the ISS, leading to the formation of Bose Einstein Condensates that are a magnitude colder than those that are created in laboratories on Earth. Compared to more commonly encountered states of matter, Bose–Einstein condensates are extremely fragile. The slightest interaction with the external environment can be enough to warm them past the condensation threshold, eliminating their interesting properties and forming a normal gas. In a space-based laboratory, up to 10 seconds interaction times and as low as 1 picokelvin temperatures are achievable, and it could lead to exploration of unknown quantum mechanical phenomena and test some of the most fundamental laws of physics. These experiments are best done in a freely falling environment, because it is more conducive to uninhibited formation of Bose Einstein Condensates. Ground based experiments suffer from the effect of the Condensate interacting asymmetrically with the apparatus, interfering with the time evolution of the Condensate. In orbit, experiments can last much longer because freefall is sustained indefinitely. NASA's JPL scientists state that the CAL investigation could advance knowledge in the development of extremely sensitive quantum detectors, which could be used for monitoring the gravity of Earth and other planetary bodies, or for building advanced navigation devices.>>