Orion at the beach.
Saturday night was a beautiful clear, calm night with the tide out. A campfire behind the headland added colourful smoke and made the scene more atmospheric.
This is a stacked and tracked shot. 20x 2min for the sky, blended with a 3min foreground shot of the Oregon Coast at Hug Point.
Canon Ra, F/2.8, Iso1600
www.astrophotography.ie
Thanks Tom.
Orion Hug Point Star Asterix.jpg
You do not have the required permissions to view the files attached to this post.
Top 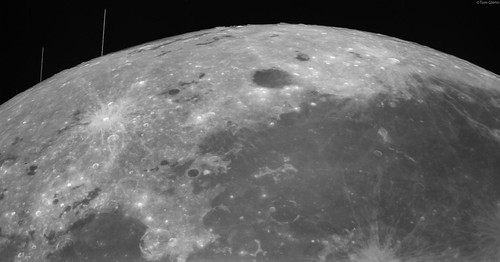 Stars occulted by Earthshine Moon by Tom Glenn, on Flickr

At first glance this may look like an ordinary image of the Moon, but it is somewhat unusual. The two prominent white streaks at left are star trails, created as the Moon occulted two stars in this stack of 102x2s exposures aligned on the Moon. Although this image shows the western limb of the Moon in clear detail, the lunar surface here is not illuminated by the Sun, but rather by Earthshine (the sunlit surface at the time was a waxing crescent). A video showing a cropped region of the original 102 frames is posted below, showing the stars being occulted:

The mountains on the lunar limb near the top center and to the left of the image (near the star trails) are part of the Orientale Basin, a region that is occasionally visible from Earth during favorable libration, and which I have discussed at length in previously published images (examples here and here with several images featured in a recent article in Sky & Telescope). 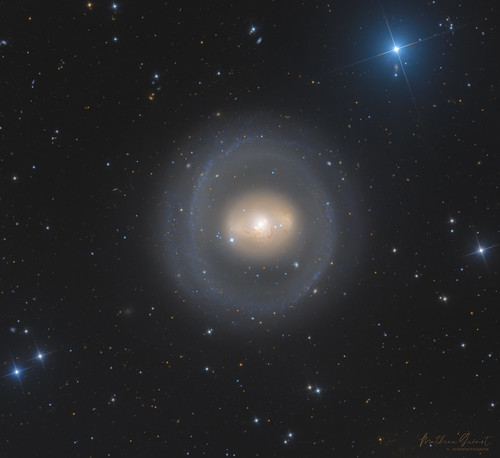 Thanks to Martin Pugh's data set combinated with a Telescope Live dataset, i was able to process this fantastic galaxy in a close view and reveal the very nice structures and colors in its core as well as in its faint outer ring and its generous background .
This is a very interesting and quite unusual object on which i had a great pleasure to work!

The barred lenticular galaxy NGC 1291 (also known as NGC 1269), located about 33 million light-years away in the constellation Eridan, is remarkable for its inner bar of stars, and for its faint outer ring structure where fledgling stars ignite. Our own Milky Way galaxy has a bar, but not as large as NGC 1291, which makes it particularly interesting (also because of its proximity to us) for understanding how bars of stars like this shape the fate of galaxies.
Is is the largest example of galaxy at the transition stage between late lenticulars and early spirals : from the large and semi-detached outer ring emerge two faint spiral arms which can be seen on this high resolution image.

The bar formed early in the history of this very old galaxy about 12 billion years ago. It stirred up matter, forcing stars and gas out of their original circular orbits into large, non-circular radial orbits, creating resonant zones where gas is compressed and triggers the formation of new stars.
The stars in the central bulge region, giving it its reddish hue, are the oldest and most of the gas (or star-forming fuel) was used there by these generations of stars: when galaxies are young and gas-rich, the star bars push the gas toward the center, fueling star formation.
Over time, as the fuel runs out, the central regions become quiet and star-forming activity shifts to the periphery of the galaxy. There, density waves and resonances induced by the central bar help convert gas into stars. The outer ring is one such resonance zone, where gas has been trapped and ignited in a star-forming frenzy, giving it the bluish hue typical of young star clusters. 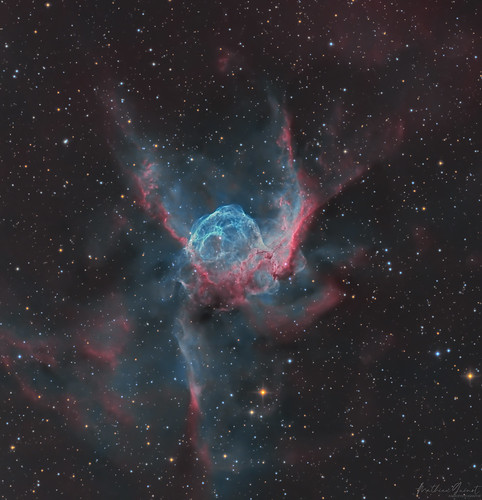 Here is an HOO rendition of NGC2359, also known as Thor's helmet, which is an emission nebula located in the constellation Canis Major, at a distance of about 15,000 light-years. It is one of the most famous Wolf-Rayet bubble.
Unlike typical emission nebulae, in which young hot O-type stars ionize the gas cloud from which they are formed, much of the gas surrounding the Wolf-Rayet star HD 56925 comes from the star itself. The mechanism for this is similar to the process in which planetary nebulae form. Wolf-Rayet stars represent the last stage in the evolution of massive and super-massive stars (> 20 solar masses), before they explode into a supernova. These stars lose mass at a prodigious rate, losing most of their hydrogen and exposing the very hot stellar core. The gas is ejected at high speed and plows into the surrounding interstellar material, forming the complex knots and shock arcs visible in the photo.

I have embedded the RC1000 data in the center of the nebula to slightly increase the details.
Top


It is the second brightest globular cluster in the sky (after Omega Centauri), it is about 16,700 light-years away from Earth.

The Small Magellanic Cloud (SMC) is an irregular dwarf galaxy, which is located ~200000 light years away. The SMC is thought to have once been a barred spiral galaxy but it has been disrupted and shaped by interactions with it’s neighbours, the Large Magellanic Cloud (LMC) and the Milky Way galaxy. These interactions result in intense ram pressures and gravitational tidal shocks which have stripped and re-distributed material from the SMC forming an extended envelope of ionised gas. This ionised gas is located in an extended halo but also in a number of large, faint ionised structures. One structure is the SMC tail and the Magellanic bridge, which connects the SMC to the LMC, and this was formed from an interaction which occurred ~200 million years ago. The other main structure is the Magellanic stream, a giant cloud of gas which extends over 100 degrees from the SMC and LMC towards the Milky Way. In this image, you can see the SMC tail/bridge extending to the top right, and faint filaments towards the bottom of the frame which appear to extend towards the Magellanic stream.

SHO_final_1800.jpg
You do not have the required permissions to view the files attached to this post.
Top 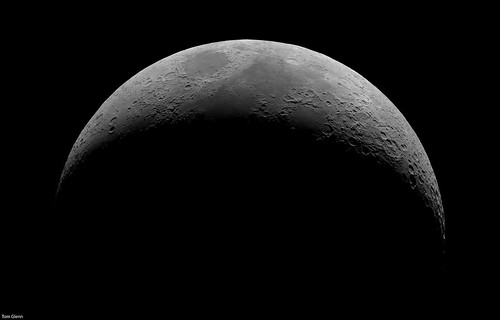 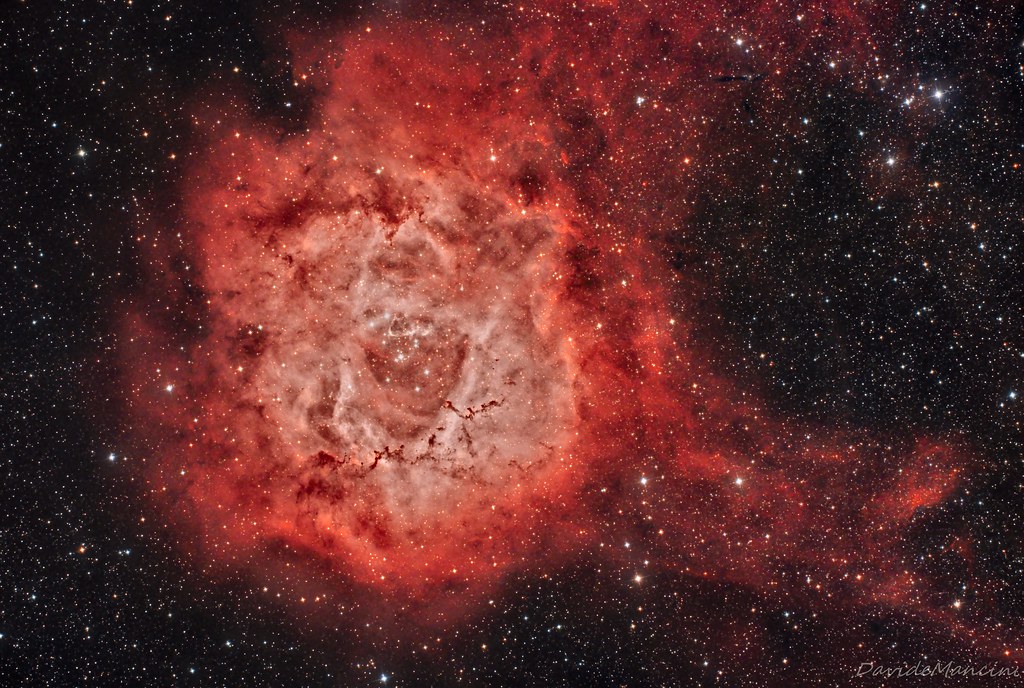 DSC_4158_pipp____mean_100r__2000regREGISTAX_GIMP.jpg
Space Baseball
This image shows the transit of a bird in front of the Sun - which ends up resembling a baseball. Footage was captured on 17-Jan-2022 from Bengaluru, India. The Sun's image has been stacked from the same footage and individual frames of the bird's transit have been blended into it.

Name - Vineeth Kaimal
Instagram - https://www.instagram.com/tuastronomer/
Website - https://theurbanastronomer.com/
Date - 17/January/2022
Location - Bengaluru, India
You do not have the required permissions to view the files attached to this post.
Top

Apparent size of Planets relative to each other.
I have taken planet for many year from Thailand with the same telescope, but never compare their size.
This is the first time for me to compare apparent size of planet by using my data.

Taken by Thanakrit Santikunaporn/NARIT
photo without credit: https://nc.narit.or.th/nextcloud/index. ... T4N9JJ8s9R
You do not have the required permissions to view the files attached to this post.
Top 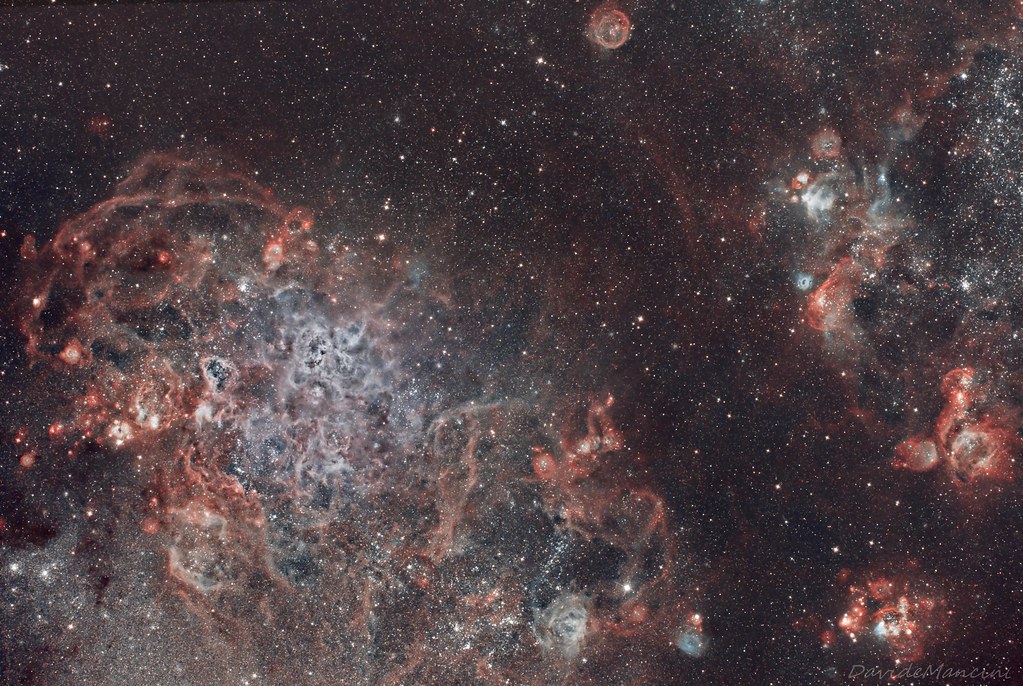 this is my rendition of the beautiful Rosette nebula imaged early in January. honestly this might be one of my favorite objects in the night sky. it was imaged in Kuwait between a bortle 5 and 6 zone at the camel hangers. I added more Oiii to this target and I really think it's an amazing version of this hard target.

Fist time poster, so lets see if I can get this right.

That's a very nice picture of the Andromeda galaxy. I like the subtle colors. 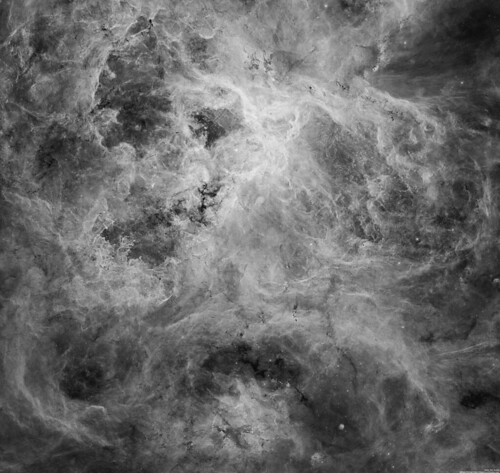 Hubble’s stunning 325 megapixel mosaic of the Tarantula Nebula by William Ostling, on Flickr

This image is downsampled 3x. I strongly recommend looking at the full size gigapan here: http://www.gigapan.com/gigapans/228522

I don’t really think that words can effectively describe this image. There’s so much going on here that it almost seems wrong to try to simplify what’s happening, but here goes: At the top center lies a massive star cluster that’s putting out enormous amounts of energy. All the hydrogen gas around that star cluster is being ionized, much like a neon sign. The ionization and energy outflows create the beautiful knots and filaments that you can see. By looking at this region through a filter that isolates the Balmer alpha drop, we can see the nebula in all its glory.

Attached image includes most of the Vela supernova remnant (SNR). When looking into the often photographed Pencil Nebula on the left of the image it is easy to see the huge scale of the Vela SNR. Vela SNR exploded maybe 10000 years ago.

Attached is also an annotated image. Non-catalog names are from a book by Stephen Chadwick and Ian Cooper: Imaging the Southern Sky.

This image is a three panel mosaic processed in HOO narrowband palette. Data is from Telescope Live telescopes in Heaven’s Mirror Observatory, Australia.

Messier 82 (The Cigar galaxy) is a starburst galaxy approximately 12 million light-years away in the constellation Ursa Major. This galaxy goes through gravitational interactions with its neighbor M81 thereby causing it to have high rate of star formation.

Winter Hexagon, Great asterisk in northen winter skies. From Torroja del Priorat I was taken 125 photos of 20" with my Sony A6300. All staked with DSS and processed with Phothoshop. I want to representate this great hexagon with 7 starts. 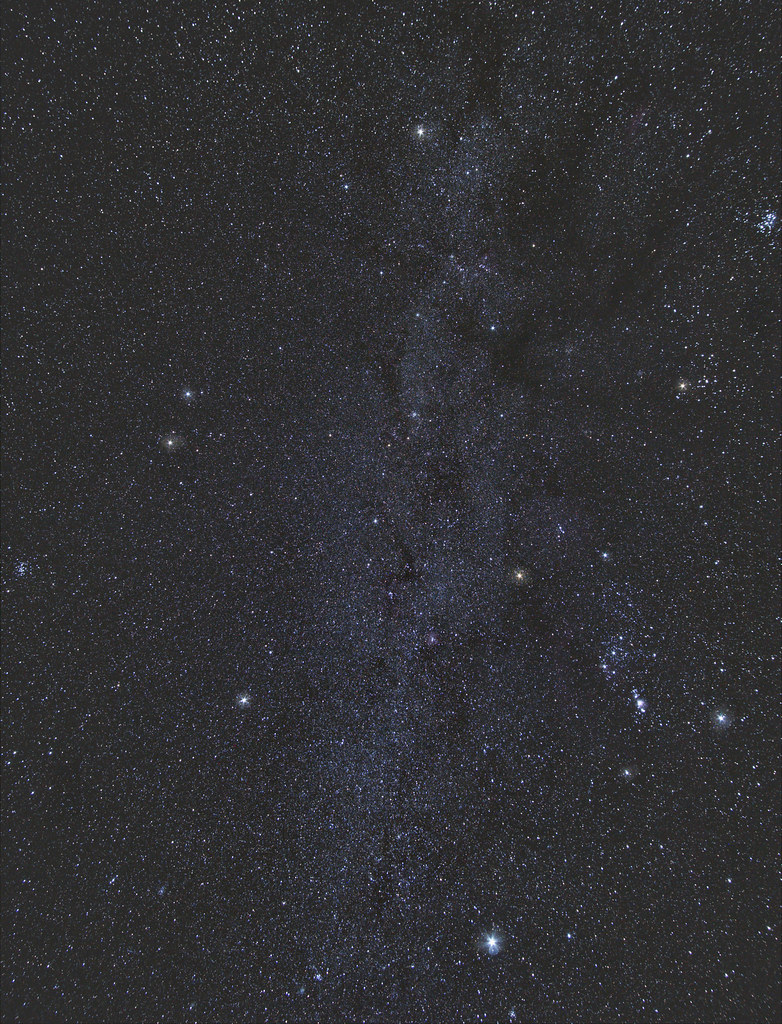 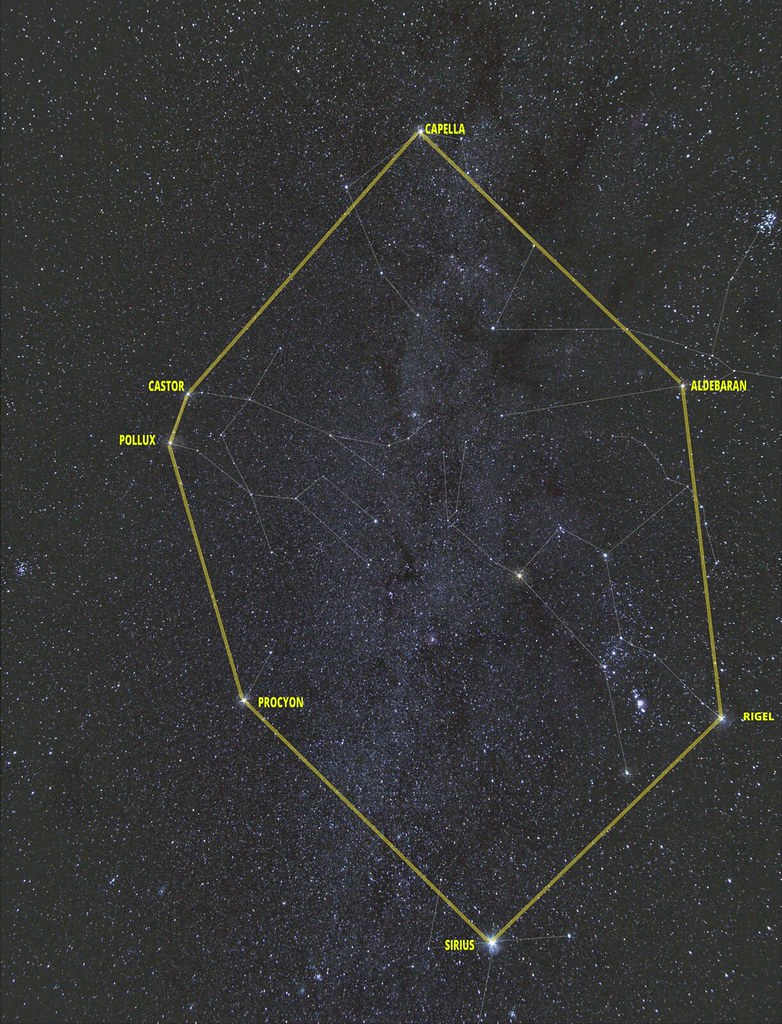 Open clusters (OCs) are groups of stars loosely gravitationally bound to each other that form from the same giant molecular cloud. So far, more than 1,000 of them have been discovered in the Milky Way, and scientists are still looking for more, hoping to find a variety of these stellar groupings. Studying galactic open clusters in detail could be crucial for improving the understanding of the formation and evolution of the galaxy.

NGC 2158 (other designations: OCL 468, Lund 206 and Melotte 40) is an old, low-metallicity OC located at the Milky Way's periphery. The cluster is about 14,700 light years away, and its age is estimated to be some 2 billion years.
You do not have the required permissions to view the files attached to this post.
Lluís Romero Ventura
http://astrophotographysirius.com/
Top

A project that took weeks of planning, shooting, and processing to produce a uniquely detailed 244MP final image of SH2-264, the Angelfish Nebula in Orion. The result of an hour of usable exposure for each of the 16 panels of the mosaic created from 192 total, 26MP shots, taken from my backyard.

220131 Angelfish--Edit.jpg
You do not have the required permissions to view the files attached to this post.
Top

I present to you the great nebula of orion, captured with my takahasi FSQ106 at f3.6
I used the CMOS ZWO ASI 294MC Pro for the acquisition of the photographs. A total of 45 180" shots and 25 10" shots for the core.
Captured in the rural skies of Torroja del Priorat
Processed with Pixinsight and Photoshop 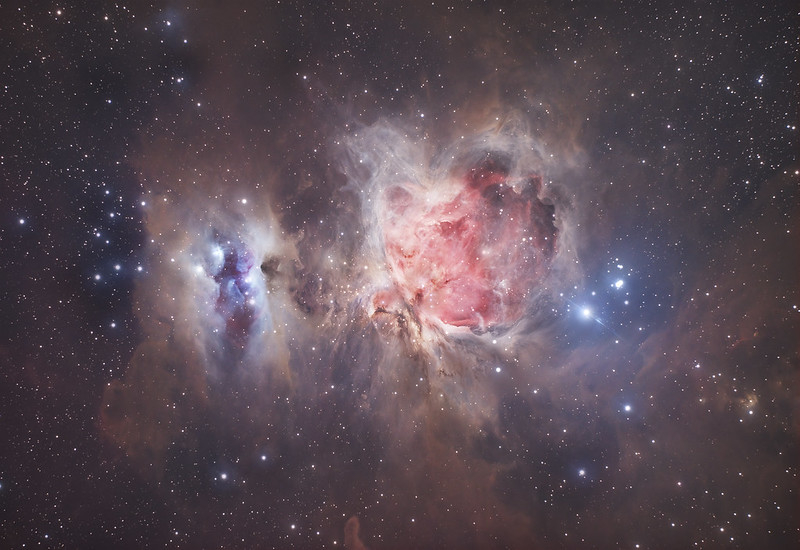