pBM7eje[1].png
https://i.imgur.com/pBM7eje.png
You do not have the required permissions to view the files attached to this post.
Last edited by bystander on Sun Dec 17, 2017 2:26 am, edited 2 times in total.
Reason: Please, no hotlinks to images > 500Kb. Uploaded as attachments.
Top

Rolando Ligustri wrote: in twenty years as a comet photographer, it's the first time I've seen a blue one.
the "puff" that you see in N-O I think it is a remnant of the outburst a few days ago

link http://spaceweathergallery.com/indiv_up ... 4588ptiir3
You do not have the required permissions to view the files attached to this post.
Top

This year's Geminids meteor shower happened to coincide with the asteroid 3200 Phaethon passing near the Earth. On December 15th, I managed to capture Phaethon's movement from 16:30 to 17:30 UT against the star background. Fortunately, two meteors from Geminids came into the scene during this period. There are two galaxies in the picture, the Andromeda galaxy and the Triangulum galaxy.​
Top

2017 Gemini Meteor Shower (Northeast Sky Area)
http://weibo.com/checkmates
Copyright:Sun Si (Checkmates)
7027cec1ly1fmhejua98gj21290qowqw[1].jpg
http://wx4.sinaimg.cn/large/7027cec1ly1 ... 0qowqw.jpg
You do not have the required permissions to view the files attached to this post.
Last edited by bystander on Mon Dec 18, 2017 4:20 pm, edited 1 time in total.
Reason: Please, no hotlinks to images > 500Kb. Uploaded as an attachment.
Top

Total : 29,5 hours
You do not have the required permissions to view the files attached to this post.
Top

Description:
"A person if he observed the Moon on the sky at the same time on two consecutive days, on the second day would find it moved more to the East than the day before; to find it in the previous position it should wait another 51 minutes. This happens because the Moon, during its revolution, returns to the sky at a point very close to that of the day before on average every 24h51 minutes: this is due to the combination of the orbital movements of the Moon and the Earth. Let's see why: we define the lunar sidereal month as the interval between two successive alignments between the Moon and a star on a meridian and this time span lasts 27 days, 7 hours and 43 minutes. This value indicates the real revolution time which also corresponds to the true period of rotation around the Earth. The synodic or lunar month is the interval between two equal Moon-Sun alignments (oppositions or conjunctions) and lasts on average 29 days, 12 hours, 44 minutes. This period varies during the year and also indicates the duration of a cycle of lunar phases. The temporal difference between the synodic month and the sidereal month derives from the fact that while the Moon revolves around the Earth, the Earth-Moon couple also revolves around the Sun. If the Earth does not revolve around the Sun but remains stationary with respect to it, then the synodic month and the sidereal month would coincide. But the Earth moves around the Sun of almost 1 ° a day (360 ° / 365 days a year provides precisely ~ 1 ° a day) and then in the 27 days and beyond the sidereal month the Earth (and consequently also the Moon ) moves about 27 °. To re-align with the new moon, the Moon must rotate 360 ​​° + 27 ° + another 2 ° because while it travels the other 27 °, the Earth, even if slightly, has further moved.
Ultimately, while in the sidereal month the Moon must rotate around the Earth by 360 °, in the synodic month it must rotate by about 389 °: hence the different duration of the month which is 27 days in the first case and over 29 days in second, then each day must rotate for another 51 minutes in order to return to the same meridian of the day before. Here is explained why observing the Moon day by day to the same one is seen more and more moved to the East.

Intrigued and fascinated by this peculiarity of celestial mechanics, I decided to photograph the curve that the Moon describes on the celestial vault, joining the points on which it returns day by day every 24h51 minutes and waiting every time it returns to the meridian. Later I compared this curve resulting from the lunar revolution with the solar analemma that is generated during the solar revolution.

On the web I found some curves of the lunar revolution already photographed and wrongly called "lunar analemma": this is a dialectical forcing because only the "eight" curve that makes the Sun can be called "analemma" for its etymological definition. The analemma (from the Greek ανάλημμα) indicates the pedestal of the solar sundial and therefore can not be referred to the Moon. In my opinion this lunar curve should be called a "synodic curve".

I took the photos in the time period between two full moons: from the Full Moon of November 4 to that of December 3 (the highest and brightest moon of 2017 and reaching the perigee the next day), so I placed the discs on a view facing south, placing the Meridian in the middle. The result is a heart-shaped curve with the second full moon higher than the first of about two degrees. This is because, taking off in November, I was approaching the Winter Solstice; if instead I had photographed in the months following December, the second full moon would have been lower.

The shots mounted on the frame were performed every 74h33 minutes that correspond to three days plus the respective 51 minutes of the daily lunar delay. All the shots to the moon discs were performed with a DSLR Canon 5DMK3 with the EF 24-70 / 2.8 optics closed to the focal length of 30mm, while the panorama with a Sigma 14mm f / 1.8Art. With Photoshop CC I have processed the disks taken during the day, contrasting them and darkening the sky, and mounted the curve.

The solar analemma was filmed with a Canon 5DMK3 SLR with the EF 24-70 / 2.8 lens closed to the 24mm focal length, while the panorama with a Sigma 14mm f / 1.8Art, from December 1st 2016 to December 1st 2017. The shots were always performed 1h after the passage to the Meridian of the solar disk, so it is slightly tilted to the right.

The solar analemma was filmed with a Canon 5DMK3 SLR with the EF 24-70 / 2.8 optics closed to the 24mm focal length, while the panorama with a Sigma 14mm f / 1.8Art, from December 1st 2016 to December 1st 2017.The Castle on the background is The Forte Michelangelo, a fortress that protected the historic port of Civitavecchia. The fortress was begun in 1508 and completed in 1537 under the pontificate of Paul III, with the direction of Antonio da Sangallo. The main tower of the fort, was designed by Michelangelo Buonarroti, from which the name of Forte Michelangelo."
You do not have the required permissions to view the files attached to this post.
Top

Rolando Ligustri wrote: in twenty years as a comet photographer, it's the first time I've seen a blue one.
the "puff" that you see in N-O I think it is a remnant of the outburst a few days ago

What can the reason be? I would love to know!

A Gem near the head of Orion, Barnard 30/LDN 1577/CED51
Copyright: Jon Talbot
Full res image and exposure information is available here: http://www.starscapeimaging.com/page217/index.html
Barnard 30-31 1920.jpg
You do not have the required permissions to view the files attached to this post.
Top 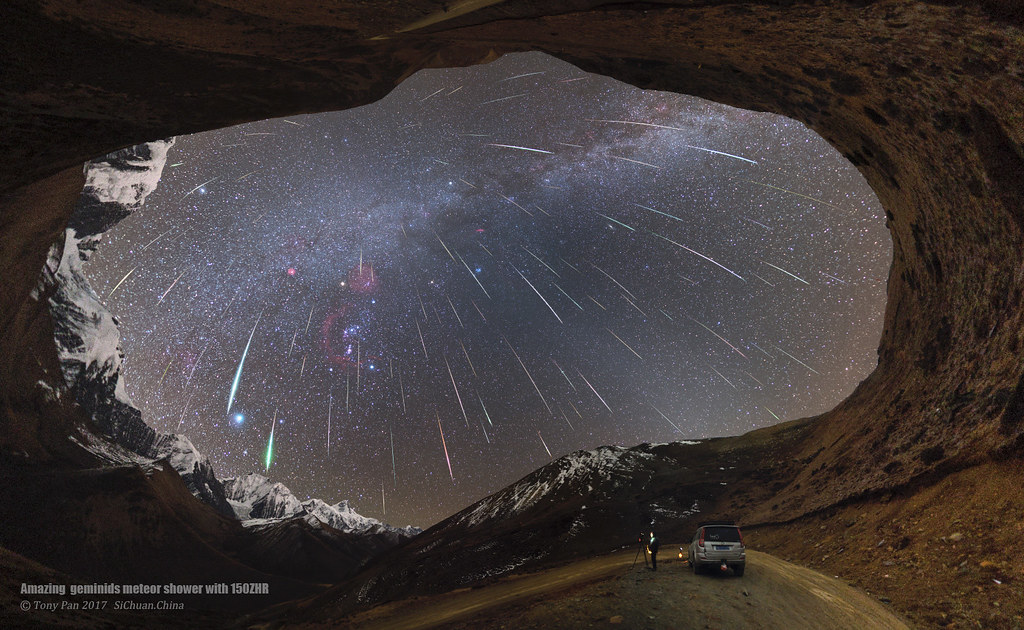 gamma_cygni_apod.png
Regards,
Delberson.
You do not have the required permissions to view the files attached to this post.
Top

M20_apod.jpg
Regards,
Delberson.
You do not have the required permissions to view the files attached to this post.
Top 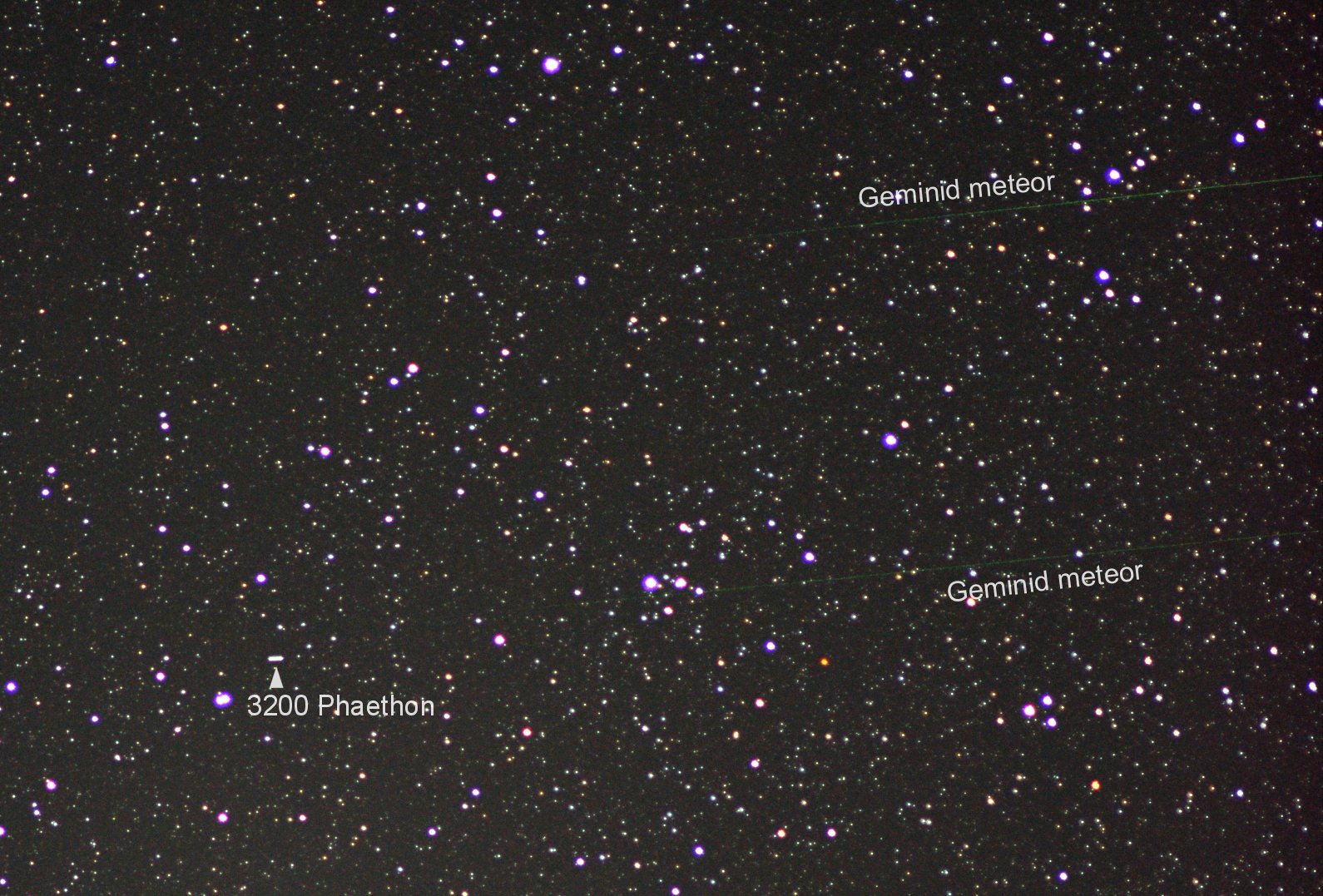 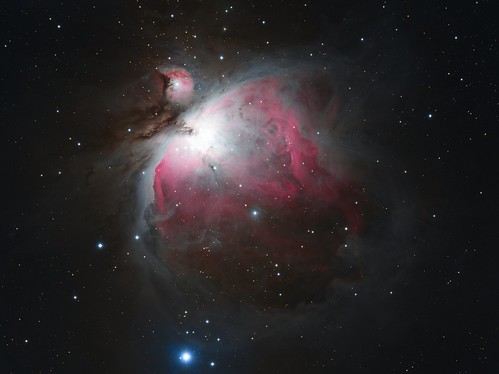 The Orion Nebula by Danny Flippo, on Flickr
Top

Sh2-290 or Abell 31 is an ancient planetary nebula about 2,000 light years distant. A planetary nebula is created when a low-mass star blows off its outer layers at the end of its life. Sh2-290 is one of the largest known planetary nebulae, with a diameter of about 7 parsecs. The bluish interior is from energized oxygen atoms. The bright side of the nebula is due to its interaction with ambient interstellar gas.

Hope you enjoy this Christmas tree with its running angle perched high above on a bejeweled nebular tree. 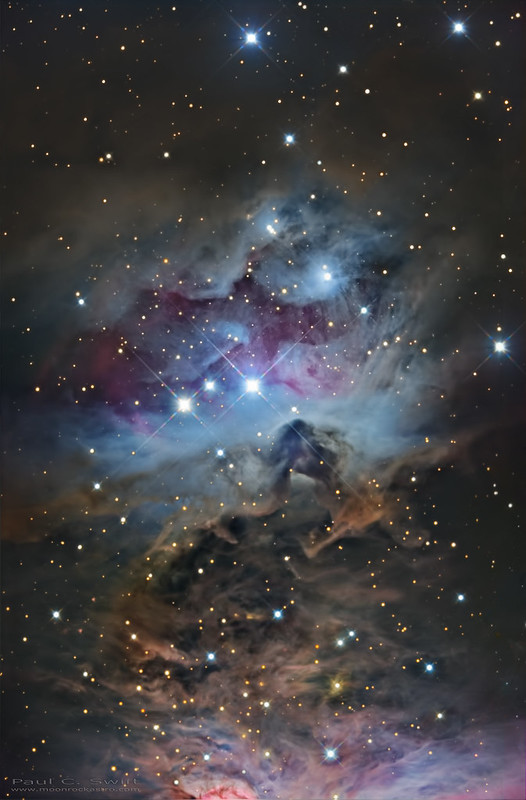 IC 5146 - The Cocoon Nebula
Copyright: Hermann von Eiff
IC_5146_HvE_Dec_20_2017.jpg
You do not have the required permissions to view the files attached to this post.
Top

NGC 247 is an intermediate spiral Galaxy located in the constellation Cetus. It is a member of the sculptor group and is located approximately 11.1 million light years away. The most striking feature of this Galaxy, the void, contain stars that are different from those around. They are older, redder and colour, and much fainter. This suggests that the star formation within the void has been arrested. It is believed that star formation slowed a billion years ago. We are still unsure how the void has formed. Recent studies suggest it might have been caused by gravitational interactions with another galaxy, or even a recent interaction with a nearly dark subhalo that collided with the disc.

The centre of the Galaxy is visible as a bright whitish patch surrounded by mixture of stars, gas, and dust. Silhouetted against the background of stars the dust and gas has formed interesting filaments.

comets on a photograph of the comet panstarrs C/2011 L4

938.jpg
You do not have the required permissions to view the files attached to this post.
Top 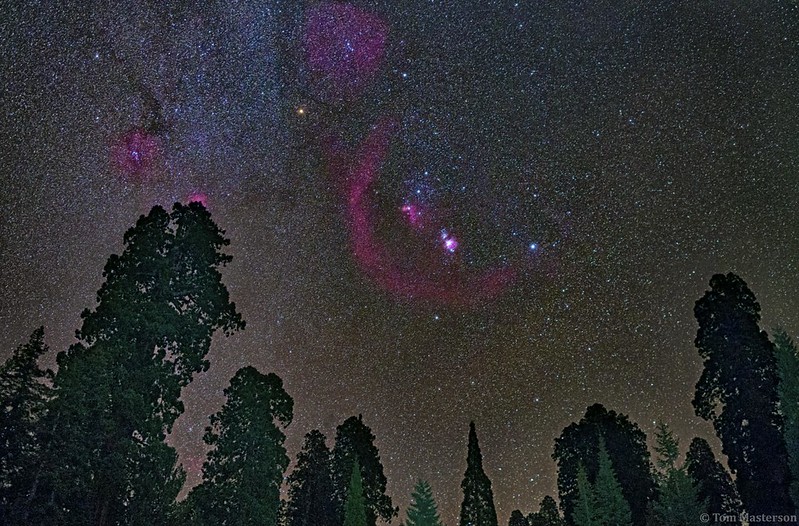 Orion Rises Over The Giant Sequoias by Transient Astronomer, on Flickr

Messier 106 and some friends.

Thank you for looking! 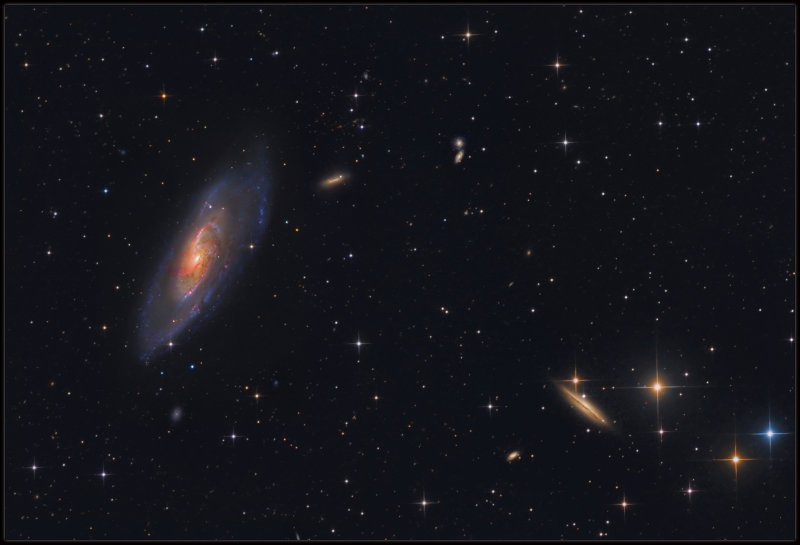 SIRUS A AND B

Located in the constellation of Canis Major, Sirus A and B, it belongs to a binary system, separated between them by the estimated distance between Earth and Uranus.

total frame 47Hr done with CDK20 on Paramount ME2 with Moravan G4 in Flagey , France 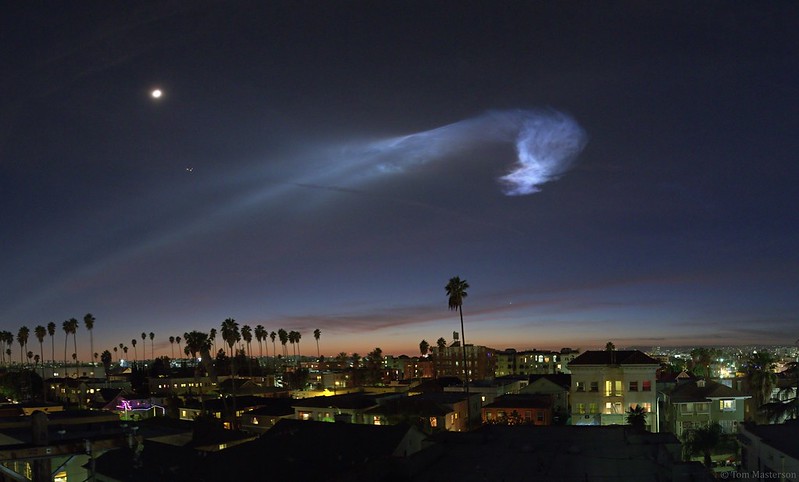 SpaceX Falcon 9 Launch of Iridum-4 over Los Angeles 12/22/2017 by Transient Astronomer, on Flickr