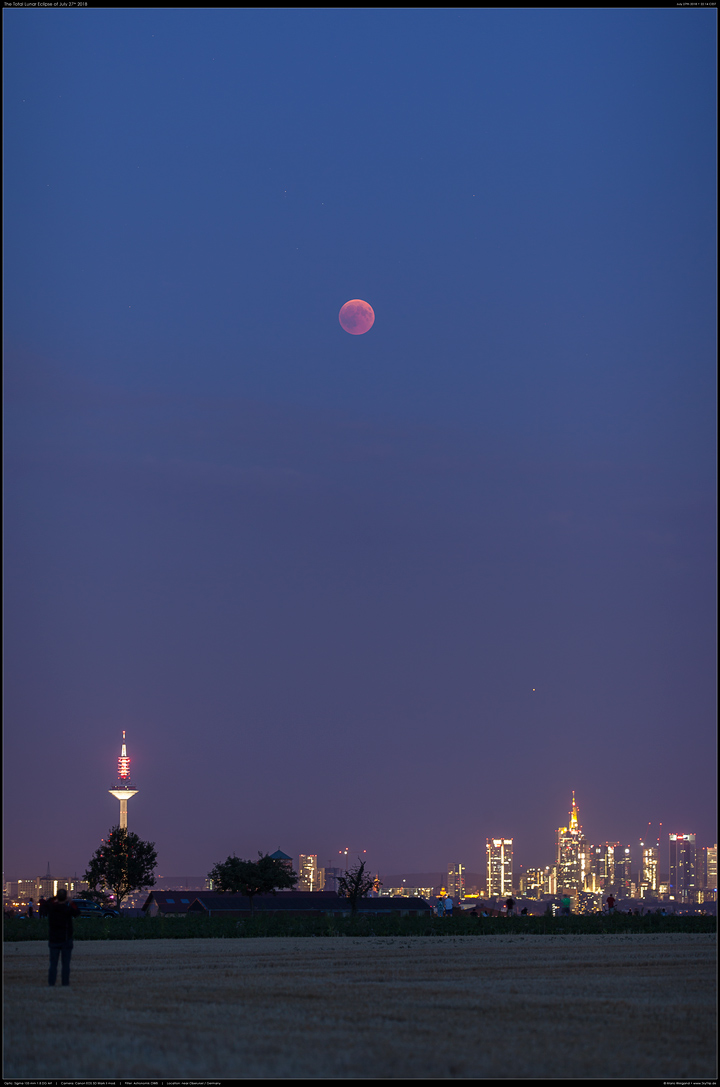 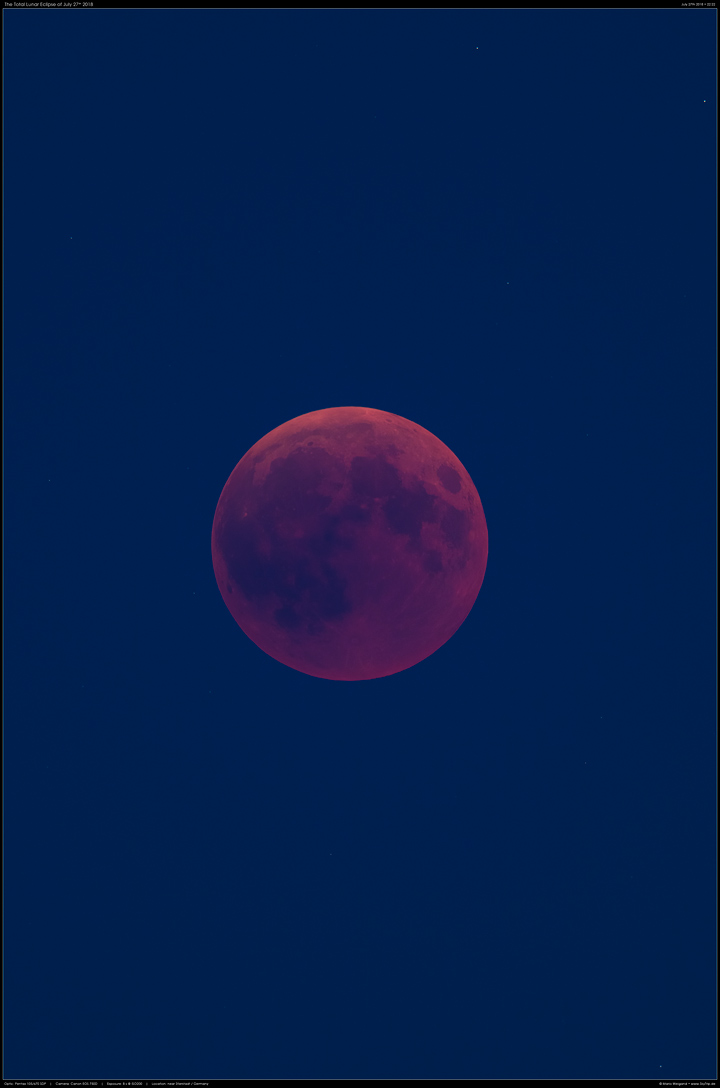 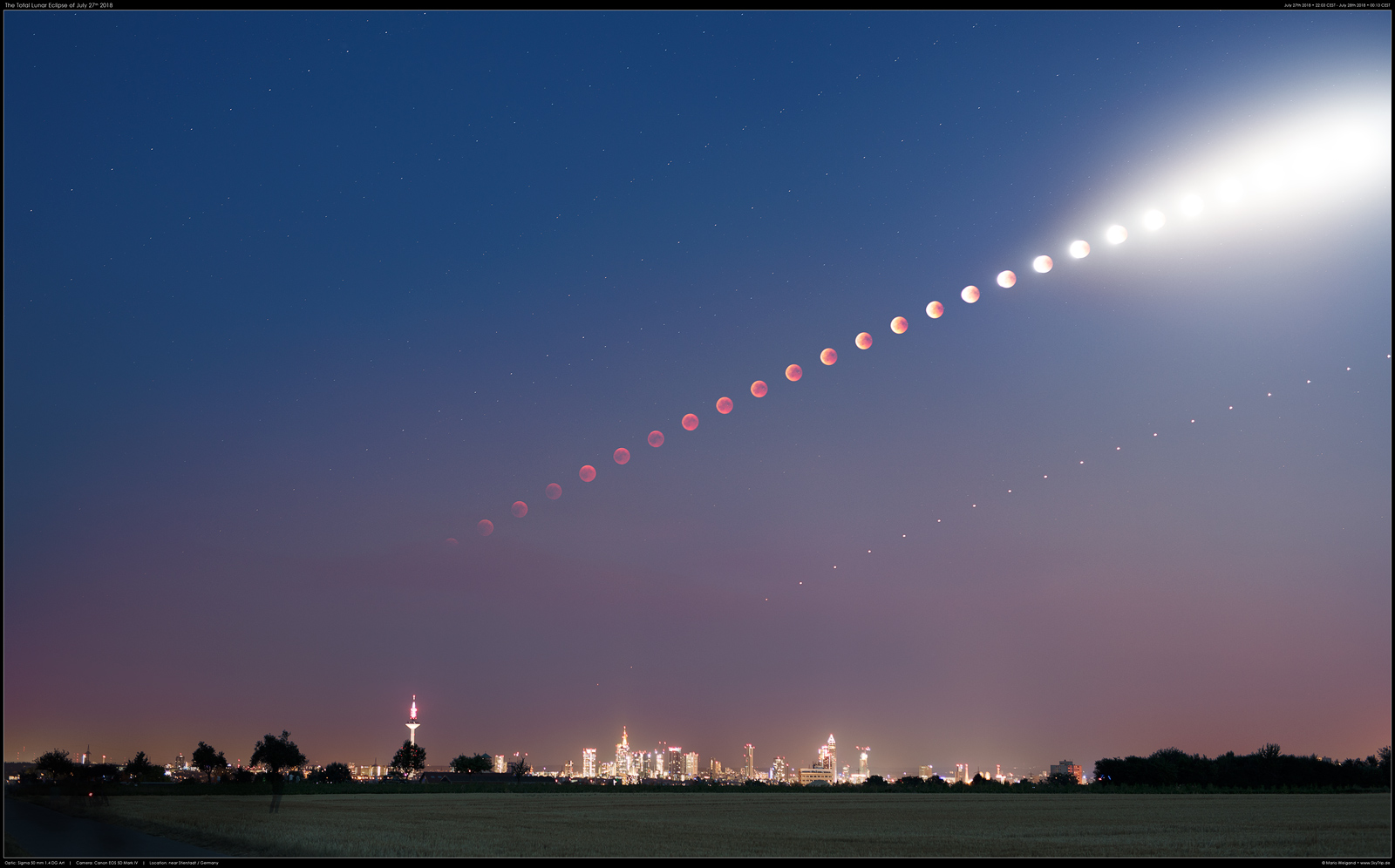 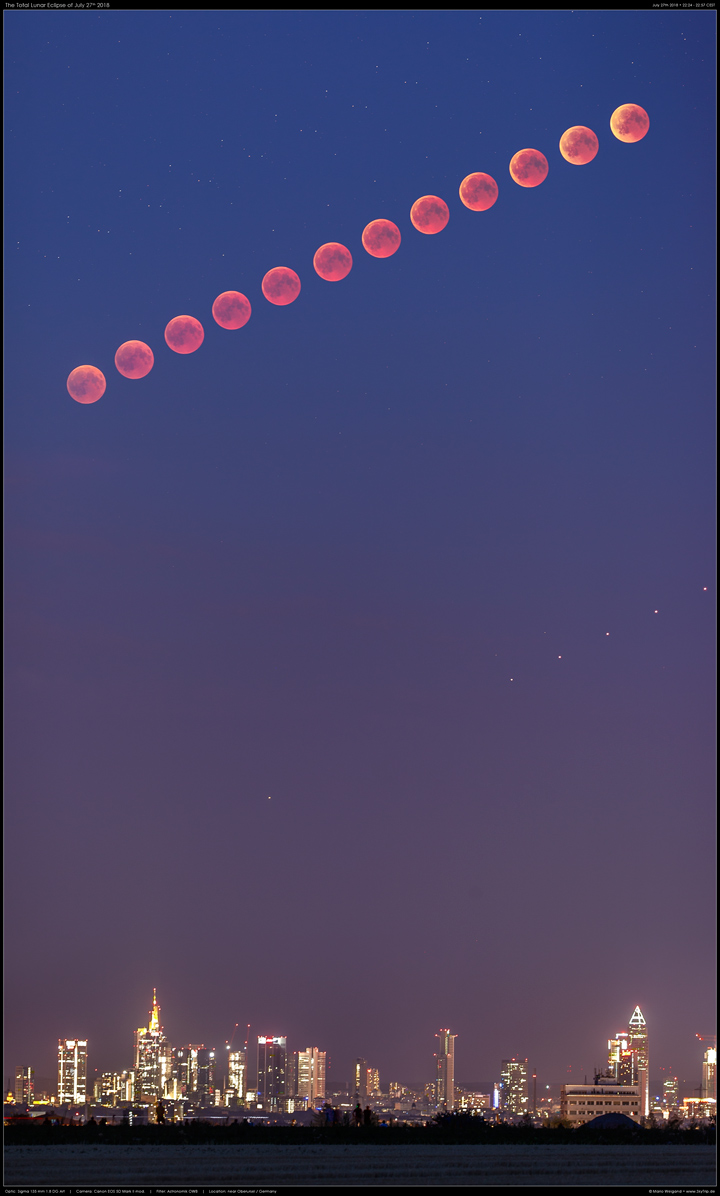 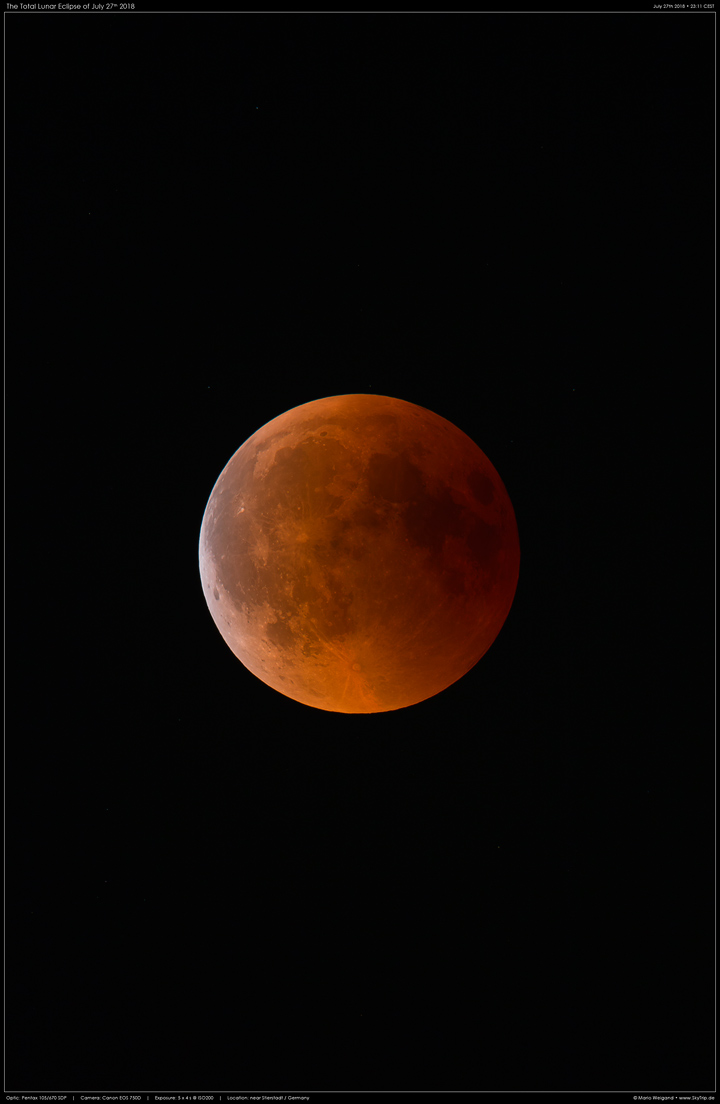 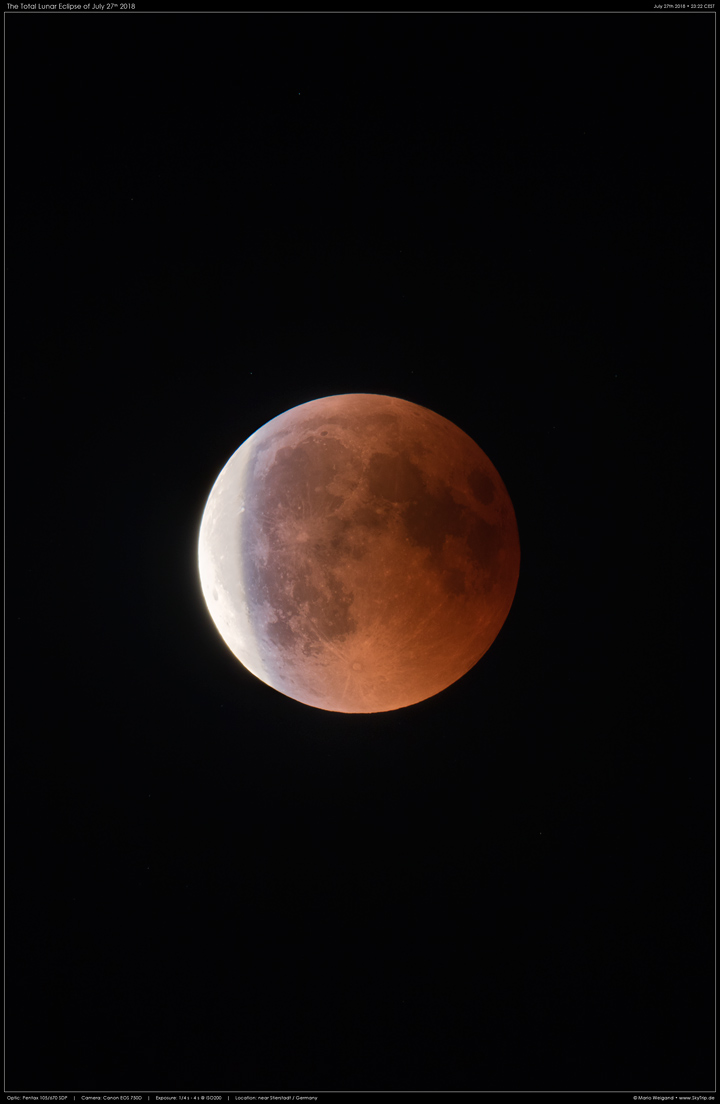 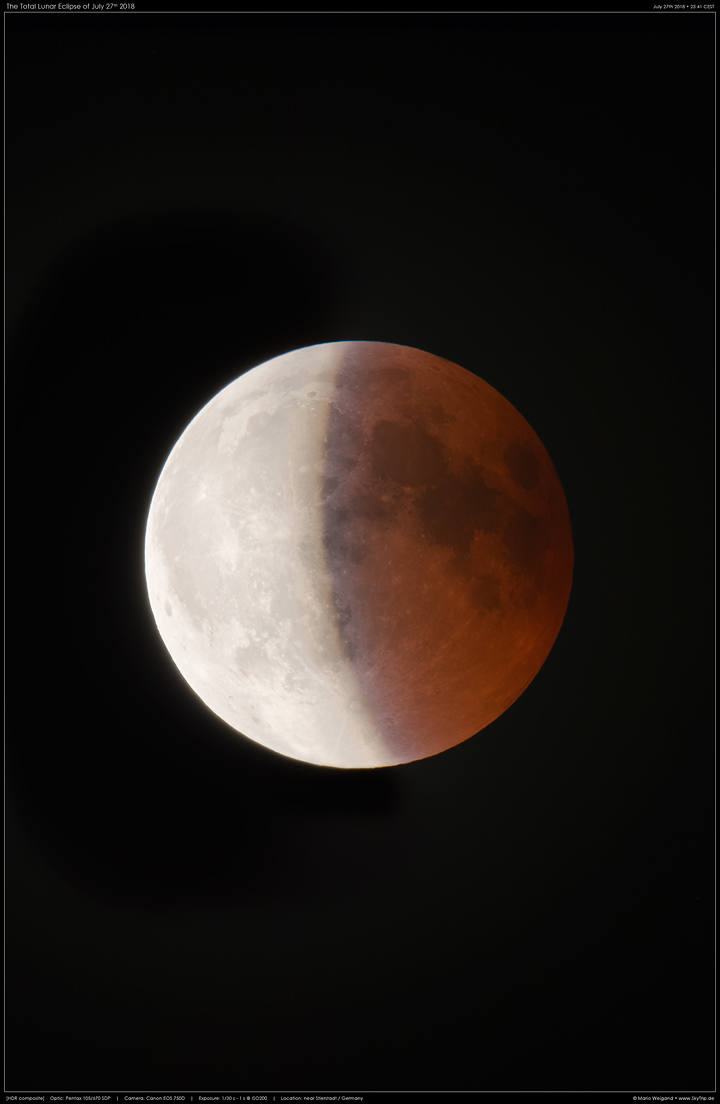 Composition of 9 images taken Friday, July 27th from Italy with the eclipse visible starting from the Moon rising with the same still immersed in the evening twilight.
The images were taken with a Canon 1100D mounted on a TeleVue 108/880 apochromatic refractor from the Lodigiano astronomical observatory.

A single image that picks up the Moon coming out of the shadow cone, you can also see some stars in the field.

The lunar eclipse of July 27 and the milky way in Sardinia.
www.ivanpedretti.com
Copyright: Ivan Pedretti 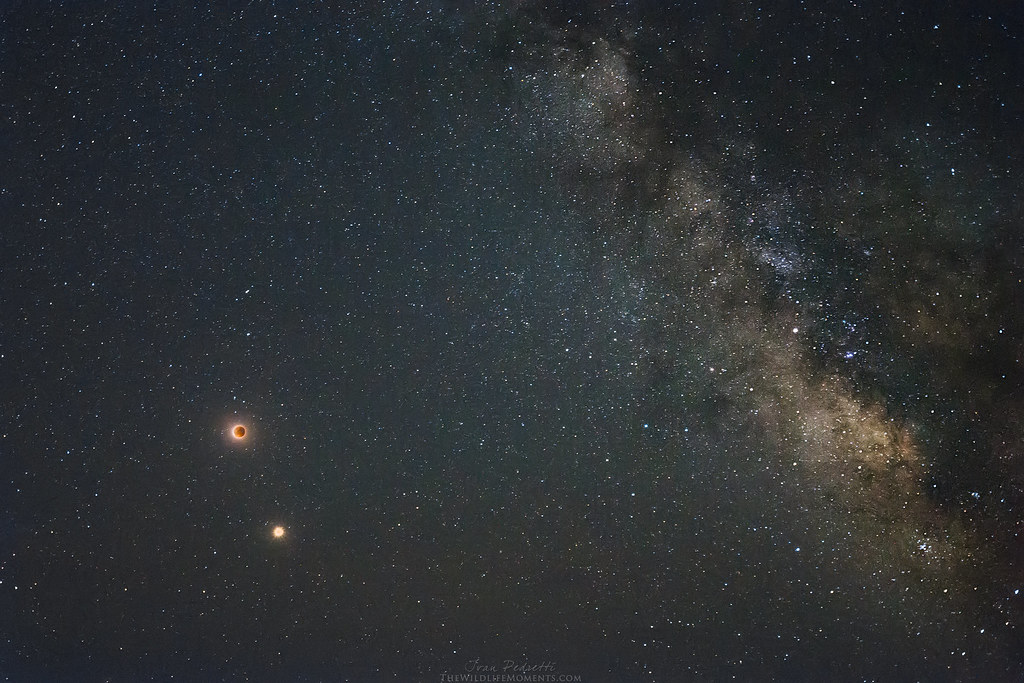 After the eclipse, now if 'Winter is coming'
Tower of joy
https://www.flickr.com/photos/68018999@N08/
Copyright: Jose Luis Sanchez

The Milky Way with the planets Jupiter, Saturn and Mars; the full moon eclipsed in the castle of Zafra (Tower of joy in the series Game of Thrones)
Milky way over Zafra Guadalajara. Spain. 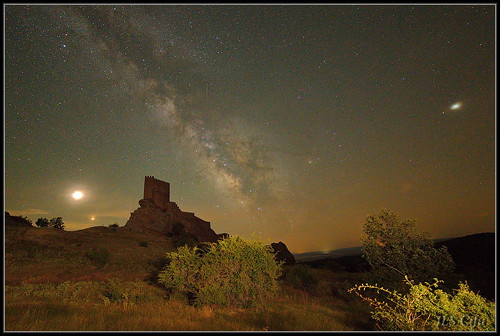 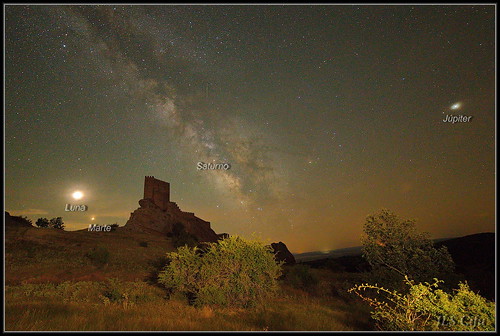 Aristotle is a relatively new impact crater, situated in the north-eastern quadrant of the Moon, on the south shore of Mare Frigoris and east of the mountainous region known as the Alps Mountains.

THE ULTIMATE SIGH OF THE LUNAR ECLIPSE
I got 135 videos, 320 images and I will have a good time to process everything.
It was an incredible moment, even in the midst of clouds, unique experience, I leave for you the last image I made of this event.

For me it was the moment that surprised me the most during the whole eclipse, when the sky opened and this beautiful image appeared.


In 2018, very unusual astronomical situation occured: both perigee and apogee full Moons were totally eclipsed. The perigee one, on 31 January 2018, was one of two so called „supermoons“ of 2018 and also second full Moon of the same month (in UTC time), making this one Super Blue Blood Moon. The apogee one, on 27 July 2018, was even more interesting as the eclipse itself took a central stage as the century’s longest one (with 1 hour and 43 minutes long duration of totality). Next time both perigee and apogeetotal lunar eclipses occur in 2033 and 2036. To preserve true angular proportions of both captured eclipses, during its maximal phases, I used completely identical equipment: Canon 6D, Canon 6D, MTO 1100mm, f10.5 on Vixen GP-2 mount, with same camera settings too.

The eclipsed Moon and the surrounding stars
Copyright: Alessandro Carrozzi 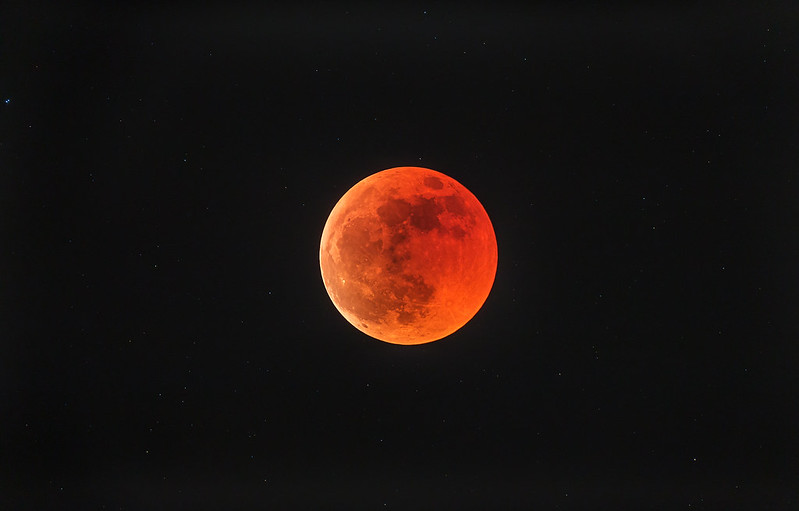 It was 2:30 in the morning and we were 1200m above sea level. Far away from the nearest large civilization. There are only lost villages of a few tens of inhabitants, some without even streetlights, for hundreds of kilometers.

After more than 10 hours of going to the desert, we knew it was going to be a hard journey, but it would be worth it to be in a lost in a place little visited that has one of the most AWESOME skies I have seen in my life.

Plant yourself in the middle of the desert, look around 360º and see nothing but a huge 19 x 11 kilometer stretch of flat sand that ends in mountains that you never see growing from far away.

Look up and see the sky fall on you...There were dark areas that had never seen anything more than a photo. The galactic core... indescribable. It shone in a way that cannot be described. And see how the stars came out on the horizon, almost as dark as in the zenith is spectacular.

Here, in this photo, I appear, sitting on a chair, with the Milky Way behind me, already descending and hiding behind the distant mountains.

The United States has touched my heart ... its people, its life, its cities, its magical landscapes, the warmth with which it receives you, its endless roads, its burgers, everything... This trip has marked a before and after in my life. 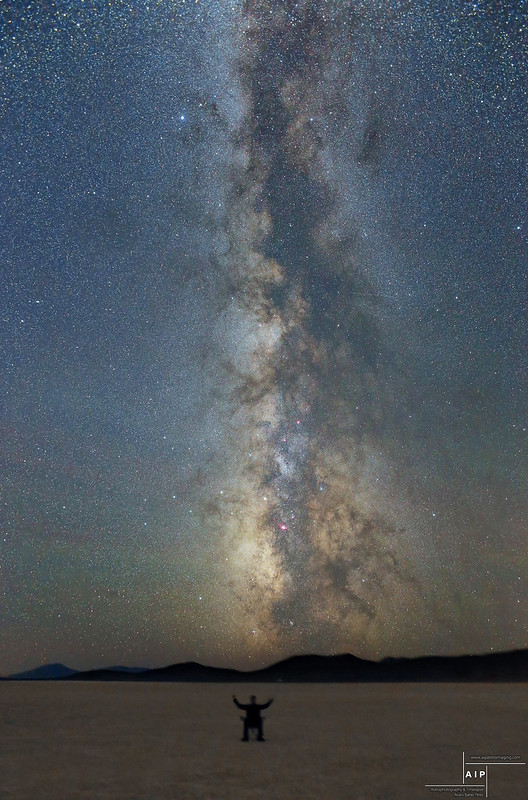 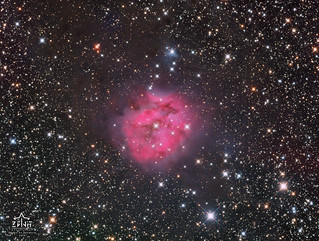 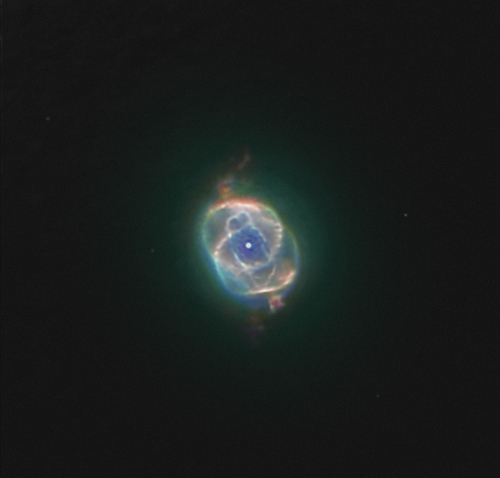 The Night when Mars is closest to Earth
http://NightChina.net
Copyright:Steed Yu
火星最近的那一夜，2018年7月30日摄于北京苹果园-75%.jpg
Today, Mars is closest to us, less than 57.6 million kilometers from the Earth. In other words, for humans on Earth, Mars appears to largest tonight.

In the early hours of the morning, I took photos of the moon and Mars. Putting together two photos, you can intuitively feel how big the largest Mars will be compared to the common moon.
You do not have the required permissions to view the files attached to this post.
Top

Lunar Eclipse over Germany
Copyright: Marco Ludwig
In northern Germany the moon was rising total eclipsed. So we didn´t see the first part of the Eclipse. But for the 400 visitors of our Observatory in Neumünster it was just perfect. A summer Lunar Eclipse under perfect conditions and right after sunset.
Those seven pictures I took with my Canon EOS 60D and a 480mm Williams APO sitting on our 2000 pounds and 48 inch Newton. 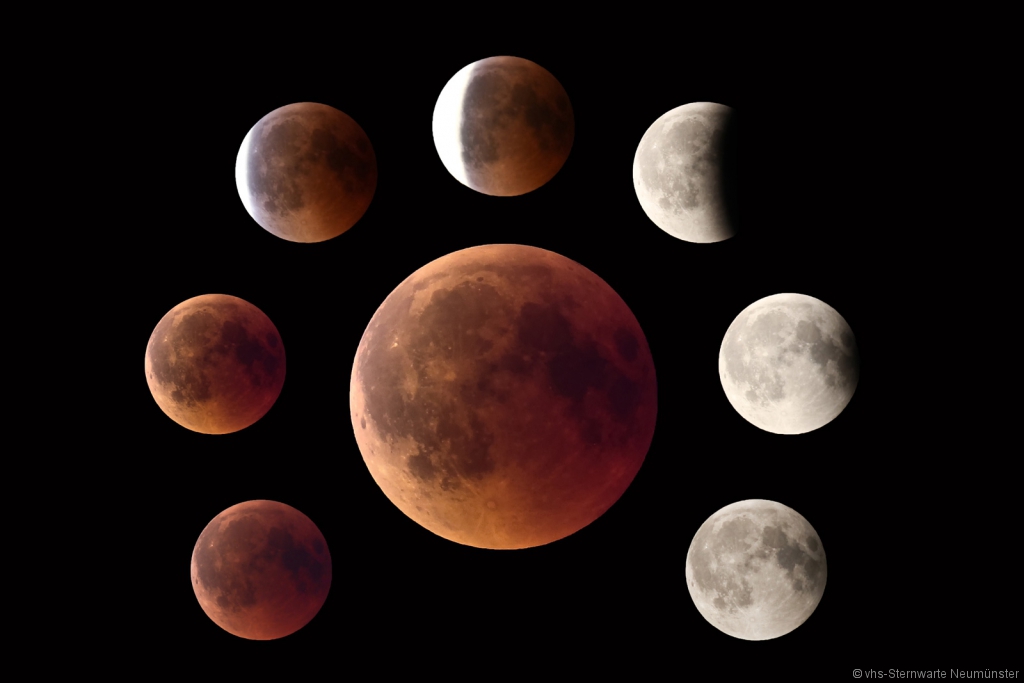 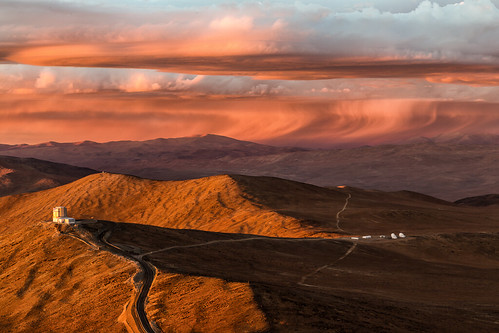 Storm over the Atacama desert by Juan-Carlos Munoz-Mateos, on Flickr
Top

The surface of the crater is cut by a multi-channel system (rille), which gives a "fractured" appearance to the floor. This channel system was named after Rimae Gassendi. The various channels on the crater floor are the result of volcanic and tectonic forces.
In April 1966, members of the "BAA Lunar Section" reported the appearance of a sudden reddish glow in Gassendi. This reddish coloration was confirmed by several experienced observers of the time. From there, Gassendi became a hot target for the search for Transient Lunar Phenomena - transient lunar phenomenon, brief or fleeting, which are described as rapid appearances of lights, colors or change of appearance in the visual, which could demonstrate the existence of volcanic manifestations, escape of gases or other geological processes that supposedly would imply that the moon would not be geologically dead.
(Vaz Tolentino)

Kepler Crater
Kepler is highlighted by the system of bright rays created by debris ejected during the impact that excavated the crater. The rays cover the "tide" around them and extend for more than 300 km, crossing rays of other craters

Mars on July 31st at its closest approach to Earth opposition today.
You do not have the required permissions to view the files attached to this post.
Top

Downloading the Dust on the Red Planet

Certainly my best photo of Mars this year, many details easily visible both at the wavelength of visible and in the infrared.
Vallis Marineris stands out in the center of the photo as well as several other regions around him, but what caught my attention was the presence of Olympus Mons at 10am as well as the 3 volcanoes of Tharsis a little more towards the center, they can be seen easily as terrain elevations and not simple blemishes.
https://www.astrobin.com/full/359232/0/?nc=user
Top

This image shows one of my favourite regions in the Northern skies. It's the region surrounding the star Sadr in the constellation of Cygnus. This image was made using astrodon narrowband filters for Ha (5nm), OIII (3nm) and SII (5nm).

Processing done with Astropixelprocessor and photoshop. 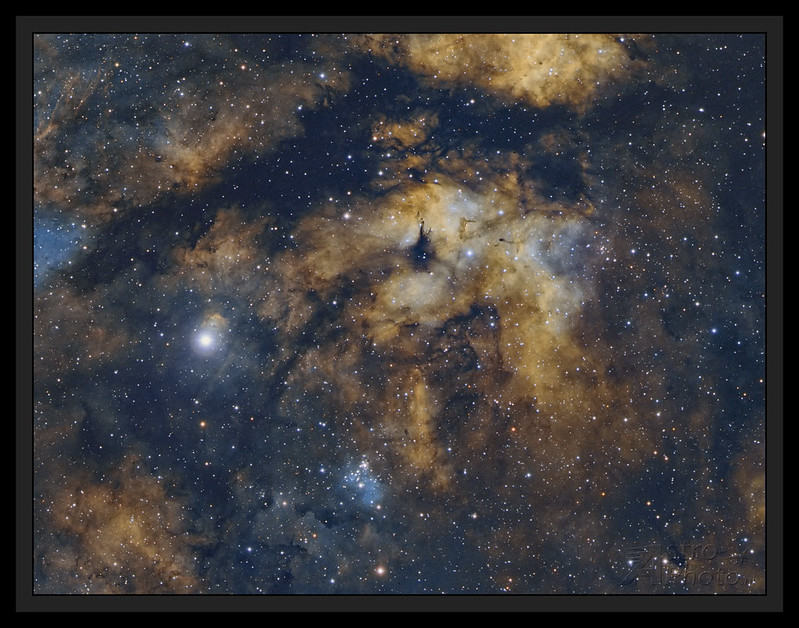