is a diffuse nebula in the constellation Cepheus, within a larger nebula complex containing emission, reflection, and dark nebulosity. Sh2-155 is an ionized HII region with ongoing star formation activity, at an estimated distance of 725 parsecs (2400 light-years) from Earth.
Sh2-155 was first noted as a galactic emission nebula in 1959 in the extended second edition of the Sharpless catalogue, being a part of the much larger Cep OB3 Association. Although Sh2-155 is relatively faint for amateur observation, some of its structure may be seen visually through a moderately sized telescope under dark skies.
Sh2-155 lies at the edge of the Cepheus B cloud (part of the Cepheus molecular cloud), and is ionized by young stars from the Cep OB3 association. It has been suggested that radiation from the hot O-type star HD 217086 is compressing the region, triggering the formation of a new generation of stars. A study of the region’s young stellar objects by the Chandra X-ray Observatory and Spitzer Space Telescope shows a progression of stellar ages in front of the cloud, supporting the hypothesis of triggered star-formation. 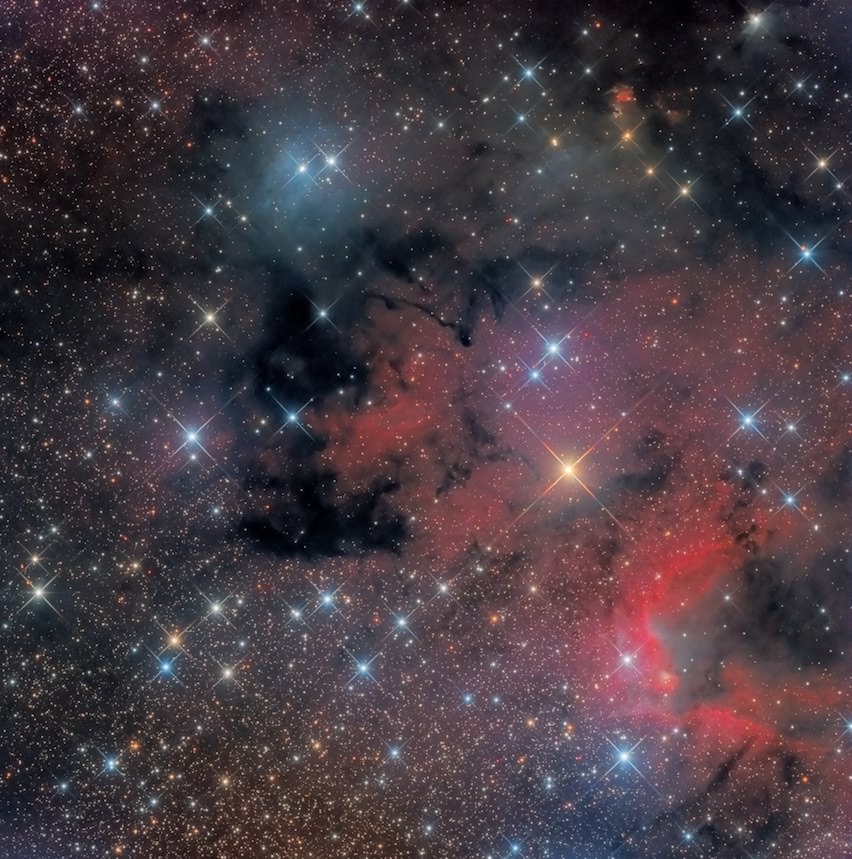 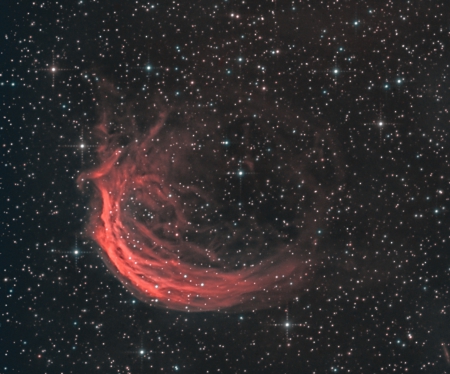 Processed with AstroPixelProcessor and Photoshop CC. 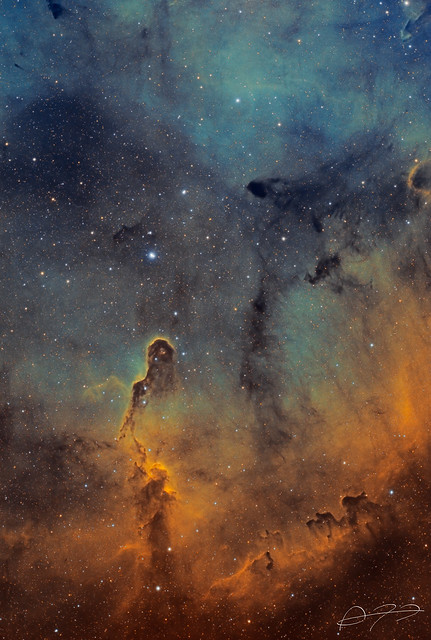 Deep inside the Seven Sisters 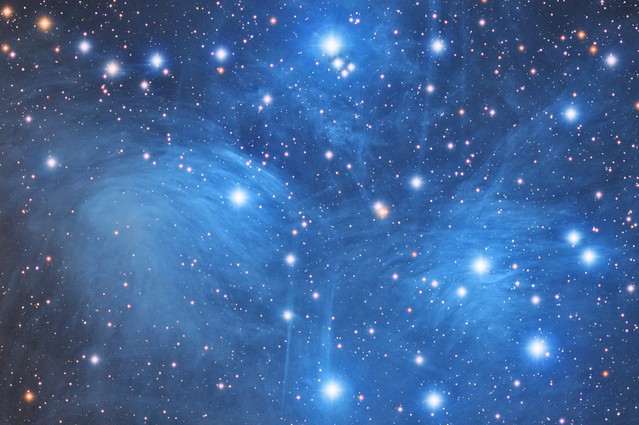 Deep inside the Seven Sisters by Kees Scherer, on Flickr 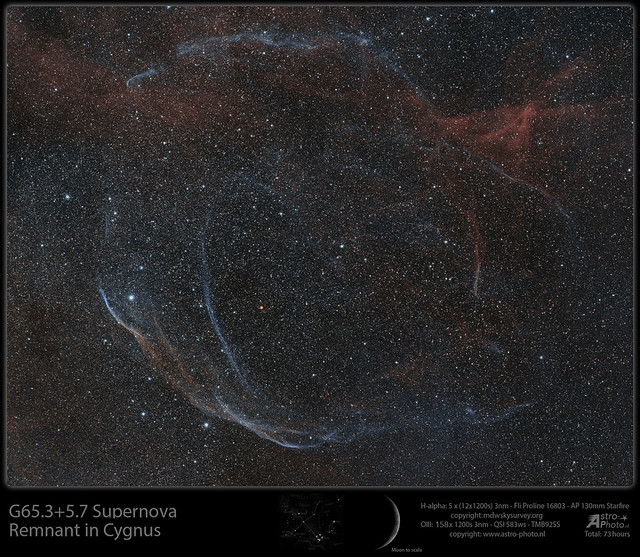 
Here is the result of my large summer-2018 project. I have been imaging this region for about 13 nights altogether between July and October 2018. You can call me crazy, using so many nights for just one object, in a region where clear nights are rare

But I really wanted to see if I could catch this beautiful Supernova remnant, and I'm glad it succeeded

Supernova remnants (SNR) are formed when a large star ends its life in a supernova explosion. About 300 of these remnants are currently known in our galaxy. One of the most famous remnants, the Veil Nebula, is located in the constellation of Cygnus. Although this is the most famous one in this constellation, it’s not the only SNR. Cygnus contains several obscure SNR’s, among which SNR 65.3+5.7 (also known as SNR 65.2+5.7).
SNR G65.3+5.7 was discovered by Gull et al. (1977) during an OIII survey of the Milky Way. Some parts of this SNR were already catalogued by Stewart Sharpless in his SH2 catalog as SH2-91, SH2-94 and SH2-96, but they were not recognized as being part of a bigger structure at that time. The idea that they could be part of a larger SNR was postulated by Sidney van den Bergh in 1960, but it took until 1977 for this to be confirmed.
This is one of the larger SNR in the sky spanning a region of roughly 4.0x3.3 degrees. Mavromatakis et al. (2002) determined the age of the SNR to be 20.000-25.000 years and the distance about 2.600 – 3.200 lightyears. The shell has a diameter of roughly 230 lightyears! This SNR is a predominantly OIII shell with also some H-alpha signal.

This supernova shell is quite weak and there are hardly any high-resolution images of this region. In the internet maybe 5-10 deep images of this shell can be found and, in most cases, they don’t cover the entire shell or the resolution is quite low because it was done by using photo lenses at short focal lengths. That’s why I decided to see if I could try to image the entire shell using my equipment, a TMB92 refractor in combination with a QSI583ws ccd camera. Because of its large size I needed to make a 3x3 mosaic to cover the whole region.

As so many nights were already necessary to cover the region in OIII I didn’t succeed in grabbing the H-alpha data, but on the internet I found the MDWsurvey (mdwskysurvey.org) initiated by David Mittelman (†), Dennis di Cicco, and Sean Walker (MDW). This is a marvelous project with the goal to image the entire northern sky in H-alpha at a resolution of 3.17”/pixel. I contacted them and told them of my effort to grab imagery of this SNR and they were very kind to provide me with the H-alpha imagery of this region, so that the entire SNR could be brought into view in reasonable high resolution.

This bicolor image shows a combination of about 53h of OIII data (made by myself) and 20 hours of Ha-data (made by the MDW survey) in a single image. In this way the full span of the shell can be seen in all its glory.

Bubble Nebula - NGC 7635 - Hubble Palette:
This nebula discovered by William Herschel in 1787 is visible in the constellation of Cassiopeia, and is about 11,000 light years from us.
The shots cover a period that goes from late August to mid-October, but despite the two months used I have totaled "only" 30 hours of integration due to bad weather.

This is the link with the shooting data 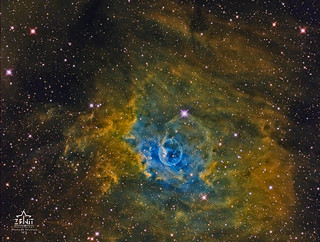 Location : Thessaloniki Greece
You do not have the required permissions to view the files attached to this post.
Top 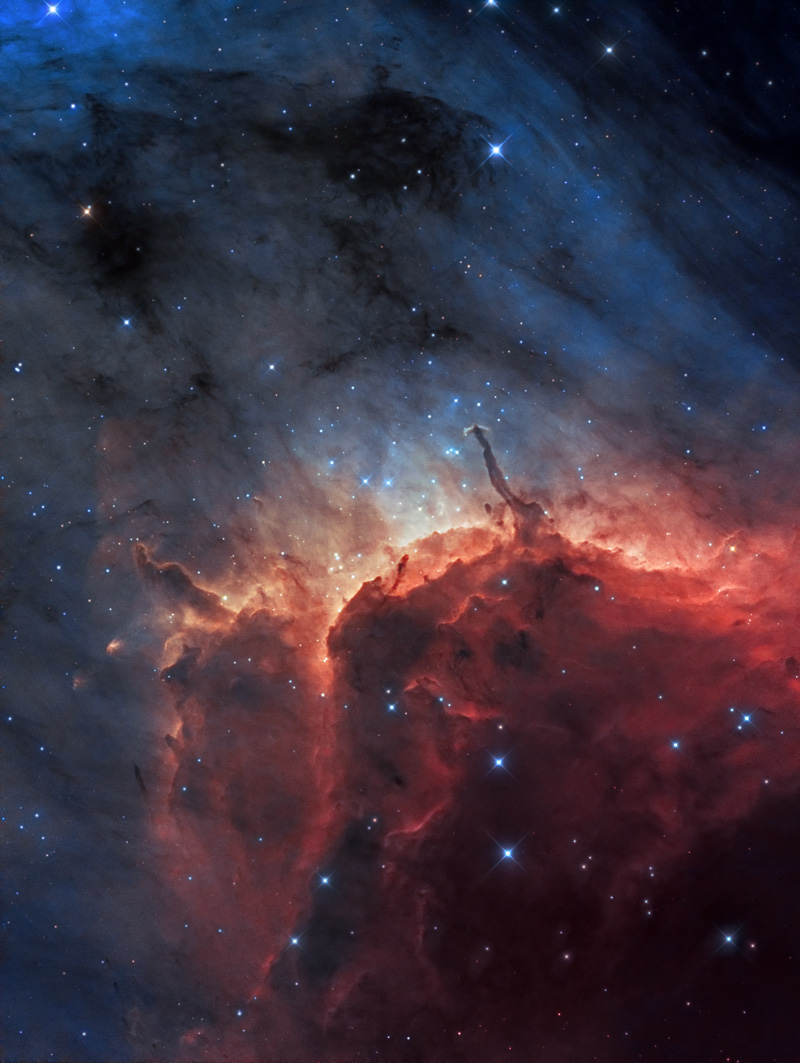 208_lorand_fenyes_m106.jpg
full image: https://www.fenyeslorand.hu/galeria/koz ... s_m106.jpg
You do not have the required permissions to view the files attached to this post.
Top

This is a very mysterious object, weak and difficult to see, but extended, at the same time. It recalls one of the most terrifying sea fantasy monsters: the giant squid. Discovered in the constellation of Cepheus in 2011 by the French astro-imager Nicolas Outters and then named with the acronym OU4.
It is located in a region called Ruby Shapley (SH2-129), also named Flying Bat Nebula.
Details:
H:24x900" astronomik 7nm
OIII:46X900" astronomik 6nm
Cannistra Technique
Moravian g2 8300 fw + Canon 200 f2,8
Pixinsight
CALAMARO.jpg
You do not have the required permissions to view the files attached to this post.
Top 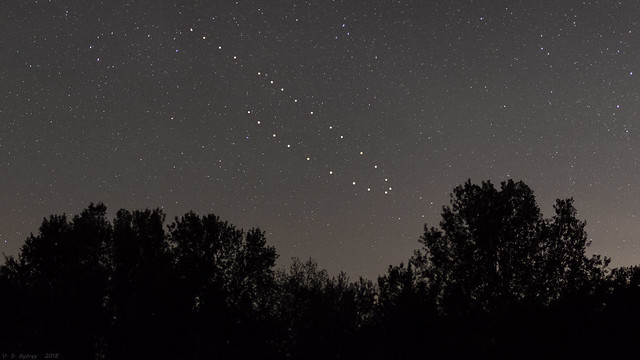 The solar granulation at high resolution (0.1"/pixel) in green light, taken from the French Alps at 2930m altitude in August with a 356mm telescope (C14).
A window of (relatively) stable seeing allowed me to make this animation showing the evolution of the solar surface during 16 minutes. The lifetime of the cells is very short, only a few minutes!

Here is the latest version of my image of the little Veil in Cygnus: 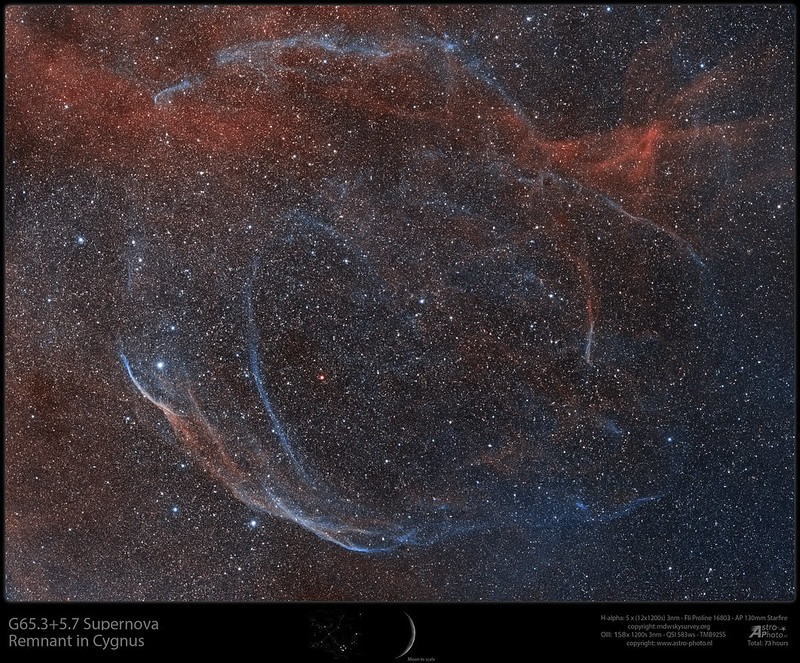 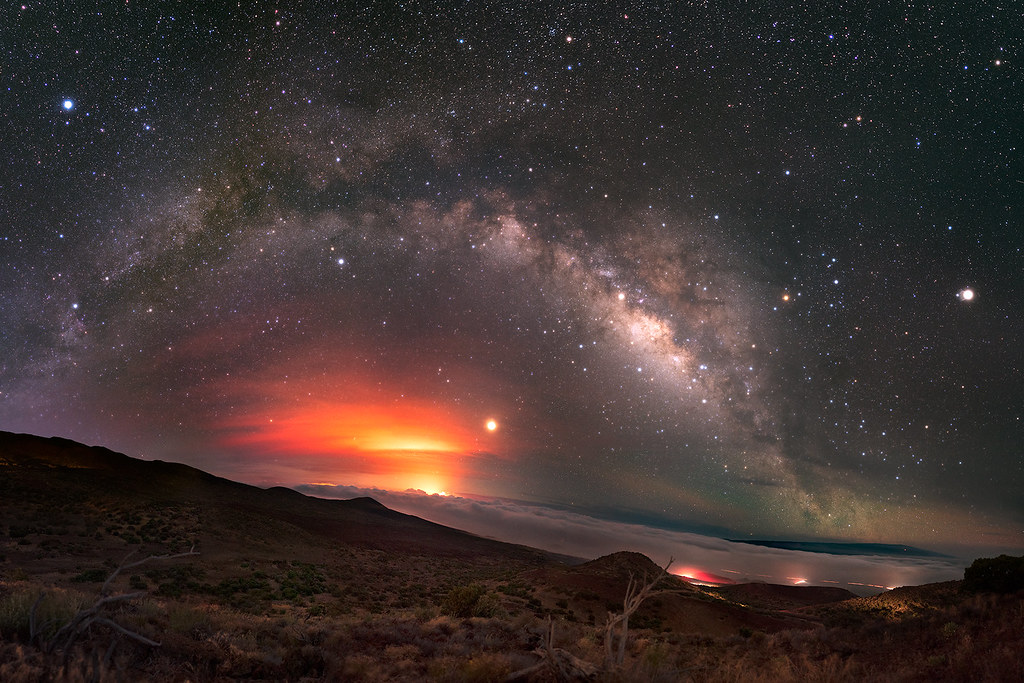 When you get a chance, share the night sky with someone you care about. You just don't know how big of an impact you'll have on their life, and those memories are something to cherish.

I wanted to visit Maunakea and experience the night skies. I was fortunate enough to have a watched sunset and then the Milky Way came into view right before the Moon rose above the horizon. In this picture, the lava glow from Kilauea can be seen under the arching Milky Way. The clouds blanketed the valley and made for a spectacular experience.

I was lucky enough to give an impromptu night sky education class to a family visiting from Long Island, NY while shooting this panorama. They were absolutely blown away by how many stars and planets were visible that night.
Top

A Large Emission Nebula in Cassiopeia

For larger image see: http://astronomersgroup.org/gallery/dis ... fullsize=1
You do not have the required permissions to view the files attached to this post.
Top

The central bulge in all three galaxies are of similar brightness. NGC 6771 has an interesting boxy shape which is indeed a rare occurrence among galaxies. It is unusual in that it has two comparatively straight dark lanes and a fainter arc that curves towards the third galaxy

Both NGC 6769 and NGC 6770 are spiral galaxies, yet very different. NGC 6769 has very tightly wound spiral arms, while NGC 6770 has two major spiral arms, one of which is fairly straight pointing towards the outer disc of NGC 6769. The blueish colour of the spiral arms indicate the presence of many star forming regions. 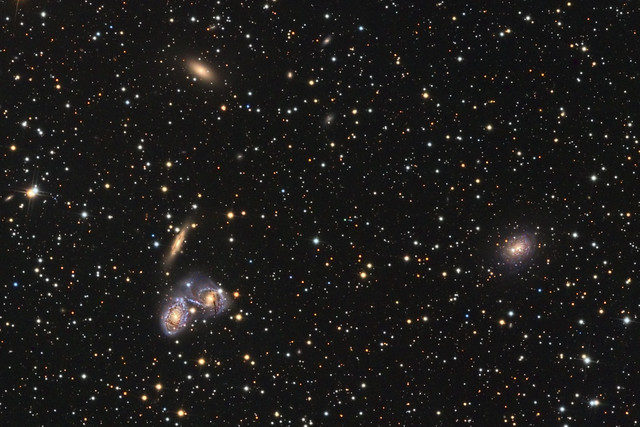 Some of my recent results processed this month:

Rolando Ligustri wrote: this is an interesting comet,46P Wirtanen, in this passage it will be very close to the Earth and it is expected a magnitude, a December, inferior to the 4 ^ magnitude , at the bottom there is his current measure af (rho) which in 10 days has increased by 30%

link for high res, https://www.astrobin.com/full/373023/0/
You do not have the required permissions to view the files attached to this post.
Top

From the flaming star to the spider and the fly
http://www.far-light-photography.at
Copyright: Arno Rottal

location: Malá Fatra in the Slovakia.

in the picture is: Little Fatra should be a place where it is dark at night. Unfortunately it is not, but the light in the landscape can sometimes make special pictures. Light is the picture in many forms.

The Pacman Nabula with amazing Bok globule.
~20h narrowband exposure, GSO RC12", Moravian G3CCD 16200, on ASA DDM85, with extraordinary seeing condition in Poland (~1,3-1,5 arc sec.).
You do not have the required permissions to view the files attached to this post.
Top

I decided on a more appropriate title for this one. I can't get the image of a baby penguin looking up out of my head. Enjoy!

Barnard175_v1.22_1200.jpg
Image copyright: Jason Guenzel
You do not have the required permissions to view the files attached to this post.
Top
105 posts