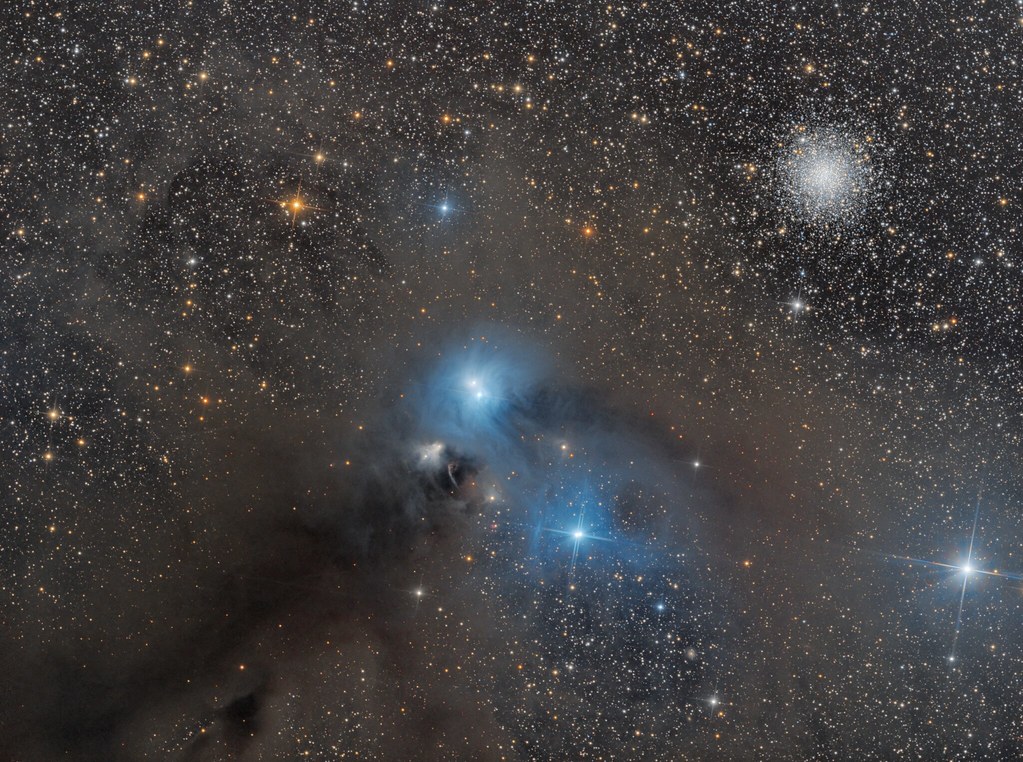 Wide field C/2020 F3 NEOWISE.
The photo was taken from Monte Lieto, 1944msl, Italy, on the night of July 18.
The image has an aproximate FOV of 18x23°, the comet tails overlap a large part of the Ursa Major constellation.
Copyright: Michele Guzzini 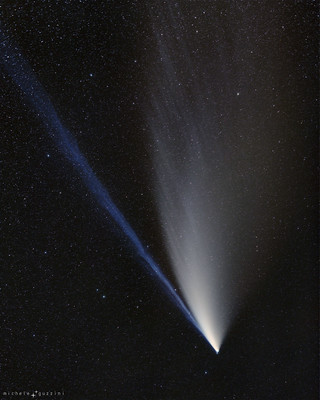 [bA giant summer[/b]
https://twitter.com/JLucDauvergne
Copyright: Jean-Luc Dauvergne
it would be a good time to publish an APOD with Jupiter and Saturn to encourage people to observe them. They are close to each other in the sky and we are near opposition (July 14th ofr Jupiter and July 21 for Saturn).
I did these images the same night on july 22th from my balcony in Paris with a Mewlon 300, they are at the same scale. Getting high resolution images from Paris is not that easy because they are at 18 and 19°.

The comet was tracked with a direct drive Planewave L600 mount at .5 arcsecond per minute drift error for over an hour. There's one minor position "pop" (cause TBD).

All 66 frames were then calibrated and batch processed with Pixinsight Automatic Histogram Transform (through Blink) followed by HDR and LHE.

Be sure to select the very BEST YouTube playback quality to not miss any detal. (-:
You do not have the required permissions to view the files attached to this post.
Top 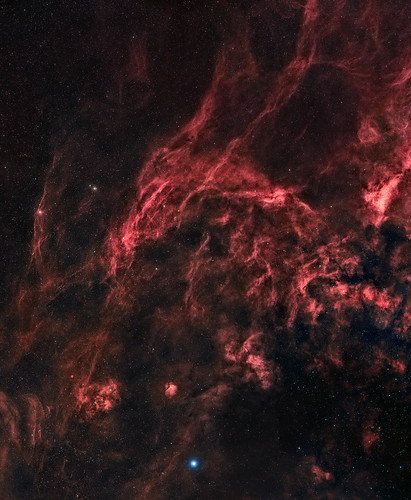 Comet NEOWISE and the ISS! 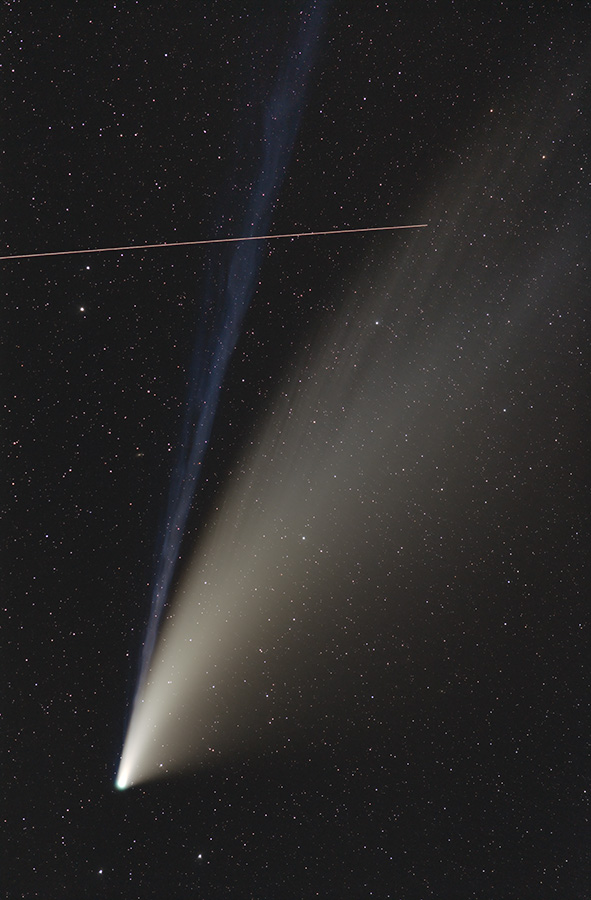 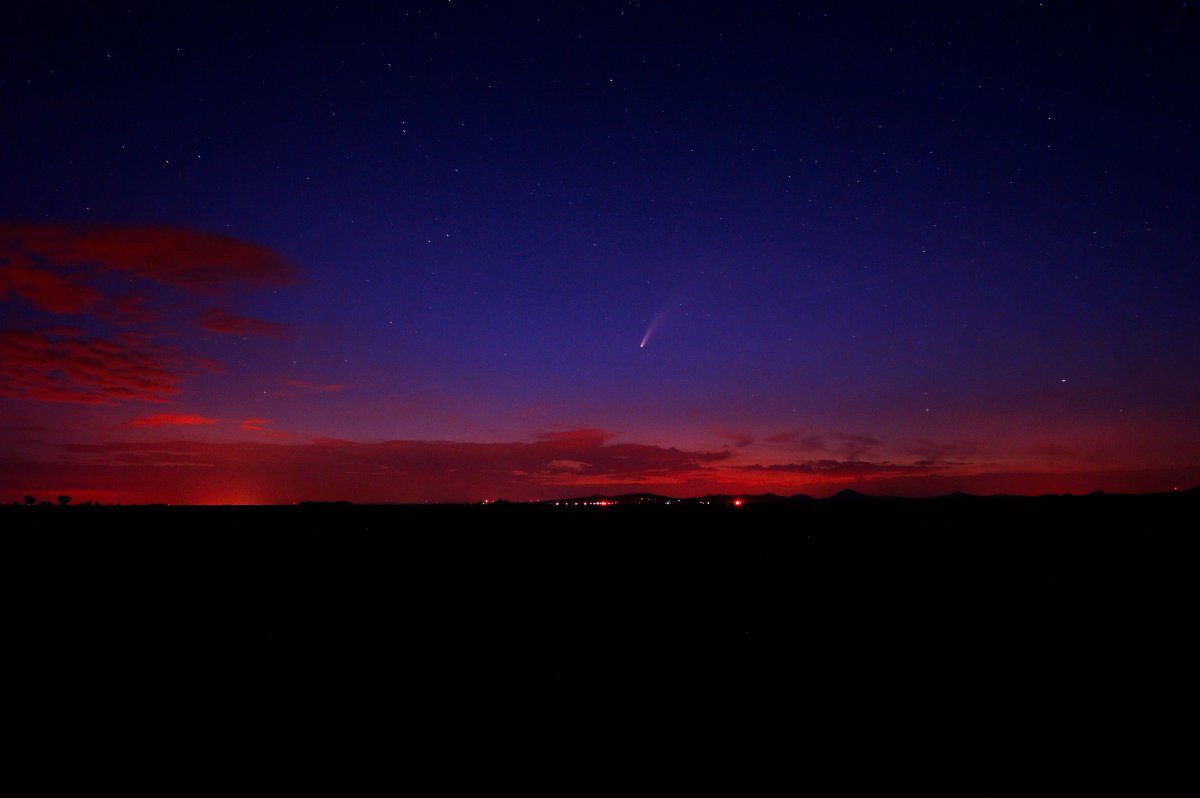 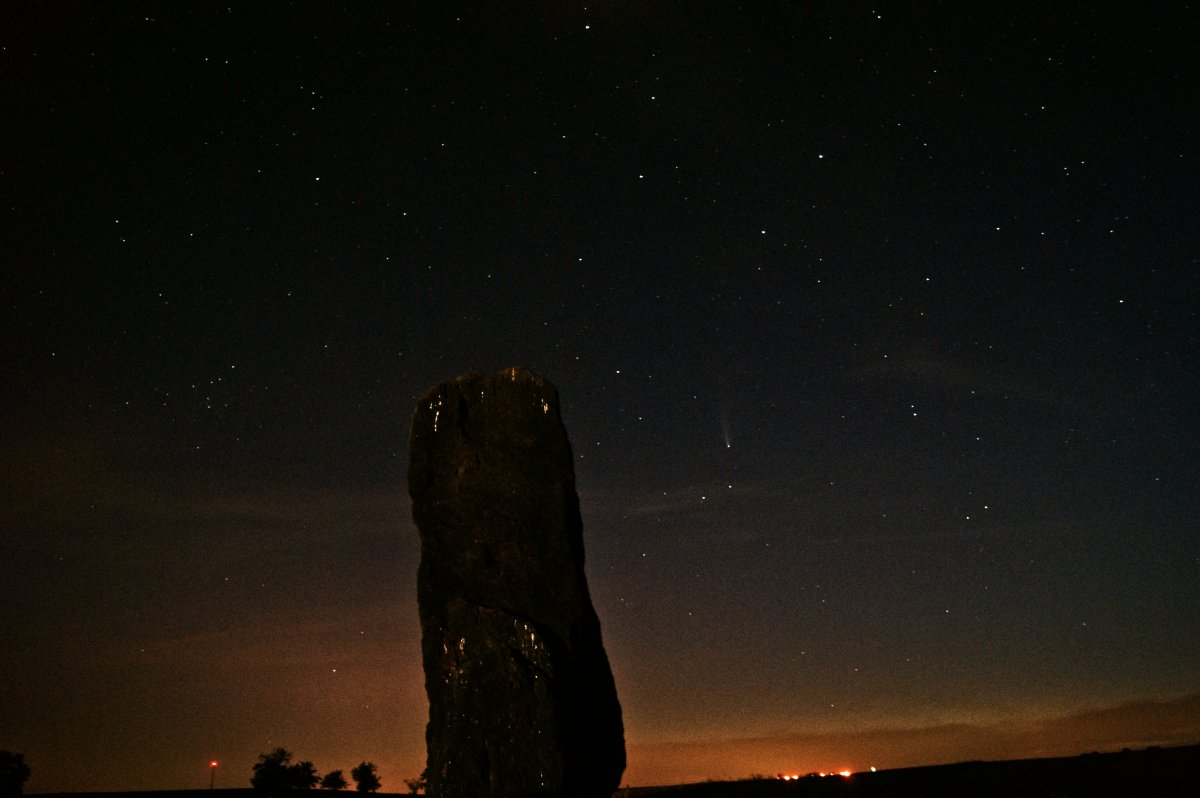 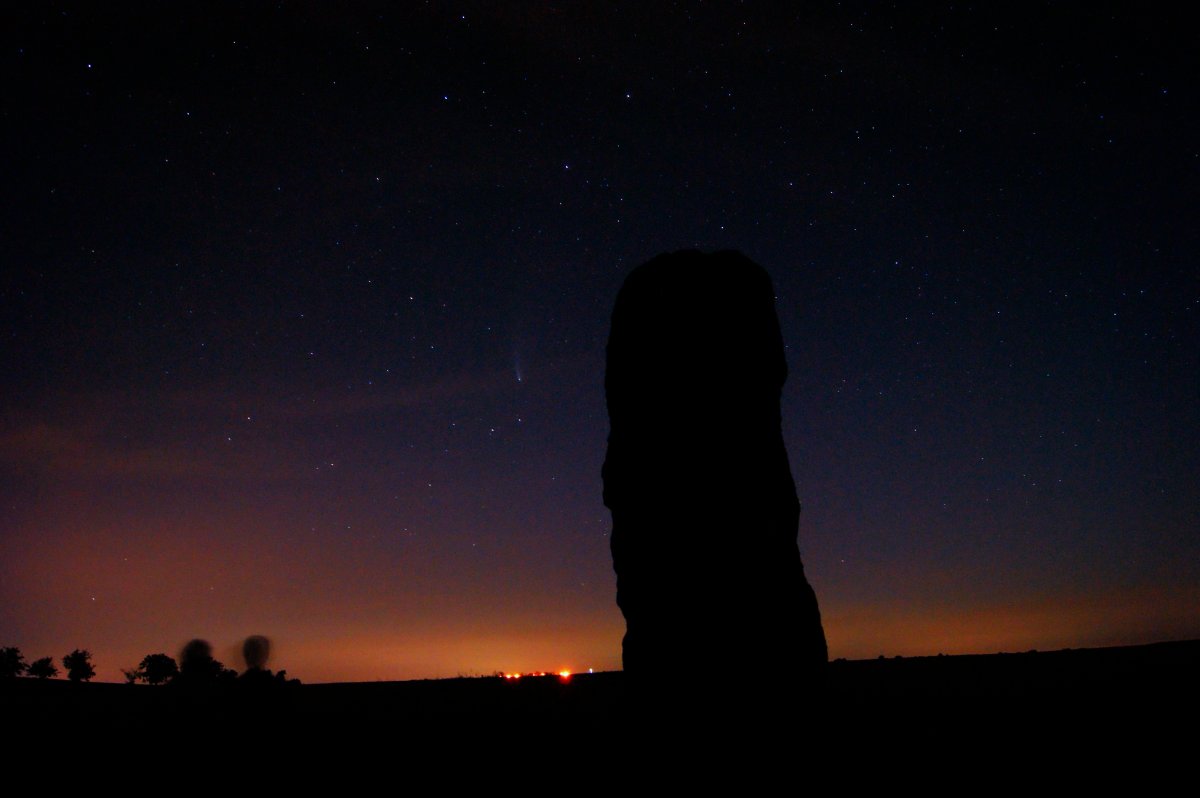 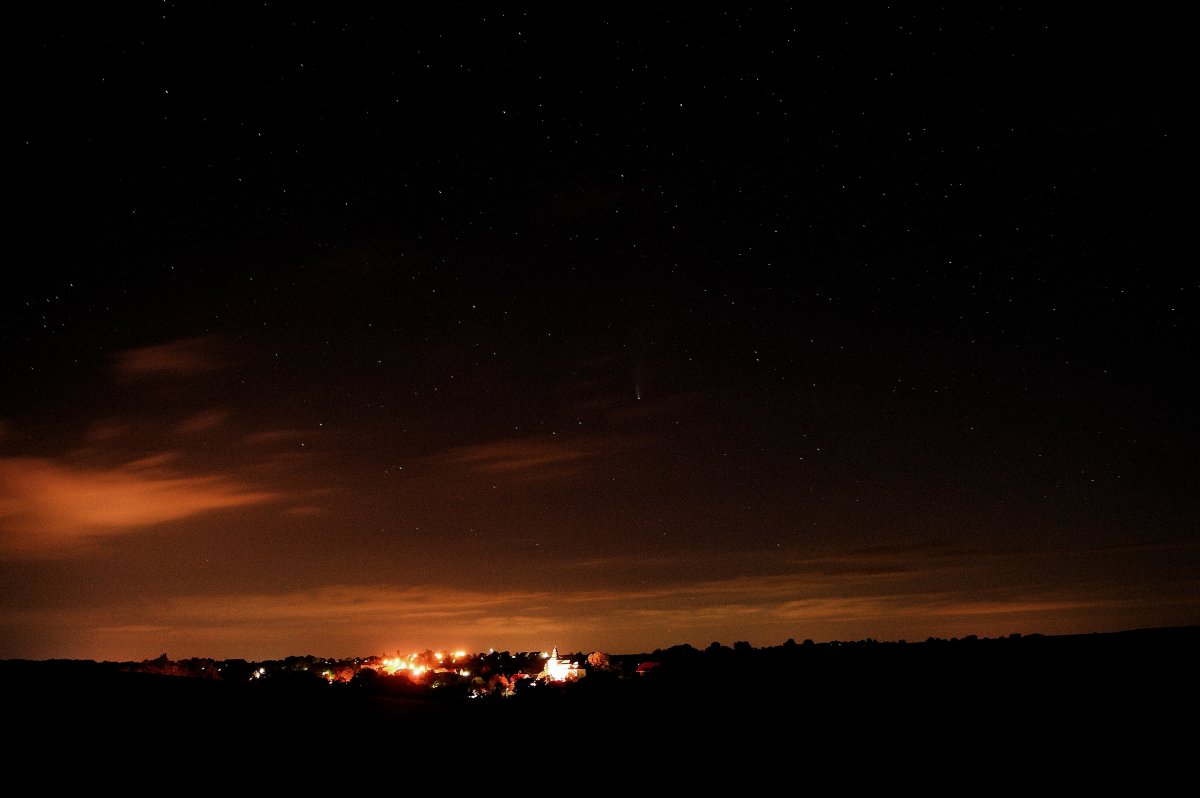 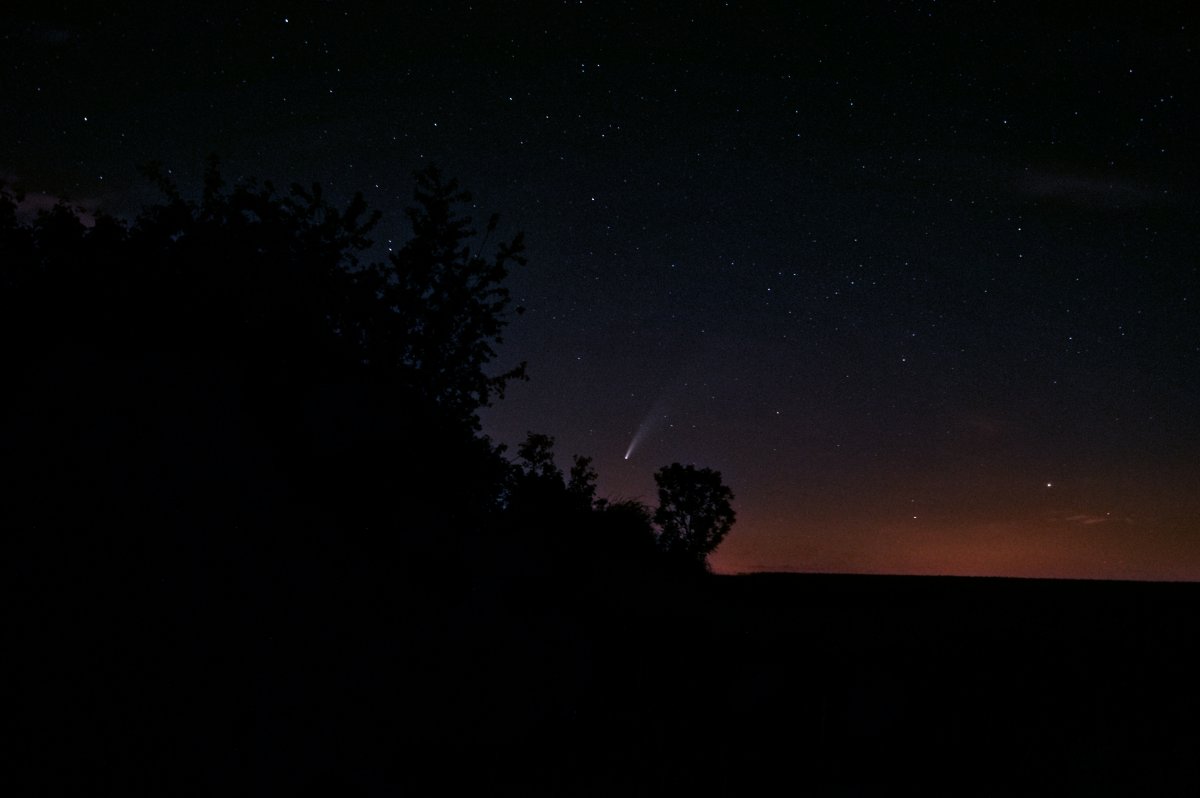 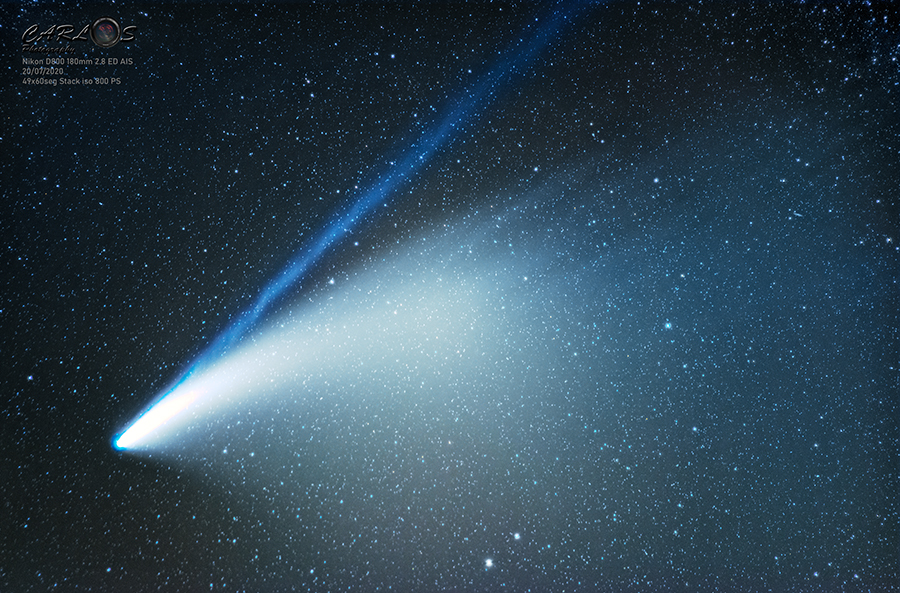 https://www.astrobin.com/9zxxjg/
You do not have the required permissions to view the files attached to this post.
Top 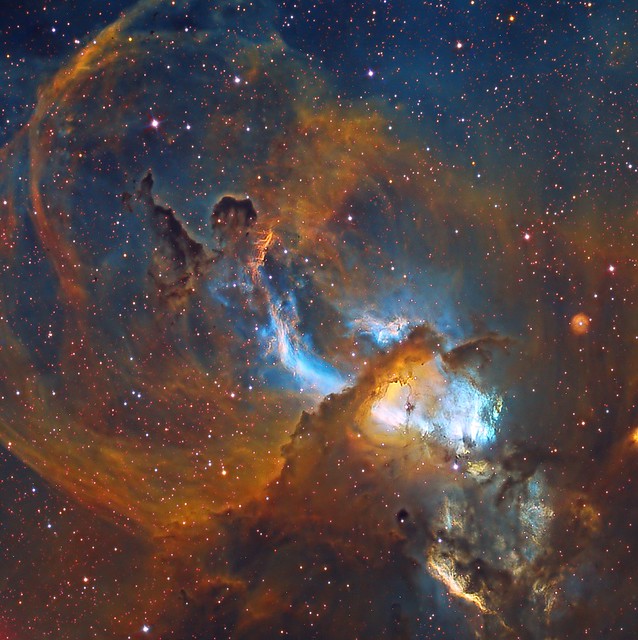 Dr Paolo Candy - www.hesnet.net/candy
Ci.A.O. - Italy
You do not have the required permissions to view the files attached to this post.
Top

"Thanks to acceleration by intense sunlight," co-author and Boston University research scientist Carl Schmidt added in the same statement, "the sodium tail takes on a different shape than the tail seen in off-band filtered images, which are dominated by reflected light from dust. In comparison, the sodium tail is narrower, longer and points directly away from the sun."

Sunlight's push on sodium atoms tends to be stronger than its effect on dust and other gases that come off comets. It is difficult to see sodium tails, however, due to the sun's emissions. Notable examples of comets with sodium tails include Hale-Bopp (the famed 1997 naked eye-comet) and the notorious Comet ISON, which fell apart shortly after rounding the sun in 2013.

Morgenthaler and Schmidt will continue to observe NEOWISE as it rounds the sun. They are also using Monte Carlo computer models to simulate the sodium tail and estimate outgassing rates and speeds.

It was not revealed in the statement exactly when the team plans to submit their results to a journal for peer review, but it is common when observing quickly changing astronomical phenomena like NEOWISE to release interim information to keep the community informed.

------
https://www2.jpl.nasa.gov/comet/candy22.html (picture on Hale-Bopp in sodium filter)
You do not have the required permissions to view the files attached to this post.
Last edited by astromazzo on Sat Jul 25, 2020 2:14 pm, edited 3 times in total.
Top 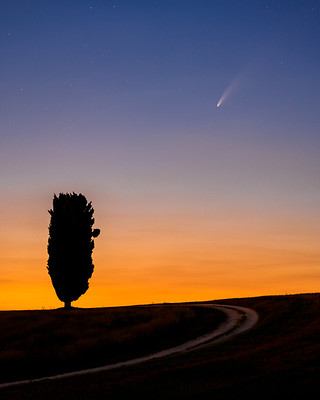 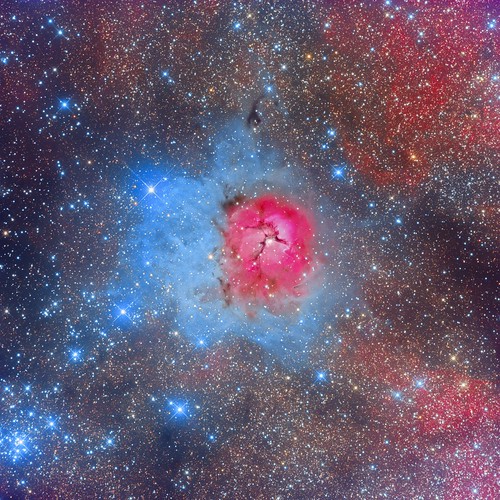 M 20 Lrgb from T2 of Chilescope and old works in Arizona by gc.iaffaldano, su Flickr
Top

The ISS passed through during my 10:08pm exposure. 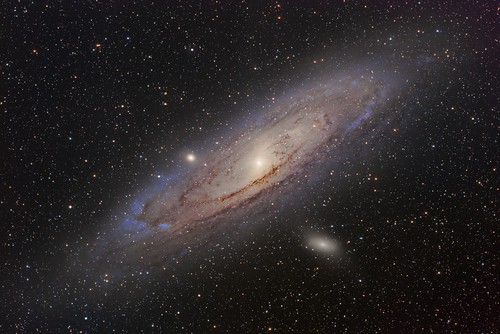 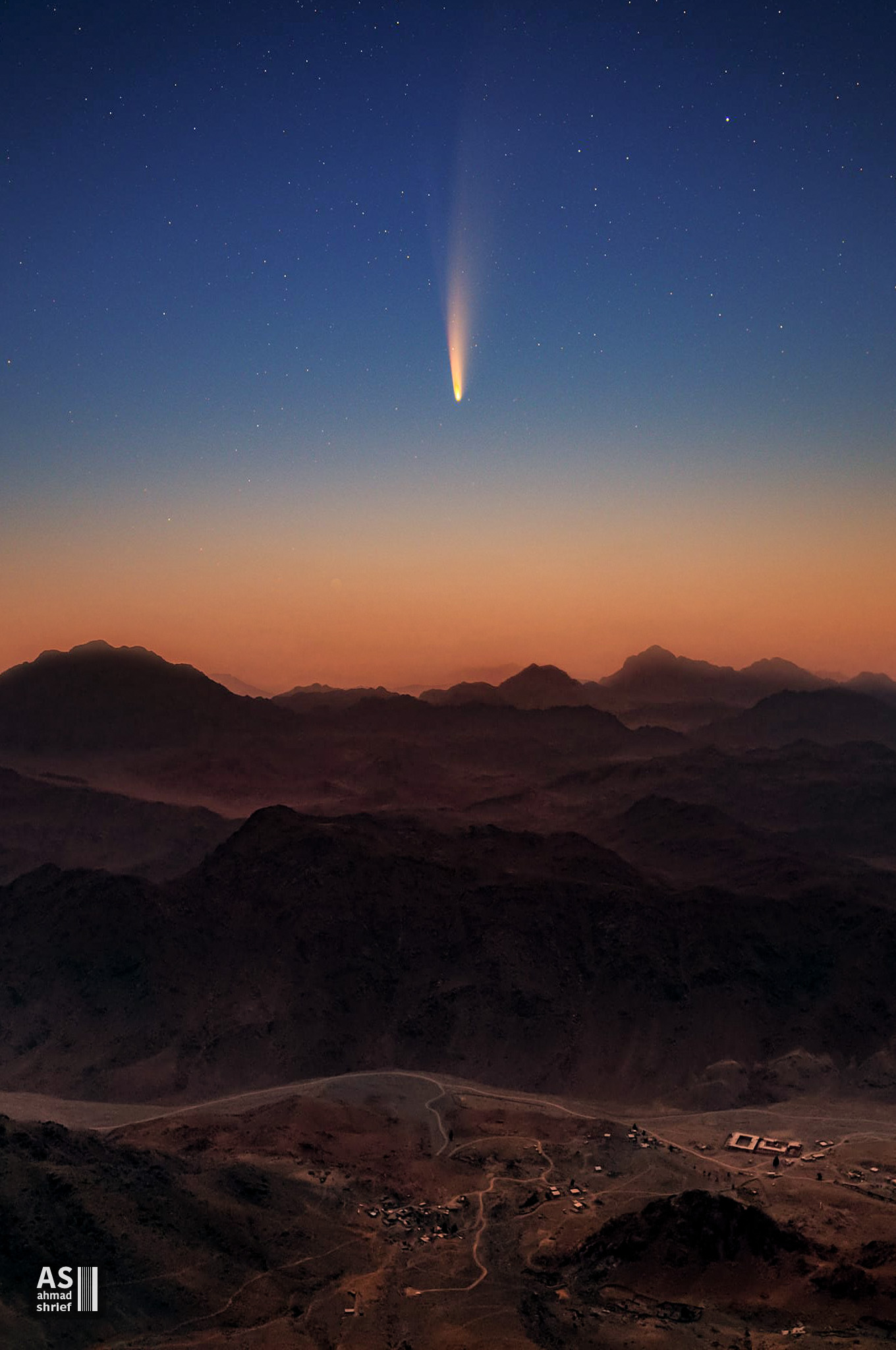 such a great pictures people congrats!

I am going to share one found in flickr, the author it is pretty nice, due the pic is published as CC. 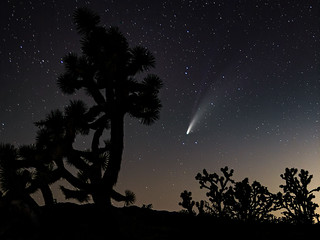 By the way, I would love to do similar pics, but checking the cams you guys posted and this one, looks super expensive, any cheaper solution?

I was looking at some Kodak cameras, and by photo and reviews looks pretty good. However, it is triggering my attention that looks pretty cheap compering with Canon and Sony cameras, as you can see on this list of prices any idea?
Top 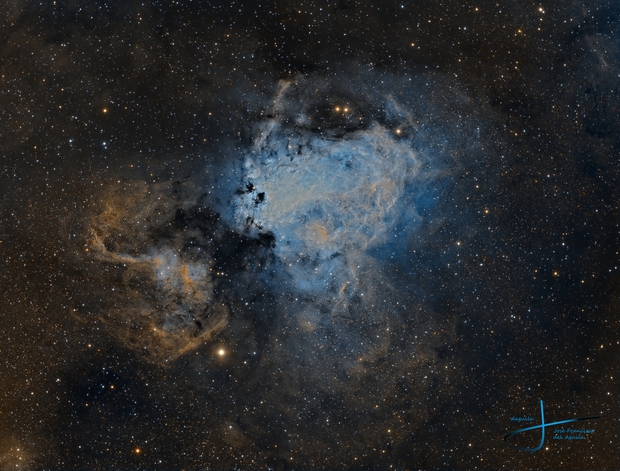 A crop from a previous image: The Elephant Trunk Nebula

Elephant Trunk - Signed (1200 x 800).jpg
Full info @ https://www.kinchastro.com/ic-1396-with ... ebula.html
You do not have the required permissions to view the files attached to this post.
Top 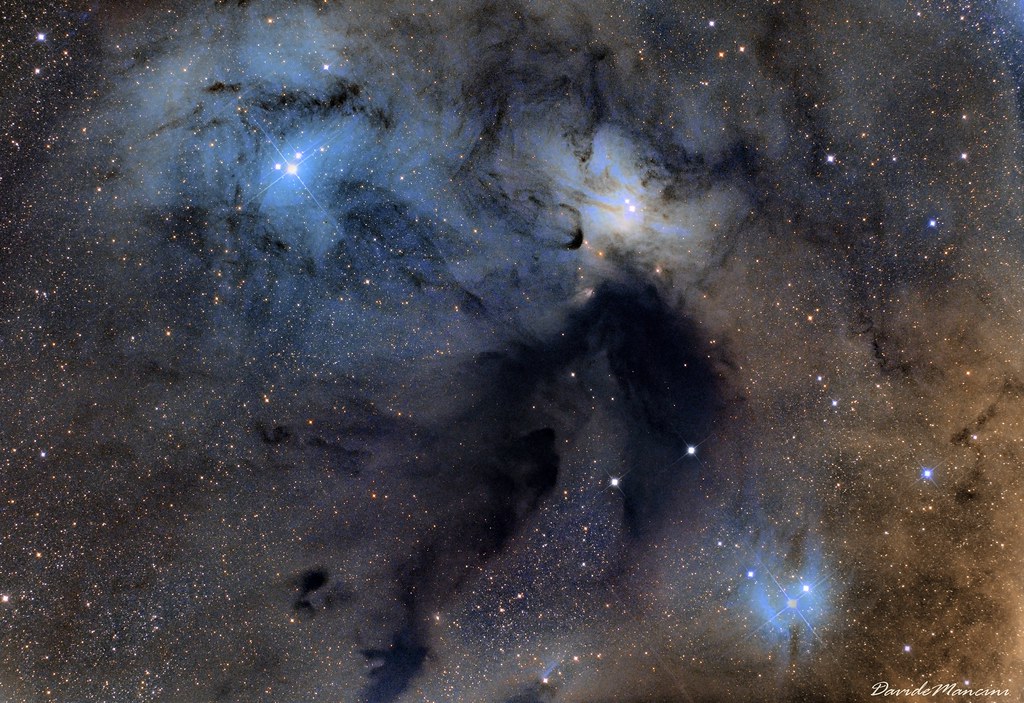 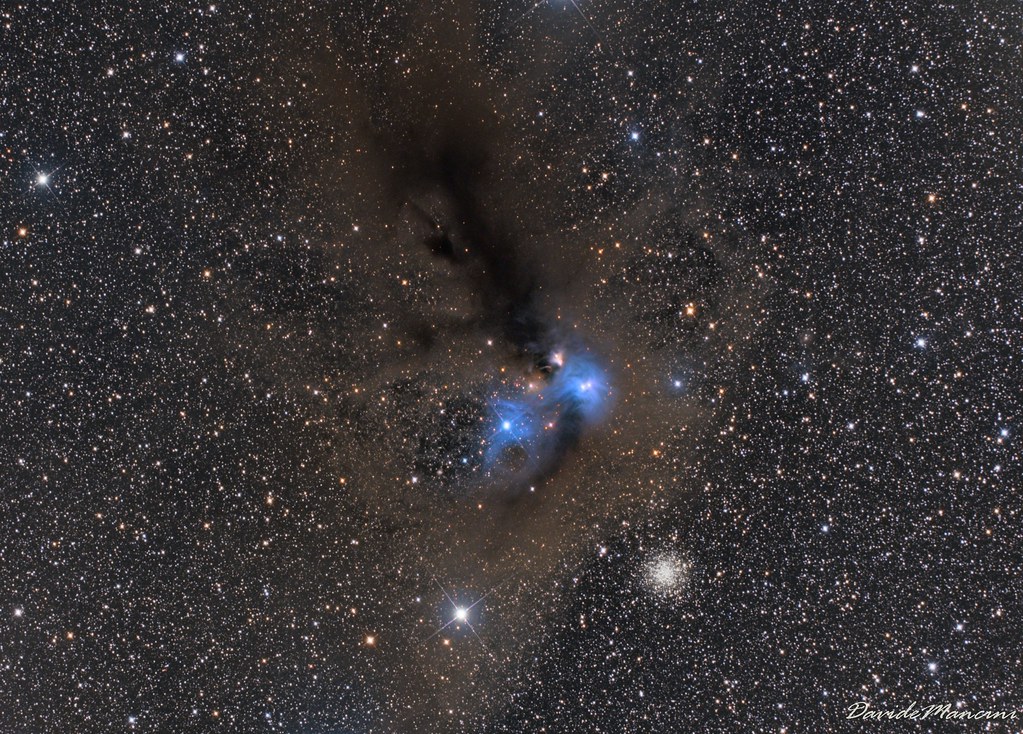 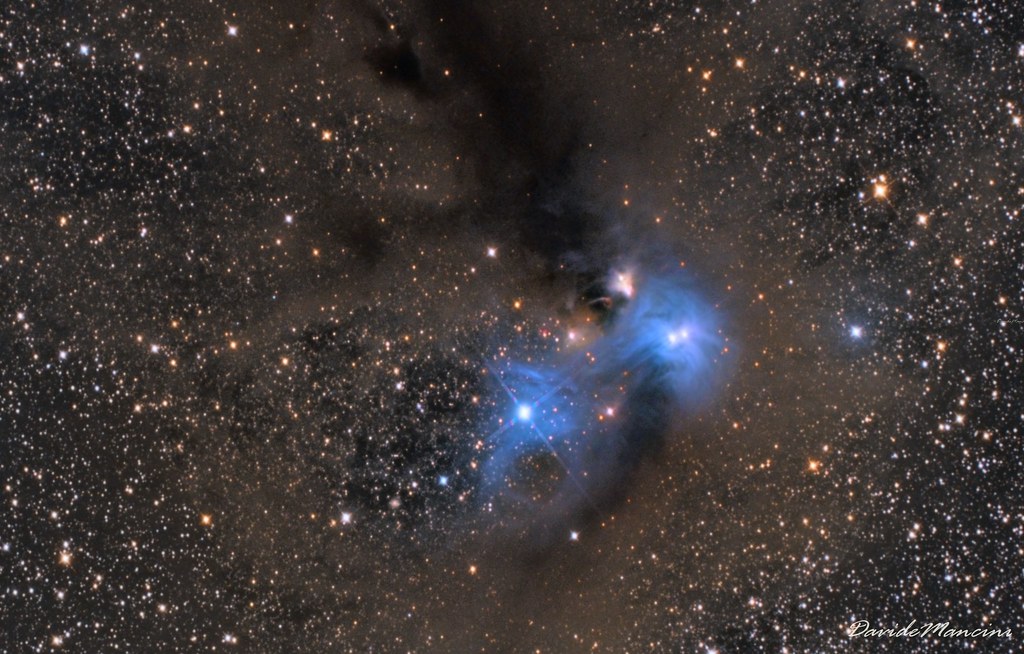 Comet NEOWISE and the Big Dipper
Copyright: Alson Wong
You do not have the required permissions to view the files attached to this post.
Top
244 posts