Jones-Emberson 1 (PK 164+31.1) is a planetary nebula in the constellation Lynx at a distance of 1600 light years. It is a larger planetary with low surface brightness. The 16.8-magnitude central star is a very blue white dwarf.

Jones Emberson 1 (Sign) 1500x1000 (300DPI).jpg
Click on above to enlarge.
Full details @ https://www.kinchastro.com/jones-emberson-1-2021.html
You do not have the required permissions to view the files attached to this post.
Top

van den Bergh 14 and 15 are a pair of reflection nebula located in Camelopardalis, close to Sh2-202 (which is edging into the right hand side of the frame). vdB 15 (to the south) has an interesting pinkish/yellow component to it - it provides a real challenge in getting both the colour and saturation correct. Additionally, a very rich star field complements the field but makes it hard to prevent it overwhelming the nebulae.

By adding H-Alpha data into the mix, it enhances the regions of hydrogen emission that encroach on and faintly pervade the area: not far away to the west are the Heart and Soul - it's a very busy area of sky.

There is a tiny (almost stellar in nature at this scale!) planetary nebula, catalogued as Kohoutek 3-64, to the left of the frame, that shines like a small pink beacon in the light of H-alpha. 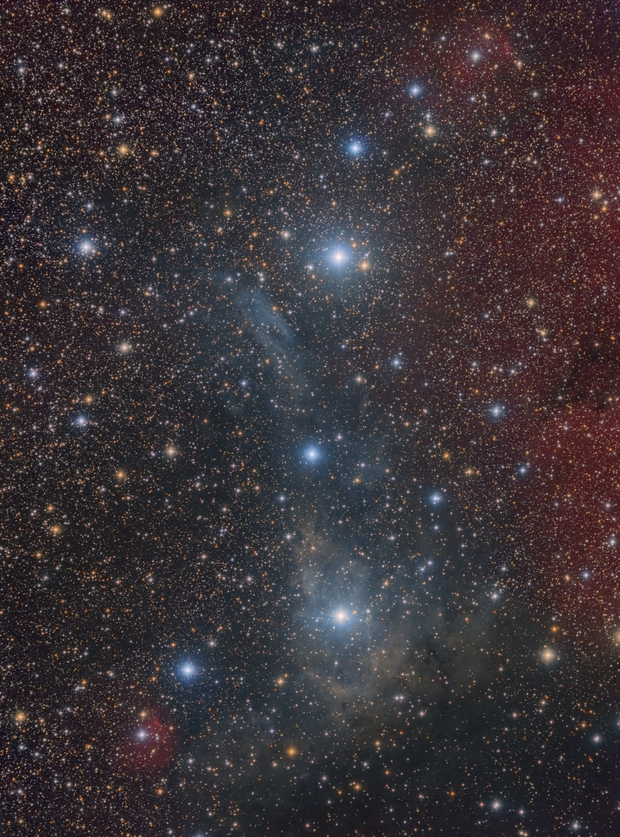 PLEASE see the full resolution by choosing "original" under the image at my site - the images posted here a heavily downscaled! 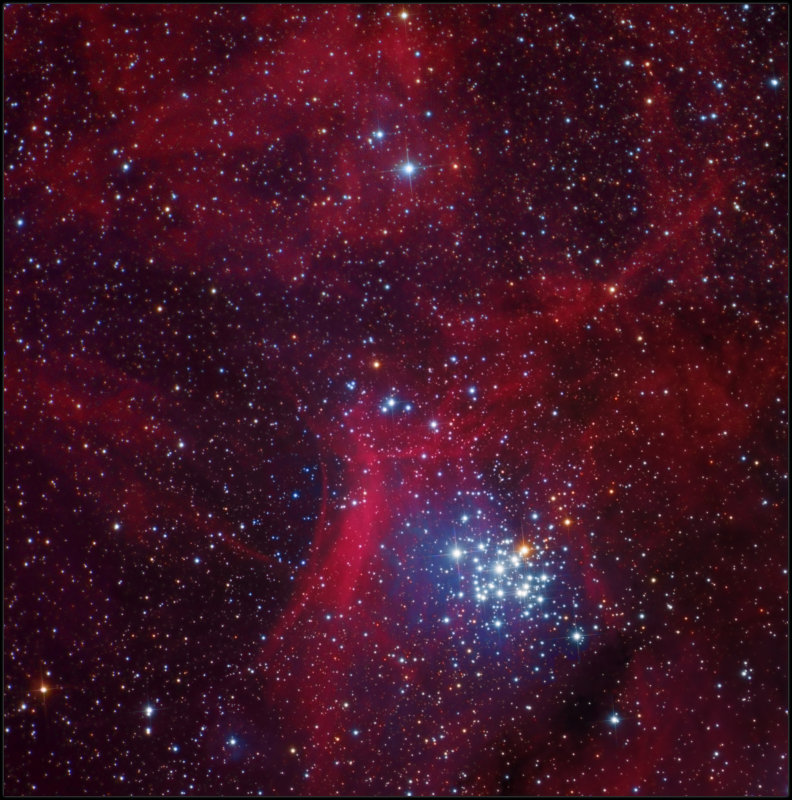 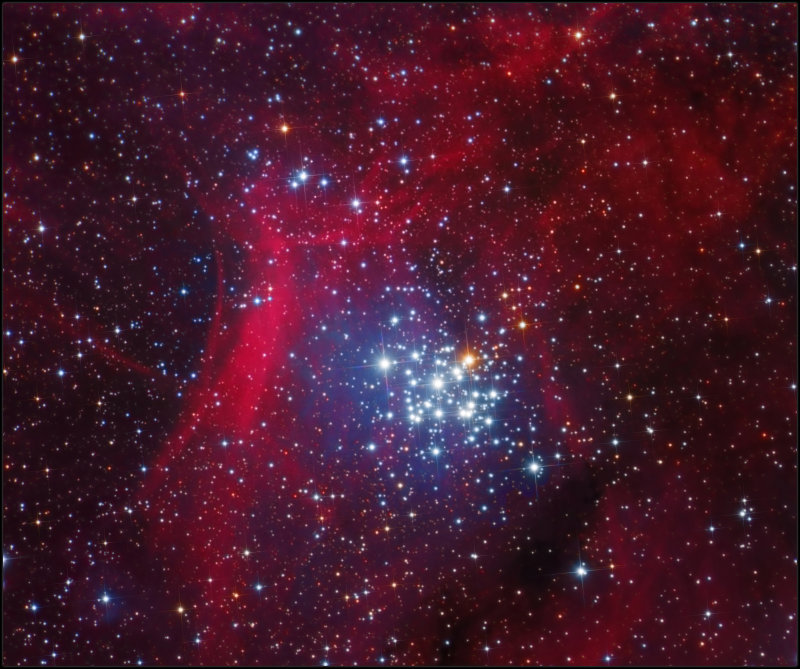 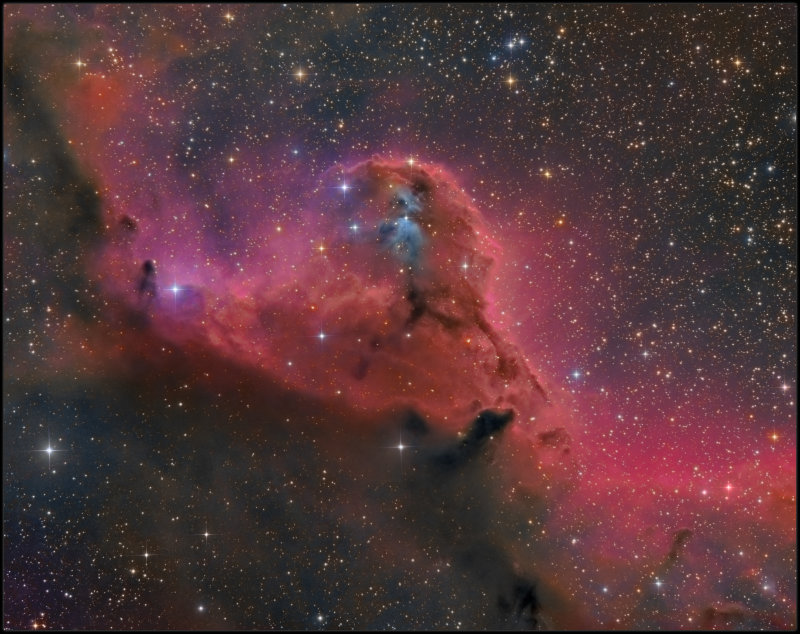 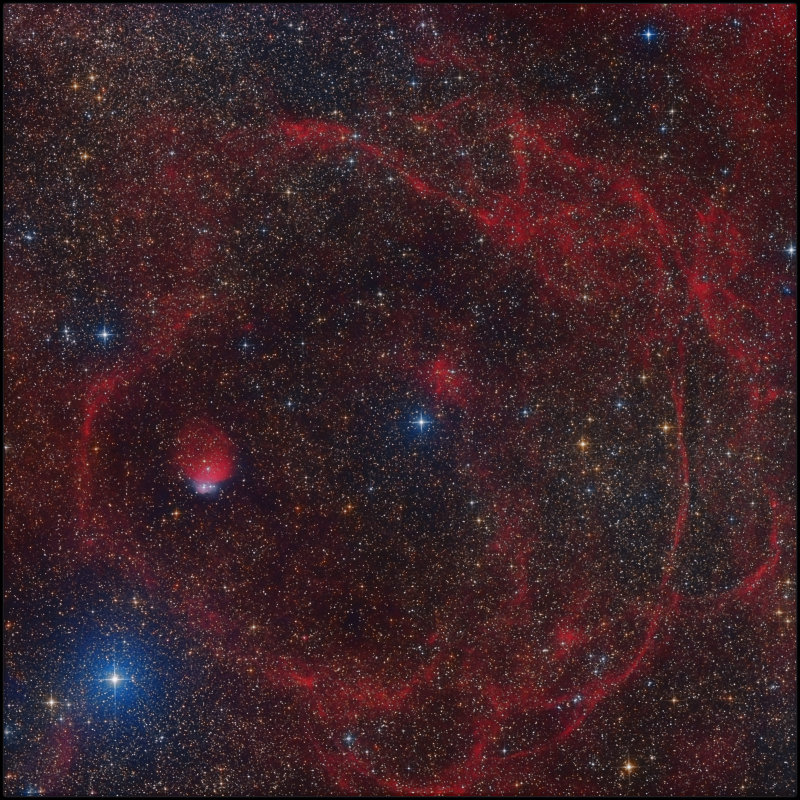 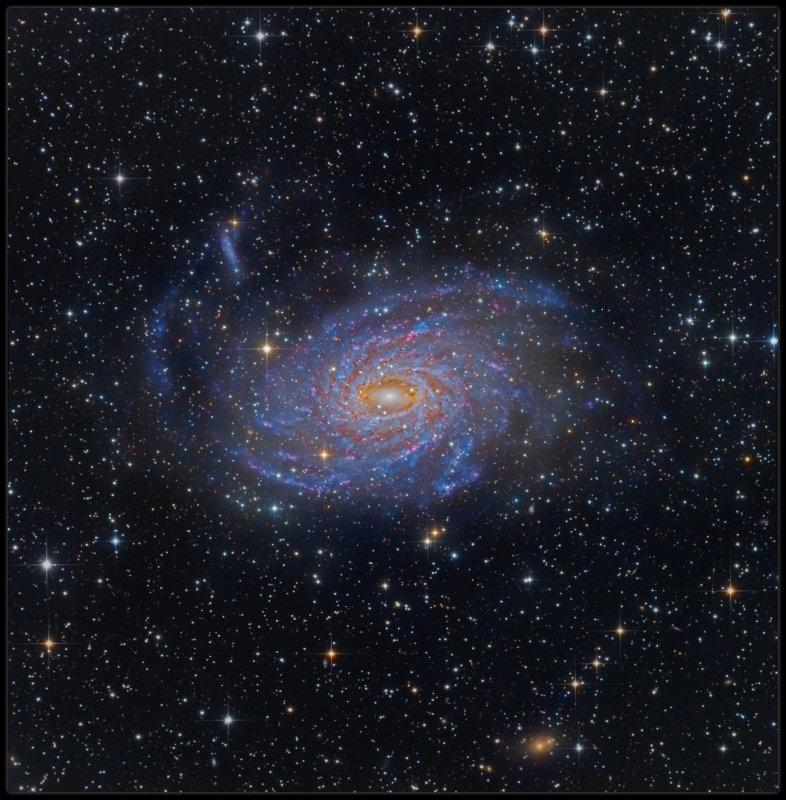 SH2-308 A cosmic bubble being blown in Canis Major

Sitting in a rich field of OIII and Halpha emission nebulae, a remarkable and beautiful, striated, teal coloured, almost perfectly spherical, bubble, is being blown in the interstellar medium by the intense stellar wind from a very hot and massive Wolf-Rayet star at its centre. Wolf-Rayet stars have surface temperatures of between 30 000K and 210 000 K, compared to our Sun, which has a surface temperature of just 5800K!

A larger image can be seen here: https://www.flickr.com/photos/strongman ... ateposted/ (click on image to enlarge and pan around with your cursor) 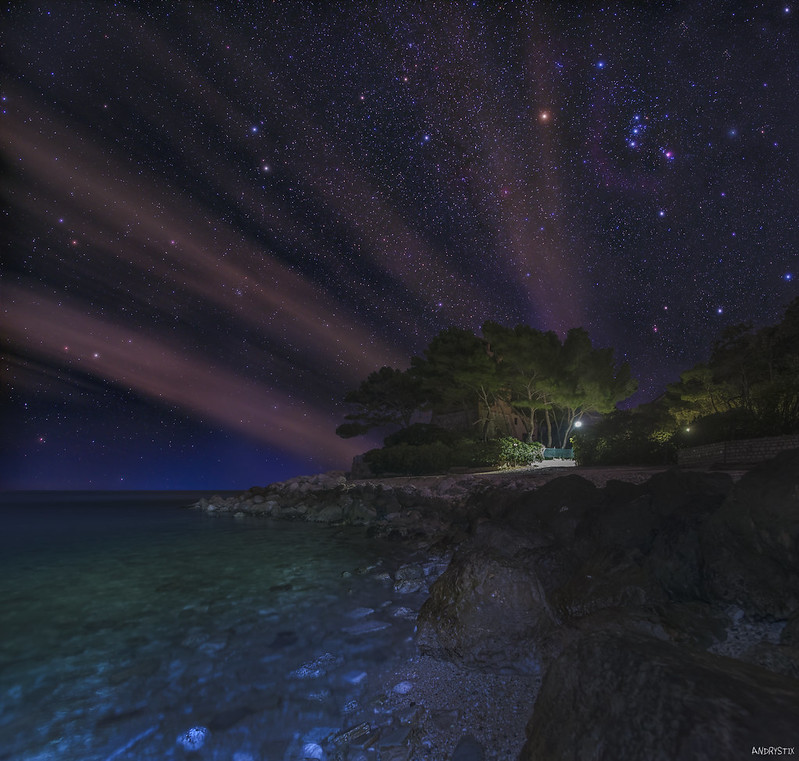 The meeting: Orion, Scorpius and Rukapillan

Pano-Orion-Scorpius-Rukapillan-volcano.jpg
Story: It is well known that the constellations of Orion and Scorpion mark the beginning and end of the seasons in the year.
In fact, in Greek mythology it is said that the goddess Gea created a giant scorpion to chase the hunter Orion, and thus protect the animals and humans of the Earth , but that in a fatal encounter, where both were already dying, the gods decided to commemorate the Scorpion by putting him in the sky, and Orion not to leave him in oblivion but if by way of torture, the Scorpion would pursue him eternally, so then never we see both contelations together in the night sky.
Except in certain latitudes (Here is latitude 39°S) at certain times, with enough opening to the East and West, we can appreciate these 2 giants, and thus also have this panoramic view of 3 arms of the Milky Way: Orion, Carina and Sagittarius.
It was also a night of company with the most active volcano in Chile, the Rukapillan (Villarrica volcano) and this chemamull (sacred mapuche sculpture) at its feet.

Social:
http://www.instagram.com/cariletelier_foto
http://www.cariletelier.com
You do not have the required permissions to view the files attached to this post.
Top

HOO Orion HDR
My first attempt at an HDR Composite. 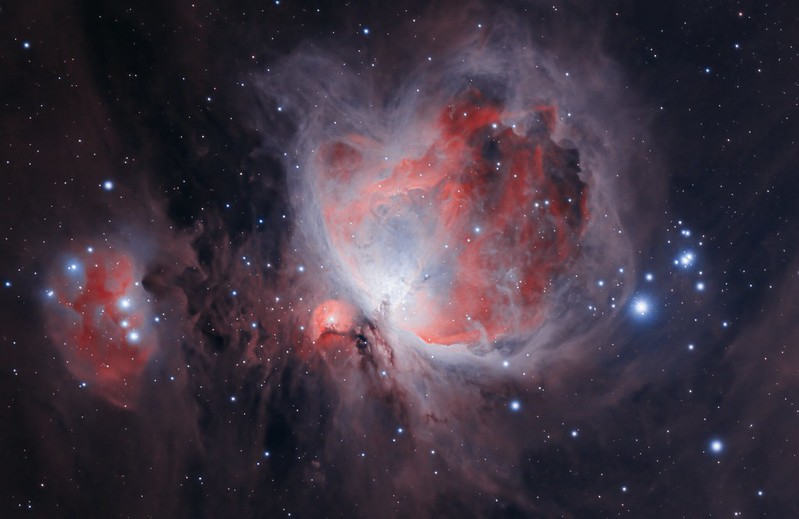 I photographed this a week ago, when there was only one cloudless night after 2 months... 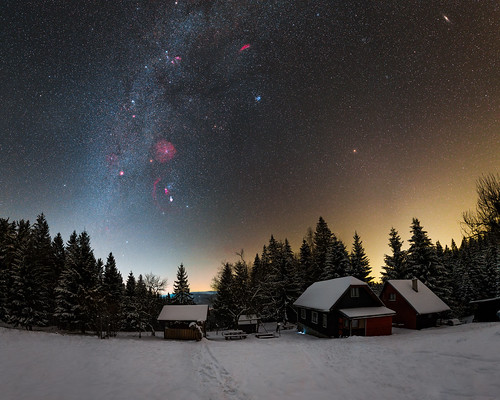 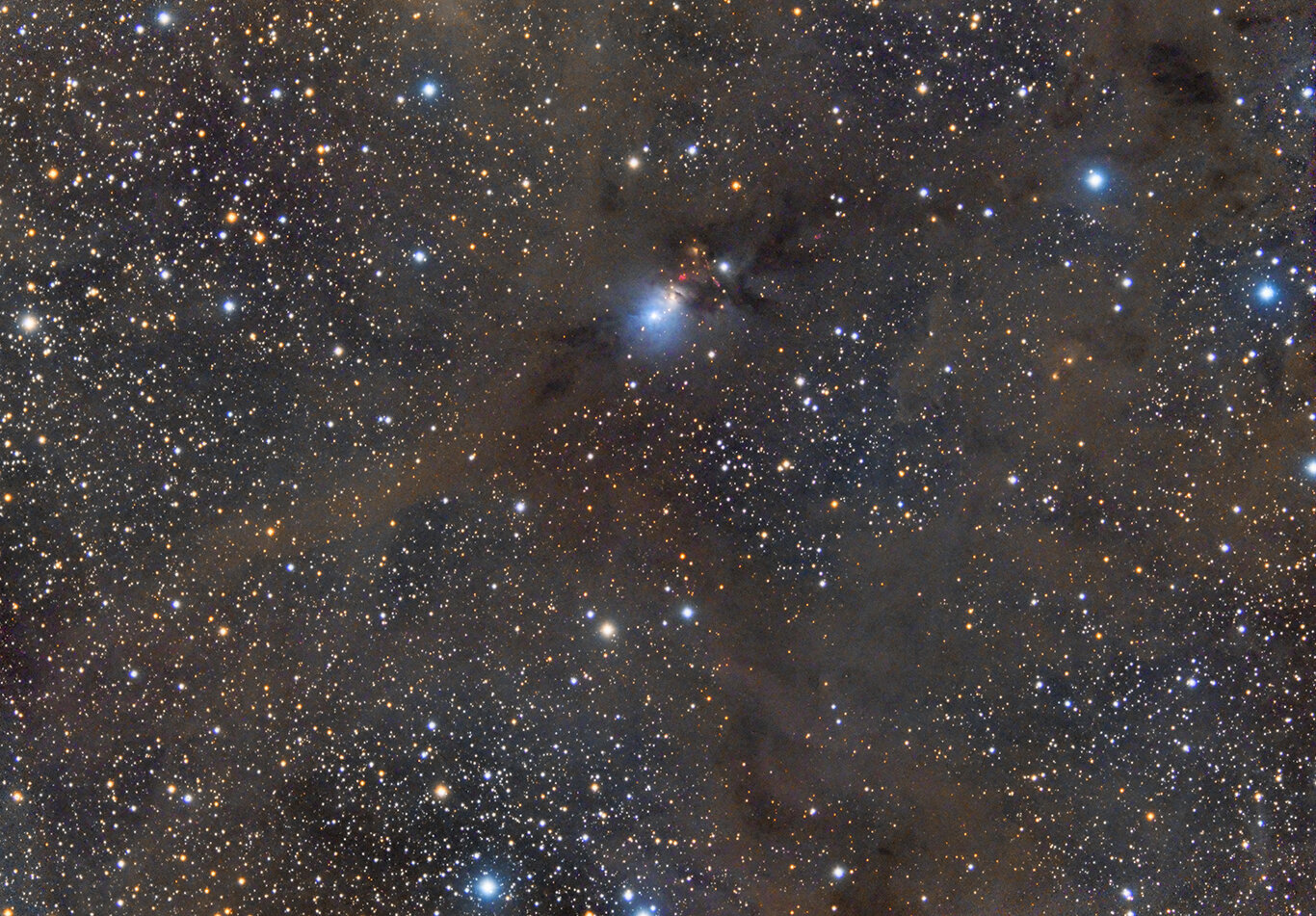 Hello,
Attached is my comparison of the Sun's size during the Perihelion and Aphelion stages, both were shot in the HA wavelength.

Image acquisition and processing:
I shot two videos, both at 500 frames each.

I ran both videos through AutoStakerrt3! and stacked the 100 best frames for each. I loaded each file into ImPPG and processed them to my liking. I then loaded them up into Photoshop to blend the two images together. Finally loaded them into Lightroom to add the watermark and some minor adjustments.

You have my permission to use this wherever you want.

If selected please link to this:
https://www.instagram.com/bryangoffphoto/
You do not have the required permissions to view the files attached to this post.
Top 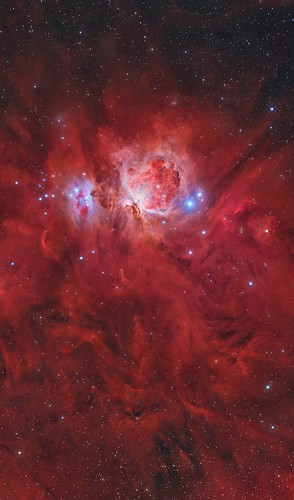 This project was born with the idea of ​​creating a wide-ranging mosaic of the sword and Orion's belt, the first 3 of 49 panels with four hours of integration for each panel, a job that will require about fifty nights over two years, I wanted to present the first three panels as a wish for the success of my astrophotographic project.
The great Orion nebula is fascinating for its color and quantity of poor interstellars, imagining its distance and seeing the light of 1400 years ago always leaves me speechless.
Shots taken in Valgrana,Cuneo, Italy
Setup: Sw 80 ED heq5 ZWO ASI 533 MC pro.
panel 1: 80x180 sec 21 flat 21 bias 40 dark
panel 2: 80x180 sec - (HDR core M42 5X120 5X60 5X30 5X10
SEC. ) 21 FLAT 21 BIAS 40 dark
panel 3: 80x180 sec 21 flat 21 bias 40 dark
Pixinsight processing. Photoshop.
full resolution: https://i.ibb.co/DM8jpHL/Final-View.png
Credit: Federico Pellegrino
Top 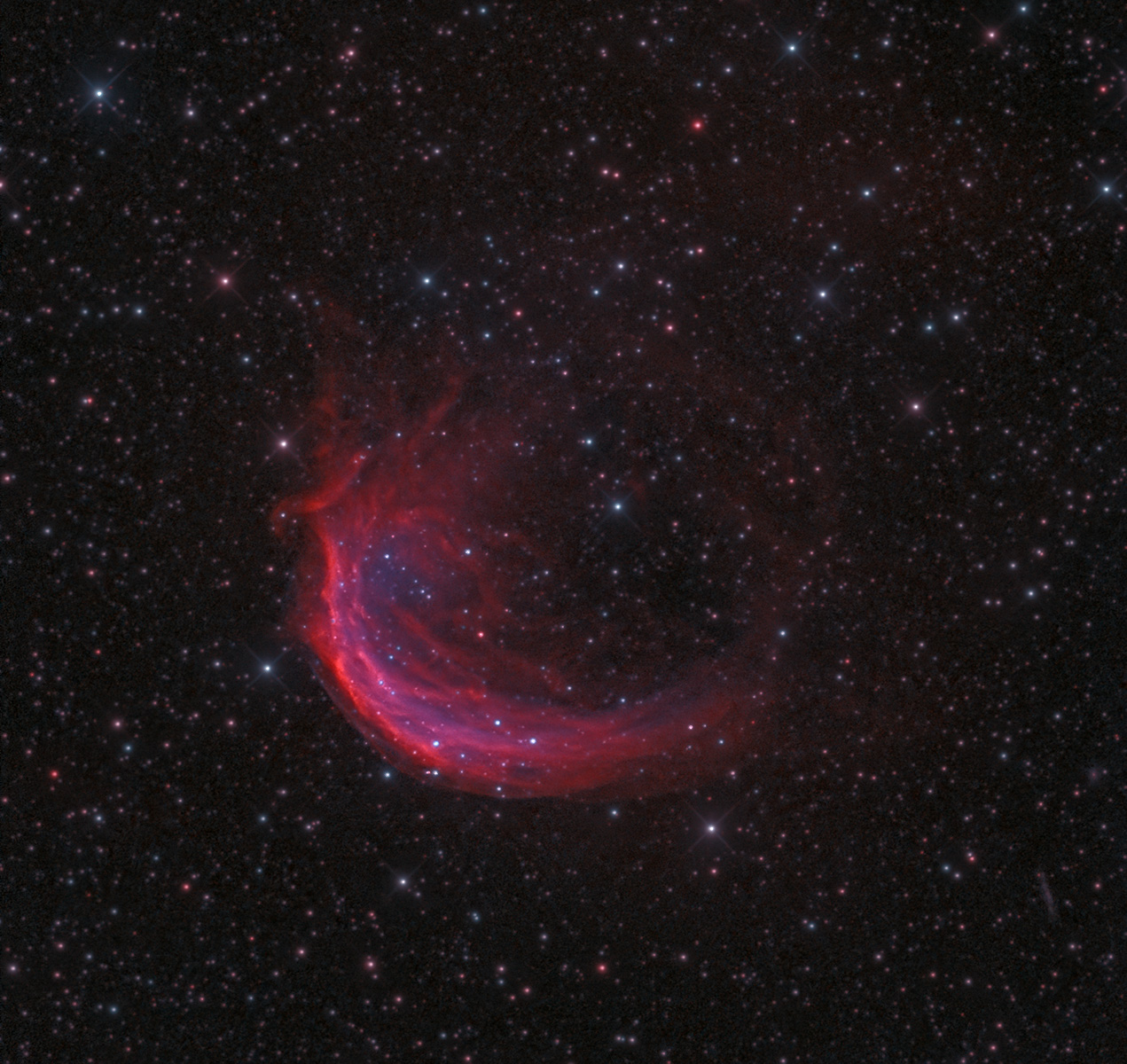 Good morning,
I would like to show how astrophotography has changed in the last 10-15 year, achieving results that were impossible even to think 15 years ago.
This is a my shot of the galaxy M82 (NGC3034). As you know M82 is an active galaxy about 12 millions of light years away form us. Previously identified as an irregular galaxy, the near-IR observations done in 2005 found two symmetric spiral arms.

The image was obtained with 30 hours of LRGB exposure plus 100 hours in Hydrogen alpha 3 nanometers to identify better the regions with hydrogen filaments. A careful deconvolution process also on the H-alpha channel permitted to achieve deep fine details.

I wanted to compare my image with the image of the same M82 galaxy but taken by the Hubble Telescope. Of course the HST resolution is much, much higher but considering my telescope is a 180mm from the ground (250 meters above sea level in north of Italy), the result is very good and clearly shows how the new devices and image-processing can now obtain results previously impossible for an amateur astronomer. 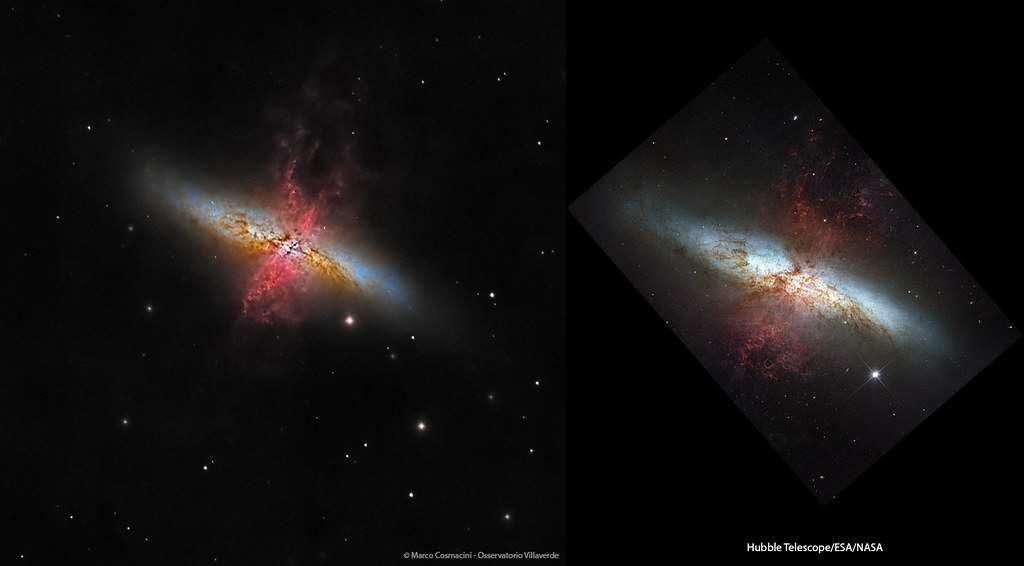 Full info @ https://www.kinchastro.com/sh2-115.html
You do not have the required permissions to view the files attached to this post.
Top

Caph Star
https://flic.kr/p/ZBDyXu
Copyright: Jaspal Chadha
Caph.jpg
You do not have the required permissions to view the files attached to this post.
Top

Heckathorn-Fesen-Gull 1 (HFG1, PK136+05) is a very old (~100,000 year old) and extremely faint planetary nebula in the constellation Cassiopeia. It was discovered in deep OIII images by Heckathorn, Fesen, and Gull in 1982 using the emission line survey of Parker et al (1979). The central star is a binary variable pair V664 Cas (13.7 magnitude). HFG1 is the first well observed PN, which reveals a cometary-like structure. As HFG1 moves through the interstellar medium and V664 ejects material, a bluish bow shock is formed and a red long trail of emissions is left in its wake.

HFG1_resample_AB.jpg
Copyright: Luca Marinelli 2021
You do not have the required permissions to view the files attached to this post.
Top


Located in the Grus Constellation, are all 4 spiral galaxies.
Further up we have NGC 7552, the smallest of the three below is ngc 7590, with its mate next to ngc 7599. The most central and most studied of them is NGC 7582.
NGC 7582 is a type 2 Seyfert galaxy, such a classification is due to the fact that the galaxy has an extremely bright supermassive central black hole very similar to a quasar (most energetic objects in the universe). The black hole of NGC7582 is about 10 million times the mass of our sun. 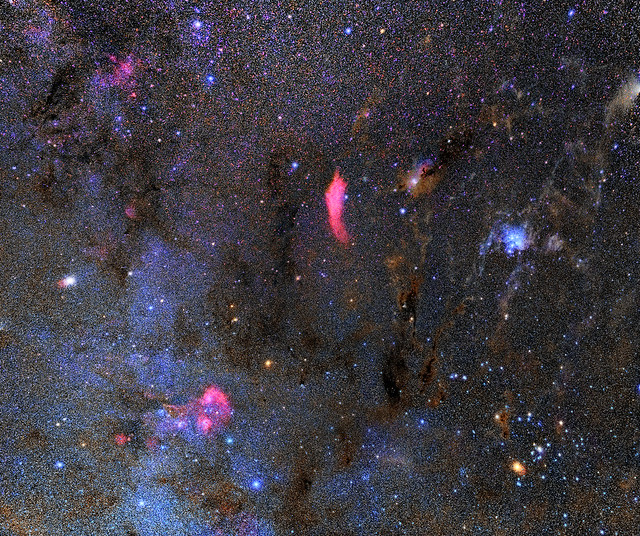 HaRGB Composition of the Horsehead and Flame nebula.

Capturing large panorama shots like this one are a lot of fun to showcase just how stunning the night sky is from our National Parks. I set out to capture the highest resolution panorama ever captured from Craters of the Moon National Monument in Idaho and I think I achieved that feat with this 77 panel image. The original image was so large it contained over 1 billion individual pixels. If you ever get the chance to explore Southern Idaho I highly recommend the trip. (Modified Nikon Z6 10 second exposures ISO 10,000 at F1.4).
Top

SNAKE NEBULA, THE BLACK SNAKE IN THE SPACE

Dark nebulae are a show apart, some visible with the naked eye in places with low light pollution, these regions are a type of interstellar cloud so dense that it obscures the starlight in the background.
Dark clouds appear like this due to micrometric dust particles, coated with carbon monoxide and frozen nitrogen, which effectively blocks the passage of light at visible wavelengths.
THESE DUST MOLECULAR CLOUDS PROBABLY CONTAIN SUFFICIENT RAW MATERIALS TO FORM HUNDREDS OF THOUSANDS OF STARS

You do not have the required permissions to view the files attached to this post.
Top
115 posts