The Spaghetti Nebula and the Star Alnath 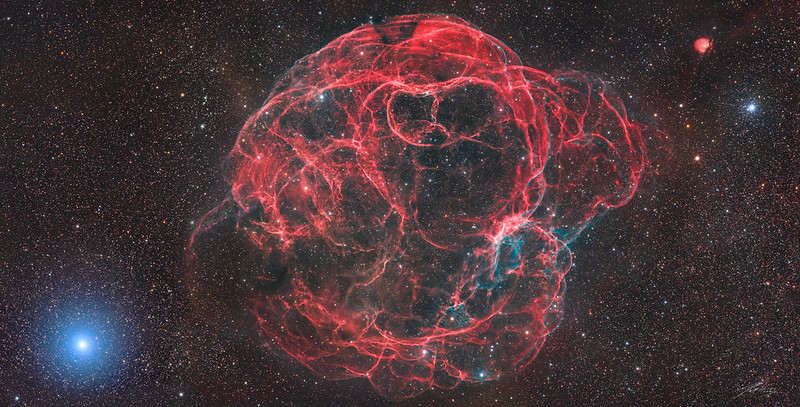 The Star Alnath (or Elnath), prominent in the bottom left, is the point of the right horn of the constellation Taurus and also a part of the Auriga Constellation. It is one of only two known stars to reside as principle stars in there respective constellations. Technically a binary star, Alnath is a mercury-manganese star with large signatures of other elements present. It is the 27th brightest star in our night sky and is 700 times the luminosity of our Sun.

Also known as Simeis 147, The Spaghetti Nebula is a beautiful mixture of colors highlighting the expanding shockwave of material ejected from this stellar explosion. This leftover supernova remnant occupies the space between Taurus and Auriga and spans 3 degrees of the night sky. The nebula stands out against a velvety, jewel encrusted swath of sky that is just above the ecliptic reaching out far beyond our Galactic borders.

The Spaghetti Nebula & The Star Alnath
Sharpless 2-240/Simeis 147
Mosaic of 1.2 Panels to include Elnath
Captured from The Marathon Sky Park, Marathon Texas

ImNewHere wrote: ↑
Wed Apr 14, 2021 12:53 am
NGC 6729 (also known as Caldwell 68) is a reflection/emission nebula in the constellation Corona Australis. It was discovered by Johann Friedrich Julius Schmidt in 1861. This image also contain NGC 6726, NGC 6727, IC 4812, and the globular cluster NGC 6723. located to the upper left of IC 4812 and a planetary nebula shown as a red circle can also be seen in this image locate to the right of IC 4812. Part of the Corona Australis molecular complex is also shown in this image. 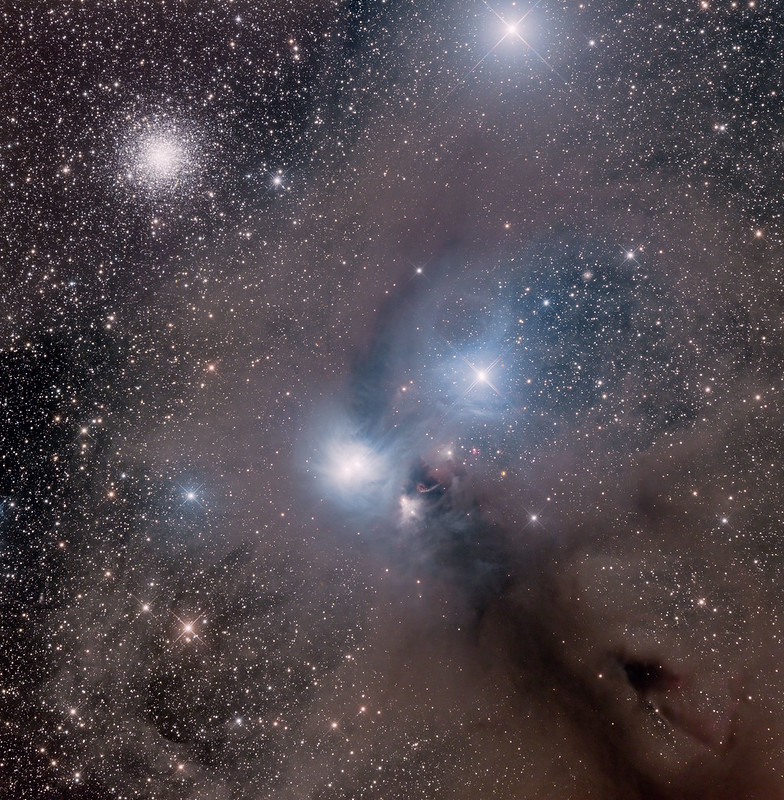 Fixed a slight defect in this one with this. 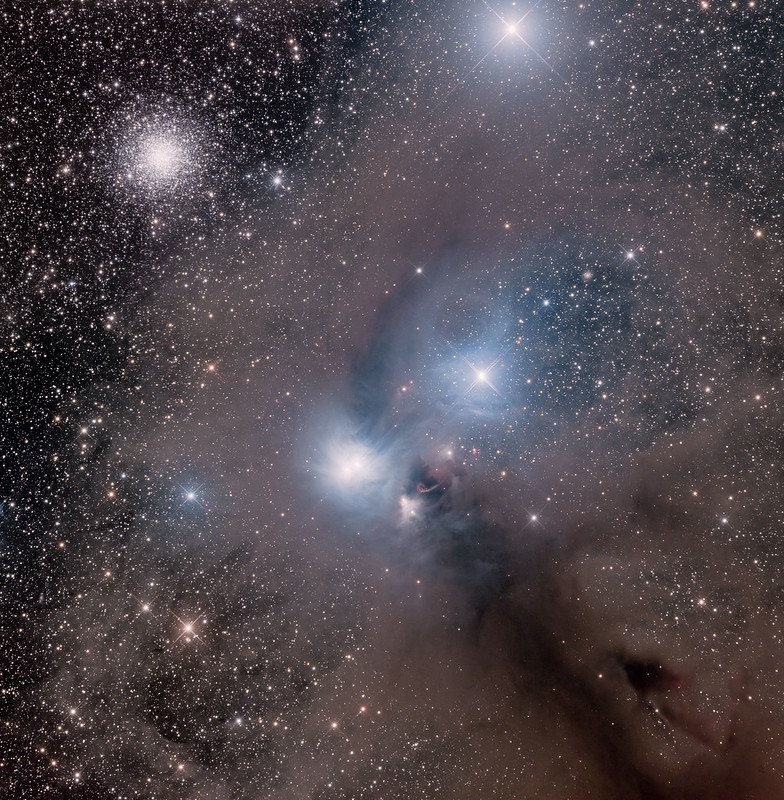 
It had been too long since you made the OP.
Know the quiet place within your heart and touch the rainbow of possibility; be
alive to the gentle breeze of communication, and please stop being such a jerk. — Garrison Keillor
Top

The Statue of Liberty Nebula

9,000 light years away is this spectacular scene. NGC 3576 - a statue rising out of dense clouds with filaments looping overhead shaped by powerful stellar winds. Next to it is NGC 3603 - a glowing cloud of gas, dust and stars some 11,000 light years further on, which at its center you can see a Wolf–Rayet multiple star system, known as HD 97950. 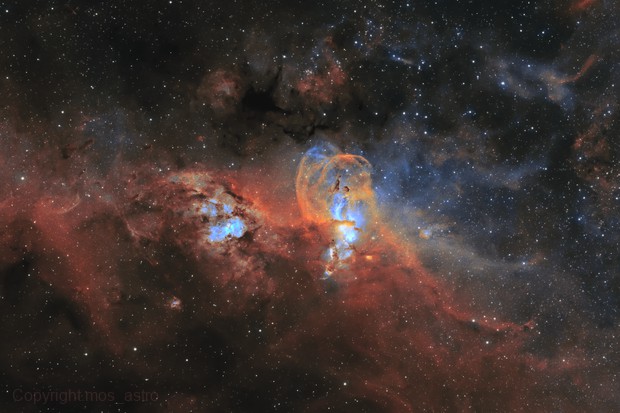 https://www.astrobin.com/x8gn7t/
You do not have the required permissions to view the files attached to this post.
Top

Nick Pavelchak
https://www.astrobin.com/7i1uau/
You do not have the required permissions to view the files attached to this post.
Top 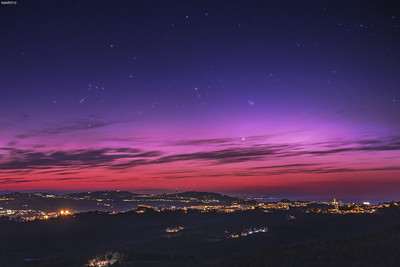 Ancona, Italy. 14th April 7.30 - 9.30 PM
I've taken this panorama on Wednesday during the evening.
The Orion Complex and the waxing Moon with a stunning sunset.
It was a tiny breath of fresh air, because of covid fault in Italy we're still forced to stay home.
The image is the result of 3 tracked frames for the sky (30 pictures for 15 min signal) plus other 3 frames untracked for the ground put together in PS.
Nikon D750 (modded), AF-S NIKKOR 70-200mm f/2.8G ED VR II, iOptron Skyguider Pro, Nisi Filter Soft ND4 (to reduce light pollution).
Sky 70mm, 30 seconds @ f/4, ISO 400
Ground 70mm, 30 seconds @ f/7.1, ISO 100
Social andrystix on Instagram, Facebook and Flickr (available in UHD).
Top 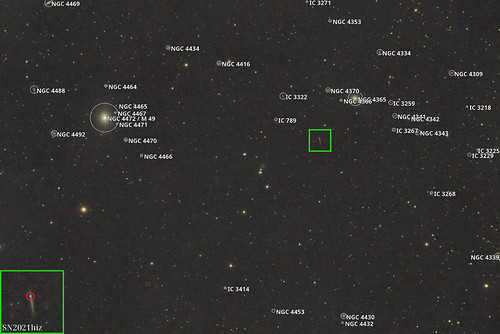 This time around it was the curfew that blocked me from shooting it myself. So, my partner in crime from California, Tara Mostofi, saved me once again, shooting the target on 16th of April. Supernovae are much more rare than novae and can outshine at their peak an entire galaxy. These events are extremely violent and... useful! The supernovae of class Ia all share the same brightness, which means they can be used as a ruler for the distances in the universe, a property which is impossible to underestimate. The galaxy in which this specific supernovae exploded is known as IC 3322A and is situated in a galaxy-rich region of the night sky - you can see how many of them have been detected by the tool I used for the annotation (though it "skipped" the most interesting one - the galaxy in which SN2021hiz supernovae exploded).

A favorite galaxy pair of mine, NGC 3169 and 3166. NGC 3169 has a very disrupted outer halo and several tidal tails due to gravitational interactions with NGC 3166.

Hi folks! First post here. I wanted to share with you what was an early image of Saturn, my first one of the year. Although we are still far away from the gas giants oppositions, on Tuesday 04/13 around 09:50 UTC incredible atmospheric conditions were seen for what are the usual skies of Buenos Aires, Argentina and luckily despite the relative low altitude of Saturn, it was reflected in the image. This one was the result of stacking several videos taken with a simple (14") Dobsonian telescope, a design created by the late John Dobson.

This year it's noticeable how Saturn appears less tipped, making the task of photographing the polar hexagon difficult. Too bad I didn't have enough time to take an IR capture to see it better, the clarity of dawn was gaining altitude (it was a race against the clock). I don't see any storms in sight but a few nice superficial details are present. Also, Dione and Tethys are lurking around Saturn.

More information can be found here: 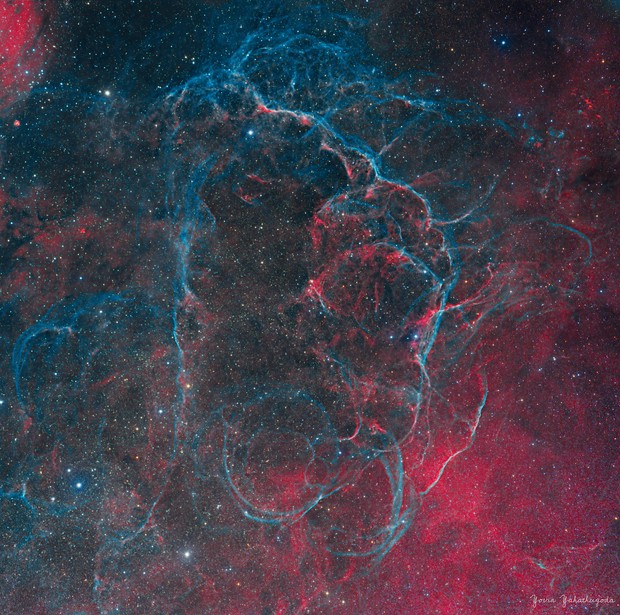 The image was processed by combining RGB data with narrowband data in the HOO palette. The SII data was used with Halpha and OIII to create a synthetic luminance layer. 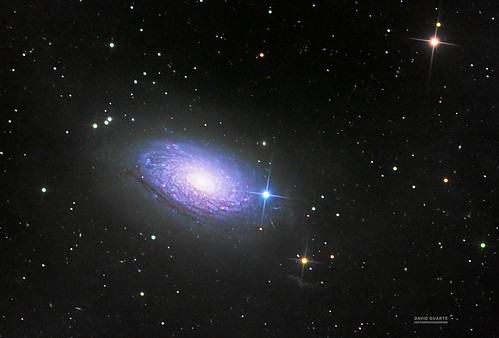 Messier 63 by David Duarte, sur Flickr
I captured this Galaxy over a period of 6 consecutive nights with a total of 12h30 of exposure, in my self-made observatory in south west of France Saint Paul Lès Dax.
This is the photo that required the most exposure time because I wanted to highlight the huge dust cloud that surrounds it.
https://www.facebook.com/davidduarteastrophotographie/

The Devourer of Worlds (Cometary Globule 4) 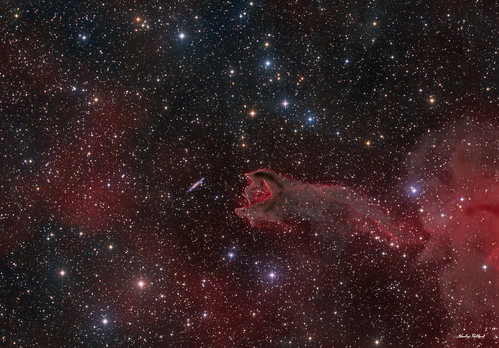 The Devourer of Worlds by Nicolas Rolland, sur Flickr

In spring there is a big competition with two colossal galaxy: M101 and M51. When you take a low focal range, we have access of all little NGC objects around M101. Some islands in this vast ocean. 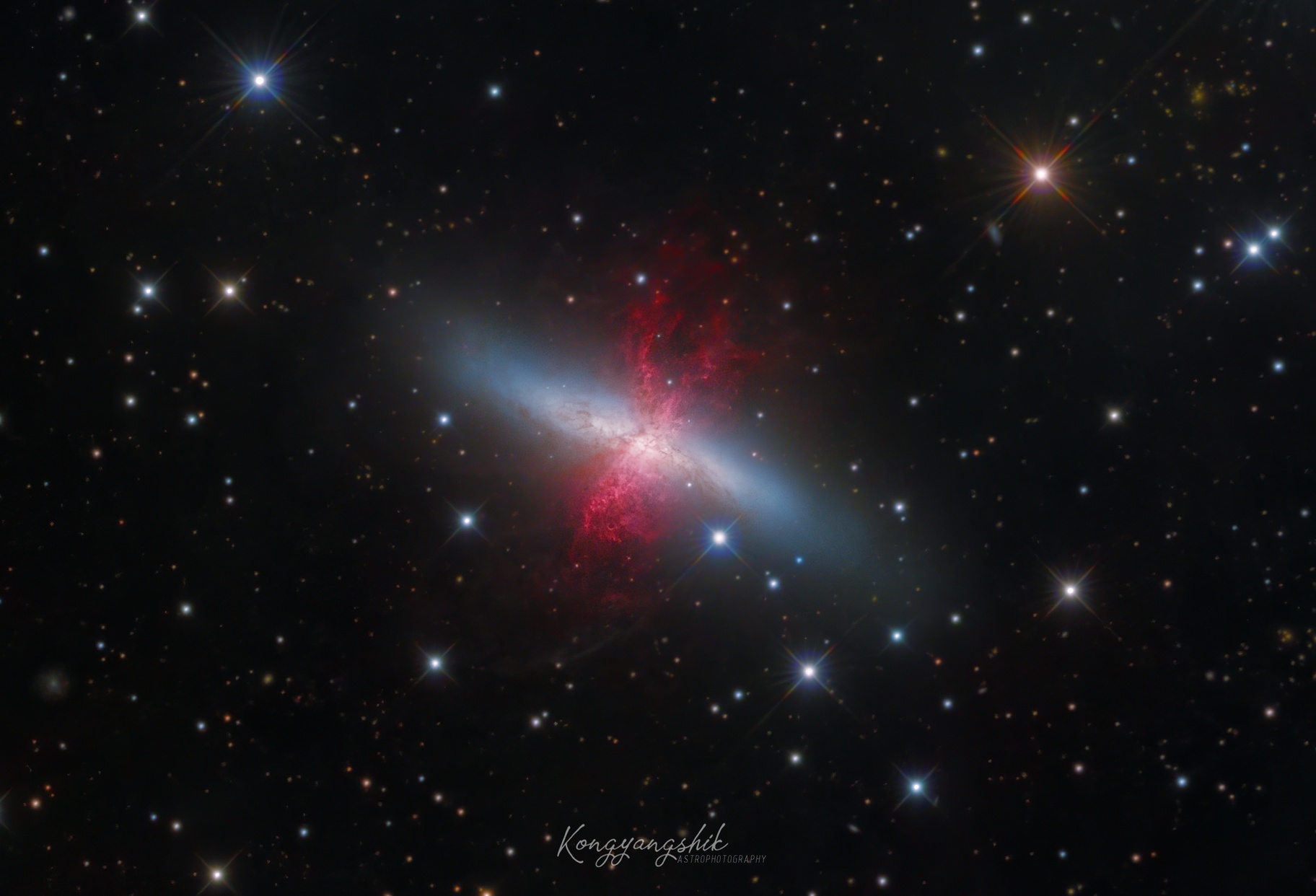 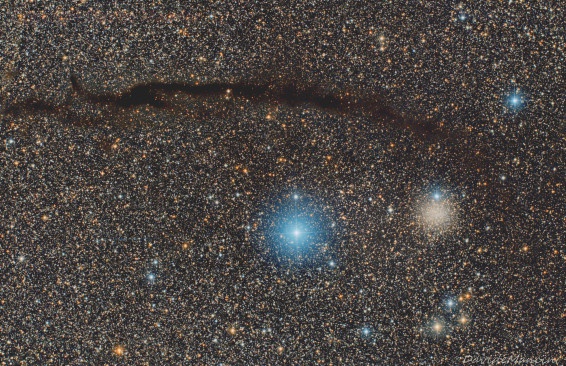 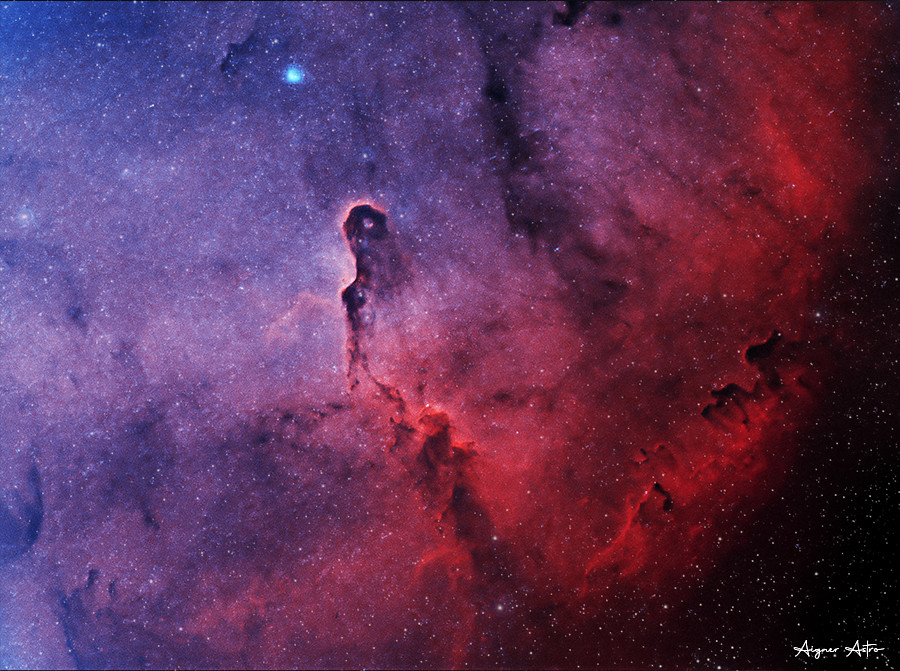 Combined in PixInsight with PixelMath 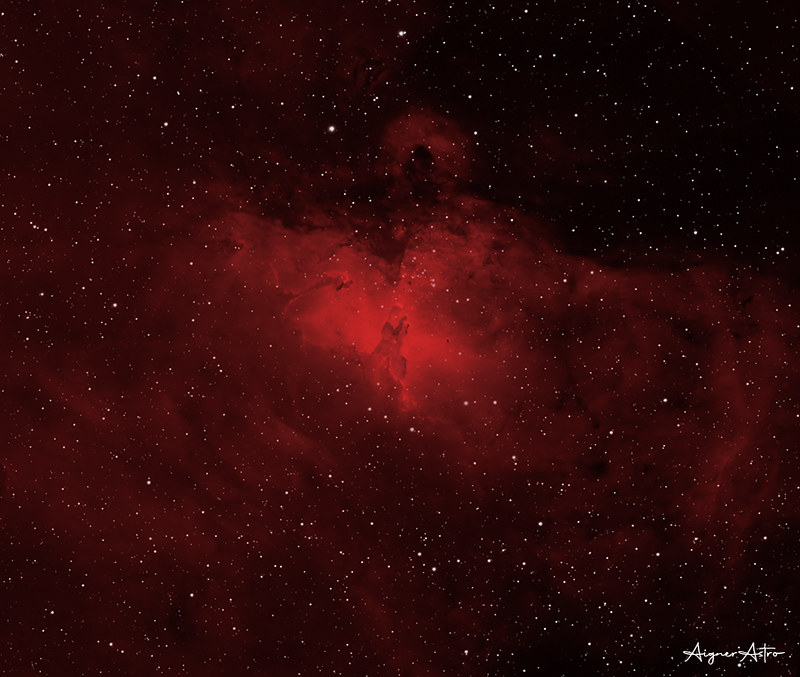 Colorized in PixInsight with PixelMath

~2 hours of integration shot from Churchville, PA in mid-April

Edit: fixed to link to 500k version of image. Apologies... 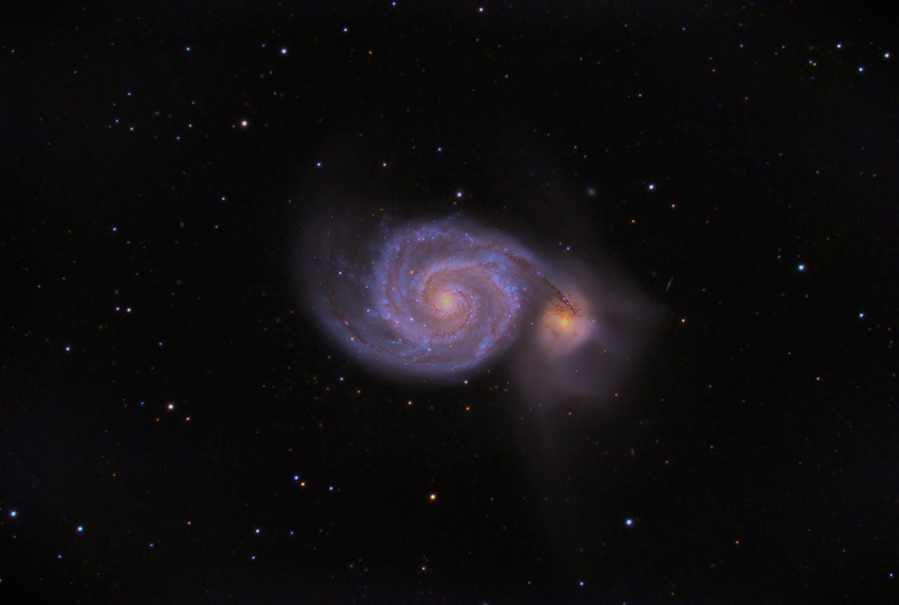 Details and full resolution image can be seen here: https://astrob.in/vgbv1c/0/
Thanks for looking!
Dave Doctor
You do not have the required permissions to view the files attached to this post.
Top