I just took this image of this pretty little planetary nebula, that I wanted to share. 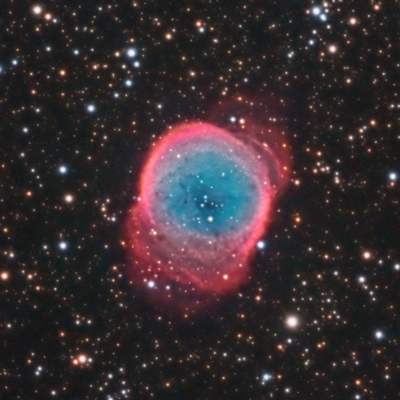 For larger and/or uncropped versions, and lots more information about the image, and the acquisition and processing of the data, click on this link:
http://www.de-regt.com/Astronomy/NGC6781.htm

I took this using my equipment at Sierra Remote Observatories in Auberry, California, USA. It contains 42.5 hours of light-frame data, gathered during September and October of this year.

Here are two lunar transits of the ISS near Copernicus, showing the two possible configurations of lighting:

instagram: parkesburg_observatory
You do not have the required permissions to view the files attached to this post.
Top

Rho Ophiuchi Cloud Complex
https://www.astrobin.com/nos0uv/
Copyright: Mohamed Usama Ismail / Ursamo Astrophotography
Traveling through the valleys of Saint Catherine at day and capturing the majestic Rho Ophiuchi cloud complex at night was my routine in the last few nights.
I was lucky getting few of them while capturing the beautiful bortle 1 night sky of Egypt. This image was shot using my beloved portable setup with no complications just a tracker, stock dslr, 135mm lens, and most importantly patience.
Location: Dar Eid - Saini - Egypt.
Date: August 11/12/13. 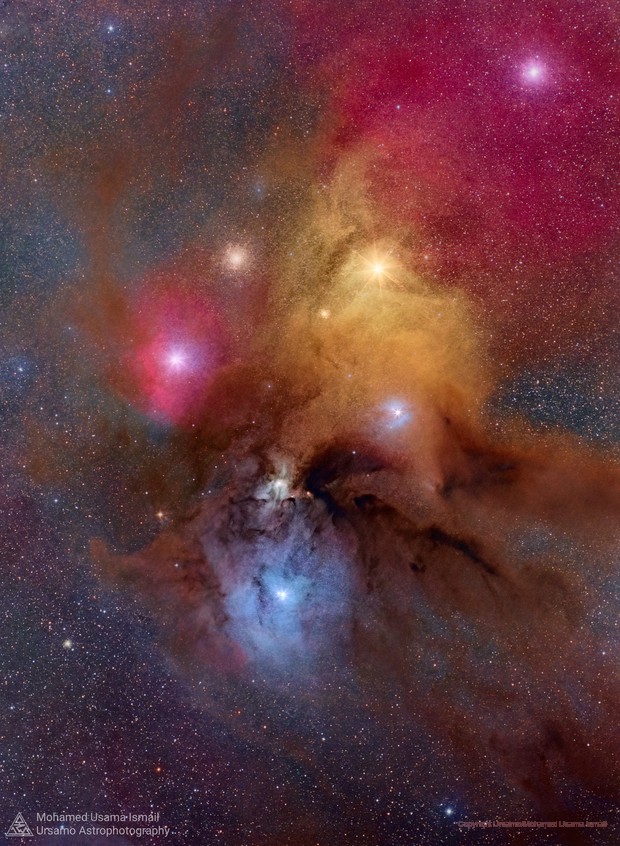 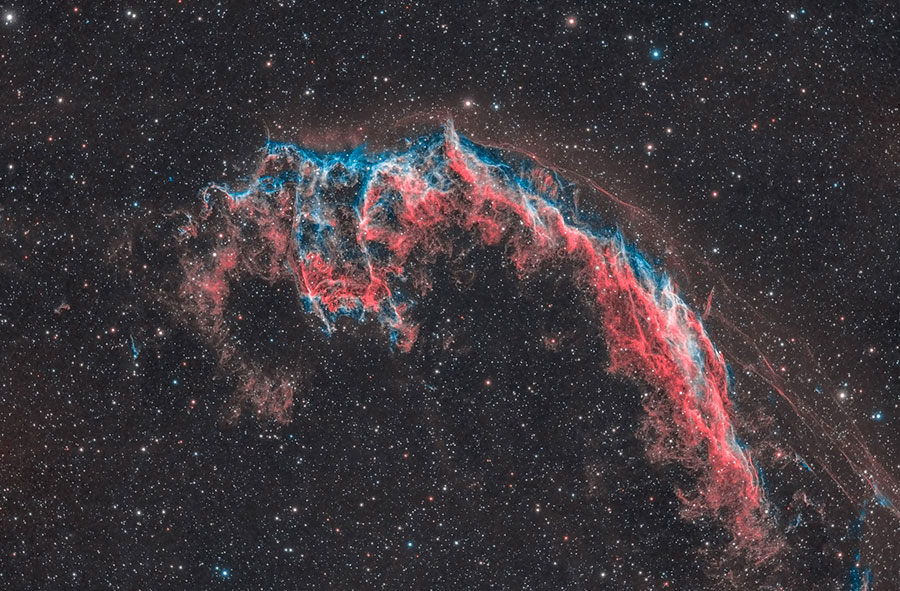 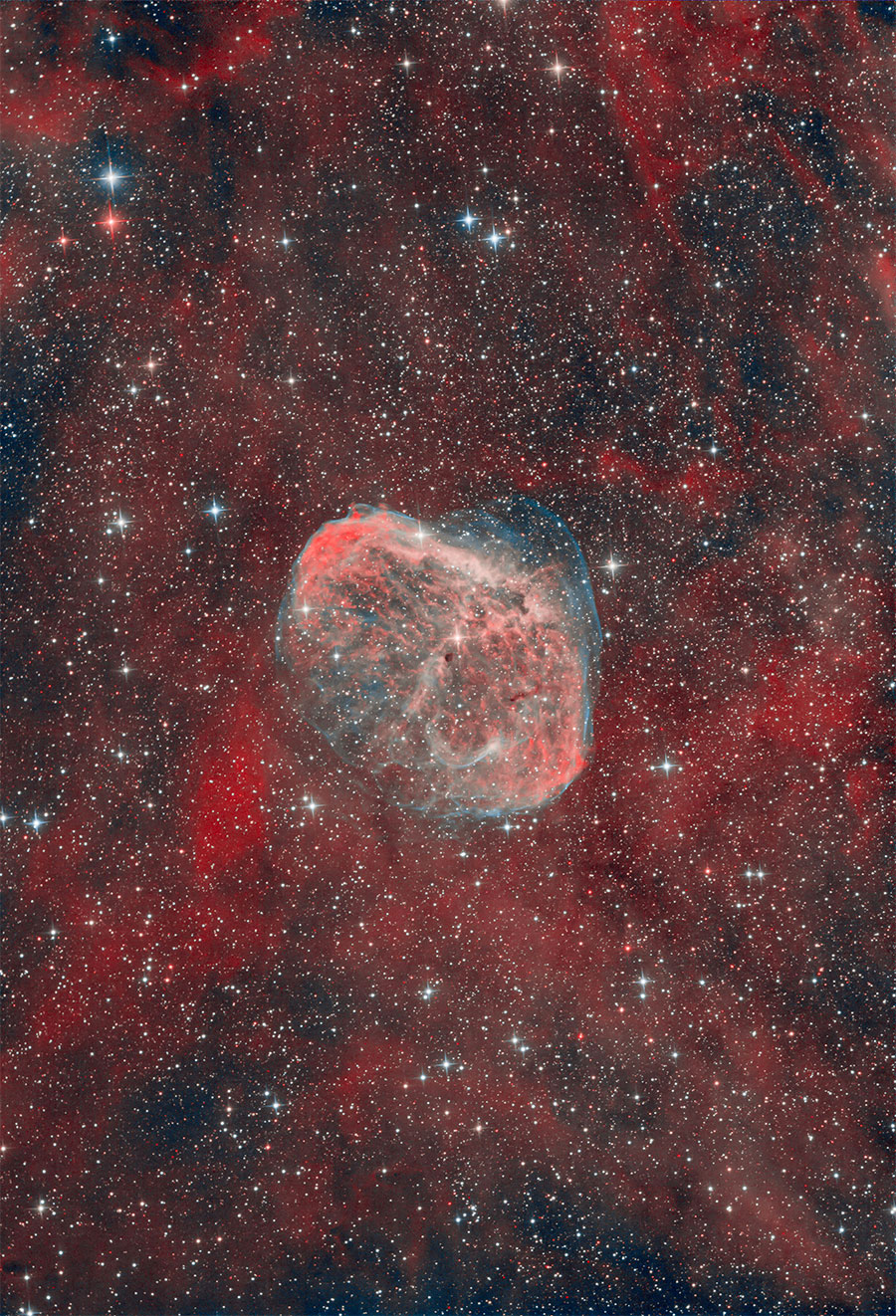 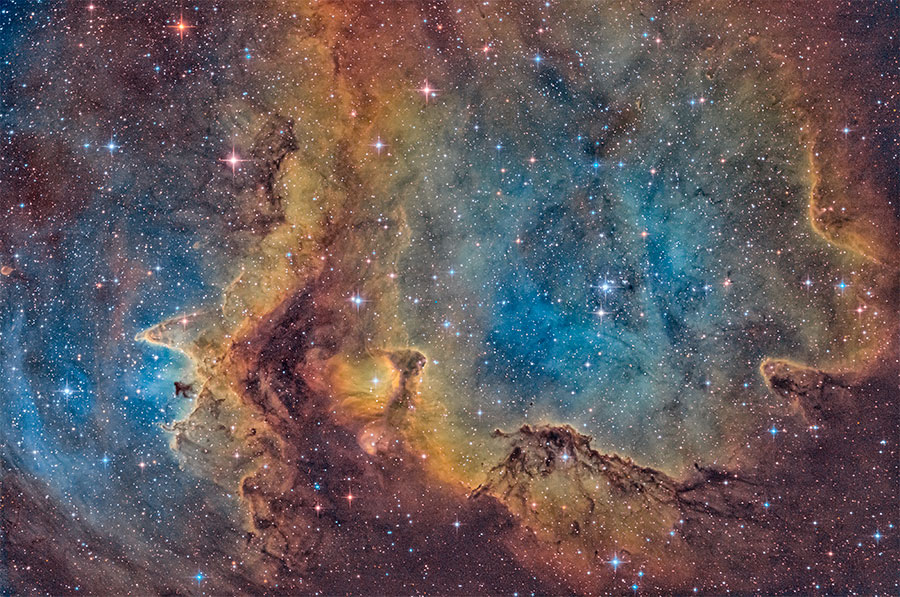 The Spider and Fly nebulae are situated in Auriga, at around 10 000 and 7000 ly away. They are emission nebulae.
This is a Hubble palette, the Oxygen is very weak and mostly present in the Spider nebula. The nebula is pretty faint, but due to the 24h of exposure I managed to emphasize the dark clouds in the background.

Full resolution and technical details : https://www.astrobin.com/full/tfpvx0/0/?mod=&real=
You do not have the required permissions to view the files attached to this post.
Top 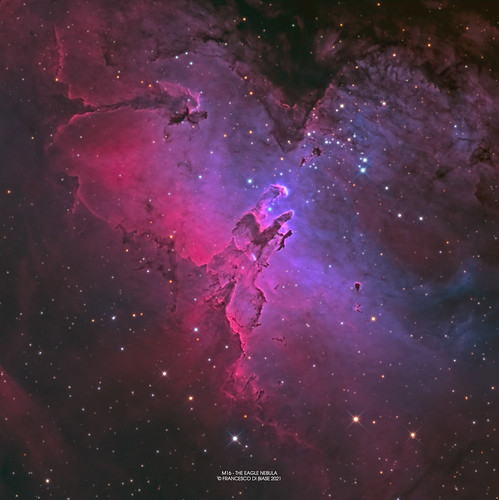 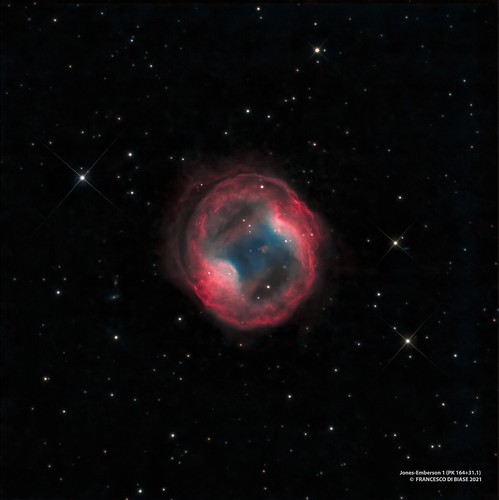 Barnard 3 Region
http://www.skymonsters.net
Copyright: Nicola Montecchiari
B3.jpg
You do not have the required permissions to view the files attached to this post.
Top

Simeis 57
This is a 2 panel mosaic of the Propeller Nebula and its surroundings captured using 5nm Ha SII & OIII filters on an SBIG ST10XME and TMB130 OTA.

NGC7000-5070-TommasoStellaWEB.jpg
You do not have the required permissions to view the files attached to this post.
Top

Hi , this evening , the Sun , with two sun spots , go down over the Teide crater. This is the moment and the image. Hope you like it.
Regards 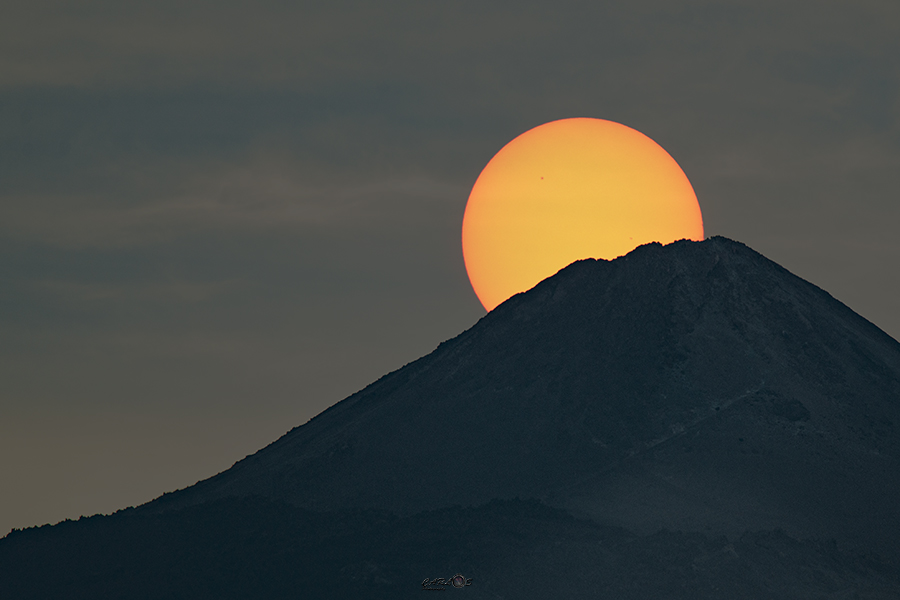 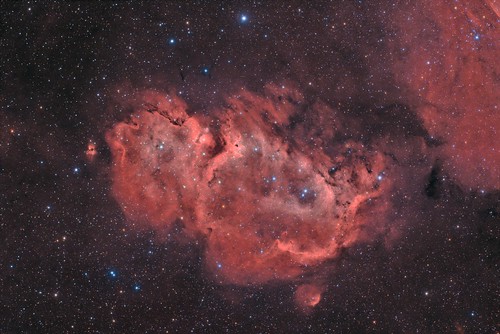 Early in the morning of November 1st, the ISS flew over Mont Saint Michel, during one of the last orbits for French astronaut Thomas Pesquet, originally from Normandy (the region in which Mont Saint Michel is located).
Thomas gets us used to regularly admiring the most beautiful landscapes on Earth from space. Mont Saint-Michel was not forgotten by the French astronaut during his 2 stays aboard the ISS: he flew over and photographed it several times.

For once, the places are reversed (between 2 original Norman photographers, moreover)

It was 6:13 a.m. when a very bright point emerged from the night, to move quickly without a noise above the Abbey, then "go down" towards the eastern horizon (on the right), where dawn was beginning. to dawn (hence the clearer sky with more pronounced bluish and magenta colors).

The trajectory of the ISS meets several points of interest in the sky: it appears at the level of the constellation Cassiopeia (the almost vertical "W") located in the Milky Way; then, it crosses the North Star at its highest position in the sky, before descending, brushing against the tail of the Big Dipper.
The crescent moon and the onset of day give the sky this characteristic bluish color. We were then at the very end of the "real" dark night: it is the astronomical dawn, more commonly known as "between dogs and wolves"!
This image, made up of 40 photos (forming a large panoramic), had been planned for over a month. Indeed, the passages of the space station are known and it is possible to know when and where to position to capture its crossing in the sky according to our position on Earth.

This image is unique : it is the first and only representation of the International Space Station above Mont Saint-Michel, with its transit almost complete and correctly oriented.

This image is also 100% real, the trajectory of the ISS and its position in the sky were planned thanks to Heavens Above - https://www.heavens-above.com (we can use it to check the date and time of the passage of the ISS if necessary). Mont Saint Michel faces south with its most famous side, through which we access it). RAW and captures from Heavens Above can be provided to check the picture if needed.
Precise acquisition hours : from 6:13 to 6:18 AM

I would like to submit my image of NGC7635 (Bubble Nebula). I have included a close-up as well, done in the same orientation and crop as the published Hubble image (a fun comparison). 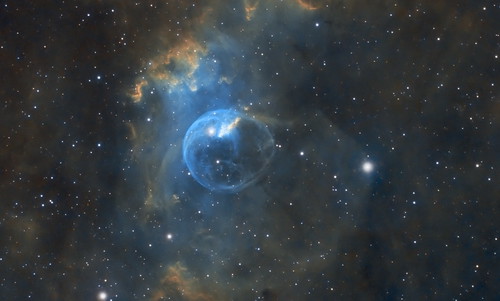 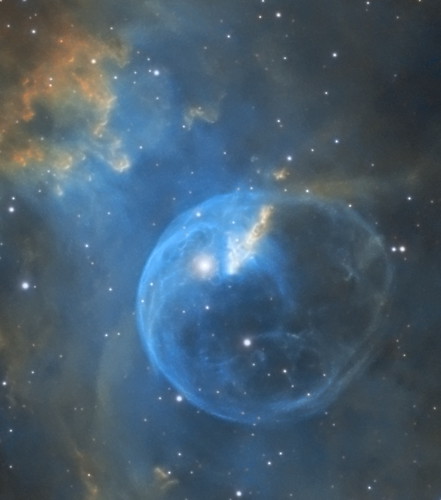 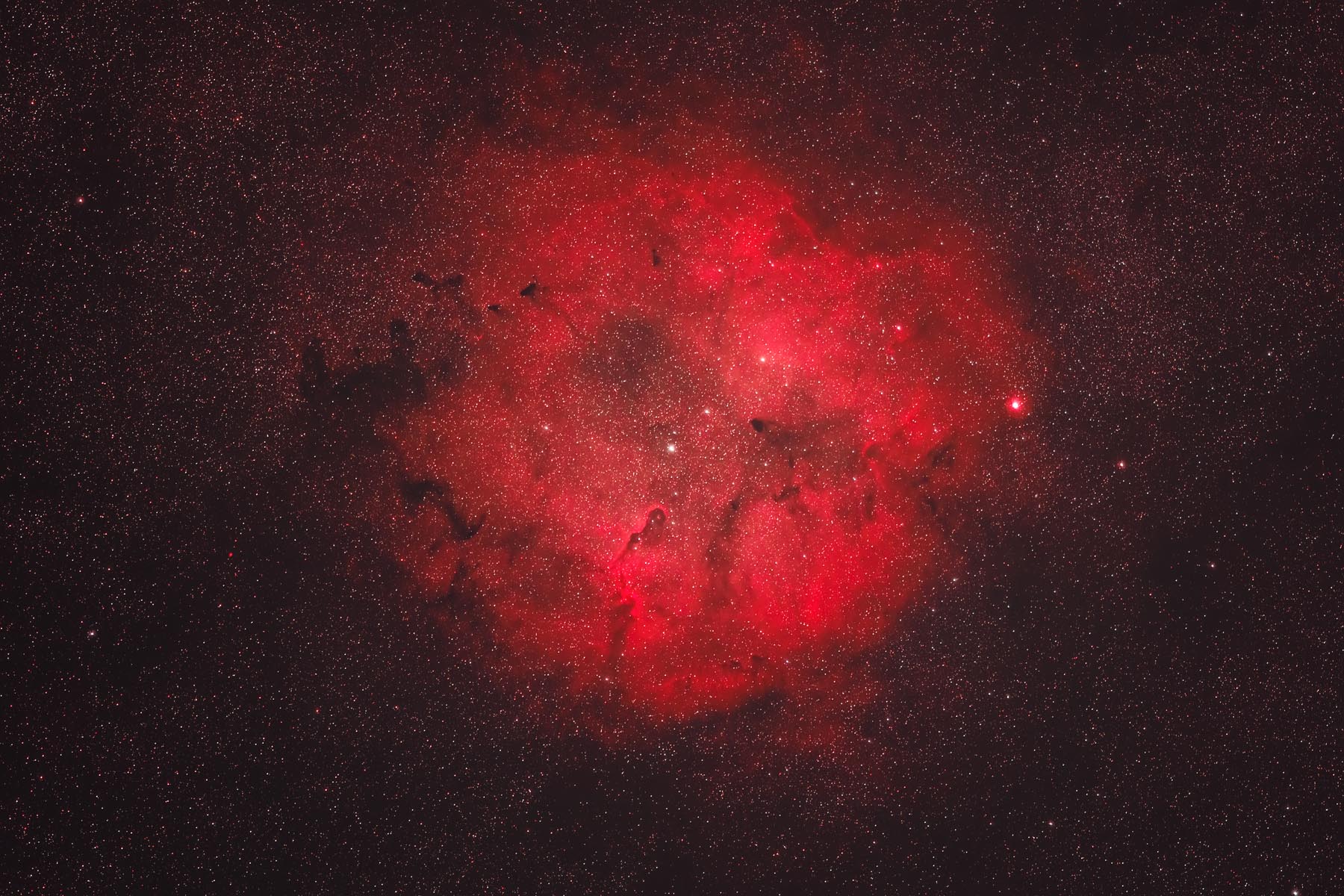 HYGNUS VOLCANIC CRATER AND THE ACCUMULATION OF VOLCANIC ASHES

HYGINUS is one of the few craters on the lunar surface that does not have an impact from a celestial body.
It is considered the largest crater of volcanic origin on the visible face of the Moon. Located in the center of the rhyme Hyginus, which was probably formed by lava from this crater (ARROW)
Beside it, there is prioclastic material, that is, an accumulation of volcanic ash material (CIRCLE)

The primary image data is from 66 shots at 300 seconds each. The bright core was blended in from 4 sets of 30 shots each at decreasingly shorter exposures. Shot from my backyard with a ZWO ASI2600MC camera, William Optics GT81 telescope, and Losmandy GM811G equatorial mount.