Heckathorn-Fesen-Gull 1 (HFG1) is a faint planetary nebula in Cassiopeia with a pronounced bow shock. HFG1 was discovered in 1982 and is also known as PK 136+05.1. HFG1 was formed by the mag 14.5 star V664 Case which is actually a binary star with a white dwarf and sun like component. These two stars are a few million kilometers apart and orbit each other every 14hrs. This pair is moving rapidly through the Milky Way and this rapid movement is causing the blue/green bow shock arc you can see in the image above. Opposite the direction of movement is a red tail of hydrogen gas.

Also within the image is the planetary nebula Abell 6. This planetary nebula is about 3 arc minutes in size and was discovered by George Abell in 1955. Its also blue/green due to doubly ionized oxygen (OIII) and has red hydrogen (HII) filaments. Abell 6 also goes by the designation PK 136+ 04.1. 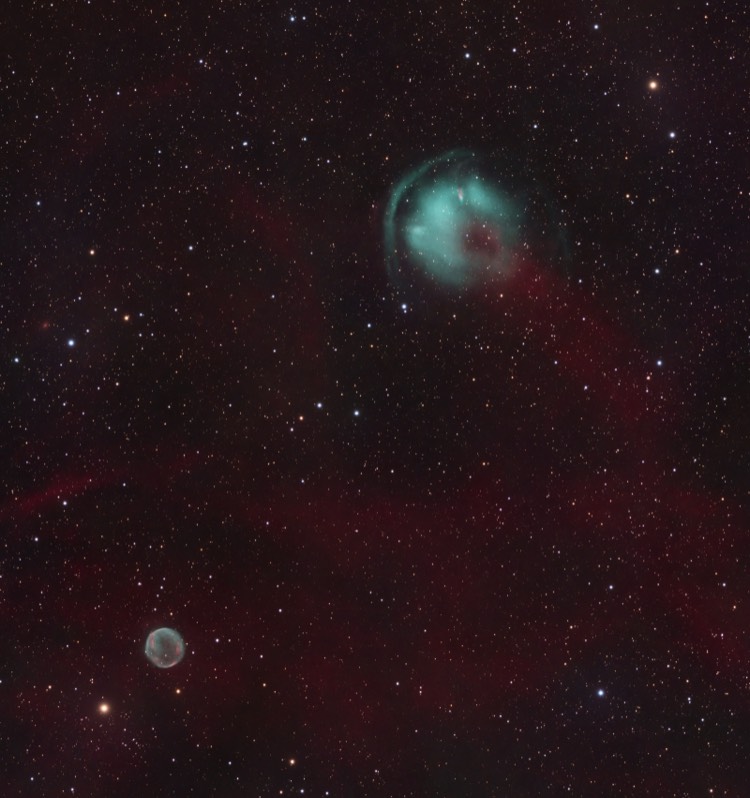 
M72 (NGC 6981) is a globular cluster in the constellation Aquarius, at a distance of approximately 50,000 light-years from Earth, it is one of the most distant clusters that make up the Messier catalogue.
It's not very dense, only Messier 71 and Messier 56 are less dense than M72.
It was discovered by Pierre Méchain on August 29, 1780, being the first of five star clusters that Méchain would discover while helping Messier. 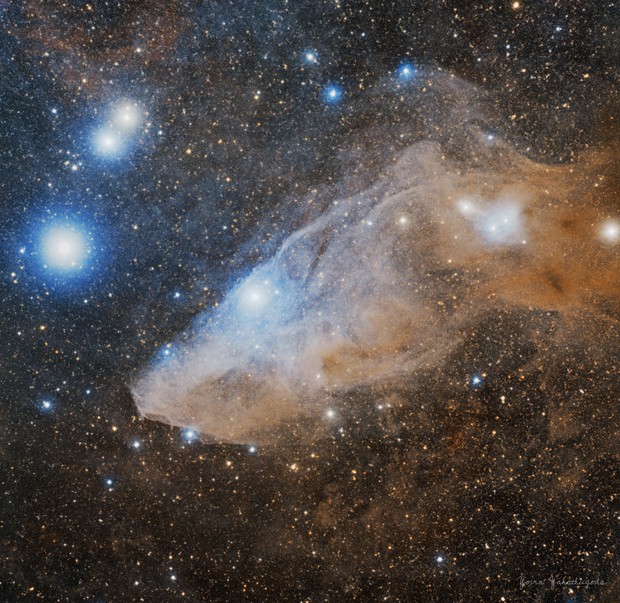 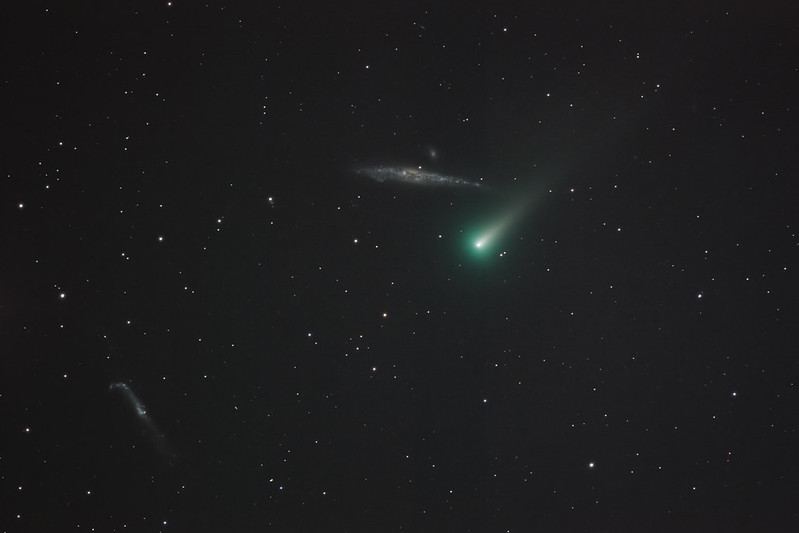 Venus on November 26th, 22:29ut. Getting large in size but less surface details as the crescent becomes narrower. ( LX200ACF 305mm, ASI183mm Pro, Astronomik IrRGBUv filters.
You do not have the required permissions to view the files attached to this post.
Top

Moons during daylight
Some people think that the moon can only be seen at night. In fact, if you look up at the sky, you will often find that not only the moon can be seen during the day, but the moon during the day is very charming, especially the moon under a clear blue sky.
This combined photo is the daytime moon I collected for nearly 5 years. It contains all the daytime moons of all ages. In addition to the rich and beautiful colors, the most special thing about this photo is that you can see the relationship between the moon and the sky.
The first few pictures in the first row and the last few pictures in the fourth row: The young moons and the old moons are near the sun, so they can only be observed during a short period of time when the sky is still bright around sunset and sunrise. It is pink or off-white with the sun nearby. At dawn, the thin crescent in the pink sky is the biggest motivation for people to get up early and observe, because it is so beautiful.
The last few photos of the second row and the first few photos of the third row: The nearly full moon appears opposite the sun, so I want to see the moon in the daytime only when the moon rises or the moon sets near the horizon. At this time, the sun is on the opposite side, so the sky near the moon appears dim blue-gray. The full moon during the day is the most difficult to observe, because it can only be observed for a short period of time when the moonrise or the moonset is still bright. In the summer, the daytime is longer and there is a chance to observe it. But the weather in the summer afternoon is often bad in Taiwan, so in the past five years I could barely get a picture of the full moon on a misty day (the last one in the second row).
The last few photos of the first row to the first few photos of the second row and the last few photos of the third row to the first few photos of the fourth row: The most dreamy and attractive daytime moon is the moon near the first quarter and last quarter! At this time, the angle of view between the moon and the sun in the sky is about 90 degrees, and the sky is the bluest! So when there is a moon, you will see a bright moon in the blue sky, beautiful and dreamy.
In the photo, you can also see the obvious change in the size of the moon. This is because the moon's orbit is slightly elliptical, and the distance to the earth varies. So the moons appear to be different in size.

Sh2-284 is a HII star forming region of gas and dust located in the constellation Monoceros approximately 15 thousand light years from the Earth. This remarkable nebula resembles the more familiar Rosette Nebula (Caldwell 49). Along the edges of Sh2-284 are several "elephant trunk" formations. These are monstrous pillars of gas and dust that stretch into the central void of the nebula. Perhaps the most prominent of the pillars is located to the left center. It resembles the forefinger of a hand pointing to the stars in the center of the nebula. These pillars are formed by intense radiation and stellar winds radiating from the very hot stars of the central open cluster designated Dolidze 25. The radiation and wind from the cluster is responsible for clearing the central void in the surrounding nebula. Dolidze 25 is a very young cluster with an estimated age of approximately 3 to 4 million years.
You do not have the required permissions to view the files attached to this post.
Top

AntaresLoResTommasoStella.jpg
You do not have the required permissions to view the files attached to this post.
Top

The Elephant’s Trunk Nebula is a dense region of dust and gas found within the considerably larger star forming region IC 1396 in Cepheus constellation. Designated IC 1396A, the elongated globule of dust and gas was named the Elephant’s Trunk because it resembles an elephant’s head and trunk at visible wavelengths, appearing as a dark patch with a bright winding rim. It is located at a distance of 2,400 light years from Earth.