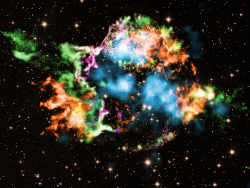 
Stars are chemical factories, and the way in which they build up complex elements from simpler component is well understood. How stars distribute these products is less well understood. Massive stellar winds from high-mass stars, moving at velocities of millions of miles per hour, carrying about an earth's mass of material from the star every year, play an important role. The most important means of delivering chemicals from the star to its galactic neighborhood (or beyond) is through supernovae, the explosion that follows the exhaustion of thermonuclear fuel at the core of a high-mass star. During a supernova, the stellar core, the furnace powering the star and holding it up against gravity, stops producing energy, causing the core and inner part of the star to implode. Somehow this theoretical implosion is converted to an actual explosion and the star blows itself apart. How this change of infall to outflow happens is a matter of uncertainty and debate. Earlier theoretical models completely failed to produce a stellar explosion through relatively straightforward physics. More modern models suggest that subatomic particles called neutrinos play a key role in the explosion. Neutrinos, so-called "ghost particles" are difficult to detect since they hardly ever interact with matter under normal conditions. In fact, about 100 trillion neutrinos pass through your body every second without you being aware of them, or you suffering any ill effects because of them. But under the extremely high densities and temperatures near the center of a collapsing star, neutrinos can exert substantial pressure, forming "bubbles" in the interior of the star which can play an important role in driving the supernova explosion. The image above is a beautiful X-ray image from the Chandra and NuSTAR X-ray observatories of the Cas A supernova remnant (superimposed on an optical image from the Hubble Space Telescope). The different colors code for different elements in the supernova ejecta - iron (orange), oxygen (purple), the amount of silicon compared to magnesium (green), titanium (from NuSTAR, in light blue) - and shows that different elements are found in different portions of the hot ejected gas. A detailed study of the distribution of elements seen in the Chandra and NuSTAR observations, especially titanium and chromium, suggest that these elements were formed at temperatures and densities very similar to those predicted by neutrino bubble explosion models.

Click to play embedded YouTube video.
Credit: Chandra: NASA/CXC/RIKEN/T. Sato et al.;
NuSTAR: NASA/NuSTAR; Hubble: NASA/STScI
Astronomers using NASA's Chandra X-ray Observatory have announced the discovery of an important type of titanium, along with other elements, blasting out from the center of the supernova remnant Cassiopeia A (Cas A). This new result, as outlined in our latest press release, could be a major step for understanding exactly how some of the most massive stars explode.

The different colors in this new image mostly represent elements detected by Chandra in Cas A: iron (orange), oxygen (purple), and the amount of silicon compared to magnesium (green). Titanium (light blue) detected previously by NASA's NuSTAR telescope at higher X-ray energies is also shown. These Chandra and NuSTAR X-ray data have been overlaid on an optical-light image from the Hubble Space Telescope (yellow).

The heat from this cataclysmic event produces a shock wave — similar to a sonic boom from a supersonic jet — that races outwards through the rest of the doomed star, producing new elements by nuclear reactions as it goes. However, in many computer models of this process, energy is quickly lost and the shock wave's journey outwards stalls, preventing the supernova explosion.

Recent three-dimensional computer simulations suggest that neutrinos — very low mass subatomic particles — made in the creation of the neutron star drive bubbles that speed away from the center of the explosion. These bubbles continue driving the shock wave forward to trigger the supernova explosion.


High-Entropy Ejecta Plumes in Cassiopeia A from Neutrino-Driven Convection ~ Toshiki Sato et al
Know the quiet place within your heart and touch the rainbow of possibility; be
alive to the gentle breeze of communication, and please stop being such a jerk. — Garrison Keillor
Top
2 posts • Page 1 of 1