Find out the latest thinking about our universe.
77 posts

InSight's 'Mole' Is Out of Sight


Now that the heat probe is just below the Martian surface, InSight's arm will scoop some additional soil on top to help it keep digging so it can take Mars' temperature.


PIA24098[1].gif
NASA's InSight retracted its robotic arm on Oct. 3, 2020, revealing where the spike-like
'mole' is trying to burrow into Mars. The copper-colored ribbon attached to the mole has
sensors to measure the planet's heat flow. In the coming months, the arm will scrape and
tamp down soil on top of the mole to help it dig. Credits: NASA/JPL-Caltech
NASA's InSight lander continues working to get its "mole" – a 16-inch-long (40-centimeter-long) pile driver and heat probe – deep below the surface of Mars. A camera on InSight's arm recently took images of the now partially filled-in "mole hole," showing only the device's science tether protruding from the ground.

Sensors embedded in the tether are designed to measure heat flowing from the planet once the mole has dug at least 10 feet (3 meters) deep. The mission team has been working to help the mole burrow to at least that depth so that it can take Mars' temperature.

The mole was designed so that loose soil would flow around it, providing friction against its outer hull so that it can dig deeper; without this friction, the mole just bounces in place as it hammers into the ground. But the soil where InSight landed is different than what previous missions have encountered: During hammering, the soil sticks together, forming a small pit around the device instead of collapsing around it and providing the necessary friction.

After the mole unexpectedly backed out of the pit while hammering last year, the team placed the small scoop at the end of the lander's robotic arm on top of it to keep it in the ground. Now that the mole is fully embedded in the soil, they will use the scoop to scrape additional soil on top of it, tamping down this soil to help provide more friction. Because it will take months to pack down enough soil, the mole isn't expected to resume hammering until early 2021. ... 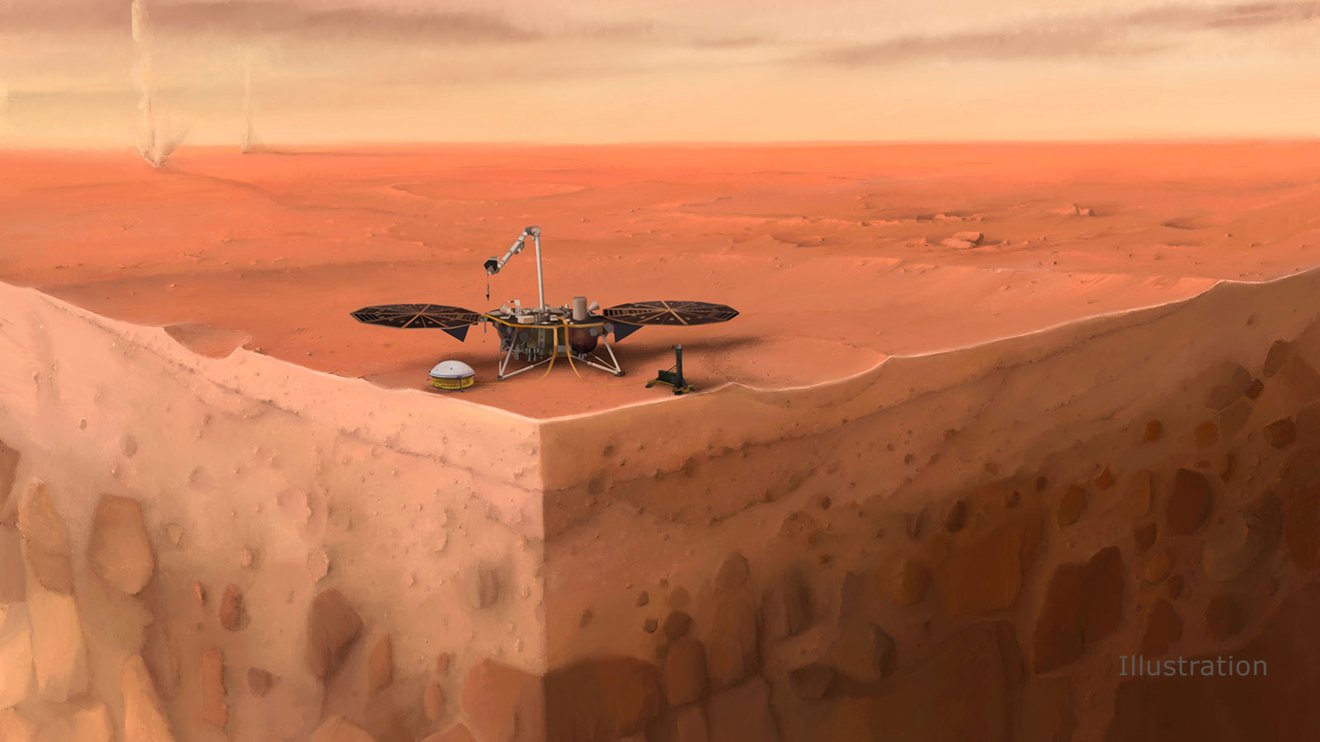 In this artist's concept of NASA's InSight lander on Mars, layers of the planet's subsurface can be seen below, and dust devils can be seen in the background. Credits: IPGP/Nicolas Sarter

The heat probe hasn’t been able to gain the friction it needs to dig, but the mission has been granted an extension to carry on with its other science.

The heat probe developed and built by the German Aerospace Center (DLR) and deployed on Mars by NASA’s InSight lander has ended its portion of the mission. Since Feb. 28, 2019, the probe, called the “mole,” has been attempting to burrow into the Martian surface to take the planet’s internal temperature, providing details about the interior heat engine that drives the Mars’ evolution and geology. But the soil’s unexpected tendency to clump deprived the spike-like mole of the friction it needs to hammer itself to a sufficient depth.

After getting the top of the mole about 2 or 3 centimeters under the surface, the team tried one last time to use a scoop on InSight’s robotic arm to scrape soil onto the probe and tamp it down to provide added friction. After the probe conducted 500 additional hammer strokes on Saturday, Jan. 9, with no progress, the team called an end to their efforts. ...

The unexpected properties of the soil near the surface next to InSight will be puzzled over by scientists for years to come. The mole’s design was based on soil seen by previous Mars missions – soil that proved very different from what the mole encountered. For two years, the team worked to adapt the unique and innovative instrument to these new circumstances. ...

Besides learning about the soil at this location, engineers have gained invaluable experience operating the robotic arm. In fact, they used the arm and scoop in ways they never intended to at the outset of the mission, including pressing against and down on the mole. Planning the moves and getting them just right with the commands they were sending up to InSight pushed the team to grow.

They’ll put their hard-earned wisdom to use in the future. The mission intends to employ the robotic arm in burying the tether that conveys data and power between the lander and InSight’s seismometer, which has recorded more than 480 marsquakes. Burying it will help reduce temperature changes that have created cracking and popping sounds in seismic data.

There’s much more science to come from InSight, short for Interior Exploration using Seismic Investigations, Geodesy, and Heat Transport. NASA recently extended the mission for two more years, to Dec. 2022. Along with hunting for quakes, the lander hosts a radio experiment that is collecting data to reveal whether the planet’s core is liquid or solid. And InSight’s weather sensors are capable of providing some of the most detailed meteorological data ever collected on Mars. Together with weather instruments aboard NASA's Curiosity rover and its new Perseverance rover, which lands on Feb. 18, the three spacecraft will create the first meteorological network on another planet.


Insight mission extended
Know the quiet place within your heart and touch the rainbow of possibility; be
alive to the gentle breeze of communication, and please stop being such a jerk. — Garrison Keillor
Top
77 posts