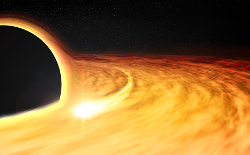 
Gravity is remorseless, and, though relatively weak, needs to be treated with great respect, or dire consequences may result. On November 22, 2014, a distress signal was detected by the All-Sky Automated Survey for Supernovae (known by its deadly acronym, ASAS-SN), a network of 24 telescopes around the globe which monitor the sky for extraordinary celestial transients. Astronomers realized that this signal was produced by a tidal disruption event in a distant galaxy. These events mean that an unwitting star wandered too close to a massive black hole, and the strong tidal pull of the massive black hole ripped the star to shreds. The remnants of the star (and any planets around it) can form a short-lived disk of material as it spirals towards the black hole's event horizon (as illustrated above). The shredded material increases in temperature as it spirals ever faster towards the black hole and begins to emit high energy X-ray radiation. Opportunistic astronomers can actually use the X-ray emission to test the conditions in the warped spacetime very near the black hole. Astronomers using the XMM-Newton and the Chandra X-ray space telescopes were able to document a strong, nearly periodic signal produced by the swirling gas from the disrupted star. This signal lasted more than a year after the initial discovery of the transient event, suggesting that the black hole is a relatively slow eater. Detailed studies of the variable X-rays produced in the disk of material swirling into the black hole showed that some of the material must be surprisingly close to the event horizon. According to general relativity, material can only survive very close to the black hole if the black hole is spinning rapidly. The analysis of the X-ray signal suggests that this particular black hole has a spin period of only 2 minutes, very near the limit allowed by relativistic physics for such a massive black hole.