Here's the abstract of a paper just out in The Astronomical Journal about a new space telescope designed to search for exoplanets and rogues by the gravitational lens method:

The Nancy Grace Roman Space Telescope (Roman) will perform a Galactic Exoplanet Survey (RGES) to discover bound exoplanets with semimajor axes greater than 1 au using gravitational microlensing. Roman will even be sensitive to planetary-mass objects that are not gravitationally bound to any host star. Such free-floating planetary-mass objects (FFPs) will be detected as isolated microlensing events with timescales shorter than a few days. A measurement of the abundance and mass function of FFPs is a powerful diagnostic of the formation and evolution of planetary systems, as well as the physics of the formation of isolated objects via direct collapse. We show that Roman will be sensitive to FFP lenses that have masses from that of Mars (0.1 M ⊕) to gas giants (M gsim 100 M ⊕) as isolated lensing events with timescales from a few hours to several tens of days, respectively. We investigate the impact of the detection criteria on the survey, especially in the presence of finite-source effects for low-mass lenses. The number of detections will depend on the abundance of such FFPs as a function of mass, which is at present poorly constrained. Assuming that FFPs follow the fiducial mass function of cold, bound planets adapted from Cassan et al., we estimate that Roman will detect ~250 FFPs with masses down to that of Mars (including ~60 with masses ≤ M ⊕). We also predict that Roman will improve the upper limits on FFP populations by at least an order of magnitude compared to currently existing constraints.

(Apologies for not supplying the link to this. See the link in bystanders first bulletpoint included in the following post.)
Last edited by BDanielMayfield on Mon Aug 24, 2020 5:34 pm, edited 1 time in total.
Just as zero is not equal to infinity, everything coming from nothing is illogical.
Top 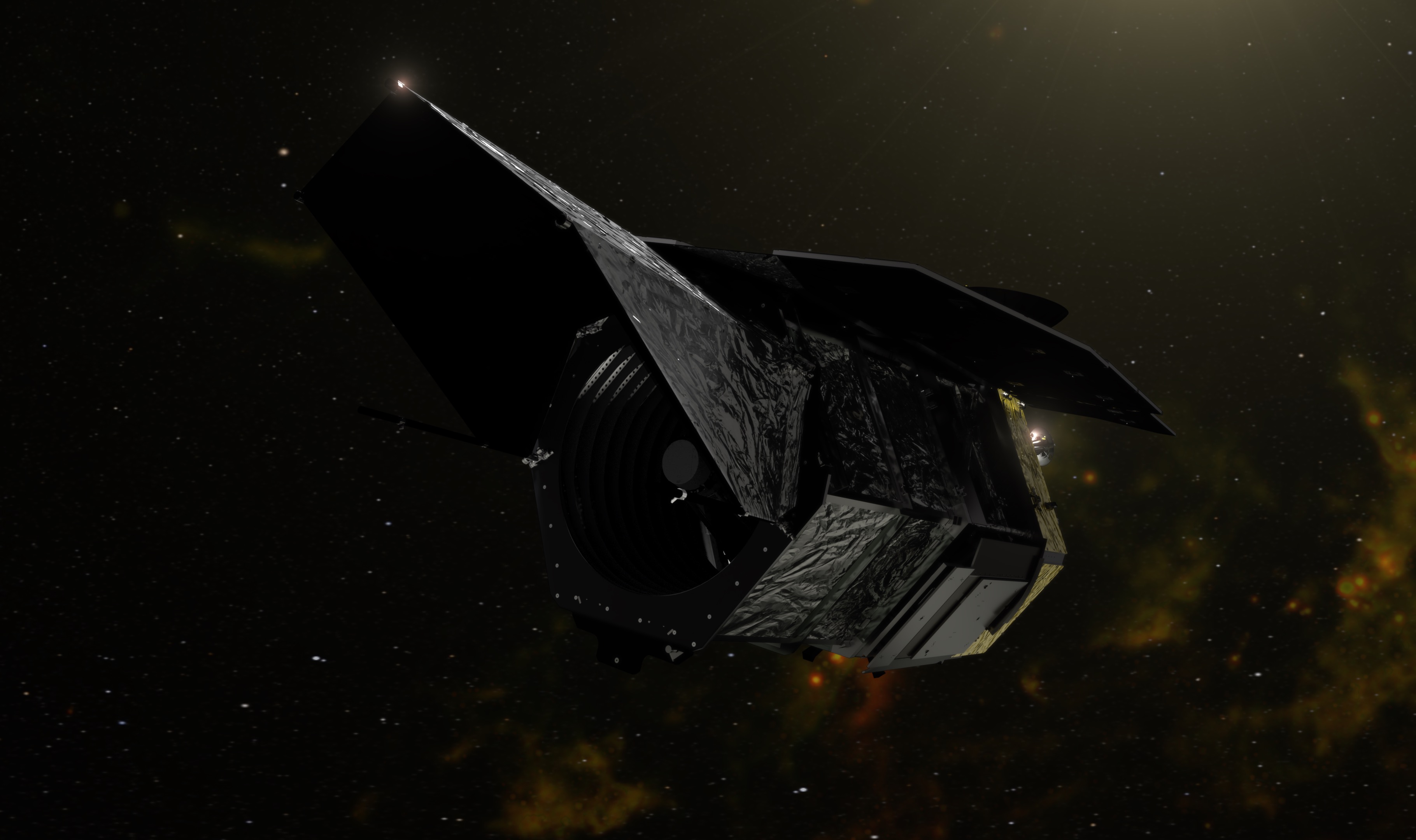 High-resolution illustration of the Roman spacecraft against a starry background. Credit: NASA/GSFC

New simulations show that NASA’s Nancy Grace Roman Space Telescope will be able to reveal myriad rogue planets – freely floating bodies that drift through our galaxy untethered to a star. Studying these island worlds will help us understand more about how planetary systems form, evolve, and break apart.

Astronomers discovered planets beyond our solar system, known as exoplanets, in the 1990s. We quickly went from knowing of only our own planetary system to realizing that planets likely outnumber the hundreds of billions of stars in our galaxy. Now, a team of scientists is finding ways to improve our understanding of planet demographics by searching for rogue worlds. ...

Roman will find rogue planets by conducting a large microlensing survey. Gravitational lensing is an observational effect that occurs because the presence of mass warps the fabric of space-time. The effect is extreme around very massive objects, like black holes and entire galaxies. Even solitary planets cause a detectable degree of warping, called microlensing.

If a rogue planet aligns closely with a more distant star from our vantage point, the star’s light will bend as it travels through the curved space-time around the planet. The result is that the planet acts like a natural magnifying glass, amplifying light from the background star. Astronomers see the effect as a spike in the star’s brightness as the star and planet come into alignment. Measuring how the spike changes over time reveals clues to the rogue planet’s mass. ...


Predictions of the Nancy Grace Roman Space Telescope Galactic Exoplanet
Survey II: Free-Floating Planet Detection Rates ~ Samson A. Johnson et al
viewtopic.php?t=35659
Know the quiet place within your heart and touch the rainbow of possibility; be
alive to the gentle breeze of communication, and please stop being such a jerk. — Garrison Keillor
Top

Ah, so this is a new name for WFIRST. I've been reading about astronomers expectations from WFIRST for many years now.
Just as zero is not equal to infinity, everything coming from nothing is illogical.
Top

Re: Nancy to Hunt for Rogues

I find this expectation to be amazing, and wonderful for prospects of estimating the numbers of even small rogue planets:

We show that Roman will be sensitive to FFP lenses that have masses from that of Mars (0.1 M ⊕) to gas giants (M gsim 100 M ⊕) as isolated lensing events with timescales from a few hours to several tens of days, respectively.

The idea that a body as low massed as Mars is can form a gravitational lens is astonishing.
Just as zero is not equal to infinity, everything coming from nothing is illogical.
Top