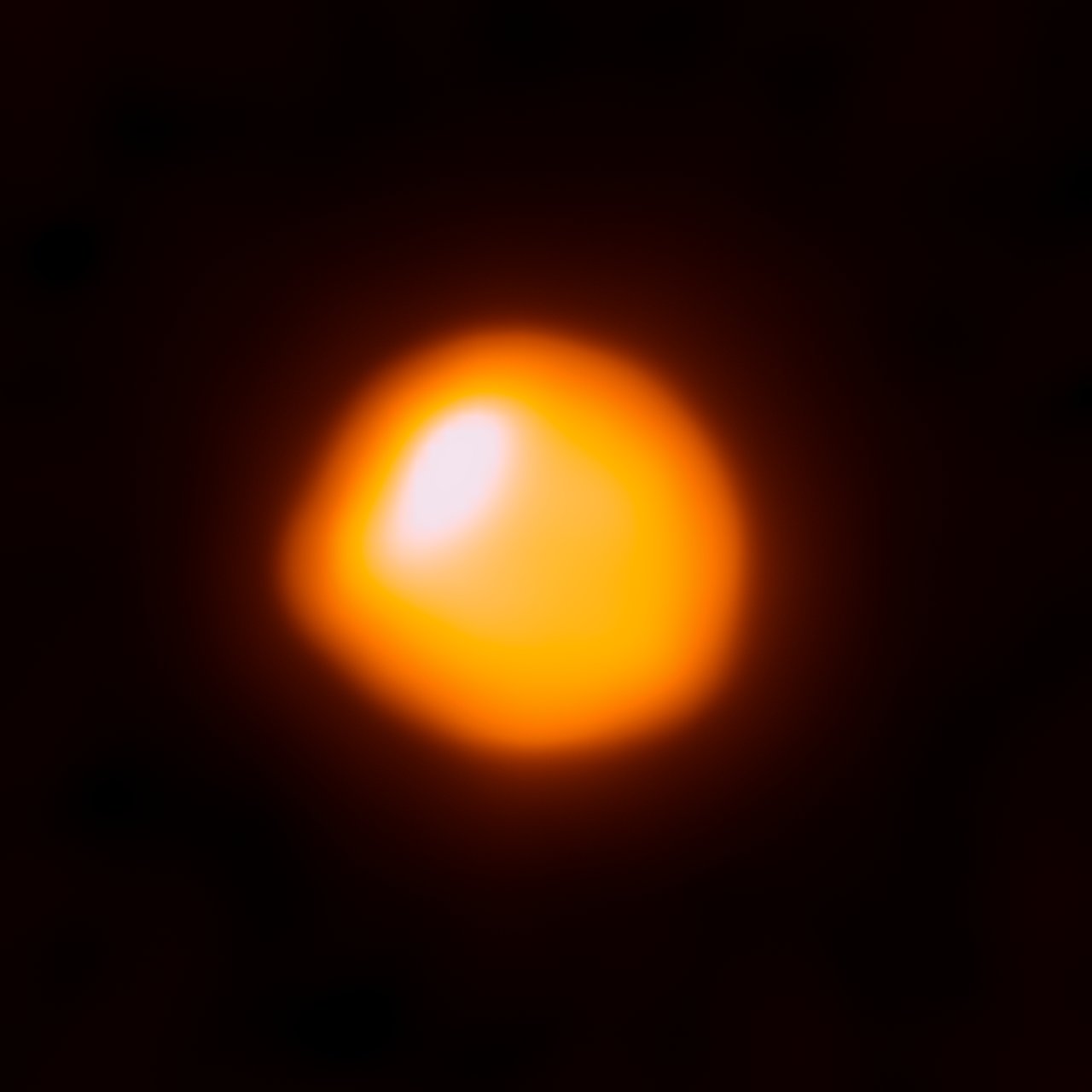 It may be another 100,000 years until the giant red star Betelgeuse dies in a fiery explosion, according to a new study by an international team of researchers.

The study, led by Dr Meridith Joyce from The Australian National University (ANU), not only gives Betelgeuse a new lease on life, but shows it is both smaller and closer to Earth than previously thought.

Dr Joyce says the supergiant – which is part of the Orion constellation – has long fascinated scientists. But lately, it’s been behaving strangely.

“It’s normally one of the brightest stars in the sky, but we’ve observed two drops in the brightness of Betelgeuse since late 2019,” Dr Joyce said.

“This prompted speculation it could be about to explode. But our study offers a different explanation.

“We know the first dimming event involved a dust cloud. We found the second smaller event was likely due to the pulsations of the star.”

The researchers were able to use hydrodynamic and seismic modelling to learn more about the physics driving these pulsations – and get a clearer idea of what phase of its life Betelgeuse is in. ...


Standing on the Shoulders of Giants: New Mass and Distance Estimates for Betelgeuse through
Combined Evolutionary, Asteroseismic, and Hydrodynamic Simulations with MESA ~ Meridith Joyce et al
viewtopic.php?t=40726
viewtopic.php?t=40345
viewtopic.php?t=40325
viewtopic.php?t=40279
Know the quiet place within your heart and touch the rainbow of possibility; be
alive to the gentle breeze of communication, and please stop being such a jerk. — Garrison Keillor
Top

https://anu.prezly.com/supergiant-star-betelgeuse-smaller-closer-than-first-thought# wrote:
“Once we had the physical size of the star, we were able to determine the distance from Earth. Our results show it’s a mere 530 light years from us – 25 per cent closer than previous thought. It’s still a really big deal when a supernova goes off. And this is our closest candidate. It gives us a rare opportunity to study what happens to stars like this before they explode,” Dr Joyce said.

This one is for you, KayBur, because you said that you are like to discuss things that pertain to astronomy!

I was recently asked, in private conversation, which red supergiant star is brighter, Antares or Betelgeuse. Lately the consensus has been (the way I understand it) that Betelgeuse is brighter, so I sort of reiterated that information to the person who asked the question.

But now look at this study of Betelgeuse, which claims that Betelgeuse is considerably smaller than previously thought!

I felt I had to correct my statement that Betelgeuse is brighter than Antares, so I wrote another PM. I had to think a lot about what I wrote and try to understand and clarify a lot of things. I think that what I wrote was kind of interesting, so I'm inserting my PM here. It would be interesting if you, KayBur, have any thoughts about it!

I frankly don't understand too much of how the team was able to conclude that Betelgeuse is smaller than previously thought, but I noticed this:


The researchers were able to use hydrodynamic and seismic modelling to learn more about the physics driving these pulsations – and get a clearer idea of what phase of its life Betelgeuse is in.

According to co-author Dr Shing-Chi Leung from The University of Tokyo, the analysis “confirmed that pressure waves – essentially, sound waves—were the cause of Betelgeuse’s pulsation.”

“It’s burning helium in its core at the moment, which means it’s nowhere near exploding,” Dr Joyce said.

Different oscillation modes have different sensitivities to the structure of a star. By observing multiple modes, one can therefore partially infer a star's internal structure.

Well, wow. I don't know much (or anything) about hydrodynamics, but I know a tiny little bit about astroseismology, which has to do with modelling the properties of a star by observing the oscillations that are visible on the star's surface and creating models of how the oscillations are caused by sound waves travelling inside the star.

Astronomers know a lot about the oscillations of the Sun, because the Sun is nearby and can be studied in detail. The team of researchers studying Betelgeuse used models of astroseismology to conclude that the pulsations of Betelgeuse are caused by sound waves.

According to the results of the team's modelling, Betelgeuse is nowhere near the very end of its life. Instead, it is basically at the same stage of its life as well-known star Arcturus: It is fusing helium to carbon and oxygen in its core! I would guess that "helium burning" causes a specific kind of oscillations and pulsations in a large star according to the team's modelling, and much of the dimming and brightening of Betelgeuse (except the very drastic dimming about a year ago) was found to be caused by pulsations driven by helium burning. (Well, that's how I interpret the information in the article.) 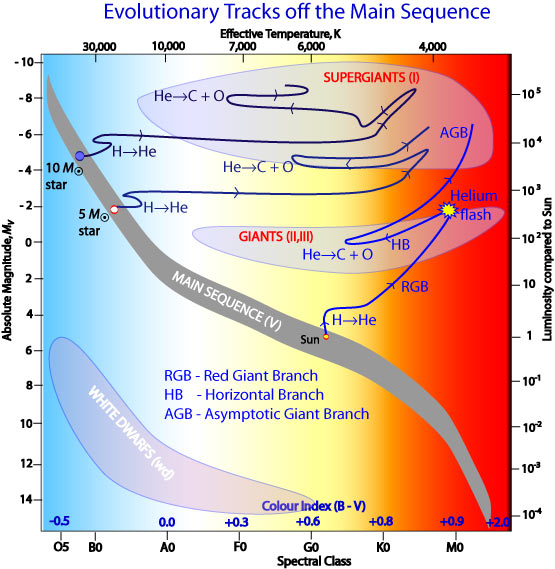 
What does it mean that Betelgeuse is fusing helium in its core? Take a look at the picture at right. The way I read the top track, that of a 10 solar mass star, Betelgeuse would now be on the "He ⮕ C + O" track, which would make it either fainter or bluer than it was when it was on its brightest and reddest "H ⮕ He" track!

Why has it been so hard to determine how far away (and therefore how bright) Betelgeuse really is? Take a look at the splendid 212-hour exposure of Orion by Stanislav Volskiy (check out the annotated APOD version here):

Can you see that Betelgeuse (the bright yellow-orange star) appears to be "cut off" from the other stars and the other nebulas in Orion? It is located right next to the large round red Lambda Orionis Nebula, but it is clearly separated from it. Betelgeuse is "alone", in the same way that blue star Bellatrix (at upper right) is also "alone". Bellatrix is known to be a foreground object. So, actually, is Betelgeuse, although Betelgeuse was always known to be more distant than Bellatrix. 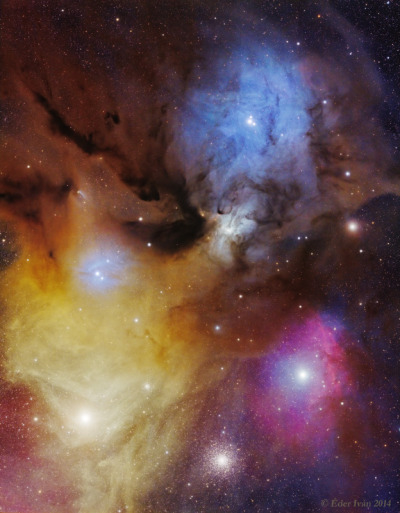 
Betelgeuse is a runaway star. Can you see that there is a little red "arm" pointing straight at Betelgeuse? My own amateur guess is that this might be a "wake" of some sort left behind by Betelgeuse as it speeds through space.


Compare the "isolation" of Betelgeuse with the "snuggly companionship" of Antares. Antares is obviously immersed in a huge nebula that also contains Rho Ophiuchi, the trio of stars lighting up a blue nebula at top right. Antares makes its own nebula shine with a yellow light. There are also a few stars that create a much smaller blue nebula "above" Antares.


My point is that all these stars are immersed in the "same" dusty nebula, and they are therefore at more or less the "same" distance. So we can use the other stars to help infer to distance to Antares. We can't do that for Betelgeuse. 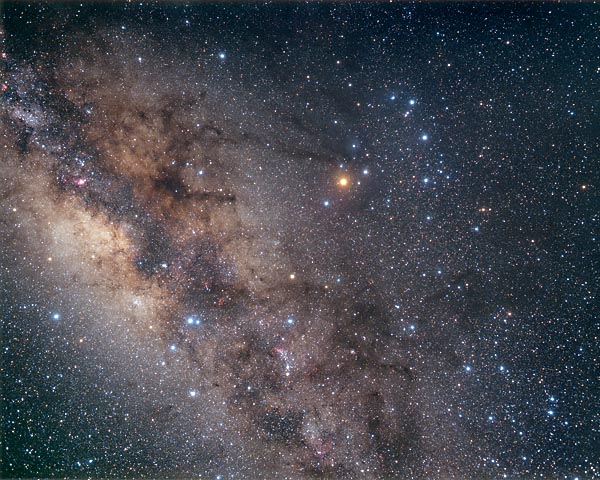 
Also take a look at this beautiful widefield image of the Antares-Rho Ophiuchi complex over the band of the Milky Way. You can see bright orange star Antares, and you can see the plane of the Milky Way. Note, however, that some distance "above" the Milky Way, but parallel to it, "floats" a scattering of blue stars all the way down to the bottom of the image.

Finally, why has it been so hard to use parallax measurements to determine the distance to Betelgeuse? For two reasons, I think. Betelgeuse is sufficiently far away that our previous best parallax-measuring satellite, Hipparcos, was unable to get a reliable parallax for it. And our current best parallax-measuring instrument, Gaia, can't do it either, because Betelgeuse is too bright for Gaia!

Secondly, Betelgeuse is indeed pulsating, proably getting bigger and smaller as it does so. This is problematic when you measure parallaxes, which have to do with how stars seem to "move" imperceptibly across the sky as the Earth moves around the Sun.

Also, the star is not round, and its shape may actually change over time. And its "edges" are fuzzy, in stark contrast to the Sun. This picture of the ISS transiting the Sun is too large, 1.42 MB, but you have to see it. 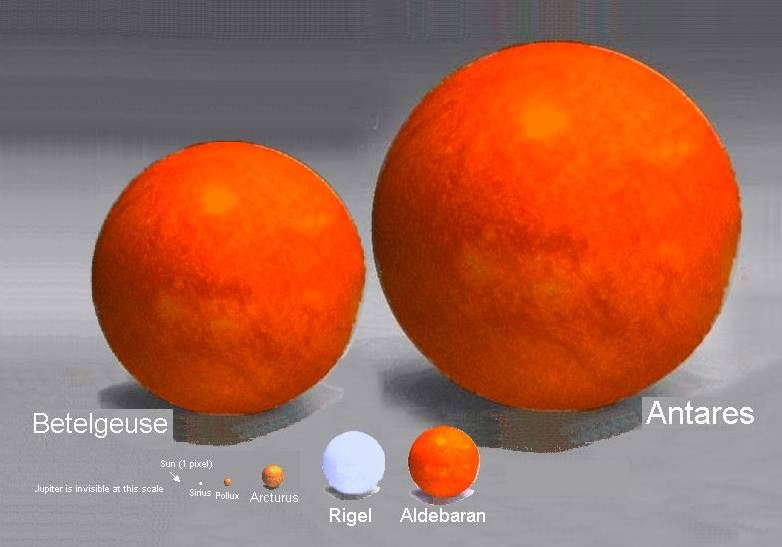 
Okay, that was my PM! This is the kind of stuff that I find interesting!