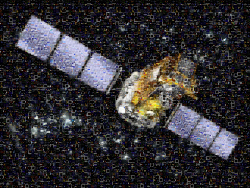 
The most extreme phenomena in the Universe, like exploding stars, active black holes, and other weird things that go bang in the night, generate very high energy X-ray and gamma ray radiation. Studying these extreme phenomena requires pinpointing the sources of this extreme radiation and measuring their properties. But this turns out to be a difficult task, because this high-energy radiation is powerful enough that it cannot be imaged by normal lenses or mirrors, and so must be indirectly reconstructed. One way to do this is to study the shadows cast by powerful gamma-ray sources, and to figure out where a source needs to be positioned, and how bright it must be, to cast a particular shadow. The International Gamma-Ray Astrophysics Laboratory, or INTEGRAL, launced in 2002, is one of the premier instruments for observing shadows of extreme sources in gamma-rays. INTEGRAL is a full astrophysical facility, since, in addition to the gamma-ray instruments, INTEGRAL carries on board telescopes to study gamma-ray sources by their optical and soft-X-ray emission. INTEGRAL has, during its more the 2300 orbits of the earth, made major discoveries, confirming gamma-ray emission from merging neutron stars, showing that mysterious "fast radio bursts" are associated with strongly magnetized neutron stars by pinpointing coincident gamma-ray emission. The image above is a mosaic created in honor of the 18th anniversary of INTEGRAL's launch, in which a picture of the INTEGRAL spacecraft is constructed from thousands of individual pictures of INTEGTRAL science highlights. To get the full effect, make sure you take a look at the full resolution image.