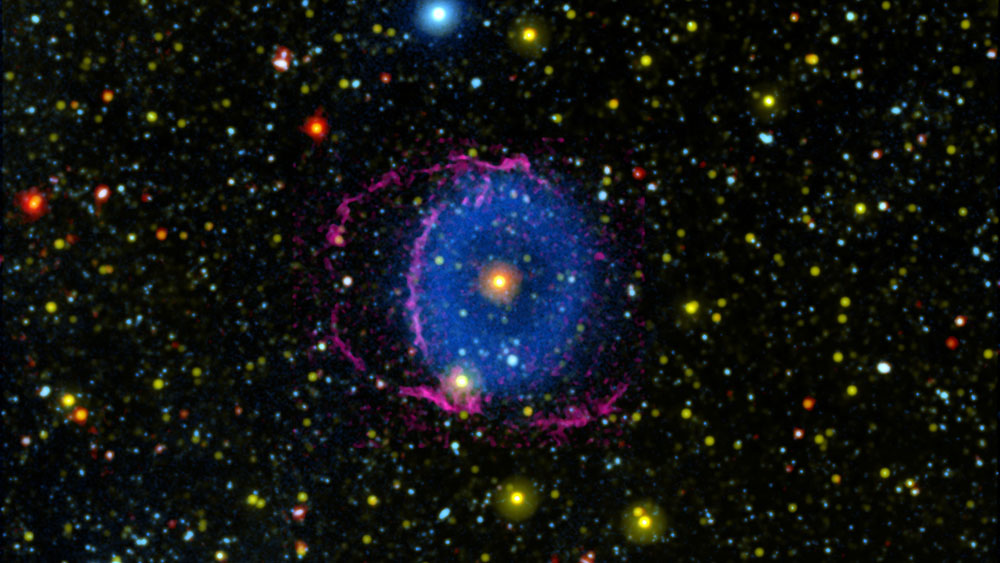 The Blue Ring Nebula is invisible to the human eye, but telescopes can measure the ultraviolet light, which is shown here in blue. (NASA/JPL-Caltech/M. Seibert (Carnegie Institution for Science)/K. Hoadley (Caltech)/GALEX Team)

About 6,200 lightyears from Earth, a mysterious star appears surrounded by a doughnut of foggy blue light. It’s an old-looking star sitting in a young star’s dust cloud, and scientists have been trying to figure out how it formed since they first spotted it in 2004. Now, a team of astronomers says they’ve cracked the case, Monica Young reports for Sky & Telescope.

In a paper published on November 18 in the journal Nature, the research team explains how a collision of two stars several thousand years ago would create the structure observed today. It’s currently the only known example of a two-star collision that’s in the middle of transitioning from its debris-strewn initial stage to the late stage when the debris would become invisible.

The strange star is not surrounded by a blue ring after all. Instead, it's flanked by a pair of cones that face outward, like megaphones pointing in opposite directions. Each cone is too faint to be observed on its own, but because one cone is lined up behind the other from Earth’s point of view, telescopes like NASA’s Galaxy Evolution Explorer (GALEX) could make out the shape of a blue ring...

(Columbia University theorist and astronomer Brian) Metzger suggested that the blue ring nebula, with its strange cones and dust disk, could represent the events just a few thousand years after the collision of two stars.

Abstract : <<Stellar mergers are a brief but common phase in the evolution of binary star systems1,2. These events have many astrophysical implications; for example, they may lead to the creation of atypical stars (such as magnetic stars, blue stragglers and rapid rotators), they play an important part in our interpretation of stellar populations and they represent formation channels of compact-object mergers. Although a handful of stellar mergers have been observed directly, the central remnants of these events were shrouded by an opaque shell of dust and molecules, making it impossible to observe their final state (for example, as a single merged star or a tighter, surviving binary). Here we report observations of an unusual, ring-shaped ultraviolet (‘blue’) nebula and the star at its centre, TYC 2597-735-1. The nebula has two opposing fronts, suggesting a bipolar outflow of material from TYC 2597-735-1. The spectrum of TYC 2597-735-1 and its proximity to the Galactic plane suggest that it is an old star, yet it has abnormally low surface gravity and a detectable long-term luminosity decay, which is uncharacteristic for its evolutionary stage. TYC 2597-735-1 also exhibits Hα emission, radial-velocity variations, enhanced ultraviolet radiation and excess infrared emission—signatures of dusty circumstellar disks, stellar activity and accretion. Combined with stellar evolution models, the observations suggest that TYC 2597-735-1 merged with a lower-mass companion several thousand years ago. TYC 2597-735-1 provides a look at an unobstructed stellar merger at an evolutionary stage between its dynamic onset and the theorized final equilibrium state, enabling the direct study of the merging process.>>

According to astronomers, the star in the center of the Blue Ring is surrounded by a disk of dust. It absorbs starlight and re-radiates it in the infrared range. The researchers believe this disk sliced the debris cloud surrounding the star in half, creating two cone-shaped clouds that extend in opposite directions. This could explain the nebula's unusual shape.
Top

A blue ring nebula from a stellar merger several thousand years ago ~ Keri Hoadley et al A "blue ring nebula" surrounding a thousands of years old stellar merger ~ Keri Hoadley et al
Know the quiet place within your heart and touch the rainbow of possibility; be
alive to the gentle breeze of communication, and please stop being such a jerk. — Garrison Keillor
Top
4 posts • Page 1 of 1