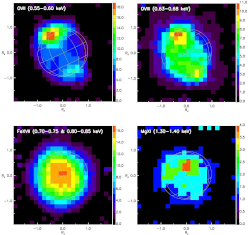 
Although the outer solar system is a cold dark place, some of the outer planets are sources of relatively bright X-ray emission. The planet Jupiter is the best example. Jupiter is a giant planet, about 10 times larger than earth and more massive than 300 earths, composed mostly of hydrogen and helium, more like the Sun than a rocky planet like earth. Scientists think of Jupiter as a "failed sun" since, if it had just a bit more mass (about a factor of 10 more), thermonuclear fires would have started burning in Jupiter's core, making it a small sun (and our solar system a binary star system). Jupiter is about 5.5 times more distant from the Sun than the earth, and takes nearly 12 years to complete one orbit. But it rotates very quickly: a day on Jupiter is only about 10 hours long. Jupiter's rapid rotation helps drive a strong internal magnetic dynamo and a strong magnetic field, similar to earth's magnetosphere but about 14 times stronger. Like earth, Jupiter generates northern and southern lights, or aurorae, at its north and south poles. X-ray emission provides important information about the magnetic processes going on in Jupiter's magnetosphere. X-ray observations by the XMM-Newton X-ray Mission, shown above, have provided important new details on these processes, showing that Jupiter's X-ray emission is brightest near its north and south poles (but much brighter near the north pole for some unclear reason). These X-rays are produced mostly by emission from atoms of oxygen, iron, magnesium and other elements trapped in the magnetosphere, colliding with fast-moving, charged atoms and swapping electrons between them. The XMM-Newton X-ray observations also show a previously-unidentified energetic X-ray component produced by electrons spiralling around Jupiter's magnetic field. XMM-Newton also showed that X-ray emission near Jupiter's equator mirror X-rays produced by the Sun, and that changes in Jupiter's X-ray emission are correlated with solar activity. These observations indicate that Jupiter's X-ray emission is strongly influenced by interactions between Jupiter's magnetosphere and charged particles ejected by the sun.