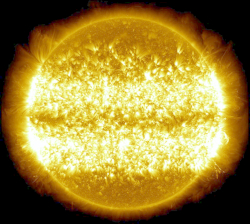 
Giver of life and warmth, the constant Sun is constantly changing. The Sun is in actuality a dynamic, swirling ball of extremely hot gas, powered by thermonuclear fires produced by the conversion of the equivalent mass of about the entire population of the US into energy every second, through the fusion of hydrogen into helium. This thermonuclear process is incredibly stable, providing a reliable energy source over billions of years. But the enormous amount of energy the Sun produces each second in its core needs to get transported to the Sun's surface. The core energy is carried to the surface by huge currents of electrified gas, unceasingly rising from the core, reaching the surface, and falling back again. These currents drive the solar dynamo, which produces the Sun's magnetic field. But the Sun also rotates, and, since the Sun is not a solid body, it rotates faster near the equator and slower at the poles. The differences in rotation with latitude causes the Sun's magnetic field to get tangled, intensifying the magnetic field in some locations, producing (relatively) small magnetized spots on the Sun's surface (only about as big as earth). These intensified fields are unstable, and can suddenly release enormous amounts of stored electromagnetic energy, producing powerful flares of radiation, heating the extended solar corona (visible during total solar eclipses, like the eclipse happening today) and ejecting billions of tons of solar material into interplanetary space (which can strip away a planet's atmosphere over time, or destroy a good portion of a civilization's technological advancement). So the Sun bears watching. On June 20, NASA's Solar Dynamics Observatory passed its 10 year anniversary of staring at the Sun. SDO was designed to help scientists understand the causes of the Sun's variations, and how they impact Earth, by providing high-resolution images of the Sun in the extreme ultraviolet energy range and by measuring the Sun's changing magnetic field and its ceasely flowing atmosphere. The image above is a combination of images obtained by SDO over the previous 10 years. This still image includes lots of notable events, like the transit of the moon across the Sun, a five-day active interval of flares and mass ejections, and the best documented study of how a sunspot is born and dies. Be sure to watch these, and other important events in this short history of the Sun, in the SDO 10-year anniversary movie.