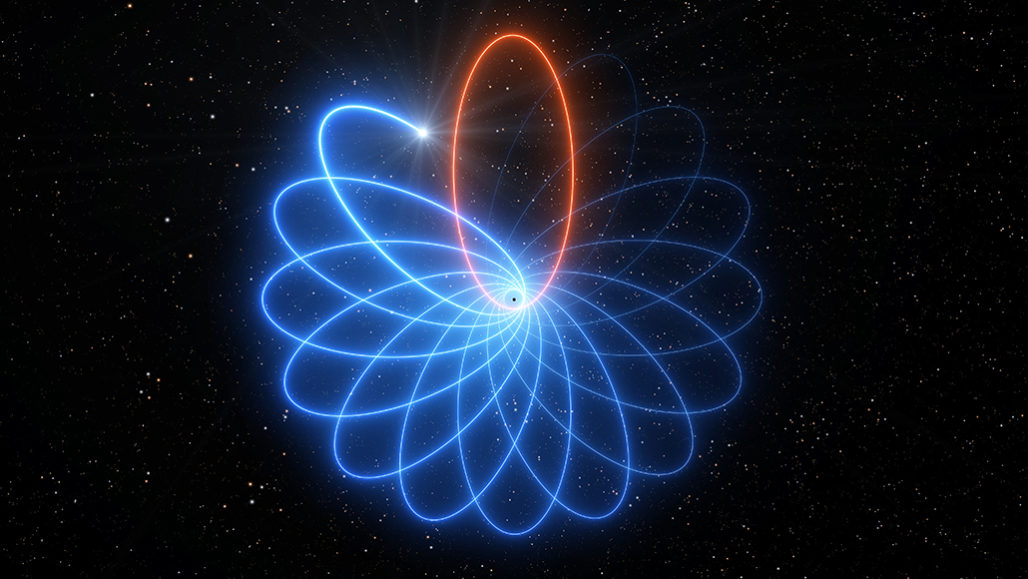 A star's rosette-shaped path around a black hole confirms Einstein's theory of gravity. Rather than tracing out a single ellipse (red), its orbit rotates over time (blue, rotation exaggerated in this illustration for emphasis). L. CALÇADA/ESO.

The first sign that Albert Einstein’s theory of gravity was correct has made a repeat appearance, this time near a supermassive black hole.

In 1915, Einstein realized that his newly formulated general theory of relativity explained a weird quirk in the orbit of Mercury. Now, that same effect has been found in a star’s orbit of the enormous black hole at the heart of the Milky Way, researchers with the GRAVITY collaboration report April 16 in Astronomy & Astrophysics.

The star, called S2, is part of a stellar entourage that surrounds the Milky Way’s central black hole. For decades, researchers have tracked S2’s elliptical motion around the black hole...

viewtopic.php?t=40464
Know the quiet place within your heart and touch the rainbow of possibility; be
alive to the gentle breeze of communication, and please stop being such a jerk. — Garrison Keillor
Top
2 posts • Page 1 of 1