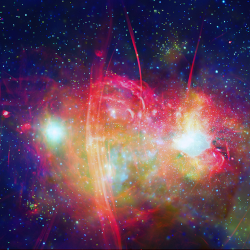 
The centers of spiral galaxies are mysterious regions, and the center of our own Milky Way is no exception. Spiral galaxies like the Milky Way have a flat extended disk of stars typically a few hundred thousand light years in diameter, and a bulge at the center of the disk. This shape is produced by the balanced interplay of the galaxy's rotation and its gravity, produced by the (light and dark) matter holding it together (along with important contributions from random collisions with other galaxies). Studying the center of the Milky Way using ground-based optical telescopes is difficult, since the center of the Galaxy is hidden behind enormously thick clouds of dust and gas which lie between the earth and the center, some 25,000 light years away. But very long wavelength radiation (like radio waves) and very short wavelength radiation (like X-rays) can penetrate this dust shroud to reveal the wonders deep in the heart of the Galaxy. The image above is a composite X-ray observation (from the Chandra X-ray Observatory, in green and blue) and a radio image (from the MeerKAT telescope in South Africa, in red). The X-ray image is a record of high energy events which have occurred near the center of the Galaxy, powered by black holes, neutron stars, supernovae and other stellar explosions. The radio emission is produced by cooler gas held in the thrall of the ornate, structured, mysterious magnetic field that threads the center and the Milky Way itself. Shown in the image is Sgr A*, a surprisingly bright 4-million solar mass monster black hole, which is sleeping at the moment. Best not disturb it.

https://en.wikipedia.org/wiki/Tasmanian_Devil_(Looney_Tunes) wrote:
<<The Tasmanian Devil, commonly referred to as Taz, is an animated cartoon character featured in the Warner Bros Looney Tunes and Merrie Melodies series of cartoons. Taz is generally portrayed as a ferocious, albeit dim-witted, carnivore with a notoriously short temper and little patience. Though he can be very devious, he is also sweet at times. His enormous appetite seems to know no bounds, as he will eat anything in his path. He is best known for his speech consisting mostly of grunts, growls, and rasps as well as his ability to spin like a vortex and bite through nearly anything. Taz does have one weakness: he can be calmed by almost any music. The only music known not to pacify Taz is the bagpipes, which he finds insufferable.>>

<<Andrea Mia Ghez (born June 16, 1965) is an American astronomer and professor in the Department of Physics and Astronomy at the University of California, Los Angeles. Her research focuses on the center of the Milky Way galaxy. In 2020, she became the fourth woman to be awarded the Nobel Prize in Physics, sharing one half of the prize with Reinhard Genzel (the other half of the prize being awarded to Roger Penrose). The Nobel Prize was awarded to Ghez and Genzel for their discovery of a supermassive compact object, now generally recognized to be a black hole, in the Milky Way's galactic center.>>