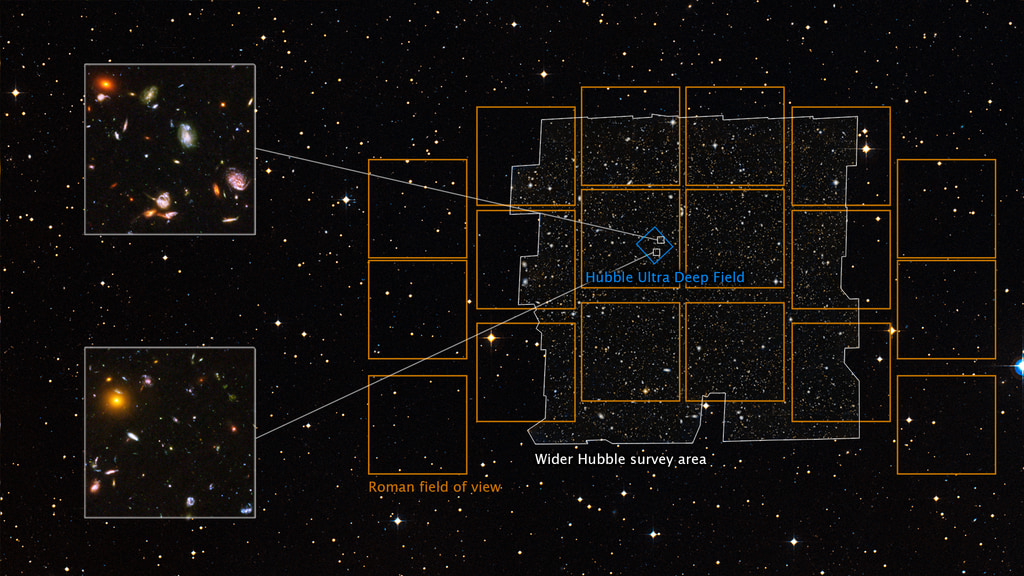 This composite image illustrates the possibility of a Roman Space Telescope “ultra deep field” observation. In a deep field, astronomers collect light from a patch of sky for an extended period of time to reveal the faintest and most distant objects. This view centers on the Hubble Ultra Deep Field (outlined in blue), which represents the deepest portrait of the universe ever achieved by humankind, at visible, ultraviolet and near-infrared wavelengths. Two insets reveal stunning details of the galaxies within the field. Beyond the Hubble Ultra Deep Field, additional observations obtained over the past two decades have filled in the surrounding space. These wider Hubble observations (outlined in white) reveal over 265,000 galaxies, but are much shallower than the Hubble Ultra Deep Field in terms of the most distant galaxies observed. These Hubble images are overlaid on an even wider view using ground-based data from the Digitized Sky Survey. An orange outline shows the field of view of NASA’s upcoming Nancy Grace Roman Space Telescope. Roman’s 18 detectors will be able to observe an area of sky at least 100 times larger than the Hubble Ultra Deep Field at one time, with the same crisp sharpness as Hubble. Credits: NASA, ESA, and A. Koekemoer (STScI); Acknowledgement: Digitized Sky Survey

One of the Hubble Space Telescope’s most iconic images is the Hubble Ultra Deep Field, which unveiled myriad galaxies across the universe, stretching back to within a few hundred million years of the Big Bang. Hubble peered at a single patch of seemingly empty sky for hundreds of hours beginning in September 2003, and astronomers first unveiled this galaxy tapestry in 2004, with more observations in subsequent years.

NASA’s upcoming Nancy Grace Roman Space Telescope will be able to photograph an area of the sky at least 100 times larger than Hubble with the same crisp sharpness. Among the many observations that will be enabled by this wide view of the cosmos, astronomers are considering the possibility and scientific potential of a Roman Space Telescope “ultra-deep field.” Such an observation could reveal new insights into subjects ranging from star formation during the universe’s youth to the way galaxies cluster together in space.

Roman will enable new science in all areas of astrophysics, from the solar system to the edge of the observable universe. Much of Roman’s observing time will be dedicated to surveys over wide swaths of the sky. However, some observing time will also be available for the general astronomical community to request other projects. A Roman ultra deep field could greatly benefit the scientific community, say astronomers. ...

As an example, a Roman ultra-deep field could be similar to the Hubble Ultra Deep Field – looking in a single direction for a few hundred hours to build up an extremely detailed image of very faint, distant objects. Yet while Hubble snagged thousands of galaxies this way, Roman would collect millions. As a result, it would enable new science and vastly improve our understanding of the universe. ...


An Ultra Deep Field survey with WFIRST ~ Anton M. Koekemoer et al
viewtopic.php?t=35659
Know the quiet place within your heart and touch the rainbow of possibility; be
alive to the gentle breeze of communication, and please stop being such a jerk. — Garrison Keillor
Top
1 post • Page 1 of 1