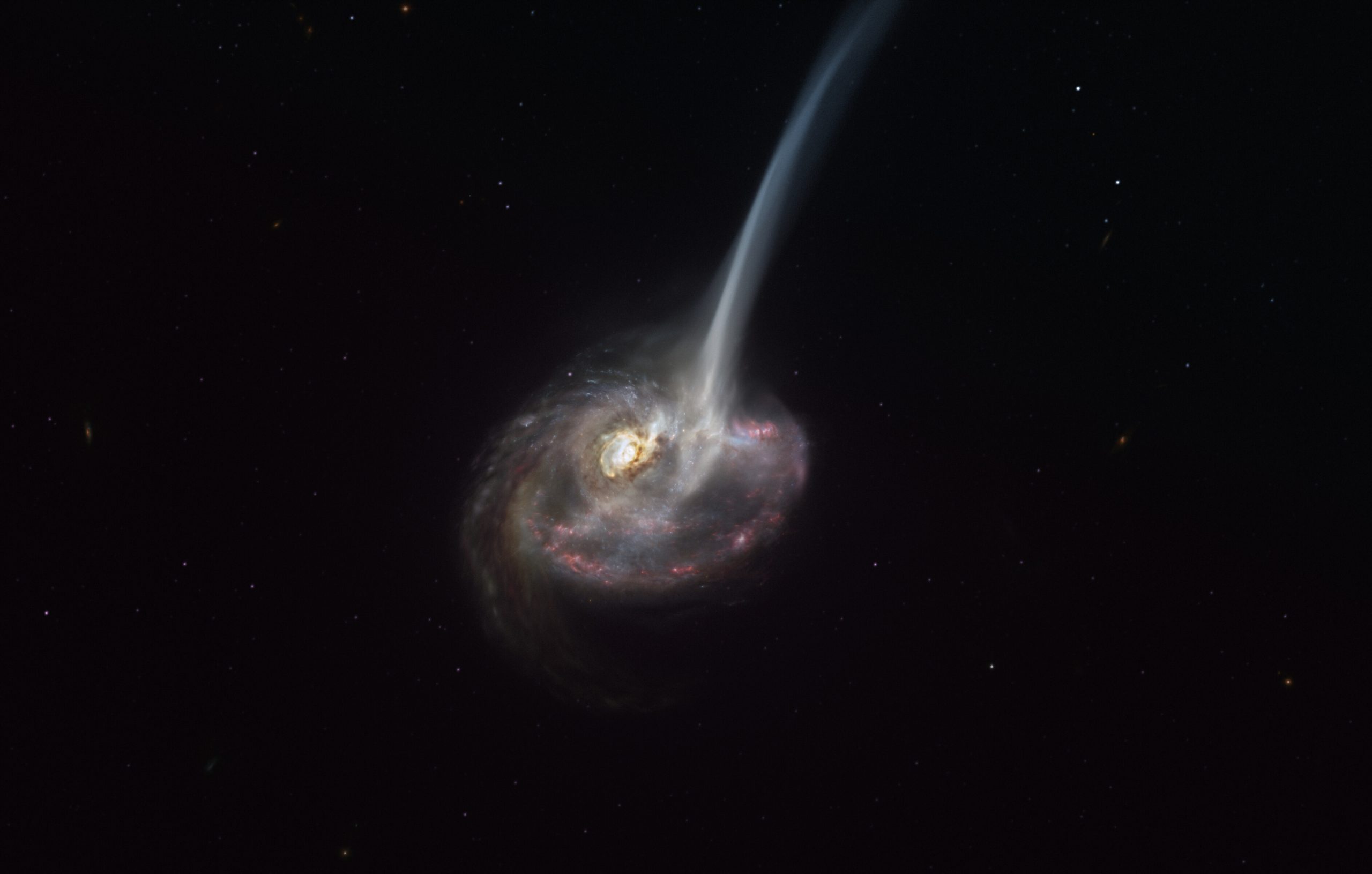 This artist’s impression of ID2299 shows the galaxy, the product of a galactic collision, and some of its gas being ejected by a “tidal tail” as a result of the merger. New observations made with ALMA have captured the earliest stages of this ejection, before the gas reached the very large scales depicted in this artist’s impression. Credit: ESO/M. Kornmesser

Galaxies begin to “die” when they stop forming stars, but until now astronomers had never clearly glimpsed the start of this process in a far-away galaxy. Using the Atacama Large Millimeter/submillimeter Array (ALMA), in which the European Southern Observatory (ESO) is a partner, astronomers have seen a galaxy ejecting nearly half of its star-forming gas. This ejection is happening at a startling rate, equivalent to 10 000 Suns-worth of gas a year — the galaxy is rapidly losing its fuel to make new stars. The team believes that this spectacular event was triggered by a collision with another galaxy, which could lead astronomers to rethink how galaxies stop bringing new stars to life. ...

The gas ejection is happening at a rate equivalent to 10 000 Suns per year, and is removing an astonishing 46% of the total cold gas from ID2299. Because the galaxy is also forming stars very rapidly, hundreds of times faster than our Milky Way, the remaining gas will be quickly consumed, shutting down ID2299 in just a few tens of million years.

The event responsible for the spectacular gas loss, the team believes, is a collision between two galaxies, which eventually merged to form ID2299. The elusive clue that pointed the scientists towards this scenario was the association of the ejected gas with a “tidal tail”. Tidal tails are elongated streams of stars and gas extending into interstellar space that result when two galaxies merge, and they are usually too faint to see in distant galaxies. However, the team managed to observe the relatively bright feature just as it was launching into space, and were able to identify it as a tidal tail.

Most astronomers believe that winds caused by star formation and the activity of black holes at the centres of massive galaxies are responsible for launching star-forming material into space, thus ending galaxies’ ability to make new stars. However, the new study published today in Nature Astronomy suggests that galactic mergers can also be responsible for ejecting star-forming fuel into space. ...


A Titanic Interstellar Medium Ejection from a Massive Starburst Galaxy at Redshift 1.4 ~ Annagrazia Puglisi et al
Know the quiet place within your heart and touch the rainbow of possibility; be
alive to the gentle breeze of communication, and please stop being such a jerk. — Garrison Keillor
Top
1 post • Page 1 of 1