MPIA: Peering inside the birthplaces of planets orbiting the smallest stars

MPIA: Peering inside the birthplaces of planets orbiting the smallest stars 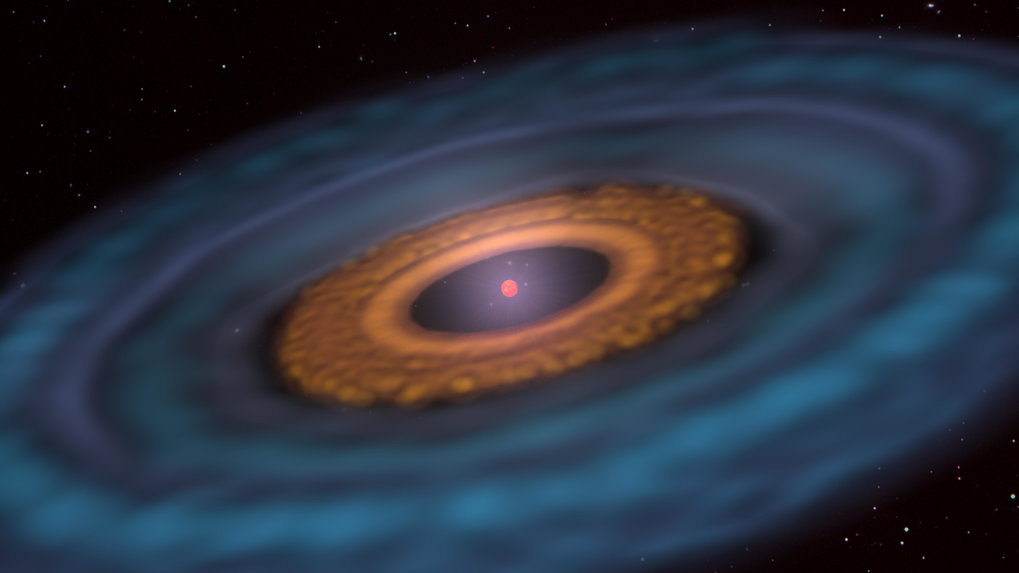 Artistic representation of a planet-forming disk of dust and gas around a very low-mass star (VLMS). The inner dust disk contains a ring structure that indicates the formation of a new planet. The dust disk resides inside a larger gas disk whose thickness increases towards the edge. Credit: MPIA Graphics Dept.

Scientists have been finding ring-like structures indicating planet formation in the disks surrounding young Sun-like stars for several years. Astronomers led by Nicolas Kurtovic from the Max Planck Institute for Astronomy in Heidelberg, Germany, have now detected similar signals in disks of young very low-mass stars that are considerably smaller and less massive than their counterparts. Although these stars represent the vast majority of the stellar population, they only host 10% of the known exoplanets to date, including terrestrial and Jupiter-like planets. While theorists have yet to derive a satisfying model that explains the formation of such giant planets inside the rather low-mass disks of the smallest stars, the new results are the beginning of a systematic investigation to solving this mystery.

To date, astronomers have found about 4400 planets in more than 3200 planetary systems around stars other than the Sun. These numbers are biased, because only about 10% of the known exoplanets orbit so-called Red Dwarfs, although these stars make up for roughly three-quarters of the stellar population in the Milky Way. Red Dwarfs are the least massive, smallest and coolest stars that exist. They are extremely faint compared to most known planet harbouring stars, making them very hard to capture and investigate.

For all the same reasons, astronomers only know little about the processes that form planets in the disks made of gas and dust surrounding them at a young age. To improve our understanding, a team led by Nicolas Kurtovic, a PhD student at the Max Planck Institute for Astronomy (MPIA) in Heidelberg, Germany, has now mapped and analysed six such disks around young very low-mass stars (VLMS) with unprecedented detail. VLMS are stars with masses of less than 20% of that of our Sun. ...


Size and structures of disks around very low mass stars in the Taurus star-forming region ~ Nicolas T. Kurtovic et al
Know the quiet place within your heart and touch the rainbow of possibility; be
alive to the gentle breeze of communication, and please stop being such a jerk. — Garrison Keillor
Top
1 post • Page 1 of 1