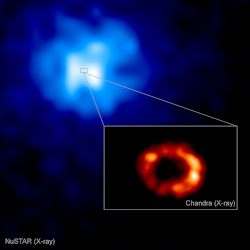 
Thirty four years ago, on February 23, 1987, the world was shaken by the explosion of a massive blue star in the Large Magellanic Cloud, one of the more massive of the Milky Way's current set of satellite galaxies. This was the nearest such star explosion seen in over 400 years. The LMC lies at a distance of 170,000 lightyears from earth, so that the actual explosion took place about 170,000 years before 1987. This event was a real watershed, the first opportunity to study, with with modern astronomical instruments, the details of a "core collapse" supernova, an unbelievably powerful stellar explosion produced by the formation of an iron core at the center of a massive star. This explosion produced, for a short while, about as much radiation as the rest of the LMC, and even produced a burst of sub-atomic neutrinos, which was detected on earth, helping to usher in a new era of "multi-messenger" astrophysics and confirm theories of core-collapse supernovae. Since 1987, astronomers have been monitoring the evolution of the shock of radiation and matter produced in the explosion. In addition to producing an extended, hot glowing supernova remnant, core-collapse supernovae are expected to leave behind the dead core of the progenitor star, an ultradense neutron star or a singular black hole, but despite more than 30 years of careful study, this collapsed object has frustratingly escaped detection. Until, perhaps, this year. Using archived X-ray images of SN 1987A, and other data, from the Chandra X-ray Observatory and the NuSTAR high energy X-ray observatory, astronomers believe they have detected the first clue of the presence of the collapsed stellar core. The NuSTAR image, in blue above, shows extended high energy emission from SN 1987A, while Chandra, with its high resolution cameras, details the extended ring of hot gas produced by the ejecta from the explosion, stretching about a lightyear in all directions. Comparison of the X-ray data from NuSTAR and Chandra reveal unusual energy emission which is believed to be produced by the magnetically-driven wind from a tiny, newborn neutron star near the center of the X-ray emitting ring. This provides an exquisite opportunity to examine the properties of a new neutron star, and to see how it will cool and evolve with time over the next few centuries, and beyond.


CXC: SN 1987A: Reclusive Neutron Star May Have Been Found in Famous Supernova

CXC: Reclusive Neutron Star May Have Been Found

Astronomers have found evidence for the existence of a neutron star at the center of Supernova 1987A (SN 1987A), which scientists have been seeking for over three decades. As reported in our latest press release, SN 1987A was discovered on February 24, 1987. The panel on the left contains a 3D computer simulation, based on Chandra data, of the supernova debris from SN 1987A crashing into a surrounding ring of material. The artist's illustration (right panel) depicts a so-called pulsar wind nebula, a web of particles and energy blown away from a pulsar, which is a rotating, highly magnetized neutron star. Data collected from NASA's Chandra X-ray Observatory and NuSTAR in a new study support the presence of a pulsar wind nebula at the center of the ring.

If this result is upheld by future observations, it would confirm the existence of a neutron star in SN 1987A, the collapsed core that astronomers expect would be present after the star exploded. The pulsar would also be the youngest one ever found.


Indication of a Pulsar Wind Nebula in the Hard X-Ray Emission from SN 1987A ~ Emanuele Greco et al
Know the quiet place within your heart and touch the rainbow of possibility; be
alive to the gentle breeze of communication, and please stop being such a jerk. — Garrison Keillor
Top

The relationship between the inner world and outer world always peaks my curiosity when science tries to unravel their makeup.

Fred the Cat wrote: ↑Wed Mar 03, 2021 3:27 pm The relationship between the inner world and outer world always peaks my curiosity when science tries to unravel their makeup.

I find it hard to wrap my head around around quantum mechanics, but your first link is truly fascinating. I didn't realize that there is antimatter inside protons!

There is a truly amazing video that illustrates this article. Yes, that's the inner workings of a proton!

Do check it out!