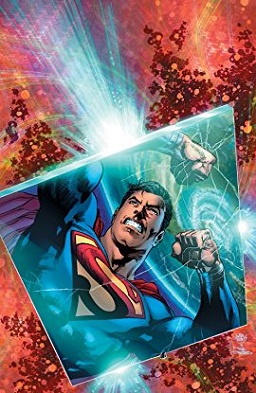 Superman trapped in the Phantom Zone (by Ivan Reis.)

The Phantom Zone was a "pocket universe" discovered by Jor-El that existed outside the space-time continuum; it was used on the planet Krypton as a humane method of imprisoning criminals. Kryptonians had abolished the death penalty in the long distant past. In more recent history, criminals were punished by being sealed into capsules and rocketed into orbit in suspended animation with crystals attached to their foreheads to slowly erase their criminal tendencies; Klax-Ar was one criminal who received this punishment but escaped. Gra-Mo was the last to suffer the punishment, for it was then abolished in favor of the Zone.

The inmates of the Phantom Zone reside in a ghost-like state of existence from which they can observe, but cannot interact with, the regular universe. Inmates do not age or require sustenance in the Phantom Zone; furthermore, they are telepathic and mutually insubstantial. As such, they were able to survive the destruction of Krypton and focus their attention on Earth, as most of the surviving Kryptonians now reside there. Most have a particular grudge against Superman because his father created the method of their damnation, and was often the prosecutor at their trials. When they manage to escape, they usually engage in random destruction, particularly easy for them since, on Earth, each acquire the same powers as Superman.>>

The sheer scale of the Solar System makes this a staggering challenge. We barely see things that pass close to Earth. If I recall correctly, we spotted a rogue asteroid a few years ago after it passed Earth.
Top

AGU: ‘Oumuamua is likely a piece of a Pluto-like planet


Click to play embedded YouTube video.
The first known interstellar object to pass through our solar system is likely a piece of a Pluto-like planet from another solar system, according to a new study published as a pair of papers ...

The results may help scientists learn about the stuff exoplanets are made of and the evolution of solar systems beyond our own. ...

Discovered in 2017 via the Pan-STARRS astronomical observatory in Hawaii, 1I/2017 U1 ‘Oumuamua, meaning ‘scout’ or ‘messenger’ in Hawaiian, hurtled past at 87.3 kilometers per second (196,000 miles per hour). The weirdly flat object was like a comet, but with features that were just odd enough to defy classification.

‘Oumuamua’s characteristics suggest it is likely made of solid nitrogen, like the surface of Pluto, according to the authors. ...

1I/'Oumuamua as an N2 Ice Fragment of an exo-Pluto Surface:
viewtopic.php?t=40910
viewtopic.php?t=37698
Know the quiet place within your heart and touch the rainbow of possibility; be
alive to the gentle breeze of communication, and please stop being such a jerk. — Garrison Keillor
Top
4 posts • Page 1 of 1