The Universe is mostly studied by measuring the amount and type of radiation emitted by massive objects in space. But the Universe can also be studied by the "gravitational radiation", or "gravitational waves" that objects emit. Gravitational waves were predicted by Einstein and are caused by the acceleration of massive bodies, similar to the way that electromagnetic waves are produced by the acceleration of electrically charged bodies. But gravitational waves are waves in the ocean of spacetime itself, stretching and compressing both space and time as they pass by. The recent spectacular detections of gravitational waves by LIGO, and the smashing success of the LISA Pathfinder mission have accelerated interest in a space-based gravitational wave detector. The Laser Interferometry Space Antenna mission, or LISA, is currently under development by the European Space Agency and NASA. LISA consists of 3 spacecraft flying in a triangular formation, each separated by 2.5 million kilometers, following the earth in its orbit around the sun. Gravitational waves that pass by earth will change the distances between the spacecraft, and let astronomers measure the strength and direction of the source of the gravitational radiation. The picture above shows one of the LISA spacecraft, connected to its two partner ships by laser beams which are used to measure precisely the separations of the spaceships. LISA is currently expected to launch in the 2030's. 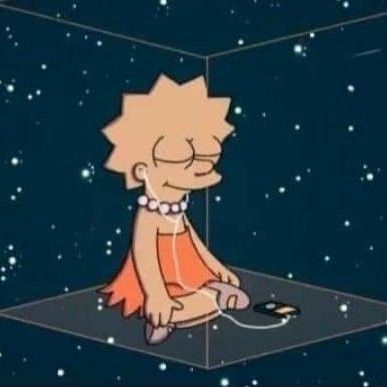 LISA & the Wiggling Universe? I got all sorts of images in my head after reading that, all of them relating to Lisa Simpson!

Hope I am allowed to use them! 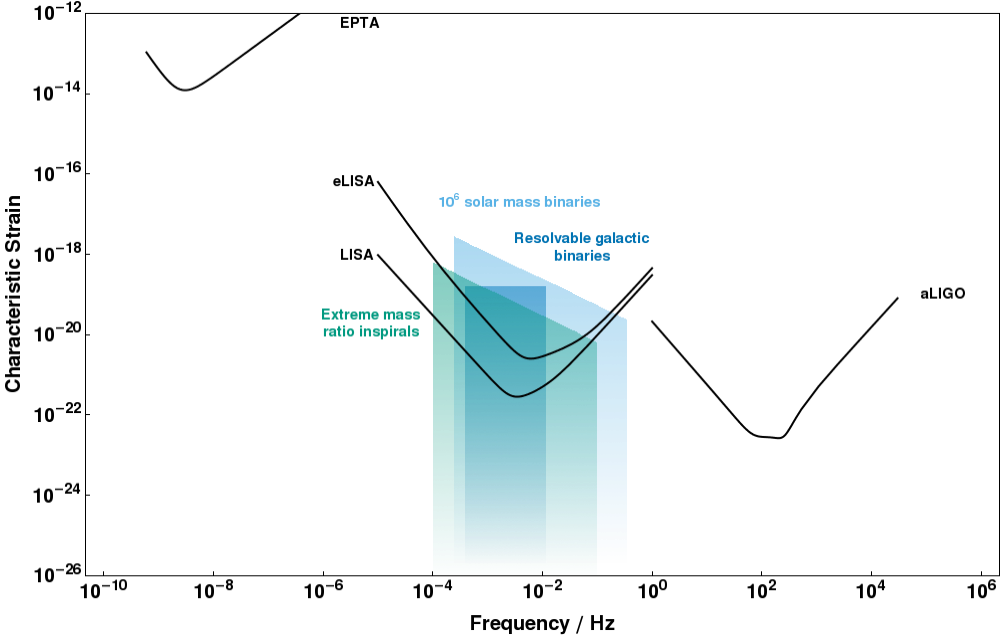 Detector noise curves for LISA and eLISA as a function of frequency. They lie in between the bands for ground-based detectors like Advanced LIGO (aLIGO) and pulsar timing arrays such as the European Pulsar Timing Array (EPTA). The characteristic strain of potential astrophysical sources are also shown.


<<LISA will be able to detect the nearly monochromatic gravitational waves emanating of close binaries consisting of two compact stellar objects (white dwarfs, neutron stars, and black holes) in the Milky Way. At low frequencies these are actually expected to be so numerous that they form a source of (foreground) noise for LISA data analysis. At higher frequencies LISA is expected to detect and resolve around 25,000 galactic compact binaries. Studying the distribution of the masses, periods, and locations of this population, will teach us about the formation and evolution of binary systems in the galaxy. Furthermore, LISA will be able to resolve 10 binaries currently known from electromagnetic observations (and find ≈500 more with electromagnetic counterparts within one square degree). Joint study of these systems will allow inference on other dissipation mechanisms in these systems, e.g. through tidal interactions. One of the currently known binaries that LISA will be able to resolve is the white dwarf binary ZTF J1539+5027 with a period of 6.91 minutes, the second shortest period binary white dwarf pair discovered to date.

LISA will be able to detect the gravitational waves from the merger of a pair of (super)massive black holes with a chirp mass between 103 and 107 solar masses all the way back to their earliest formation at redshift around z ≈ 15. The most conservative population models expect at least a few such events to happen each year. For mergers closer by (z < 3), it will be able to determine the spins of the components, which carry information about the past evolution of the components (e.g. whether they have grown primarily through accretion or mergers). For mergers around the peak of star formation (z ≈ 2) LISA will be able to locate mergers within 100 square degrees on the night sky at least 24 hours before the actual merger, allowing electromagnetic telescopes to search for counterparts, with the potential of witnessing the formation of a quasar after a merger.

Extreme mass ratio inspirals (EMRIs) consist of a stellar compact object (<60 solar masses) on a slowly decaying orbit around a massive black hole of around 105 solar masses. For the ideal case of a prograde orbit around a (nearly) maximally spinning black hole, LISA will be able to detect these events up to z = 4. EMRIs are interesting because they are slowly evolving, spending around 105 orbits and between a few months and a few years in the LISA sensitivity band before merging. This allows very accurate (up to an error of 1 in 104) measurements of the properties of the system, including the mass and spin of the central object and the mass and orbital elements (eccentricity and inclination) of the smaller object. EMRIs are expected to occur regularly in the centers of most galaxies and in dense star clusters. Conservative population estimates predict at least one detectable event per year for LISA.

Following the announcement of the first gravitational wave detection, GW150914, it was realized that a similar event would be detectable by LISA well before the merger. Based on the LIGO estimated event rates, it is expected that LISA will detect and resolve about 100 binaries that would merge a few weeks to months later in the LIGO detection band. LISA will be able to accurately predict the time of merger ahead of time and locate the event with 1 square degree on the sky. This will greatly aid the possibilities for searches for electromagnetic counterpart events.>>

The space time continuum should noticeably buckle under Homer's feet and ripple when he walks.
Art Neuendorffer
Top
6 posts • Page 1 of 1