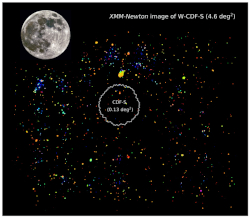 
Black holes, cosmically speaking, are tiny objects. Even the largest of them would comfortably fit (maybe uncomfortably is a better adverb) within the confines of our Solar System. But surprisingly, these tiny regions in space have far-flung impact. Astrophysicists have shown, for example, a direct correlation between masses of stars in galaxies and their supermassive, central black holes, suggesting a connection between the supermassive black hole and galactic properties more than a billion times larger. Tiny, supermassive black holes are also believed to play a crucial role in keeping the gas between galaxies from catastrophically cooling, influencing space on even grander scales. But understanding the physical connection, and understanding how these supermassive black holes are formed in the first place, is a daunting task. X-ray observations play a key role, since growing supermassive black holes at the centers of galaxies produce lots of X-rays. Scientists have adopted two approaches so far: very deep X-ray observations of small areas of space, and more shallow X-ray studies over much wider regions. Deep studies have been important to probe the X-ray faint black holes but are restricted to a particular direction which may not necessarily be representative of the Universe as a whole. Shallow surveys sample a more representative region of the Universe, but not the X-ray faint black hole population. A new survey, called the XMM-Spitzer Extragalactic Representative Volume Survey (XMM-SERVS), is adopting a middle ground: a fairly deep study using the XMM-Newton X-ray space telescope to take observations of a fairly wide region of space. XMM-SERVS will study three widely separated sky fields that have previously been studied at multiple wavelengths, so there's lots of supporting data. The image above shows one of the fields being studied by XMM-SERVS, the so-called Wide Chandra Deep Field South. The full moon is superimposed on this region to show the relatively wide area of the W-CDF-S field. The colored points of light are known supermassive black holes color-coded by X-ray energy (blue: high energy; red: low energy). The white outline shows the area of the Chandra Deep Field-South, an important deep-but-narrow X-ray survey. The XMM-SERVS survey will detect more than 10,000 accreting supermassive black holes, and will provide a resource for study of the growth, development and influence of black holes for years to come.