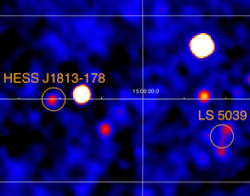 
Among the violent objects currently observed in the Universe, the "TeV sources" are at or near the very top of the list. These TeV sources produce radiation in the tera-electron volt energy range, which is near the uppermost energy band in the electromagnetic spectrum, about a billion times more energetic than visible light. TeV sources are detected using ground-based telescopes by looking for the faint glow of light from showers of relativistic subatomic particles produced when these high-energy photons hit earth's atmosphere. To understand the mysterious physical processes which power these TeV sources, scientists use large scale maps of the sky at hard X-ray and gamma-ray energies. Such maps are important since X-ray and gamma-ray maps are very good at pinpointing the extreme types of objects that are hard to find in optical sky maps. The International Gamma-Ray Astrophysics Laboratory (more commonly referred to as INTEGRAL) is a space telescope designed to explore the hard X-ray and gamma-ray sky. It does this by detecting the X-ray and gamma-ray shadows cast by stars, black holes, neutron stars, galaxies, and remnants of stellar explosions over large regions of the sky. INTEGRAL has been exploring the high-energy sky since its launch in October 2002, and so has built up an impressive archive of sky maps and other data, extremely useful when hunting TeV source counterparts. The image above shows a false-color map in hard X-rays of the disk of the Milky Way as observed by INTEGRAL. The marked sources are some of the detected TeV sources. Many of theses detected TeV sources have INTEGRAL source counterparts, confirming them as known galactic and extra-galactic black holes (and other types of identified, extreme objects). Interestingly, a good fraction of these TeV sources remain unclassified, and are still to be conclusively identified.