A team of astronomers has released new observations of nearby galaxies that resemble colourful cosmic fireworks. The images, obtained with the European Southern Observatory’s Very Large Telescope (ESO’s VLT), show different components of the galaxies in distinct colours, allowing astronomers to pinpoint the locations of young stars and the gas they warm up around them. By combining these new observations with data from the Atacama Large Millimeter/submillimeter Array (ALMA), in which ESO is a partner, the team is helping shed new light on what triggers gas to form stars. 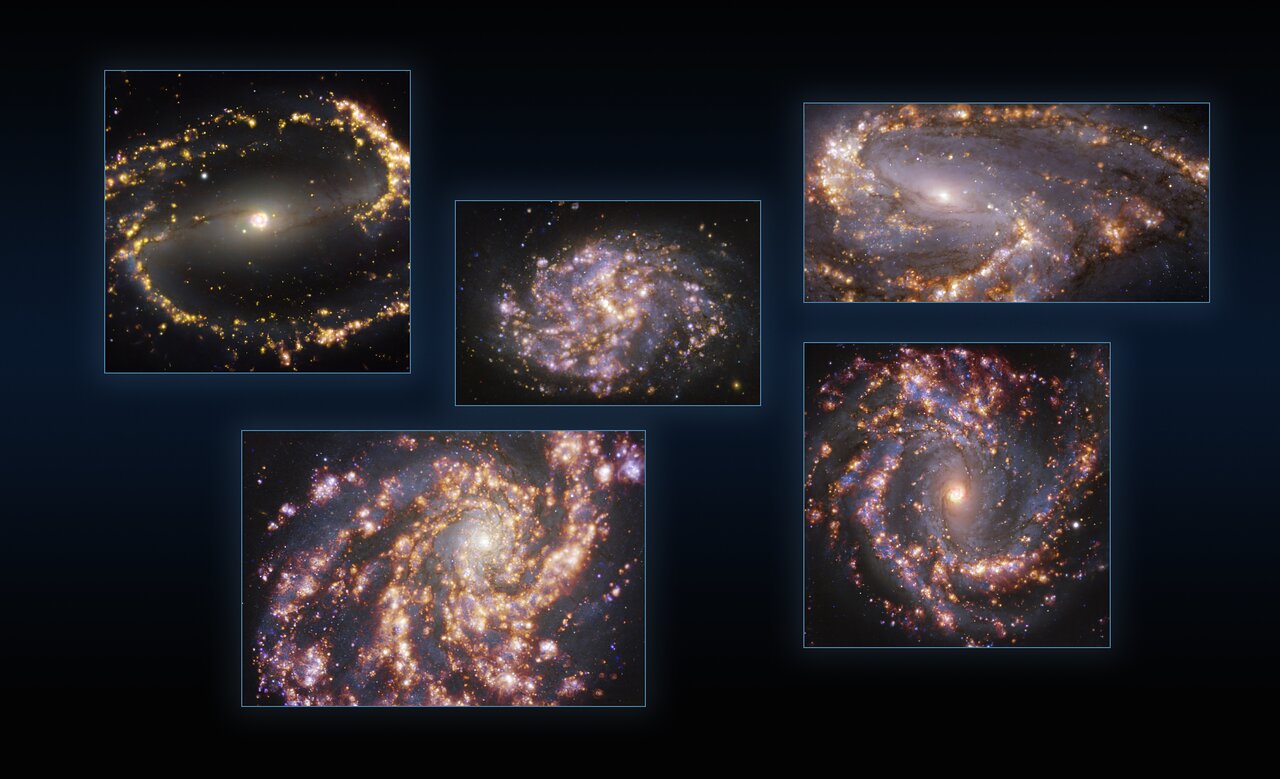 This image combines observations of the nearby galaxies NGC 1300, NGC 1087, NGC
3627 (top, from left to right), NGC 4254 and NGC 4303 (bottom, from left to right)
taken with the Multi-Unit Spectroscopic Explorer (MUSE) on ESO’s VLT. Each individual
image is a combination of observations conducted at different wavelengths of light to
map stellar populations and warm gas. The golden glows mainly correspond to clouds
of ionised hydrogen, oxygen and sulphur gas, marking the presence of newly born stars,
while the bluish regions in the background reveal the distribution of slightly older stars.

The images were taken as part of the Physics at High Angular resolution in Nearby
GalaxieS (PHANGS) project, which is making high-resolution observations of nearby
galaxies with telescopes operating across the electromagnetic spectrum.
Astronomers know that stars are born in clouds of gas, but what sets off star formation, and how galaxies as a whole play into it, remains a mystery. To understand this process, a team of researchers has observed various nearby galaxies with powerful telescopes on the ground and in space, scanning the different galactic regions involved in stellar births.

“For the first time we are resolving individual units of star formation over a wide range of locations and environments in a sample that well represents the different types of galaxies,” says Eric Emsellem, an astronomer at ESO in Germany and lead of the VLT-based observations conducted as part of the Physics at High Angular resolution in Nearby GalaxieS (PHANGS) project. “We can directly observe the gas that gives birth to stars, we see the young stars themselves, and we witness their evolution through various phases.”

Emsellem, who is also affiliated with the University of Lyon, France, and his team have now released their latest set of galactic scans, taken with the Multi-Unit Spectroscopic Explorer (MUSE) instrument on ESO’s VLT in the Atacama Desert in Chile. They used MUSE to trace newborn stars and the warm gas around them, which is illuminated and heated up by the stars and acts as a smoking gun of ongoing star formation.

The new MUSE images are now being combined with observations of the same galaxies taken with ALMA and released earlier this year. ALMA, which is also located in Chile, is especially well suited to mapping cold gas clouds — the parts of galaxies that provide the raw material out of which stars form.

By combining MUSE and ALMA images astronomers can examine the galactic regions where star formation is happening, compared to where it is expected to happen, so as to better understand what triggers, boosts or holds back the birth of new stars. The resulting images are stunning, offering a spectacularly colourful insight into stellar nurseries in our neighbouring galaxies. ...


Cosmic Fireworks Reveal Newborn Stars (ESOcast Light 239)
Know the quiet place within your heart and touch the rainbow of possibility; be
alive to the gentle breeze of communication, and please stop being such a jerk. — Garrison Keillor
Top

Re: PHANGS Galactic Fireworks: Stunning New Features of Nearby Galaxies