NASA’s Hubble Space Telescope is back in business, exploring the universe near and far. The science instruments have returned to full operation, following recovery from a computer anomaly that suspended the telescope’s observations for more than a month. 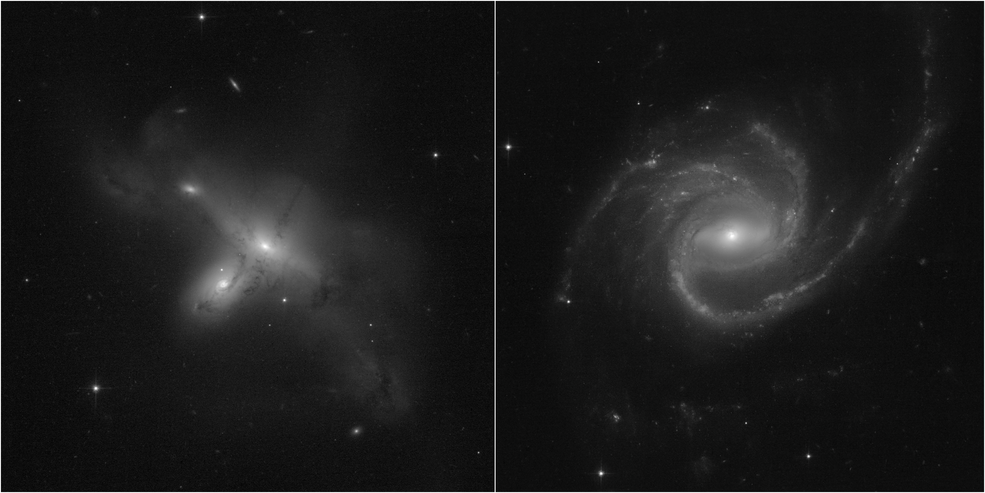 These images, from a program led by Julianne Dalcanton of the University of Washington in Seattle, demonstrate Hubble's return to full science operations. [Left] ARP-MADORE2115-273 is a rarely observed example of a pair of interacting galaxies in the southern hemisphere. [Right] ARP-MADORE0002-503 is a large spiral galaxy with unusual, extended spiral arms. While most disk galaxies have an even number of spiral arms, this one has three. Credits: Science: NASA, ESA, STScI, Julianne Dalcanton (UW) Image processing: Alyssa Pagan (STScI)

Science observations restarted the afternoon of Saturday, July 17. The telescope’s targets this past weekend included the unusual galaxies shown in the images above. ...

These snapshots, from a program led by Julianne Dalcanton of the University of Washington in Seattle, feature a galaxy with unusual extended spiral arms and the first high-resolution glimpse at an intriguing pair of colliding galaxies. Other initial targets for Hubble included globular star clusters and aurorae on the giant planet Jupiter.

Hubble’s payload computer, which controls and coordinates the observatory’s onboard science instruments, halted suddenly on June 13. When the main computer failed to receive a signal from the payload computer, it automatically placed Hubble’s science instruments into safe mode. That meant the telescope would no longer be doing science while mission specialists analyzed the situation.

The Hubble team moved quickly to investigate what ailed the observatory, which orbits about 340 miles (547 kilometers) above Earth. Working from mission control at NASA’s Goddard Space Flight Center in Greenbelt, Maryland, as well as remotely due to COVID-19 restrictions, engineers collaborated to figure out the cause of the problem.

Complicating matters, Hubble was launched in 1990 and has been observing the universe for over 31 years. To fix a telescope built in the 1980s, the team had to draw on the knowledge of staff from across its lengthy history. ...


Hubble Returns to Science Operations
ESA Hubble | 2021 Jul 19
Know the quiet place within your heart and touch the rainbow of possibility; be
alive to the gentle breeze of communication, and please stop being such a jerk. — Garrison Keillor
Top

Re: First Images from Rebooted Hubble

As you can see, astronomy sometimes just for nerds
who went to school with slide rulers hanging from their belt.
Art Neuendorffer
Top
2 posts • Page 1 of 1