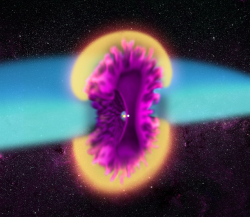 
Nova explosions happen in binary star systems, in which one star is a mostly normal type of star, but the other has run out of fuel and is now as a superdense, burnt-out, earth-sized cinder of the star's core, a white dwarf. If the white dwarf and the normal companion star are close enough, the white dwarf can gravitationally pull matter from the companion. This stolen, hydrogen-rich material builds up on the surface of the white dwarf, which, if it becomes hot and dense enough, the hydrogen nuclei can suddenly fuse into helium, producing a thermonuclear flash that we can observe as a sudden brightening in the sky. An example of such an outbursting white-dwarf binary system is called V745 Sco Astronomers noticed a sudden brightening of this binary system in 2014, and, in the nine days before it faded, used powerful telescopes on earth and in space to monitor the outburst, including key observations in the X-ray band by the Chandra X-ray Observatory. The high-resolution Chandra observations showed that most of the hot material produced by the blast was moving towards us, unexpected if the blast wave was distribute evenly around the entire white dwarf. Analysis of the Chandra data and other observations allowed astronomers to produce a 3-D model of the outburst, shown in the image above. The sudden fusion of hydrogen on the surface of the white dwarf produces a blast wave, which is shown in yellow in the model image. The blast ejected about a tenth of an earth mass of material from the white dwarf, which is shown in purple. A thick disk of cooler material around the binary, shown in blue, helps channel the blast above and below the disk. The X-ray observations mean that one side of the disk is tilted towards us, so that we have a much better view of the material moving towards us compared to the material moving away. The data also suggest that, as the debris from the white dwarf strikes the companion and slows down, it produces a cavity around the two stars. If an accreting white dwarf gains enough material, the entire white dwarf will suddenly burst into a thermonuclear fireball, producing not a nova but a far more powerful supernova. These exploding white dwarf supernovae are very useful to astronomers for studies of the distant Universe, since they all have about the same brightness and can be viewed to enormous distances because they are so powerful. The analysis of V745 Sco shows that the amount of material ejected is less than the amount that produced the nova outburst, showing that there's a net gain of material in V745 Sco, pushing it a little closer to the day when it will explode as a supernova. 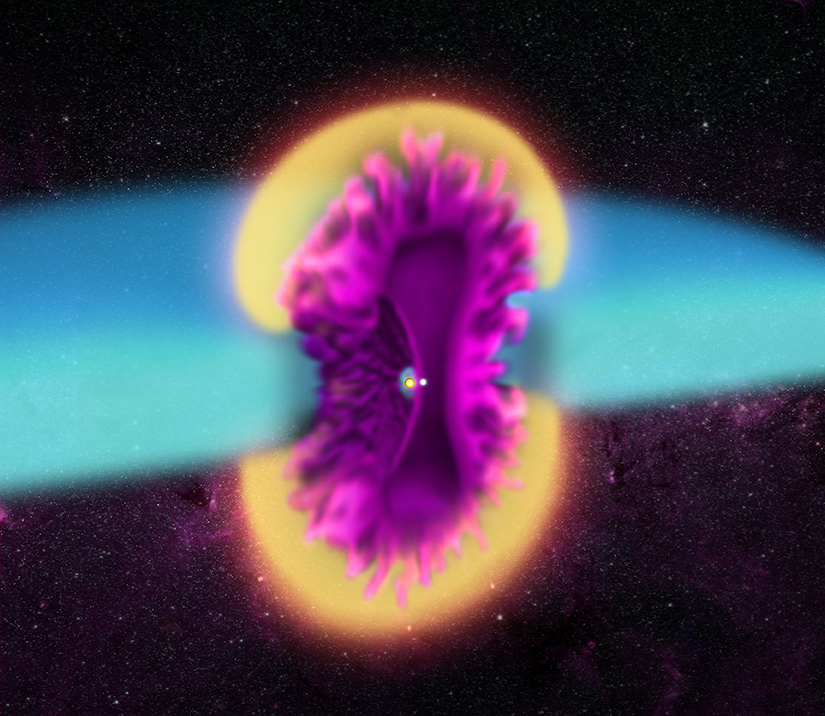 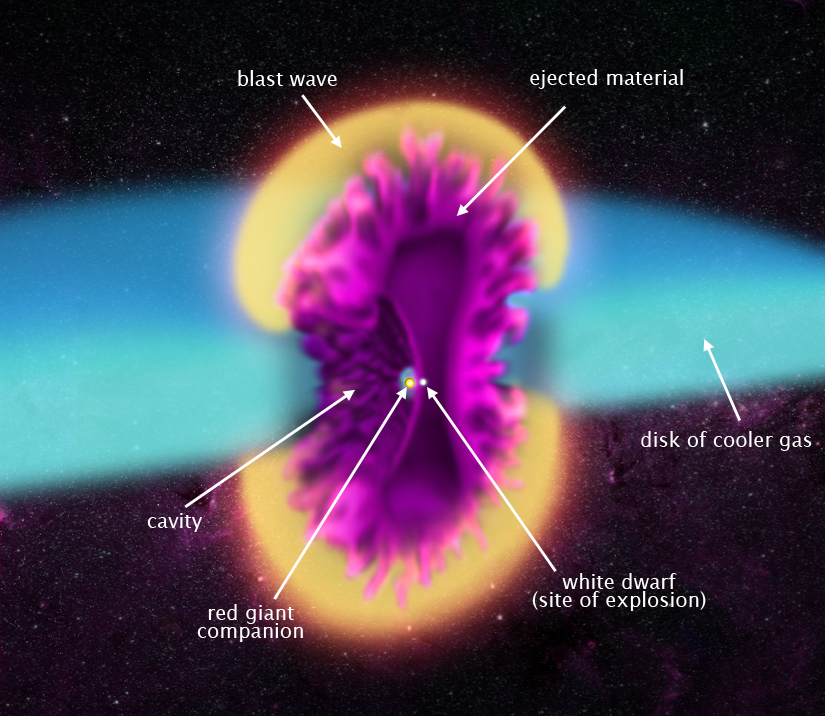 3D Model of V745 Sco ~ Illustration: NASA/CXC/M.Weiss;
3D Model: INAF-Osservatorio Astro. di Palermo/S.Orlando
For decades, astronomers have known about irregular outbursts from the double star system V745 Sco, which is located about 25,000 light years from Earth. Astronomers were caught by surprise when previous outbursts from this system were seen in 1937 and 1989. When the system erupted on February 6, 2014, however, scientists were ready to observe the event with a suite of telescopes including NASA’s Chandra X-ray Observatory.

V745 Sco is a binary star system that consists of a red giant star and a white dwarf locked together by gravity. These two stellar objects orbit so closely around one another that the outer layers of the red giant are pulled away by the intense gravitational force of the white dwarf. This material gradually falls onto the surface of the white dwarf. Over time, enough material may accumulate on the white dwarf to trigger a colossal thermonuclear explosion, causing a dramatic brightening of the binary called a nova. Astronomers saw V745 Sco fade by a factor of a thousand in optical light over the course of about 9 days.

Astronomers observed V745 Sco with Chandra a little over two weeks after the 2014 outburst. Their key finding was it appeared that most of the material ejected by the explosion was moving towards us. To explain this, a team of scientists ... constructed a three-dimensional (3D) computer model of the explosion, and adjusted the model until it explained the observations. In this model they included a large disk of cool gas around the equator of the binary caused by the white dwarf pulling on a wind of gas streaming away from the red giant. ...


Origin of asymmetries in X-ray emission lines from the
blast wave of the 2014 outburst of nova V745 Sco ~ S. Orlando et al
Know the quiet place within your heart and touch the rainbow of possibility; be
alive to the gentle breeze of communication, and please stop being such a jerk. — Garrison Keillor
Top

Tarini Konchady wrote:
Type Ia supernovae are a cornerstone of extragalactic distance measurements, so it’s important that we understand them very well. Right now, we’re fairly certain that Type Ia supernovae are the result of white dwarfs exploding. But how they explode is still an open question.


Non-Local Thermodynamic Equilibrium Radiative Transfer Simulations
of Sub-Chandrasekhar-Mass White Dwarf Detonations ~ Ken J. Shen et al
Know the quiet place within your heart and touch the rainbow of possibility; be
alive to the gentle breeze of communication, and please stop being such a jerk. — Garrison Keillor
Top

https://en.wikipedia.org/wiki/Type_Ia_supernova wrote:
<<A type Ia supernova (read: "type one-A") is a type of supernova that occurs in binary systems (two stars orbiting one another) in which one of the stars is a white dwarf. The other star can be anything from a giant star to an even smaller white dwarf. Physically, carbon–oxygen white dwarfs with a low rate of rotation are limited to below 1.44 solar masses (M☉). Beyond this "critical mass", they reignite and in some cases trigger a supernova explosion. Somewhat confusingly, this critical mass is often referred to as the Chandrasekhar mass, despite being marginally different from the absolute Chandrasekhar limit where electron degeneracy pressure is unable to prevent catastrophic collapse. If a white dwarf gradually accretes mass from a binary companion, or merges with a second white dwarf, the general hypothesis is that its core will reach the ignition temperature for carbon fusion as it approaches the Chandrasekhar mass. Within a few seconds of initiation of nuclear fusion, a substantial fraction of the matter in the white dwarf undergoes a runaway reaction, releasing enough energy (1–2 foe = one to two humdred quintillion yottajoules) to unbind the star in a supernova explosion.>>

https://en.wikipedia.org/wiki/Foe_(unit) wrote:
<<A foe is a unit of energy equal to 1044 joules or 1051 ergs, used to express the large amount of energy released by a supernova. An acronym for "[ten to the power of] fifty-one ergs", the term was introduced by Gerald E. Brown of Stony Brook University in his work with Hans Bethe, because "it came up often enough in our work". Without mentioning the foe, Steven Weinberg proposed in 2006 "a new unit called the bethe" (B) with the same value, to "replace" it.

This unit of measure is convenient because a supernova typically releases about one foe of observable energy in a very short period (which can be measured in seconds). In comparison, if the Sun had its current luminosity throughout its entire lifetime, it would release ~1.2 foe. One solar mass has a rest mass energy of 1787 foe.>>